I IMAGINE most people barely looked up from their cornflakes at this week’s news that Superdrug will soon be offering Botox, with treatments starting at £99.

After all, in the era of Love Island and social media, we’re all potential celebrities now. Even those of us who will never hit the big time have an Instagram audience waiting to “like” our every selfie.

Beauty store Superdrug will soon be offering Botox, with treatments starting at £99[/caption]

So this is just the logical next step towards making cosmetic surgery available to the masses, rather than the few.

Some have argued that Superdrug Botox is actually a good thing, because it bridges the gap between the elite Harley Street options — where you pay several hundred pounds for an appointment with an “aesthetic doctor” — and the more backstreet treatments carried out by hairdressers with just a few hours of training.

I disagree. Being able to buy a syringe or two of Botox when you are out shopping for your hairspray legitimises — and normalises — the act of injecting poison in your skin in the name of beauty.

Being able to buy Botox over the counter, so to speak, makes it seem like no big deal — just another tick in the “maintenance” box, and as reasonable as tinting your lashes or getting your ears pierced.

And that is the problem. All decisions we make about our appearance boil down to personal choice. And if it makes someone feel better to tinker cosmetically or surgically with their natural looks, that’s their choice. No one should judge them for it.

But there is a wider problem.

Increasingly, women think that whatever they look like naturally isn’t good enough. More and more, the “solution” is invasive cosmetic enhancement.

A mainstream shop making Botox available for less than 100 quid is surely only going to add to the pressure some women feel to change their appearance using more than just make-up.

Superdrug presents itself as responsible because it will refuse to treat under-25s, when other clinics will.

That is shocking — not so much that some clinics WILL treat under-25s but that anyone so young could think they need Botox.

You can’t blame Superdrug for this epidemic. It is simple supply and demand.

The question is: Why the growing desire among women to look frozen?

It’s not like you can get away with saying you’ve not had it when you have, because it’s so obvious.

I’ve got a friend whose husband jokes that she needs to hold up little signs saying “happy” or “angry” when she feels an emotion, since her face is so paralysed by botulism.

While I’m a big believer in your body, your choice, I’m also a believer in scratching the right itch.

The truth is if you feel good about yourself, you look good. If you feel bad and lack confidence, nothing, no amount of Botox or fillers, will ever change that.

Megan from Love Island admitted that she is still insecure after spending £40,000 on surgery[/caption]

Just look at Meg from Love Island, above, who, even after an estimated £40,000 worth of plastic surgery, is still massively insecure.

The problem is our society tends to give far too much weight to the outside. That is especially the case for women, but increasingly for men, too.

I realise all of this is easy to say, harder to act on. I’m as susceptible as the next person to comparing myself with ­others more beautiful — and possibly more airbrushed — and finding myself lacking.

I’m just glad that, when that happens, I know the thing that will make me feel better is far more likely to be self-acceptance than Botox.

After all, if you tighten a prune you don’t get a grape — you just get a tight prune!

So the really big question is, how to achieve self-acceptance when we are surrounded by all these images of perfection?

Well, we are all on our own journey with that one but I’ve got some suggestions which might help.

The first is to focus on what you have, rather than what you don’t. And the second is to never, ever compare yourself to anyone else.

Forget Botox, you can have that advice for free.

We all enjoyed cheering on the Three Lions players that would quickly become our heroes during the World Cup in Russia this summer.

Sadly, those heady days are over and we were reminded of the seamier side of sport this week with the arrest of England rugby union ace Danny Cipriani.

His embarrassing brawl outside a Jersey nightclub came hot on the heels of England cricket’s Ben Stokes’ trial over his clash with two men during a night out.

Stokes was cleared, but what links these sorry sagas is our drinking culture, which dictates that consuming excessive amounts of alcohol is a normal way of letting off steam.

Sportsmen are supposed to be role models, as they influence young people and need to keep themselves in good physical shape.

But as long as we think it is OK to binge and push our bodies to the limits rather than sip a few drinks, then violence, injuries and stupid mistakes will continue to be a regular feature of our nights out.

And if you are an England sports star, then public shame is just one of the tragic consequences – along with the end of your career – that you might have to face.

Cops are as un-PC as the rest

Why should anyone be surprised at the news that sexual harassment in the police force is rife?

Let’s face it, it happens everywhere. So why should the police be any exception?

I thought they might hold themselves to higher standards. But no.

A new survey reveals that dirty jokes, inappropriate touching, leering and being pressured to have sex are daily issues for many police staff.

In a survey of almost 1,800 police staff in England, Wales and Scotland, half had heard sexualised jokes and one in five had received a sexually explicit email or text from a colleague.

Shockingly, one in five had also been touched in a way that made them feel uncomfortable.

Our head of police at West Ham is a woman.

She is smart, tough, brave and would never put up with this type of behaviour.

Part of the problem is that many women accept these actions as “normal” and don’t even know how to object. We must learn to stop putting up with it.

But it is much more important that men learn what is OK and what is not.

A mum’s work is never done

Jacinda Ardern – the Prime Minister of New Zealand, who has continued to work since becoming a mother in June – was criticised this week for “using her baby as a prop” after she was seen breastfeeding her daughter at a public meeting.

I guess whoever coined that phrase has never had the experience of looking after a baby who needs to be fed – right NOW.

Nor will they have dealt with the very loud consequences of that failing to happen.

Instead, what about congratulating Jacinda on doing such a great job of being a working mum?

We said farewell to two legends last week, let’s remember them with this wonderful meme…. 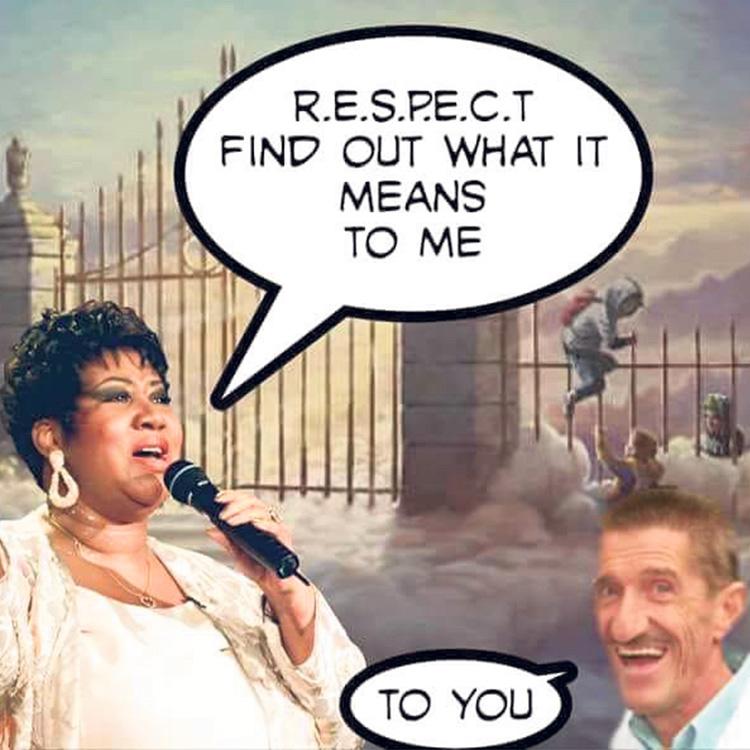 Careers are still a results game

So interesting that the day after A-level results arrived, more than 26,000 university places were still available.

An Ipsos Mori poll found that while most students still think university is “important”, that is down from 86 per cent five years ago to 75 per cent now.

Since a degree is expensive – and no guarantee of a job – you can see why people are questioning the validity of one.

However, there is no viable alternative.

There are just 10,000 degree-level apprenticeships available, compared with 300,000 university places, according to Sir Peter Lampl, of the Sutton Trust.

We need to think how we prepare young people for work and we need more technical qualifications at degree level that offer the chance of a bright future.