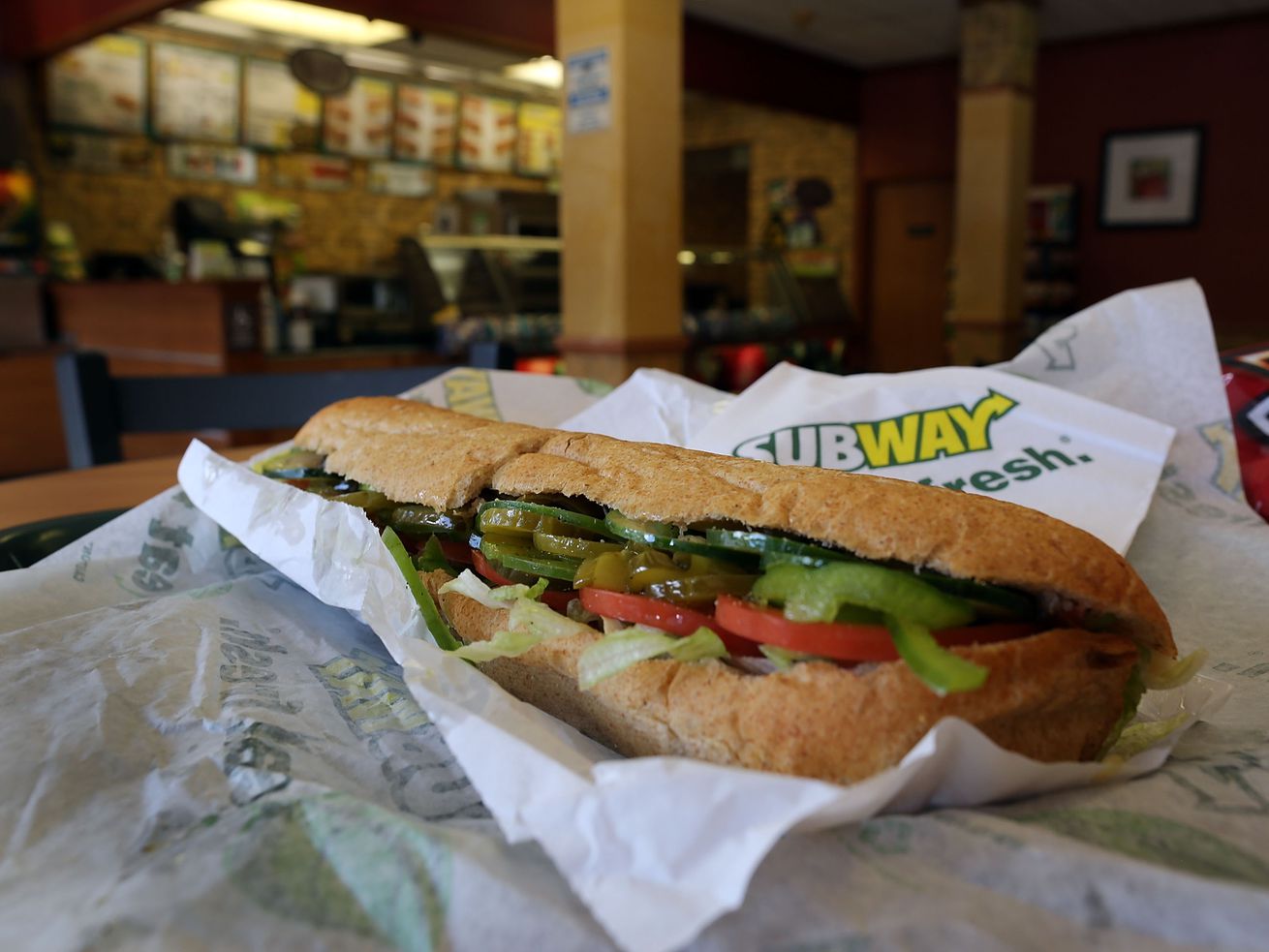 Subway — home of the totally serviceable sandwich — announced on Monday that they were killing the $5 footlong promotion. Kind of.

That doesn’t necessarily mean you will never again pay $5 for a sandwich approximately one-sixth of the height of the average human man. (Technically, the average human man is a little shorter than that — then again, the footlong sandwiches have occasionally been known to be a little short, too). But it does mean that as of this month, it’ll be up to individual franchisees whether or not to run the deal, Subway CEO Trevor Haynes told USA Today in an “exclusive interview.”

Probably, we will all survive. Still, the end of the deal serves as a parable about a changing fast food landscape, requiring classic chains not only to compete with newer, cooler brands, but also to somehow provide consumers with the exact same menu (and prices) they’ve come to expect. It also illustrates the sometimes-fraught relationship between a corporate chain and the people who actually own and operate its franchises.

The $5 footlong was the sandwich of the recession

The $5 footlong was a product of its time.

In 2004, Stuart Frankel, who owned a pair of Miami Subway stores, concocted a plan to offer every footlong sub for $5 on weekends — a dollar or so off the usual price — because business was flagging, and also because he liked round numbers. In March 2008, the chain launched the deal across the country.

“There are only a few times when a chain has been able to scramble up the whole industry, and this is one of them,” Jeffrey T. Davis, president of restaurant consultancy Sandelman and Associates, told BusinessWeek in 2009. It was the poster sandwich for the recession: It was cheap. It was all-American. It was big enough that you could share it “with a co-worker or a friend.” It was seen as relatively healthy, which is mostly to say: It was not fried.

And it was really, really profitable. The chain extended the deal from four weeks to seven weeks. After that, they narrowed the scope — only eight sandwiches would be eligible — but kept the promotion, and soon there were copycats: $5 KFC combos and $5 meals at Boston Market. “Five dollars is the magic number,” a restaurant consultant said at the time.

America’s tastes have changed, too. “While Subway was once the poster child for ‘health fast food,’ consumers have become more aware of the nutritional content of lunch meats and white breads,” said Rachel Hyland, a restaurant industry analyst at IBISWorld.

Meanwhile, competition has only increased.

“There are too many restaurants out there,” said Victor Fernandez, VP of Insights at TDn2K, a customer data company tracking the restaurant industry. “We’re growing chain restaurants at a faster rate than population growth in the country.” We have so many chain restaurants we can’t even produce enough people to eat at them all.

And the drop in sales only puts more pressure on franchisees. “The national promotional focus over the past five years … has decimated [us] and left many franchisees unprofitable and even insolvent,” petitioners complained in a letter to Subway late last year, protesting the revival of the deal. (At the time, Subway told the New York Post most franchisees supported the promo.)

One Northern California franchise owner broke his costs down for the Washington Post. Two dollars for ingredients. Also: labor, utilities, royalties (franchisees give the corporate office a 12 percent cut of weekly sales), credit card fees, and rent. In total, a $5 footlong costs him “well over $4 to produce.”

”The numbers don’t work for us,” he told the Post. “Ten years ago, they might have worked. But now they don’t, in my opinion.”

It seems headquarters has come around. “If you look at California, there’s a very different cost of business than in Arkansas,” Haynes told USA Today.

For budget-oriented cold-cut fans, the end of the $5 footlong is but one more small disappointment of 2018. For many of the chain’s franchisees, who run and finance their own stores, though, the news comes as a relief. When Subway announced they’d be bringing back the $5 footlong for two months this past winter — this time as a menu of five $4.99 footlongs — more than 400 franchisees signed a petition protesting the return of the deal.

This isn’t the first time Subway has ditched the $5 footlong. In 2016, they increased the price of the deal to $6 — not a drastic increase, but enough to have “substantial ramifications,” Hyland said, with many customers taking to social media and other outlets to protest the price increase. In 2018, the price was back down, but it wasn’t enough to lure consumers back into stores.

Despite the drop in profits — revenue was down 1.7 percent in 2016 alone — it’s not like no one’s eating at Subway anymore. In April, the chain tied with Panera for sandwich shop brand of the year, according to the Harris Poll’s 2018 EquiTrend Study. But it’s tough out there for a sandwich shop. The growth of newer fast casual concepts — your salad stores, your burrito bowl outlets — reflects changing priorities. “Individuals are placing higher value on quality of ingredients and general aesthetic over price,” Hyland said.

Fernandez, at TDn2K, has a slightly different read: It isn’t that people don’t care about value anymore, he says. (Right now, for example, Wendy’s is offering a free cheeseburger when you order anything else through the app — people love deals!) The problem is that everybody has a deal. “Value is a given,” he says. Now, it’s about drinks and service and ambiance.

When the footlong deal first launched, a store might run periodic promotions to “bump up sales or traffic,” Fernandez said. In the current landscape, though, you have to have promotions to just stop yourself from losing traffic. But that only translates to an increase in sales if people coming in for the $5 footlong are buying other stuff, too.

Without knowing what percentage of Subway’s current sales are from the footlong promotion, it’s hard to say that’s exactly what’s happening at Subway. But — given that Subway is down 25 percent since 2012, closing 355 stores in 2016 and an estimated 900 more a year later — it’s safe to speculate that perhaps that this winter’s revival of the $5(ish) footlongs was not quite the boon to performance the chain may have hoped.

Here’s the other thing: Subway has been running this promotion, in some form, on and off, for the last decade. And while they’ve played with the details, it has, for the most part, stayed pretty much the same. We like that. Not enough to buy it, but to find its continued existence in the world comforting. Five bucks, a foot of meat-stuffed dough. But costs have gone up. Labor costs have gone up. Health standards have changed. Five dollars in 2008 isn’t the same as $5 in 2018.

It’s a better deal now that it ever was. It is, perhaps, too good for this world.