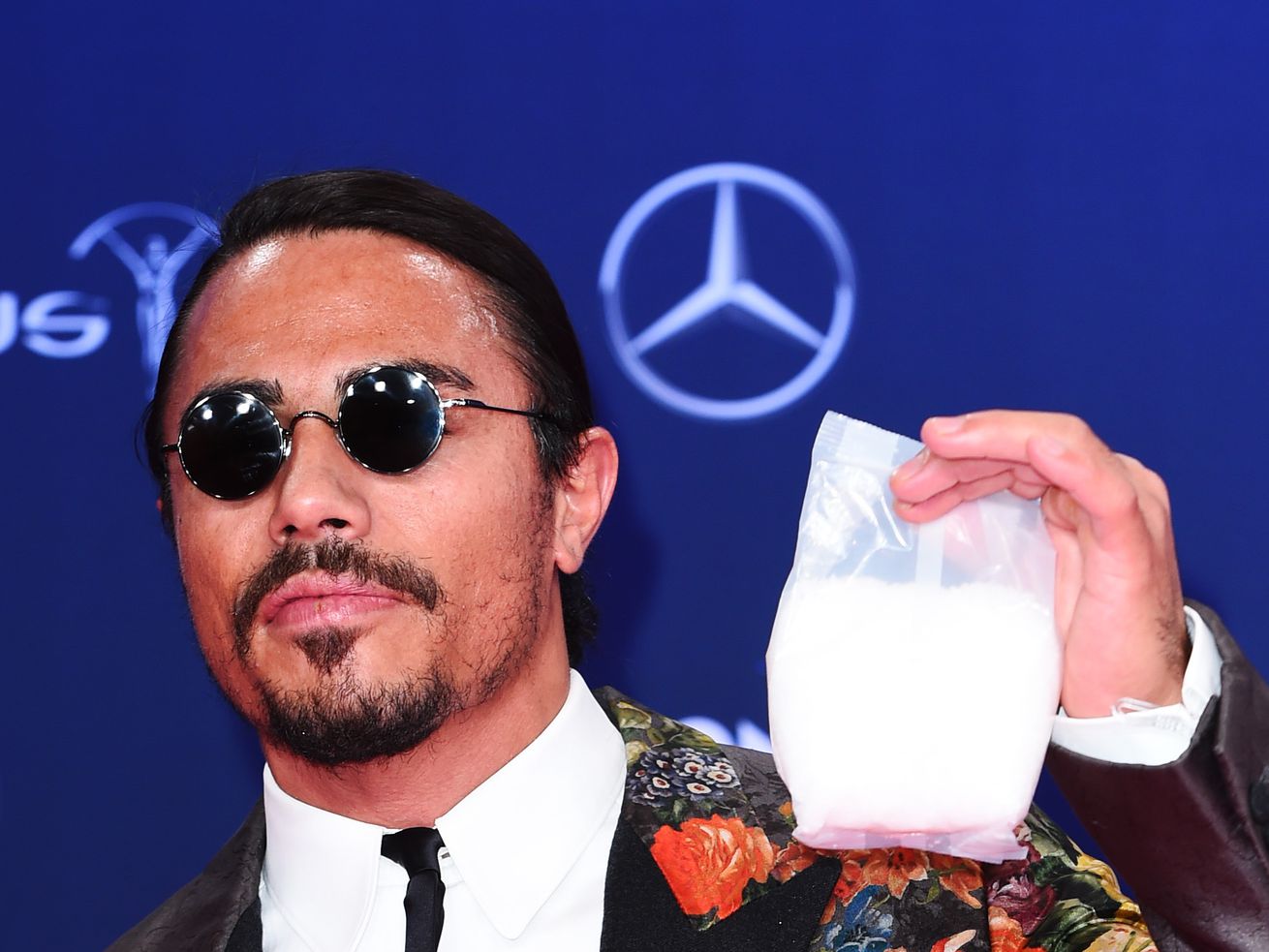 Until this week, Salt Bae was best known as an Instagram-famous chef. He wears tight V-necks, owns a global chain of high-end steakhouses, and entertains his celebrity clients by sensuously sprinkling salt on thick slabs of meat.

Since becoming a meme in January 2017, he has accrued more than 15 million followers on Instagram, where he regularly posts videos of himself searing, cutting, and salting expensive cuts of beef.

Then on Monday night, Sen. Marco Rubio (R-FL) thrust Salt Bae into the center of an international diplomatic crisis.

Rubio called out the Instagram-famous butcher Monday night for posting a video of himself serving a steak dinner to Venezuelan President Nicolás Maduro and his entourage. “This guy… who admires dictator @NicolasMaduro so much actually owns a steakhouse in, of all places, #Miami,” Rubio tweeted. He also tweeted out the restaurant’s address and phone number, “in case anyone wanted to call.”

It’s not surprising that Rubio, who represents an increasingly Venezuelan-American constituency and has previously suggested the US military should intervene in the country, criticized Maduro for getting dinner at an expensive steakhouse while his own people suffer from malnourishment.

But Rubio’s condemnation of Salt Bae also serves as a reminder that for celebrities and restaurant owners alike, hobnobbing with political figures can easily be interpreted as a sign of their own politics.

Who is Salt Bae, anyway?

Salt Bae, whose real name is Nusret Gökçe, is a butcher, chef, and restaurateur from Turkey.

His real claim to fame, though, was this video of his signature salting technique that went viral in January 2017. Gökçe capitalized on his 15 minutes of Insta-fame by expanding his namesake steakhouse, Nusr-Et — which already had several locations in Turkey and the United Arab Emirates — to New York and Miami.

Gökçe’s flick-of-the-wrist salting style quickly inspired copycats, merch, and Halloween costumes. People have painted murals of him, and he has his own wax sculpture. He even parodied his #SaltBae pose while casting his vote during the April 2017 Turkish referendum, though he declined to say how he voted.

The food at Salt Bae’s restaurants around the world isn’t particularly good, critics say, and it’s overpriced — steaks at Nusr-Et’s New York City location run from $70 to $275, according to the New York Observer — but it doesn’t seem to matter. Gökçe may have been a meme at one point, but his internet fame catapulted him to full-fledged celebrity chef status in less than a year. He’s salted and served meat to plenty of celebrities, including J Balvin, Naomi Campbell, Diddy, Drake, and DJ Khaled — and, yes, Nicolás Maduro.

Maduro recently stopped by one of Nusr-Et’s Istanbul locations following a four-day trip to China, during which he secured a $5 billion loan from the Chinese government in an attempt to salvage Venezuela’s collapsing economy.

Gökçe, who seems to love free publicity as much as he does expensive meat, posted several videos from the dinner on his Instagram page, which have since been deleted but were re-uploaded by the Miami Herald.

In one video, Gökçe cuts up slabs of beef for Maduro and his wife, Cilia Flores. In another, he presents Maduro with a T-shirt of himself. Slate reported that another video showed the pair hugging, with Maduro telling Gökçe, “See you soon in Caracas.”

This would all be pretty regular stuff for Gökçe, who regularly touts celebrity visits to his restaurants, if Maduro weren’t the de facto dictator of a country that has been plagued by corruption, inflation, and widespread famine for several years.

On average, Venezuelans lost about 24 pounds in bodyweight in 2017, and 90 percent of the country’s residents live in poverty. Many Venezuelans report going hungry because they can’t afford to buy food: The country’s inflation hit 82,700 percent in July, making food prices soar. A 1-kilogram packet of rice cost 2.5 million bolívars in August, according to a Reuters report.

An estimated 2.3 million Venezuelans now live abroad, and many have fled to Colombia, Ecuador, Peru, Brazil, and the United States in recent years, according to the United Nations.

Though Maduro won a recent election — which was likely rigged, as two of the country’s most popular opposition leaders were prohibited from running against him — by a landslide, he remains deeply unpopular even among his own supporters.

For Maduro’s opponents in Venezuela and elsewhere, seeing the country’s leader eat expensive steaks and smoke cigars while average citizens suffer from malnourishment is beyond insulting. The Yelp page for Nusr-Et’s Miami location was flooded with so many negative reviews that Yelp has temporarily stopped accepting new ones and is doing an “active cleanup” of those that have already gone up, the Miami Herald reported on Tuesday.

“While we don’t take a stand one way or the other when it comes to these news events, we do work to remove both positive and negative posts that appear to be motivated more by the news coverage itself than the reviewer’s personal consumer experience with the business,” an alert on the page reads.

Gökçe’s decision to serve Maduro has already been meme-ified

Gökçe’s Instagram has been flooded by commenters furious with him for serving Maduro. “You’re an accomplice of murderous regimes like that of Nicolas Maduro,” one person commented on a photo of Gökçe smoking a cigar. Others weren’t as civil.

On Twitter, users have begun sharing illustrations of Gökçe sprinkling salt on starving Venezuelans under the hashtags #MaduroSeJartaConTUDinero — “Maduro stuffs himself with your money” — and #ShameOnYouSaltBae. The chef hasn’t responded to the backlash, but he did delete the videos of himself with Maduro from his Twitter.

It’s also telling that Rubio was among the first to call out Salt Bae, even if he said on Twitter that he didn’t know who the famous chef was. The Venezuelan exile community is particularly large in Florida, especially amid the country’s recent outpouring of refugees.

Florida’s Democrats and Republicans are both vying to secure the Venezuelan diaspora vote, the latter by alluding to the Trump administration’s anti-immigrant and anti-refugee policies, and the former by encouraging both sanctions and military intervention in the country.

But the responses to Rubio’s tweets condemning Salt Bae have been mixed. While some praised Rubio for using his platform to call attention to the ongoing humanitarian crisis in Venezuela, others criticized him for encouraging his 3.6 million Twitter followers to harass a restaurant in his state. “A leader turning the mob on a political enemy? That’s what dictators do,” wrote one Twitter user.

Dining out has become political

Maduro’s critics have treated Gökçe’s decision to host the Venezuelan president — and to publicize the dinner on social media, in essence treating Maduro like any other celebrity who has paid a visit to Nusr-Et — as a tacit endorsement of his policies.

But Maduro is by no means the first politician whose night out has been overshadowed by politics.

White House press secretary Sarah Sanders was asked to leave a Virginia restaurant last summer. Its owner, Stephanie Wilkinson, told the Washington Post that kicking out Sanders was a way of standing up to the Trump administration.

Homeland Security Secretary Kirstjen Nielsen and White House senior policy adviser Stephen Miller both had to leave Mexican restaurants after being heckled by protesters in two separate incidents. Miller once threw away $80 of sushi after being heckled in a different incident. (It’s worth noting that Rubio criticized this sort of behavior when it was levied against Trump’s staffers.)

If the backlash against Gökçe shows anything, it’s that everyday interactions — going out to eat, getting on a plane — are being viewed with an increasingly political lens. And for business owners, the decision to serve controversial figures like Maduro is about more than just business.