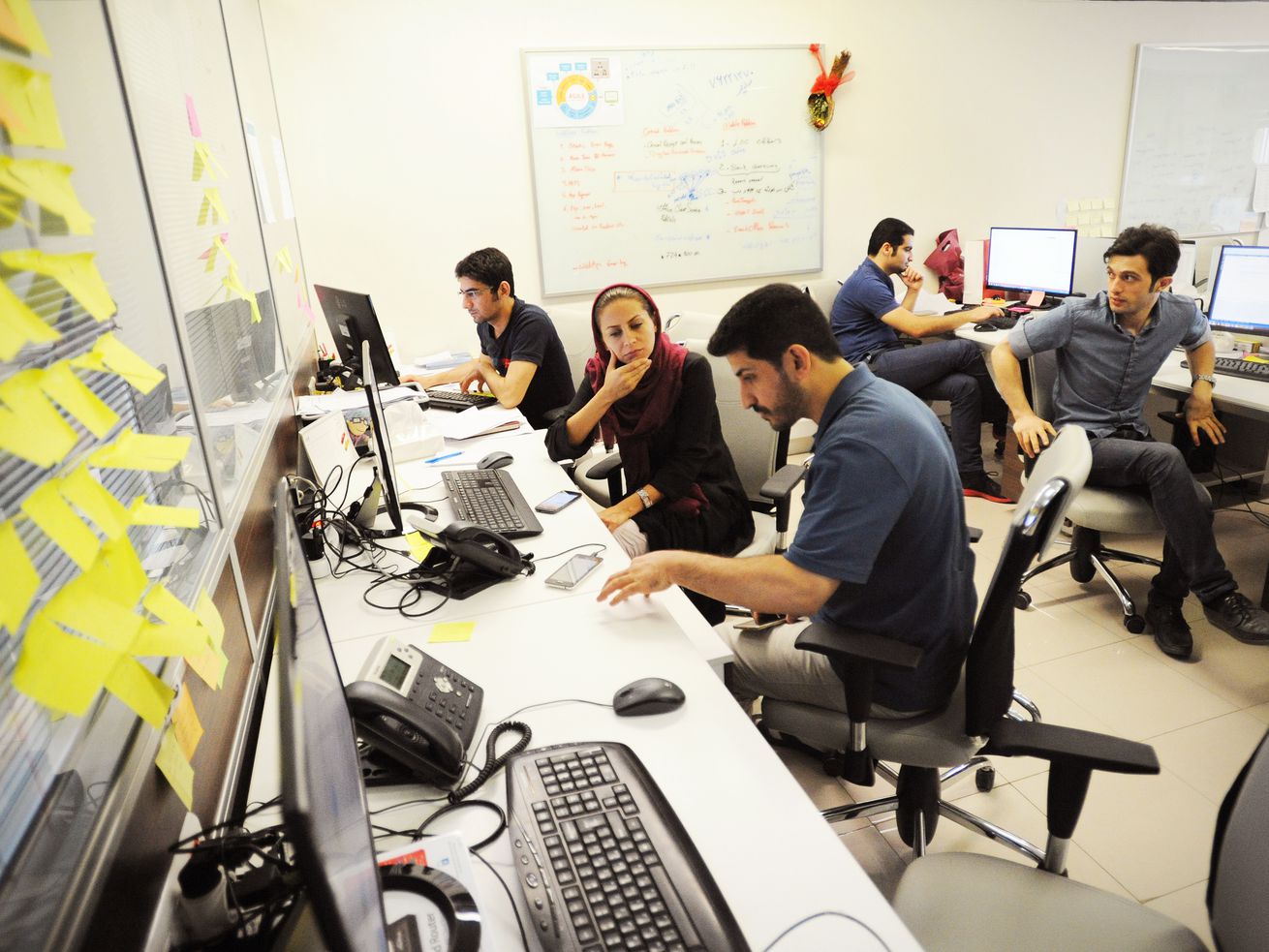 Young entrepreneurs are finding workarounds to problems like censorship.

AMMAN, Jordan — Ala’ Alsallal, 31, has a pitch to make: Invest in the Middle East.

Alsallal is the founder and CEO of Jamalon, an online platform that lets customers buy and ship Arabic and English language books. When I met him at his offices in Amman, Jordan, Alsallal was casually dressed in jeans and a tucked-in button-down shirt, his short beard covering a youthful, earnest face.

Alsallal is a Jordanian-born descendent of Palestinian refugees, and he started his highly successful online bookstore in 2010 out of his family’s home in Amman. Jamalon is estimated at making $2.6 million annually in revenue, employs more than 60 people at its headquarters in Amman, and recently opened an office in Dubai, the financial hub of the Middle East.

The company has been referred to as the Amazon of the Middle East, but that label doesn’t quite do it justice: The platform’s success, after all, is based on meeting a demand that Amazon has overlooked.

Jamalon offers more than 12 million books, including 150,000 in Arabic, and recently added a self-publishing book service based out of Dubai. Amazon, by contrast, offers only a few hundred books in Arabic, and is often difficult and costly to use in the Arab world.

This online bookstore is just one of the many startups redefining the Middle East’s booming tech and entrepreneurial scene. Last year, Arab entrepreneurs raised more than $3 billion in technology investments for the region — the highest ever, according to Bloomberg.

E-commerce sites like souq.com and ride-sharing apps like Careem are turning a profit while changing people’s experiences and expectations. And increasing access to smartphones has also reduced the technology gap between the haves and the have-nots across the Middle East and North Africa.

But the Middle East’s start up boom is not just the result of smart, tech-savvy young entrepreneurs convincing their families and friends to fund them. Part of what distinguishes this startup scene is people’s ability to create “workarounds” to the region’s many institutional, political, and economic problems — pragmatic approaches that also resonate with other parts of the world.

Amazon won’t work for much of the world. Jamalon could.

Almost a decade ago, Alsallal founded Jamalon out of his home, with the help of his mother and two sisters. He was frustrated by how hard it was to find and acquire books in Arabic.

“My mission is to create more content in Arabic so people can learn, get connected, and [close] the gap between what we have access to and what the West has access to,” he said during a July meeting in Jamalon’s bustling main office in Amman, which features amenities like pool tables that Silicon Valley types would find familiar.

Jamalon’s target population is increasingly literate and growing. Adult literacy rates in Arab countries rose from 55 percent in 1999 to 75 percent in 2010, while overall rates during this period rose from 89 to 92 percent, according to UNESCO.

But the supply of Arabic language books hasn’t kept pace: Places like Amazon offer comparatively few options, so publishers in the Arab world have continued to rely on roaming book festivals to market many of their products. It’s no surprise, then, that Saudi Arabia, whose highly literate population has money to spend, is one of Jamalon’s top markets, Alsallal said.

Alsallal doesn’t come from money: his parents were school teachers, and he studied in schools run by the United Nations Relief and Works Agency (UNRWA), the agency that provides services like education, healthcare and food to about five million Palestinian refugees (the same organization that President Donald Trump just cut all US funding for in August).

But Jamalon’s founder credits his success to the people who helped him along the way. When he was just getting started, Alsallal reached out to an Arab entrepreneur, Fadi Ghandour, for help. Ghandour founded Aramex, an express delivery company serving the Arab world, and is also the chair of the region’s leading investment firm, Wamda Capital.

Ghandour ended up becoming Alsallal’s mentor, and his investments helped Jamalon get off the ground.

Alsallal participated in Oasis 500, an incubator in Jordan, or a company which helps early-stage startups by giving them management and financial advice. He also went on a trip organized by the US State Department to bring young Middle Eastern entrepreneurs to America to learn about the startup culture there.

These opportunities are not as rare today as they once were. Around the Middle East, there are now more and more conferences and incubators where entrepreneurs and investors can network and exchange ideas, like the yearly RiseUp summit in Cairo and the Step Conference in Dubai, one of the region’s most popular startup gatherings.

The money has followed. Part of Saudi Arabia’s “2030 vision” for diversifying its economy away from oil dependence includes initiatives to make it easier for entrepreneurs to work there. One highly successful Silicon Valley venture capital firm has created its own Middle East fund, called 500 Falcons, through which it plans to invest $30 million in local companies.

Alsallal says he wants investors to take a second look at the ideas and solutions coming from Arab countries. But there are, of course, a lot of obstacles too.

For many, the Middle East can be a tough place to live, let alone start a business. The wars ravaging Syria and Iraq, widespread and endemic government corruption, conservative norms and regulations adverse to an independent private sector, and a historic reliance on public sector jobs are all factors that can make it really difficult to start a business, especially one that challenges the status quo.

There’s also the issue of youth unemployment: People between the ages of 15 and 29 make up around 30 percent of the popu­lation in the Middle East and North Africa, according to the Arab Human Development Report. And in 2014, about one-third of youth in Arab countries were without a job — more than twice the global average.

These circumstances mean that people have to innovate to solve basic problems that entrepreneurs in places like Silicon Valley don’t have to face. For instance, in much of the Middle East (and in many African countries), most people don’t have bank accounts or access to lines of credit.

But many do have easy access to a smartphone and the internet. In Egypt, for example, 35 million people are connected to the internet through smartphones, and 40 percent of the country’s 90 million people have smartphones, according to Ayman Ismail, the founding director of Venture Lab, a startup incubator at American University in Cairo. (Other studies have put overall internet penetration in the Middle East at around 50 percent.)

Careem, an Uber-like e-taxi service started in Dubai, has found success in part by following this model: The app allows people to pay by cash or buy prepaid cards if they don’t have an online bank account. Though it was only founded six years ago, Careem is now valued at $1 billion.

Entrepreneurs from the Middle East that I spoke to were also quick to tell me that they aren’t just “copying” ideas from the West; rather, they are drawing from new technologies to solve everyday problems around them based on their own insights and experiences.

Figuring out ways to circumvent strict government repression has proven to be fertile soil for tech startups. “Freedom of speech still doesn’t exist in the way we would like to see it in the region,” Alsallal says. Many books that include content on religion, politics, and sexuality are banned across the Middle East, often on “national security” grounds — a serious offense that comes with serious penalties, depending on the country.

So the Jamalon founder came up with a compromise: He would not actively promote a banned book on the website, but he would make it available, and always ship one if ordered.

When a government blocks the shipment of a banned book, Alsallel tries to persuade them to change their mind. “I explain to them that everything’s available on the internet,” he told me. “It’s not legally risky because we have several companies. So if you are in Egypt and you order a book through Jamalon, I’ll ship it to you from my Lebanese company. The maximum thing you can do as the Egyptian government is destroy the book.”

But Alsallal says part of the problem is that government officials are often undereducated, underpaid, and lack the technical skills for understanding and dealing with a rapidly changing startup scene.

Though he doesn’t think that more business opportunities will suddenly change the systematic corruption, nepotism, and authoritarian rule plaguing much of the Middle East, he does see the startup community as playing a role in changing some of this by addressing what he calls “miscommunication” between Middle East governments, international financial organizations like the International Monetary Fund, and the region’s entrepreneurs.

“When you have a problem, there are two goals,” he says, “find a workaround to the regulation or the problem with the government or market, and work on changing the government’s agenda.”

There’s social prestige in working for a startup in the Middle East. That wasn’t always the case.

In the old days, becoming an engineer or doctor was the best way to show that you had made it in many parts of the Arab world. But now, entrepreneurs and developers are gaining greater recognition and appreciation in places like Cairo, Amman, and Ramallah.

“We always had entrepreneurs in the region,” Ismail, the founding director of Venture Lab, says. “It’s just that most of them were doing traditionally family-owned businesses. What’s been growing over the last decades is more technical and innovation entrepreneurship … things like angel investors and startup incubators.” These are helping push would-be entrepreneurs in the right direction, he said. “They are looking for new ways for launching, supporting, investing in, and growing business.”

Alanoud Faisal, a 30-year-old entrepreneur and investor from Saudi Arabia who’s worked in Riyadh, Dubai, London, and San Jose, California, is one such example.

Faisal initially studied engineering but then switched paths, eventually co-founding a company, Inevert, a London-based global platform that connects startups looking for funding with corporations looking for investments. In a year or two, she predicts positive growth. “The way that now each year we see new venture capitalists pop up, you’ll see [corporations] playing a role with startups,” she said.

Faisal is typical of two trends in the Arab world’s tech scene: she’s young (30 now, 25 when she started), and she’s a woman. The Economist reported that over a quarter of startups in the region are founded or led by women, while that rate is closer to 17 percent in the United States, according to the tech research platform Crunchbase.

Faisal says she hasn’t faced any overt discrimination while working in Saudi Arabia, a highly conservative oil-rich country where women have only just been allowed to drive. She also said that she networks with a very particular strategy in mind. “I have a very straightforward approach when it comes to the people I meet with,” she said. “My time is valuable so I focus on what I want and I execute based on it.”

In Gulf countries like Saudi Arabia, where wealth is heavily concentrated among a small number of families, Faisal said she’s increasingly seeing entrepreneurs strike out on their own. “A lot of the up and coming people are like, ‘Yeah, our family supports us, but we want to create our own legacy,’” she said. “Even if they get the support initially, they want to do it on their own to prove they can.”

“Everyone has a global mentality,” she added.

It’s that global mentality that’s attracting investment from around the world — and that young entrepreneurs in the Middle East hope will help transform their visions for the future.

Miriam Berger is freelance journalist with a focus on people, politics, and policy in the Middle East.