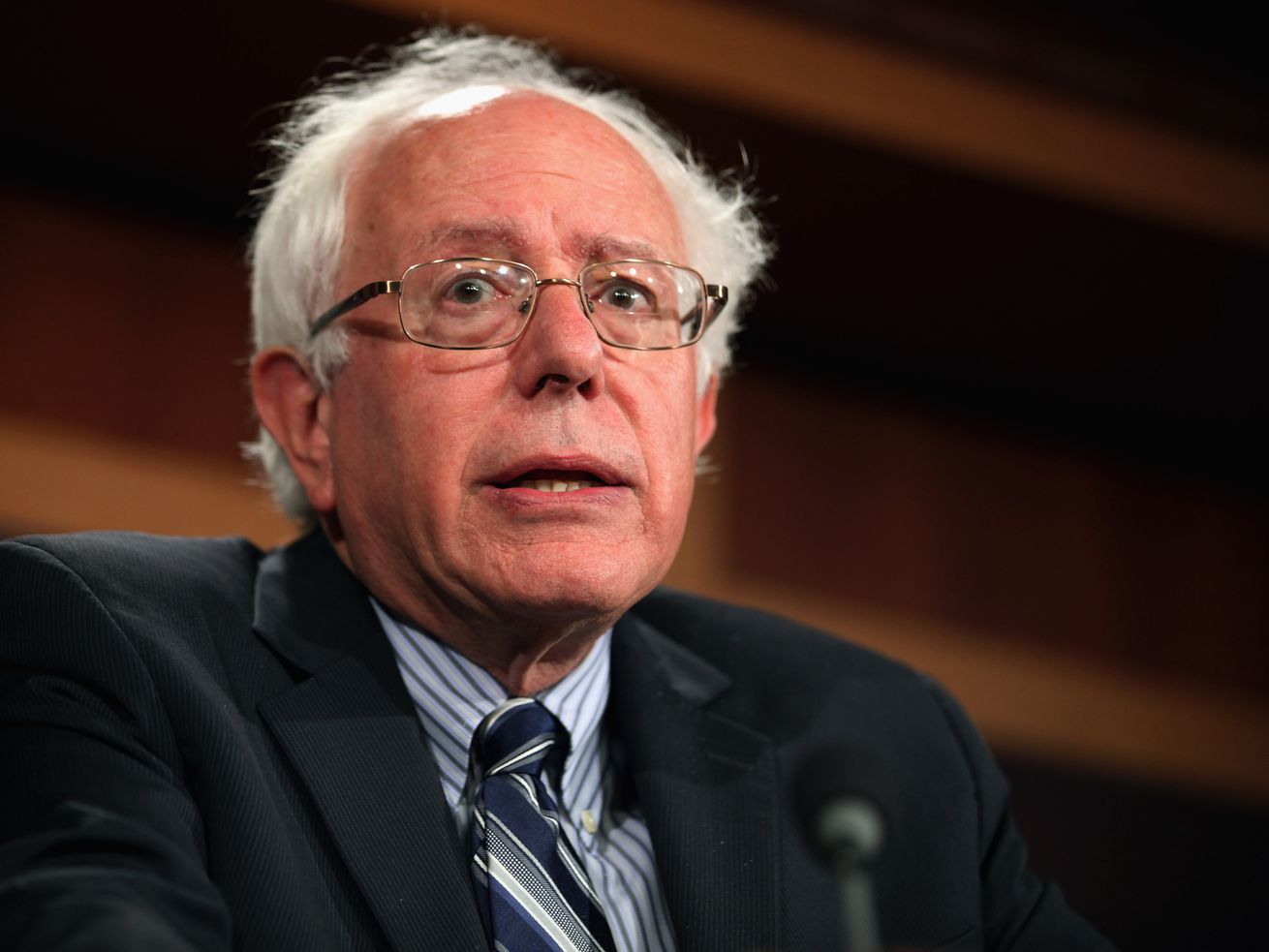 Employers should do more, but government support for workers has been key to the social contract.

For a draft bill that has no chance of enactment in the current Congress and not much chance even if Democrats win control, the Stop Bad Employers by Zeroing Out Subsidies (Stop BEZOS) Act introduced early in September by Sen. Bernie Sanders and Rep. Ro Khanna drew an astonishing level of criticism across the left and center of the political spectrum. The responses ranged from snarky tweets to a 3,000-word detailed critique from the Center on Budget and Policy Priorities (CBPP), the think tank that usually reserves its firepower for more immediate threats.

What motivated these fervent criticisms of a bill that would require large employers to repay the government when their employees needed public benefits such as Medicaid, SNAP (food stamps), housing assistance, or even subsidized school lunches? Was it residual hostility to Sanders, a blast from the intra-party enmity of the recent past? Was it “concern trolling,” as liberal journalist David Sirota called it? Was it another case of older liberals resisting a policy that our 1990s-trained brains aren’t prepared for? Was it unfair to come down so sharply on what’s simply a poorly designed first draft of a policy?

As Vox’s Matthew Yglesias proposed, perhaps it’s good for Democrats to push some rough, flawed ideas that change the conversation, just as conservatives did with the idea that cutting taxes, boosting military spending, and balancing the federal budget were compatible. This allowed them to move on the first two of those ideas when they held power and use the third to excoriate Democrats when they didn’t.

Stop BEZOS is what’s sometimes called a “message bill.” The point isn’t to become law but to reinforce the idea that some of the best-known employers in the country, such as Amazon and Walmart, don’t pay their workers enough, and many of these workers can’t live on income and benefits from work alone. But it’s as a message bill that Stop BEZOS is most fundamentally flawed. The message that it sends is to casually dismiss essential programs that have boosted incomes and life chances for lower- and middle-income people.

The CBPP analysis focused on the ways in which it’s an impractical proposal, in part because the federal government doesn’t have data on who benefits from the programs identified, many of which are administered at the state or local level. More importantly, the key variable that determines eligibility for these programs is usually not the wages of a single member of a family — it’s the size of the household.

A single parent with three children will be eligible for much more assistance than, say, a single worker without kids, or a couple with two employed parents and one child, even if each adult earns the same amount. If an employee or someone in the household has a disability, they’re also more likely to be eligible for benefits. Employers don’t have any control over those non-work factors. If they want to minimize their tax payments under the act, they would have to either pay employees with larger families or disabilities more than others doing the same job, or avoid hiring people with children.

Yes, in theory, they could pay everyone enough that none would be eligible for benefits, but that’s not realistic. In Sanders’s state, for example, children are eligible for Medicaid in households with incomes up to 312 percent of the federal poverty line. For a family of three with one full-time worker, that’s the equivalent of a $31-an-hour wage, more than double the minimum wage proposed by the “Fight for 15” movement. In California, where 12 million people are covered by Medicaid, the cutoff would be about $26 an hour for a family of three.

But the message the bill sends is not just that big companies (and small ones, too) owe more to their workers. It’s also saying there’s something wrong with using these programs that support workers, in exactly the ways that they’re intended to work.

That’s not just disparaging government. It overlooks a quiet revolution in US social policy over four decades: Working people, even those earning above the median income in some states, can be eligible for benefits. In the scope of American political history, that’s fairly new and a remarkable achievement. It was achieved not with a high-profile bill signing, but through incremental progress over several decades.

Back in the early 1980s, most benefits other than Social Security and unemployment insurance were exclusively for the very destitute. Medicaid eligibility was tied to eligibility for Aid to Families with Dependent Children (as welfare was called before 1996), and in most states, that meant only families well below the poverty line.

Beginning in the 1980s, Democratic legislators led by California Rep. Henry Waxman decoupled Medicaid from AFDC. They linked it instead to family income, starting at 100 percent of the poverty line, and then slowly ratcheted it upward — in some cases permitting states to cover more kids and parents, and in other cases requiring it. The generous programs in states like Vermont and California stem from that long incremental expansion, with the Affordable Care Act as the most recent big step toward broader coverage.

At the same time, the US was building other supports for working families, often with bipartisan support. The Earned Income Tax Credit was created in 1975 and expanded six times since, often with enthusiastic support from Republicans, who argued that it was preferable to an increase in the minimum wage. The child tax credit was created in the 1990s and expanded since. Funding for child care, including the Child Care and Development Block Grant, has increased steadily, including in the budget agreement earlier this year.

All of this has led to a huge shift in the US social contract, from one in which supports are based on poverty — often limited to deep poverty — to one in which programs are based on need and children. (Childless adults without disabilities get very little under either the older or newer approach.) Under the old model, poor adults who went to work would immediately lose whatever benefits they had, while often incurring new costs such as child care.

As paltry as AFDC and other benefits were, and although even minimum-wage work brought much more income into the family, the cost of moving off programs was high (usually losing health coverage as well as income). This created a trap that was identified by researchers on both the left (David Ellwood, whose book Poor Support influenced Bill Clinton) and the right (Charles Murray, in Losing Ground).

One response to that situation, from the right, was to treat benefits as too high or to put up barriers such as work requirements and drug tests, to filter out the “undeserving poor.” The better response, though, was to extend program benefits further up the income ladder, to include more families with at least one full-time worker. The cost of a transition to work, then, would not be a steep cliff in benefits, but a slow ramping down while income from labor increased.

This work-based social contract lowered the barrier for individuals to enter or reenter the labor market. It also reduced the cost of employing them, since the government was, in effect, boosting their wage through the EITC and providing benefits such as health care that the employer would have to pay for otherwise. These tax and transfer payments have also demonstrably boosted the incomes of families whose market income — wages, salary, and tips alone — have stagnated.

But there was a trade-off in shifting those costs to government: In some ways, it let employers off the hook, freeing them from the obligation to pay more and provide benefits. At times, there were direct choices between the two approaches: employer obligation or public subsidy. Whenever pressure for a minimum-wage increase built up for too long to ignore, conservatives suddenly became advocates for the EITC as a better way to achieve the same goal. (That’s when conservative think tanks dust off misleading studies showing that the benefits of the minimum wage often go to teenagers who aren’t their families’ prime earners.)

The progressive approach over these decades has been to strike a balance between expanding programs and forcing employers to recognize their obligations to employees — approaches sometimes differentiated by the terms “redistribution” and “predistribution.” Even the Affordable Care Act reflected that attempted balance, mandating that employers with more than 50 workers provide coverage, coupled with the subsidies through both the exchanges and Medicaid expansion.

The time may be ripe for a reexamination of the balance between the responsibility of employers and the public. Beyond raising the minimum wage to $15 an hour and requiring employers to provide paid family leave, asking them to assume more health care and other costs for all employees is likely to create a high barrier for employment. And if small and medium-sized employers are exempt (the Sanders bill threshold is 500 employees), a majority of workers won’t be helped anyway. In a system that put most of the burden on employers, we’d need a much more expansive social safety net for those not working: perhaps a universal basic income or a public-sector job guarantee, which would also include publicly funded benefits.

Alternatively, we might switch much of the responsibility besides wages to a public system, through policies that decouple health care from employment (of which Medicare-for-all would be one of several options), or create a new social insurance program for child care. Such an approach would have the advantage that it could be financed in part by taxing the very wealthy who hold capital, rather than directly by employers.

Fresh thinking within the Democratic Party should and will include an overdue debate about the balance of obligations in the social contract. But it should begin by recognizing ways in which progress has been made, through a long process of building programs that support families and children as they move up the economic ladder, and not just the very poor. Sanders and Khanna, with all the best intentions, are suggesting that they would go back to a system in which only the near-destitute were deemed deserving of public support. That’s why their bill generated such a negative reaction.