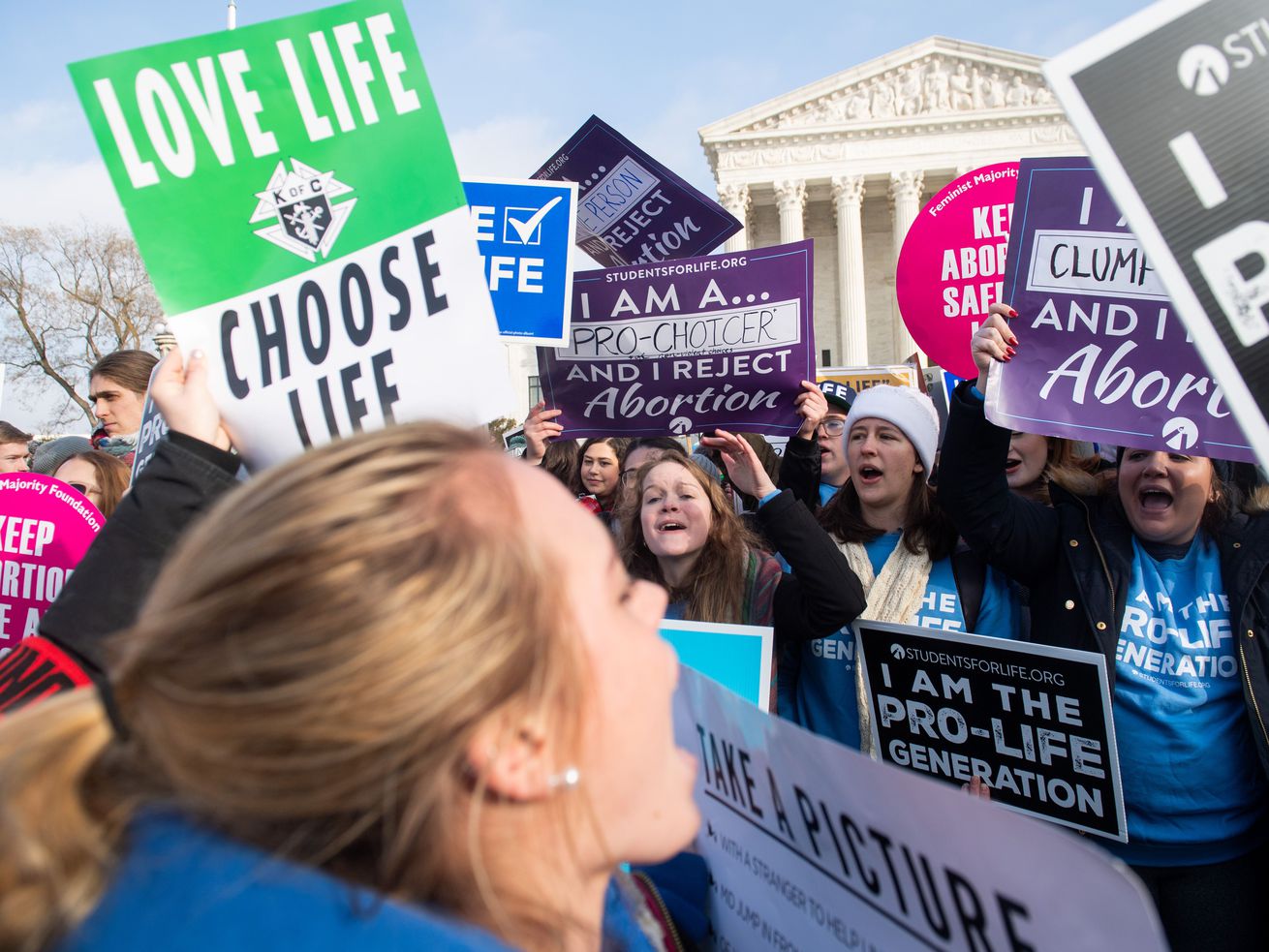 Anti-abortion activists as well as abortion rights activists demonstrate at the March for Life, an annual event to mark the anniversary of the 1973 Supreme Court case Roe v. Wade, outside the US Supreme Court in Washington, DC, on January 18, 2019. | Saul Loeb/AFP/Getty Images

Debate around a Tennessee bill shows a big shift in anti-abortion strategy.

When legislators in Tennessee debated a bill earlier this month that would ban abortion as soon as a pregnancy can be detected, opposition came from a surprising place: anti-abortion groups.

Though the groups National Right to Life and Tennessee Right to Life oppose abortion, they also oppose the Tennessee ban, because they believe it would never stand up in court. If such a ban were to make it to the Supreme Court, the groups worry it would fail: “There is no objective evidence that we have more than one vote to overturn Roe v. Wade,” said James Bopp, general counsel of the National Right to Life Committee, which describes itself as “the nation’s oldest and largest pro-life organization,” in testimony against the bill.

His words reflect what may be a growing fear among anti-abortion groups: that recent near-total abortion bans at the state level are so extreme that they could hurt their cause.

For years, mainstream anti-abortion groups in America favored an incremental approach, backing waiting-period laws or restrictions on clinics rather than sweeping bans. With the election of President Trump and the appointment of Justice Brett Kavanaugh to the Supreme Court, that changed, and near-total bans on the procedure began passing in states from Ohio to Alabama.

But all those bans have been blocked by courts, and now there are signs that the pendulum is swinging back the other way — toward smaller restrictions some believe have a better chance of surviving legal challenges.

“We think these kinds of early-gestation bans have been proven to be ineffective,” Steven Aden, chief legal officer and general counsel at the group Americans United for Life, told Vox. “There are more effective ways to express the state’s interest in protecting human life and women considering abortion.”

The backers of Tennessee’s bill aren’t giving up the fight. But the opposition by national groups signals that after a wave of highly restrictive bans, which inspired major nationwide protests, the anti-abortion movement may be going in a different direction.

The Tennessee bill was originally proposed in February as a “heartbeat” bill, banning abortion as soon as a heartbeat can be detected. Such bills have passed in states like Ohio and Iowa in recent months, but in Tennessee, Republican lawmakers were worried that such a bill would tie up the state in a lengthy court battle, according to the Tennesseean. The bill was referred to a special “summer study” session, which took place this week.

During the session, the bill became more restrictive, not less. It now bans abortion as soon as a pregnancy can be detected by a standard pregnancy test. It also attempts to redefine the medical and legal concept of fetal viability.

In the 1992 decision Planned Parenthood v. Casey, the Supreme Court ruled that states could not place an undue burden on a woman’s right to get an abortion before viability. Doctors define viability as the time in pregnancy when a fetus can survive outside the womb — it’s different for every pregnancy, but generally around 24 weeks’ gestation.

But the Tennessee bill argues that a pregnancy should actually be considered viable long before that, when the pregnant person has an elevated level of human chorionic gonadotropin, the hormone measured by common pregnancy tests. The bill bans an abortion once a test detects this hormone, except to prevent the pregnant person’s death or “serious risk of substantial and irreversible impairment of a major bodily function.” (There is also an exception if the hormone levels begin to drop and no fetal heartbeat can be detected.)

The bill won’t come up for a vote until January at the earliest. But it’s already inspired significant pushback from the right as well as the left.

Some anti-abortion advocates have criticized the attempt to redefine viability. It “makes us look foolish,” said Bopp, the National Right to Life general counsel, at last week’s hearings. “And I do not want to look foolish.”

But they’ve also objected to the general strategy. Tennessee’s bill, like abortion bans in Alabama and elsewhere, is designed to make it to the Supreme Court and serve as a challenge to Roe. But Bopp said at the hearing that this was a dangerous gamble: “There is no majority on the Supreme Court that we can identify that would uphold such a thing.”

Others agree. Tennessee Right to Life, the state’s three Catholic bishops, and its Republican lieutenant governor have all opposed the bill, according to the Tennessean.

Meanwhile, Americans United for Life, the group behind many incremental state restrictions in recent years, applauds “the passion and conviction of folks in Tennessee and many other states who are seeking to protect women and life in the womb through measures like this,” Aden, the group’s general counsel, told Vox — but they urge legislators to try a different tack.

They’ve encouraged Tennessee lawmakers to consider, instead of the current bill, “an informed consent provision that would allow women the opportunity to hear a heartbeat that is detected and judge for themselves whether they want an abortion,” Aden said.

“That would accomplish many of the purposes of a bill like this, and, we believe, likely pass constitutional muster,” he added. “There are different ways to go at this that are more productive.”

The opposition expressed by abortion opponents is a shift from earlier this year. Mainstream anti-abortion groups like National Right to Life and Americans United for Life had long favored a more gradual approach to curtailing abortion, and they weren’t the ones initially pushing bans like Ohio’s “heartbeat” law or Alabama’s even more restrictive measure, which bans abortion at all stages of pregnancy with no exception for rape or incest. The heartbeat laws, in particular, were based on model legislation by a less well-known group called Faith2Action. But as the bans passed or showed signs of passing, the incrementalists got behind them.

Ohio Right to Life, which had previously been neutral on Ohio’s heartbeat bill, threw its support behind the measure last December. The group viewed it as “the next incremental step,” Jamieson Gordon, the group’s director of communications and marketing, told Vox.

When Alabama passed its law in May, Americans United for Life CEO Catherine Glenn Foster praised the move.

“From conception to natural death, every single human life deserves to be protected by law,” she said in a statement. “Like other states that have passed laws concerning when life begins, Alabama has relied upon scientific and medical facts.”

Aden doesn’t characterize AUL’s position on Tennessee’s bill as a change: “AUL has always been about making strategic, smart choices to protect life,” he said. But “because this year in particular there’s been a tremendous amount of interest in these heartbeat and other early-gestation ban bills,” he said, “we feel like we need to speak up and encourage legislators to put their time and their attention and their passion into measures that will hold up in court.”

AUL and others may be concerned that the Supreme Court, in particular, isn’t eager to take up a near-total abortion ban. There’s evidence to suggest that Trump appointees Kavanaugh and Justice Neil Gorsuch, as well as Justices Clarence Thomas and Samuel Alito, would support overturning Roe, but Chief Justice John Roberts is more of a wild card, Melissa Murray, a law professor at New York University and expert in reproductive rights and justice, told Vox. While Roberts has voted against abortion rights in the past, he’s concerned about preserving the Supreme Court’s reputation and legitimacy, she explained: “As we go into 2020, an election year, he is going to be especially attuned to ensure that the Court stays above the fray.”

Many observers, she added, “suspect that he would be less amenable, certainly, to a law like the one Alabama, like the one that’s being debated in Tennessee, that prohibited abortion upon conception.”

Anti-abortion groups’ newfound reticence about restrictive bans may not be only about the Court. A majority of Americans — including Republicans — support leaving Roe in place. And “there was immediate backlash” to abortion bans in places like Alabama and Georgia, Murray said. If reproductive rights are an election issue in 2020, she added, anti-abortion groups “might rightly worry that not all women are going to be on their side.”

Of course, groups like National Right to Life and AUL still want to restrict abortion. It’s just that they want to keep using their incremental approach, not the more aggressive strategy that seemed to take hold earlier this year.

The step-by-step strategy has been very successful, leading to abortion clinic closures around the country; as of 2014, 90 percent of counties lacked a clinic, according to the Guttmacher Institute. And many believe it’s the strategy the Supreme Court might prefer — Murray and Aden both pointed to June Medical Services v. Gee, a case involving a Louisiana restriction on abortion clinics, as one to watch.

The Court could use such a case, rather than a higher-profile one involving a near-total ban, to overturn Roe. Or, Murray noted, “the Court might not overrule Roe vs. Wade but rather just continue to hollow it out.”

Whatever happens next, the change is palpable: Earlier this year, a new, more aggressive anti-abortion strategy seemed to be taking hold in America. But with state bans blocked and an election looming, some in the movement are now putting on the brakes.