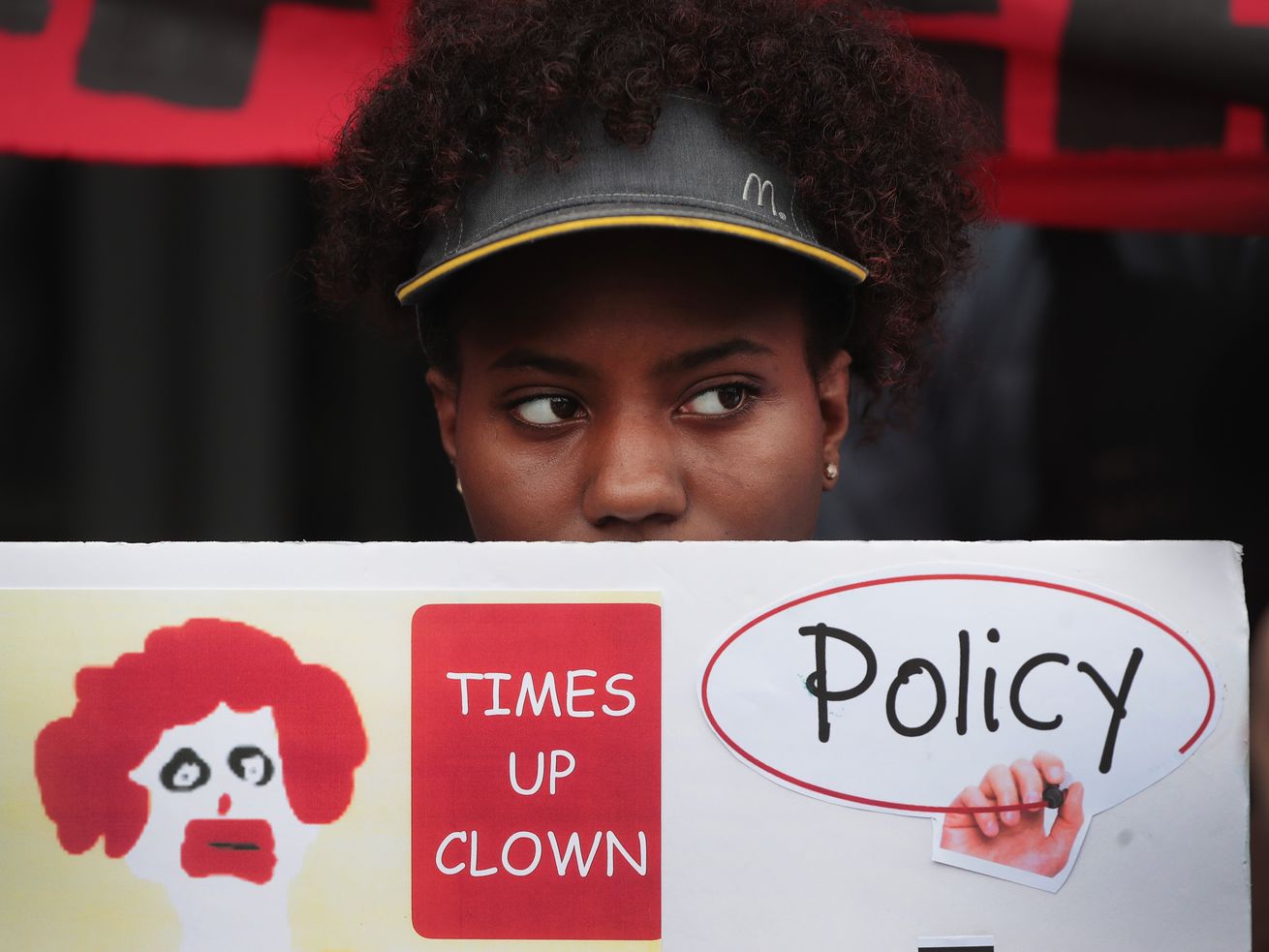 Workers walked out of McDonald’s restaurants to protest sexual harassment.

McDonald’s workers in several states are going on strike Tuesday over sexual harassment. Workers in some (but not every) McDonald’s in 10 cities — Chicago, Kansas City, St. Louis, Los Angeles, Miami, Milwaukee, New Orleans, Orlando, San Francisco, and Durham — walked out at lunchtime. They say they won’t return until tomorrow.

The strikes are an escalation after 10 McDonald’s employees filed sexual harassment complaints with the US Equal Employment Opportunity Commission (EEOC) in May. The employees say McDonald’s ignored complaints about workplace sexual harassment, which including groping, propositions for sex, and lewd comments. In response, a McDonald’s spokesperson said the company has policies and training in place to prevent harassment and would continue to work with experts to “evolve” these practices.

While sexual harassment has motivated workplace organizing for well over a century, today’s action may be the first multi-state strike focused on sexual harassment in US history. Notably, the strike is backed by both the Fight for $15 and Time’s Up, the latter a legal aid group for low-wage workers experiencing sexual harassment created by women in Hollywood, some of whom have been at the center of #MeToo stories. This strike shows the tangible impact of #MeToo, which, despite being characterized largely by elite, high-profile cases, has offered a much-needed opening for working-class people fighting back against sexual harassment.

As such, the strike throws a spotlight on two of the past year’s most important political developments: the fight against the continued decimation of working-class power and the emergence of the #MeToo movement. While the latter was created by activist Tarana Burke as a response to the prevalence of sexual abuse among working-class women of color, it became a shorthand for any and all discussion of sexual harassment after the New York Times and the New Yorker published their investigations of Harvey Weinstein.

Taken together, these developments make for a precarious reality: the beginnings of long-overdue cultural change, but without the power and protections needed in the workplace to enforce it. As journalist Judith Levine summarized the untenable result of the past few decades’ twinned rising feminism and declining working-class power, “Thanks to feminism, women’s confidence and control in their social and family lives were solidifying. But at the same time their ‘actual power’ was shrinking along with the power of the institutions that would speak for them.”

This year shows what that disconnect looks like. I’m a reporter and editor who has been covering labor and #MeToo, and it’s a tense moment. Working-class power carries on eroding, while at the same time, more people feel empowered to speak up about sexual harassment. Although there is little definitive data on it yet, I’d predict that the result is as follows: More people than ever are currently being retaliated against for resisting sexual harassment.

I know a woman who assumed #MeToo meant she should speak up about a sexually abusive man in her workplace, as she would be believed. She was fired a week later.

That’s why efforts to use #MeToo to build such power, particularly among those most likely to experience sexual harassment — low-wage workers, immigrants, people of color — are critical. And with today’s action, those efforts will get more attention than ever.

That McDonald’s workers are fighting against sexual harassment isn’t surprising. A 2016 survey of fast-food workers showed that 40 percent reported being sexually harassed, and 42 percent of those who experienced harassment felt keeping their jobs required they accept the behavior. Of those who did report it, more than one in five said they were retaliated against for doing so.

There are reasons workers in fast food are particularly vulnerable to harassment: Low pay and a lack of job security ensures gives them little say over any of their working conditions.

As Bernice Yeung, a journalist who has investigated sexual abuse among low-wage workers for years, told me, the financial precarity of low-wage work is central to the prevalence of harassment. “As janitors, farmworkers, and domestic workers have told me, trying to support their families on meager salaries means it’s difficult to make a complaint about sexual harassment since it might jeopardize the job that is their financial lifeline,” she said. For most individuals, the risk is simply too high.

Low-wage workers need more power on the job, and that’s what strikers are demanding of McDonald’s. They want procedures for receiving and responding to harassment complaints, mandatory anti-harassment training for managers and employees, and the formation of a national committee to address sexual harassment, composed of workers, representatives from corporate and franchise stores, and leaders of national women’s groups.

In addition to these demands, raising wages is a necessity to fighting sexual harassment. A stronger social safety net would reduce the costs of retaliation for women who come forward; a democratic workers’ organization — in short, a union — would offer a collective vehicle to overcome the high costs of fighting this problem individually.

These workers are up against the company’s war chest. McDonald’s is armed with battalions of PR firms and lawyers and political allies and money, while workers have their numbers and the company’s reliance on them to produce profit. Mcdonald’s responded to today’s action with an announcement that it would be “partnering with Rape, Abuse and Incest National Network, RAINN, and the legal-compliance firm Seyfarth Shaw at Work.”

It’s a remarkable pairing: a nonprofit to shield the company from a PR nightmare, and the law firm currently defending the Weinstein Company. We could have expected as much — any time you wonder how much a company values its workers, look at their paychecks.

As Tanya Harrell, an organizer behind today’s strike and one of the 10 workers to file the original complaint, says, “They want people to think they care, but they don’t care.”

She’s probably right. A partnership with RAINN is a low-cost alternative to the real solution: McDonald’s must allow its workers to organize and pay them more. Without empowering workers with tangible benefits, soft nonprofit partnerships will have little impact.

This isn’t to say that stronger worker power, for example in the form of unions, automatically rids workplaces of sexual harassment. Last year, SEIU, the key union backing the Fight for $15, faced its own harassment allegations within its leadership, many of whom were key architects of the campaign, charged with leading organizing efforts among a predominantly female workplace.

It’s hard not to wonder if a strike against sexual harassment at McDonald’s would have gotten off the ground has these men remained central figures in the Fight for $15.

The McDonald’s strikes prove the collective power of #MeToo

The question of reducing sexual abuse is a question of who has power. Yet much of the writing about #MeToo functions as a conversation among relatively elite people, concerned with other elite people, and whether the latter elites — who have maybe, probably, or definitely sexually abused someone — should or should not be welcome in the former elites’ workplaces and social world. Hypotheticals and thought experiments metastasize across the pages of publications while harassment and retaliation remain.

We live in a world where sexual harassment is, for the average person, very common. As Saru Jayaraman, president of the Restaurant Opportunities Centers United, a nonprofit workers’ center that organizes around sexual harassment in the food service industry, told me, many restaurant workers don’t even consider that the behaviors they experience at work are sexual harassment or that they have protections against such behaviors.

Given that reality, the McDonald’s strike isn’t just one more #MeToo story. Rather, it shows the early stages of what it takes to reduce sexual harassment and ensure there are consequences for perpetrators. The issue cannot be fixed from on high; it cannot be won by appeals to the morality of employers, and certainly not to perpetrators. It cannot merely be legislated — and definitely not policed — into resolution. It takes building collective power, not just individual empowerment.

Alex Press is an assistant editor at Jacobin and a PhD student in sociology at Northeastern University. Find her on Twitter @alexnpress.

The Big Idea is Vox’s home for smart discussion of the most important issues and ideas in politics, science, and culture — typically by outside contributors. If you have an idea for a piece, pitch us at thebigidea@vox.com.