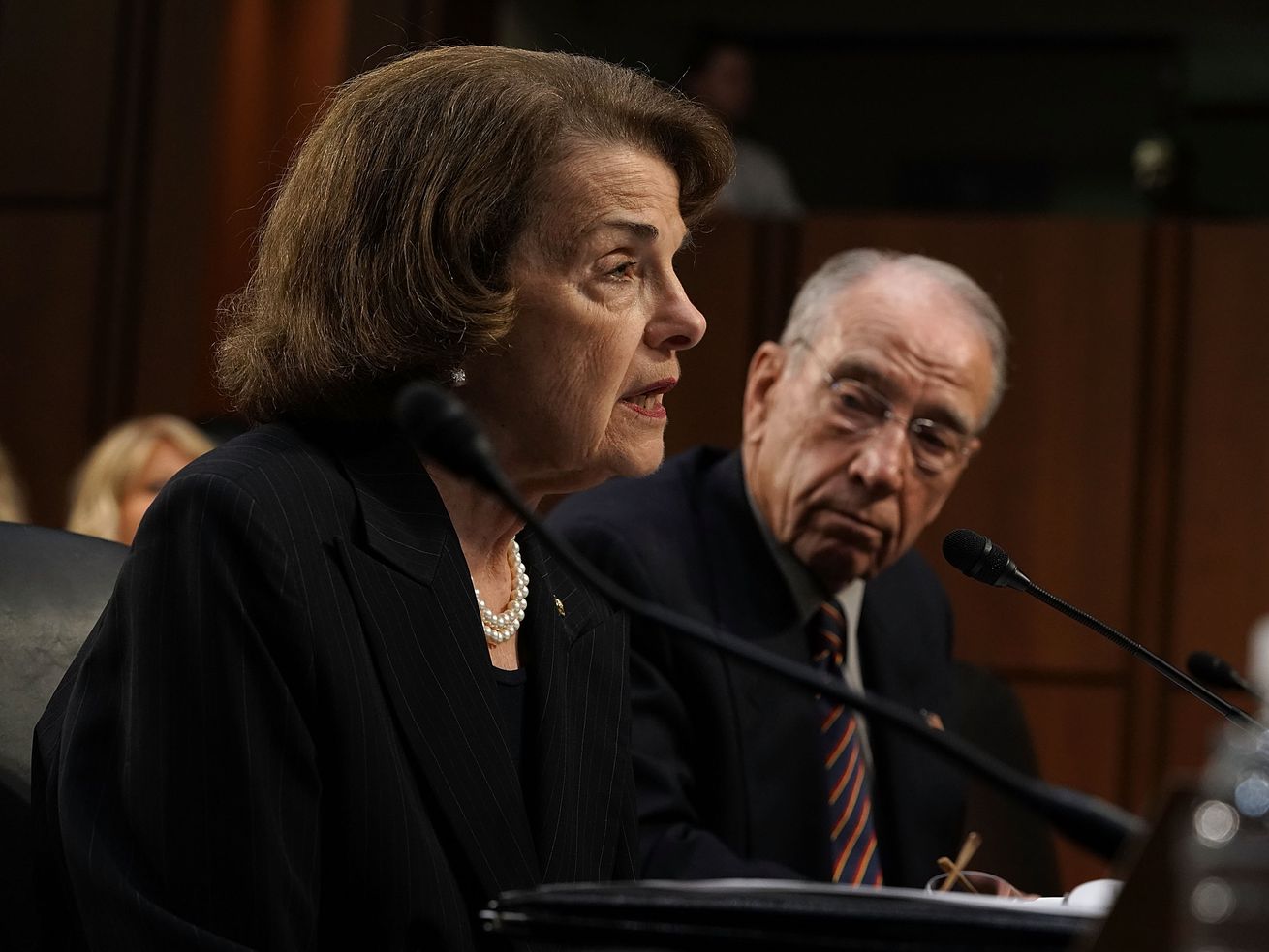 Dianne Feinstein shared it with the FBI this week.

The New Yorker published an explosive report on Friday about Supreme Court nominee Brett Kavanaugh, saying that a woman has accused him of trying to force himself on her when he was in high school.

The allegation was the latest development in a saga that played out on Capitol Hill all week involving a letter that Sen. Dianne Feinstein sent to the FBI but was reluctant to discuss in public.

The letter, as reported by the New Yorker’s Ronan Farrow and Jane Mayer, is from a woman who described an encounter with Kavanaugh at a party in high school. He held her down and tried to force himself on her, covering her mouth. She was able to escape, but the encounter was “a source of ongoing distress for her,” Farrow and Mayer wrote.

Kavanaugh has denied the incident ever took place, as has a classmate of his (Kavanaugh attended an all-boys high school) who was supposedly involved.

This is a new twist in the fight over Kavanaugh’s confirmation process. Democrats have argued that Republicans’ efforts to obscure documents from Kavanaugh’s records have prevented them from fully vetting his experience on issues like Bush-era detainee policy and affirmative action. And they’ve questioned Kavanaugh aggressively about whether he knew about sexual misconduct allegations against retired federal judge Alex Kozinski, whom he clerked for. This new allegation is much more serious — and it’s not entirely clear the Democrats involved wanted it to come to light.

It’s also likely to raise questions about what Feinstein knew and when. The New Yorker’s reporting suggests that Feinstein had known of the allegations for some time: She reportedly obtained the letter in late July and held off on sharing it more publicly out of concern for the privacy of the accuser, The New Yorker reports, and members of her staff had also reportedly indicated that the incident may have taken place too long ago to warrant public discussion. According to The Intercept, she didn’t even fully disclose the information to other Democrats on the Judiciary Committee.

Before the New Yorker report, Kavanaugh’s confirmation was moving ahead

The FBI — which handles background checks on a number of government appointees including Supreme Court nominees — says it has added the letter to Kavanaugh’s file. “Upon receipt of the information on the night of September 12, we included it as part of Judge Kavanaugh’s background file, as per the standard process,” an FBI spokesperson said. A bureau official also told The New York Times that it has not opened a criminal investigation into the matter.

Adding the letters to the file means that the White House and other Senators can review it. The updated file was reportedly sent to Judiciary Committee Chair Chuck Grassley on Thursday.

On Friday, Grassley’s office has also published a letter from 65 women who knew Kavanaugh during his high school years, noting that he “stood out for his friendship, character, and integrity.”

Before the New Yorker article was published, a representative for Committee Chair Chuck Grassley told CNBC that the panel intended to move forward with Kavanaugh’s confirmation process, which includes a committee vote set to take place next Thursday, September 20. “There’s no plan to change the committee’s consideration of Judge Kavanaugh’s nomination,” the spokesperson noted.

The White House did not immediately respond to a request for comment in the wake of The New Yorker’s report. The Trump administration argued Thursday that the letter was simply a last-ditch Democratic attempt to stymie Kavanaugh’s nomination: “Throughout his confirmation process, Judge Kavanaugh has had 65 meetings with senators — including with Senator Feinstein — sat through over 30 hours of testimony, addressed over 2,000 questions in a public setting and additional questions in a confidential session. Not until the eve of his confirmation has Sen. Feinstein or anyone raised the specter of new ‘information’ about him,” said White House spokesperson Kerri Kupec in a statement.

Feinstein reportedly worried about what might happen to the accuser

According to The New Yorker, the woman involved in the incident had said the announcement of Kavanaugh’s nomination for Supreme Court had spurred her recollection of the painful memory. She first reportedly reached out to her congresswoman, Rep. Anna Eshoo — who represents a portion of the Bay Area — and also contacted Feinstein’s office directly.

After repeatedly talking with both offices about the matter, the woman decided not to go public, The New Yorker reports. Feinstein, too, remained intensely private about the letter, an approach that baffled some of her Senate colleagues. Feinstein sought to focus on Kavanaugh’s legal record and was worried that publishing the letter could expose the woman involved to partisan attacks, sources familiar with Feinstein’s decision tell The New Yorker.

Feinstein’s office declined to provide any additional comment on the letter, and Eshoo’s office said it has a confidentiality policy when it comes to casework involving constituents.

The woman involved might have retained a lawyer, but that hasn’t been confirmed: The Intercept is reporting that Debra Katz, a DC-based civil rights attorney who had previously represented one of the women who brought abuse allegations against former New York Attorney General Eric Schneiderman, is representing her.

Katz was spotted leaving Capitol Hill on Wednesday evening, according to BuzzFeed, though she did not confirm her involvement when asked.

Kavanaugh has said there should be no tolerance for sexual harassment

Sexual harassment was brought up several times during Kavanaugh’s confirmation hearing. He emphasized that sexual harassment should not be tolerated and made his promotion of female clerks a major cornerstone of his testimony.

“[Sexual harassment is a] broad national problem that needs to be addressed, including in the judiciary,” Kavanaugh said during the confirmation hearing.

As part of the panel, he was questioned repeatedly about his knowledge of numerous sexual misconduct allegations against Judge Kozinski, whom he had previously clerked under.

Kozinski retired from his judgeship in December 2017 after multiple former employees said he showed them pornography, touched them inappropriately, or made inappropriate sexual comments to them. At least 15 women have made sexual misconduct allegations against Kozinski, which span decades.

Kavanaugh emphasized that he did not witness any sexual misconduct during his time working with Kozinski and said he has no reason not to believe the women who’ve come forward.

Kavanaugh, for now, is on course for a confirmation vote in the coming weeks. Grassley told BuzzFeed on Thursday that he had not personally seen the constituent letter and only knew of its existence via media reports that had been published.