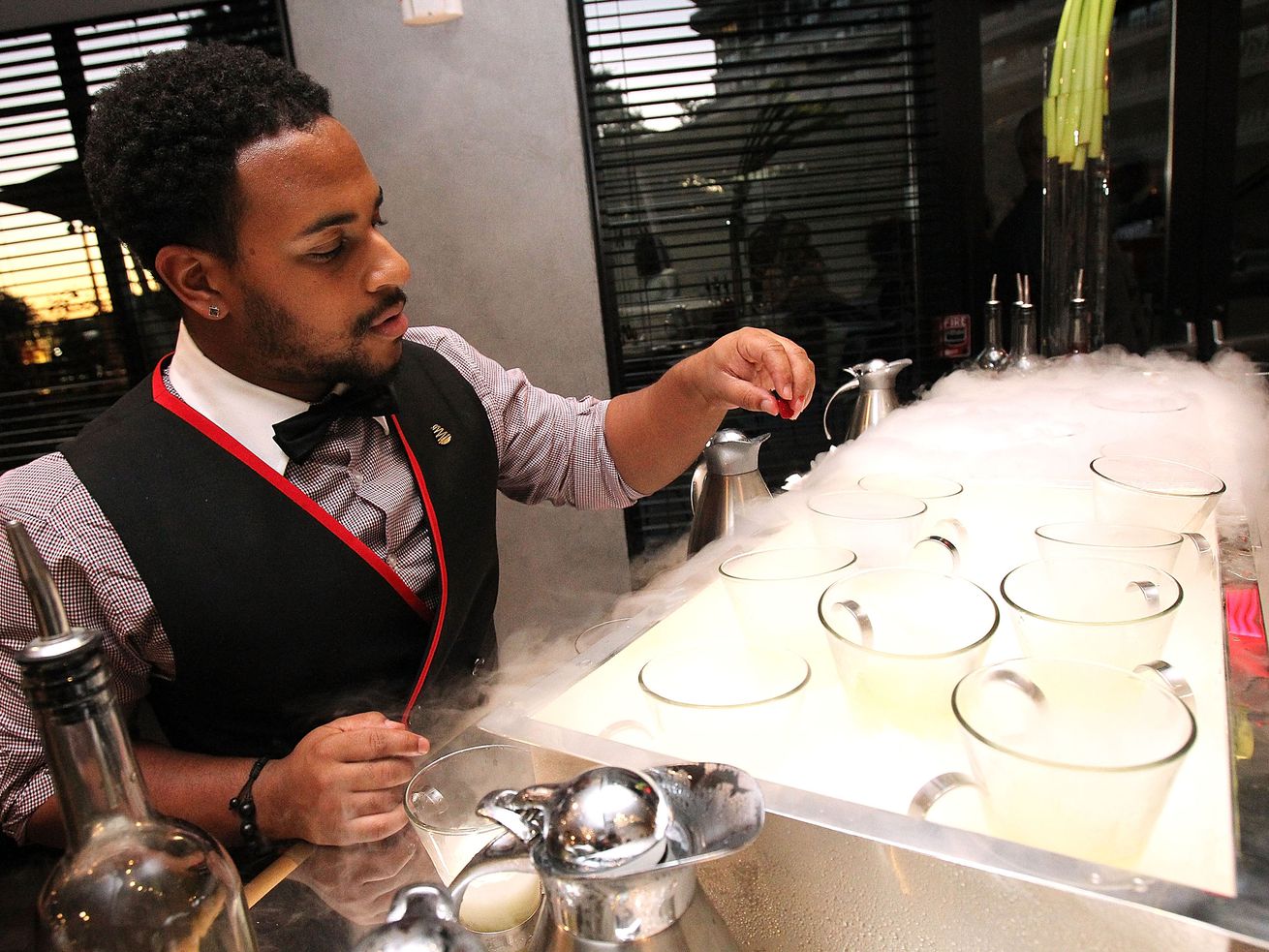 Mayor Muriel Bowser can still use her veto power.

City lawmakers in the nation’s capital have voted to overturn Initiative 77, a ballot measure voters approved in June to raise the minimum wage for restaurant servers and other tipped workers in the District of Columbia.

On Tuesday, the city council voted 8 to 5 in favor of repealing the measure, and now it’s up to Mayor Muriel Bowser to either veto or sign the bill. In the past, Bowser expressed opposition to Initiative 77.

The law voters approved requires DC businesses to eventually pay the full $15 local minimum wage to restaurant servers, bartenders, valets, and other workers who earn most of their income from customers’ tips.

Businesses in the city can currently pay tipped workers as little as $3.89 per hour as long as workers make enough money in tips to earn the full minimum wage. (The city’s regular minimum wage is currently $13.25 but will reach $15 by 2020.) If their tips aren’t enough, employers are supposed to pay the difference.

Labor groups say that abolishing the lower minimum wage will give a much-needed boost to low-income families who barely earn enough tips to make ends meet. But the measure sparked fierce opposition from the local restaurant industry, which claimed that such a move would drive away small businesses and force restaurants to slash jobs.

The fate of Initiative 77 represents a crucial test for the national movement to raise wages for low-wage workers. The District of Columbia is the first major city to outlaw the practice of letting employers pay a lower hourly wage to workers who earn tips, which is already illegal in seven states.

Despite all the hype surrounding Initiative 77, it’s unlikely to have drastic consequences. Based on the limited research available, customers would likely pay a bit more for their meals and tip slightly less. Workers would see a modest income boost, especially those who don’t work in fine-dining restaurants.

More importantly, the law would ensure all workers earn the full minimum wage, instead of trusting businesses to keep track of each employee’s tips.

The district’s economy will be fine

There has been a swirl of confusion about the impact of eliminating the sub-minimum wage for tipped workers in the district.

It’s not hard to see why. There’s not much research on the impact of eliminating the tipped minimum wage, and only a handful of old examples to study. Only two other places — the state of Maine and the city of Flagstaff, Arizona — have recently abolished the practice, but lawmakers in Maine reversed the measure in 2017 before it went into effect.

Under federal law, businesses can pay certain workers less than the $7.25 federal minimum wage if those workers make most of their money in tips. This has traditionally included restaurant servers, bartenders, valets, and bellhops.

According to the law, businesses can pay these workers the tipped minimum wage — $2.13 an hour. If the worker doesn’t earn enough tips to make the full minimum wage, the employer has to make up the difference.

Under this system, the customer essentially subsidizes workers’ wages with gratuities. Some states require businesses to pay a higher sub-minimum wage to tipped workers than the federal one.

So does DC, which requires at least $3.89 per hour. Seven states banned the practice decades ago or have never allowed a lower tipped wage at all. (California never did). New York and Michigan are now considering a similar ban.

Workers’ rights groups have zeroed in on the tipped minimum wage as one culprit in America’s growing income inequality. Job growth in the restaurant industry has outpaced other sectors of the economy and is expected to continue expanding.

The District of Columbia is now poised to become the first major player in this modern economic experiment — if the city’s lawmakers give Initiative 77 a chance.

Most restaurant servers in the city barely make minimum wage

When someone eats out at a restaurant in the nation’s capital, the tip they leave behind is not just a show of appreciation — it actually pays most of the workers’ minimum wage.

The restaurant owner only has to pay servers $3.89 an hour under the city’s labor laws. At the end of each week, if the tips don’t add up to the local minimum wage of $13.25 an hour, then the restaurant owner has to make up the difference.

Despite the city’s thriving high-end dining scene, the median hourly wage for servers in the city is barely above the minimum wage, including tips. Tipped workers in the city are twice as likely to live in poverty and use food stamps as the rest of the city’s workforce.

And these workers still earn tips. Data about tipping rates is scarce, but one analysis of tips left on credit cards shows that customers in states without a lower tipped minimum wage still leave gratuities. Alaska had one of the highest average tipping rates (17 percent); California and Oregon had among the lowest. But even the states that ranked toward the bottom had at least a 15-percent tipping rate.

And not having a separate tipped minimum wage hasn’t seemed to hurt the restaurant industry in those states. In fact, some cities in those states (Seattle, San Francisco, and Oakland) raised their minimum wage even higher than the rest of the state, and that did not lead to widespread job losses in the restaurant industry, according to research studies from the University of Washington and the University of Seattle.

The National Employment Law Project, a nonprofit labor policy group, has also weighed in. “The restaurant industry is strong in the seven states with no tipped minimum wage, demonstrating that it is economically feasible to phase out the tipped minimum wage without harming restaurant jobs or sales,” the group wrote in a 2016 report supporting Initiative 77.

The best comparison to the situation in DC would have been Maine, where voters approved a ballot measure in November 2016 that would have phased out the tipped minimum wage by 2024.

But months after passage, restaurant workers and bartenders said patrons were confused and tipping them less, even though the law hadn’t yet gone into effect. Their voices, plus fierce opposition from the National Restaurant Association, led lawmakers to reverse the ballot measure in July 2017. The tipped minimum wage in the state is currently $5 an hour.

Despite the lack of evidence to support the rosy outlook — or doomsday scenarios — pushed by various groups in the District of Columbia, the research that does exist gives an indication of what could happen when restaurants have to start paying workers themselves: Most of the workers would probably earn more, and customers would pay most of that cost.

Menu prices would go up, and most workers would probably earn more

The effects vary. One 2016 research paper from Maggie Jones, an economist at the US Census Bureau, analyzed W-2 data and concluded that when tipped minimum wages rise, employers pay a higher percentage of their workers’ hourly wages, but the workers’ tips decrease by just as much.

A 2015 paper by economists at Cornell University said that modest hikes in the tipped minimum wage do not lead to fewer jobs. “Even when restaurants have raised prices in response to wage increases, those price increases do not appear to have decreased demand or profitability enough to sizably or reliably decrease either the number of restaurant establishments or the number of their employees,” they wrote.

A 2014 paper by economists at Florida State University and Miami University in Ohio found a strong link between higher tipped wages and higher overall earnings for restaurant workers, but also a drop in the number of restaurant jobs. They concluded that every 10 percent increase in the tipped wage increased a worker’s earnings by less than 1 percent while reducing employment in full-service restaurants by less than 1 percent.

More recently, researchers at Virginia Commonwealth University, in partnership with the Restaurant Opportunities Center, studied the impact of New York’s minimum wage increase for tipped workers in 2015, the year it went into effect. Restaurant workers in New York saw their average salaries go up 6 percent that year, a larger increase than in neighboring states that didn’t increase wages.

Limited though it may be, this research suggests that Initiative 77 probably wouldn’t destroy the city’s economy or force most restaurants to close, or do that much to pull low-wage workers out of poverty.

Most of the city’s servers and bartenders would likely see a modest boost to their average income, and restaurants would probably eliminate some jobs. The change would definitely cost restaurants more money, and they would probably pass on most of that cost to consumers.

The push to eliminate the tipped minimum wage highlights how America has historically treated tipped workers differently than the rest of the US labor force.

Congress didn’t include protections for them when it passed the Fair Labor Standards Act of 1938, which established the 40-hour workweek and a federal minimum wage. The law was amended in 1966 to include tipped workers, but they were still not considered the same as other workers.

The amendment created a sub-minimum wage for tipped workers: 50 percent of the federal minimum. Employers could count a worker’s tips toward the other 50 percent needed to make sure they earned minimum wage. This is known as a “tip credit.”

In 1996, Congress made another significant change. It set the minimum wage for tipped workers at $2.13 an hour, instead of calculating it as a percentage (half) of the federal minimum wage (at the time, the full minimum wage was $4.26). The move was viewed as a concession to the National Restaurant Association and House Republicans who didn’t want to hike the minimum wage.

Since then, Congress has raised the federal minimum wage — but not the minimum for tipped workers. That means that over the years, tips have become a larger share of workers’ incomes. Some states have raised the sub-minimum wage, but 18 states have done neither.

There hasn’t been much action at the federal level. Democrats in Congress introduced a bill in 2017 that would have raised the federal minimum wage and phased out the tipped minimum wage, but it didn’t get enough support.

In 2014, the Obama administration suggested that it was time for the federal government to do away with the two-tiered system, arguing that restaurants aren’t making sure that servers earn the full minimum wage after tips.

The system places too much trust in employers to make sure their workers are earning enough in tips to meet the federal minimum wage, according the 2014 report from Obama’s economic advisers. When surveyed, more than one in 10 workers in predominantly tipped occupations report hourly wages below the full federal minimum wage, including tips.

The best case for raising the tipped minimum wage is to prevent wage theft. A lower wage for a certain group of employees creates a bookkeeping hassle. Employers are supposed to keep track of all the tips their employees earn each week to make sure they are paid at least the minimum wage. It’s easy to track tips on credits cards, but not cash tips that servers may pocket.

Workers’ rights group says this leads many servers to earn less than minimum wage during slow shifts, and the Labor Department has limited resources to make sure managers are making up the difference.

The restaurant industry is the top offender when it comes to wage theft, according to data from the Department of Labor. In 2017, the agency reported 5,446 cases against the restaurant industry, leading to $42.9 million in back wages for 44,363 workers. That’s twice the number of workers owed money than in the construction industry, which is the second worst offender.

The volume of cases continues to grow. The number of restaurant workers owed money in 2017 was more than double what it was in 2005.

Forcing businesses to pay the same minimum wage to all workers would be one of the easiest solutions to keep those numbers down.