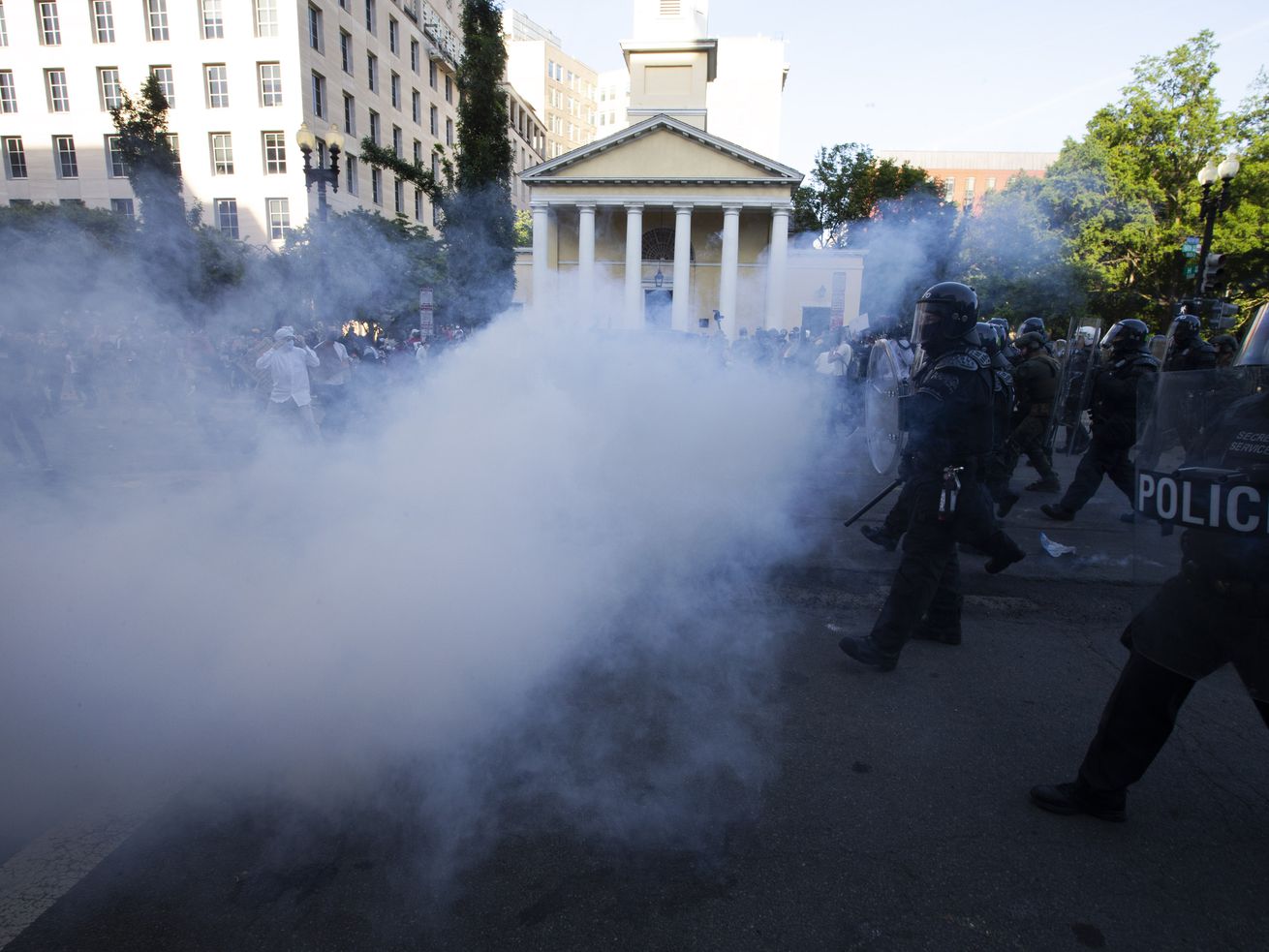 The new statement denying use of tear gas in a protest near the White House comes after immense criticism, including from Congress.

A US Park Police spokesperson said Friday in an interview it was a “mistake” to insist in a statement on Tuesday that it didn’t use tear gas the day before in a Washington, DC, park to disperse a crowd ahead of President Trump’s photo op, explicitly noting that pepper balls shot by officials irritate the eyes and cause tears.

“The point is we admitted to using what we used,” Sgt. Eduardo Delgado said. “I think the term ‘tear gas’ doesn’t even matter anymore. It was a mistake on our part for using ‘tear gas’ because we just assumed people would think CS or CN,” two common forms of tear gas.

But then, shortly before 4 pm, Park Police acting Chief Gregory Monahan walked back from the spokesperson’s comments and used the “tear gas” phrase again. “United States Park Police officers and other assisting law enforcement partners did not use tear gas or OC Skat Shells to close the area at Lafayette Park in response to violent protestors,” he said, referencing a type of canister found on the scene.

It’s yet another firm statement by the agency that it didn’t use any weapons banned in war on American citizens outside the White House.

Still, Delgado’s call to me Friday was an attempt to clear up the statement the Park Police released Tuesday, the day after reporters on the scene outside the White House said officers used tear gas on peaceful protesters. That statement, also from Monahan, said that no tear gas was used by any federal force present, but that the Park Police itself “employed smoke canisters and pepper balls.”

“I’m not going to say that pepper balls don’t irritate you,” Delgado said about the Tuesday statement, noting they contain capsicum, an irritant derived from pepper plants. “I’m not saying it’s not a tear gas, but I’m just saying we use a pepper ball that shoots a powder.”

The response became a national controversy in itself, with experts in policing tactics calling the distinction semantic. “Tear gas” is a broad term, often defined as a synthetic chemical irritant. Pepper spray is a naturally derived chemical irritant that causes many effects similar to that of common types of tear gas, including temporary blindness and a burning sensation in the nose.

On Friday, Delgado maintained their original statement was accurate as it relates to the Park Police: “No tear gas was used by USPP officers.” US Park Police used only those nonlethal weapons as law enforcement forcibly pushed peaceful protesters away from the White House. In fact, he said — as he has before — that his agency doesn’t carry tear gases known as CN, even though canisters of all of them were found on the scene. As for CS, the agency doesn’t carry the specific type found on the Square, but it does carry CS in general.

Delgado couldn’t comment on whether or not other federal agencies, like the Secret Service, used tear gas at the protest. All law enforcement agencies involved in the violent dispersal, though, have denied launching tear gas.

One reason the Park Police felt it was right to say tear gas wasn’t used in its Tuesday statement, per Delgado, is because they were referring solely to the employment of CN and CS gases, which the Centers for Disease Control and Prevention labels the “most common” forms of tear gases. The CDC, which also uses the term “riot control agent” for tear gases, does say that “pepper spray” is considered a “riot control agent.”

Anna Feigenbaum, author of the book Tear Gas: From the Battlefields of World War I to the Streets of Today, told Vox’s Jen Kirby on Wednesday that “You can have ‘gases’ in different forms. It can be liquid, it can be powder.”

“It was kind of a fault on our part just not saying in the first place ‘we did not use CN or CS, we used smoke and pepper balls,’ and that would’ve made it a moot point,” Delgado said. “Some people claim we purposefully tried to mislead by saying ‘we didn’t use tear gas, we used pepper balls.’ … That was not our intention.”

The goal was to be “transparent” about what the Park Police used, he continued. “Everybody went on a tangent saying ‘Well, isn’t a pepper ball tear gas?’ And it’s like, ‘I don’t know.’ I’m just telling you what we used and what we didn’t use.”

Delgado, in a separate interview with Business Insider on Friday, made the same kind of comments: “It was just an incorrect term that we used, we should have said we did not use CS or CN,” he said.

But he was adamant that events make clear CS and CN weren’t used.

“If we had shot CS or CN, every [Park Police] officer there would’ve had a gas mask on,” said Delgado, who was present at the forced dispersal on Monday. “But what you saw were very few officers with gas masks walking through the quote-unquote tear gas with no effects. Now that would be impossible if that was CS or CN and you had no protection.”

“I’ve been through the stuff. You would see officers and civilians crawling, everything out of their sinuses pouring out onto their shirts and onto the ground, people helping each other walk because you can’t see,” Delgado noted.

Still, Delgado’s acknowledgment that using the term “tear gas” in the Tuesday statement was a “mistake” prompted backlash, including from federal lawmakers.

Oh, what an interesting “mistake.” https://t.co/nHJErlMb74

Under that kind of pressure, then, it’s a bit surprising that Monahan would use that language once more.