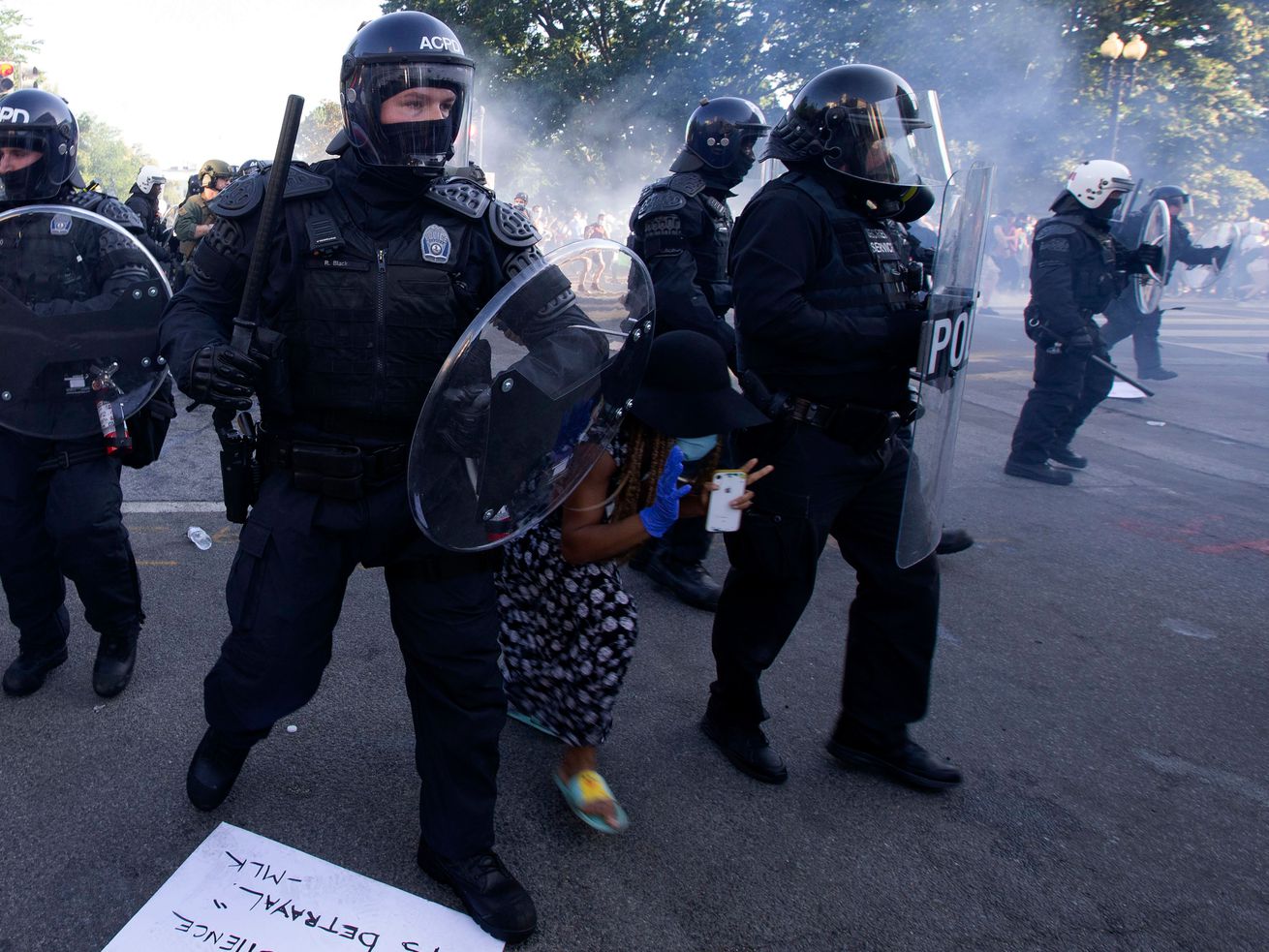 The official statement raises more questions than it answers.

Nearly 24 hours after law enforcement used force to push peaceful demonstrators away from the White House to make way for presidential photo op, the US Park Police offered a statement on its involvement — and it raises a lot more questions than it answers.

On Monday, Park Police — along with members of the US Secret Service and the National Guard — dispersed a large crowd of protesters using what reporters and other witnesses on the ground said was tear gas and rubber bullets, harming demonstrators and journalists alike.

Minutes later, President Donald Trump gave a brief speech in the White House Rose Garden then walked through an emptied Lafayette Square to a nearby church to take pictures with a Bible.

Video of the chaotic scene spread quickly on social media and news outlets, sparking outrage. On Tuesday afternoon, the US Park Police (USPP) responded to the criticisms.

“No tear gas was used by USPP officers or other assisting law enforcement partners to close the area at Lafayette Park,” he continued.

To be clear: Monahan is claiming the protesters amassed near the White House were “violent,” that they were perhaps plotting some kind of attack of their own, and that no federal officials whatsoever used tear gas to disperse the demonstration.

But the problem is all the available evidence, from numerous videos taken at the scene to reports from witnesses and journalists who were on the ground at the time, shows otherwise.

Why the Park Police’s statement is dubious

Let’s start with Monahan’s claim that the protesters were “violent” because they were throwing projectiles at law enforcement.

According to multiple reporters who were on the ground documenting the events, the protests were entirely peaceful. “We didn’t see projectiles thrown at police. Certainly no bricks or ‘caustic liquids,’” Alexander Marquardt, a CNN reporter who was at Lafayette Square that evening, tweeted on Tuesday.

In fact, in this Reuters video taken of nearly the entire scene, there are no violent instances of what the Park Police statement describes (other than some expletives and insults lobbed at law enforcement).

It’s unclear, then, what the Park Police is referencing. Perhaps it’s an exaggeration of what an unnamed Justice Department official told the Washington Post on Tuesday: that some crowd members passed rocks among themselves and threw a bottle in the direction of Attorney General Bill Barr. Barr, a top Trump ally, was surveying the scene and reportedly personally ordered law enforcement to push the protesters back.

There’s also no direct evidence that protesters were hiding caches of weapons — glass bottles, bats, and metal poles, according to the statement — to use against law enforcement. If there are images showing that such items were indeed found on the site of the demonstration, as the Park Police claim, they haven’t been shared with the public.

Finally, there’s the assertion that Park Police and other law enforcement personnel involved that evening didn’t use tear gas to clear the square.

This has become one of the most contentious points in the entire saga, even though Monahan acknowledges in the statement that the officers did use smoke canisters and pepper balls (pepper spray projectiles) against the protesters.

This is what happened on the other side of the White House only 5 minutes before President Trump began remarks in the Rose Garden. pic.twitter.com/n3UNLTBAKn

“Tear gas” is a broad term, often defined as a man-made chemical irritant. Pepper spray is a naturally derived chemical irritant that causes many effects similar to that of common types of tear gas, including temporary blindness and a burning sensation in the nose. Which means that, even if tear gas was technically not used — a claim that isn’t settled fact for reasons I’ll get into in a minute — police still used a very similar chemical weapon against peaceful protesters.

Still, facts matter, so the question of whether they used tear gas or not is important.

Journalists who covered the protests in person that evening say without a doubt that law enforcement used tear gas, a chemical irritant that can cause those exposed to it to want to vomit.

Hi Laura. Park Police are the ones with the blue helmets in this clip, part of a clearly coordinated advance. You can also see the many colors of gas and people reacting in real time. Please have more respect for your audience than this. https://t.co/ybbEQD0Fl8

This “no tear gas” angle is ridiculous. I was in the middle of a crowd coughing up a lung. All sort of projectiles were being fired at a peaceful crowd. I just watched our raw video from 6:35-7pm. Protesters had taken a knee, chanting “Black Lives Matter” when the advance started https://t.co/t0piOrEdJd

And activists seen throughout the Reuters video also complain they were directly hit with tear gas.

On the use of gas yesterday: moments before authorities started firing, @hannah_natanson and I captured images from two separate angles of National Guard members in gas masks: pic.twitter.com/qMClpf8Lgf

The Trump reelection campaign, though, is sticking with the Park Police, asking reporters — including me — to “retract and correct” published stories that say tear gas was used.

“It’s said that a lie can get halfway around the world before the truth can get its pants on. This tear gas lie is proof of that,” Tim Murtaugh, the Trump campaign’s communications director, said in a Tuesday evening statement.

The Park Police has a lot more explaining to do. Monahan’s statement by itself doesn’t clear up any of the main contention points. But what it does do is further confirm that Park Police felt it was necessary to respond to the protests with violence — all so Trump could have a photo op.

That, perhaps more than dubious claims in the official statement, is the most damning part of all.