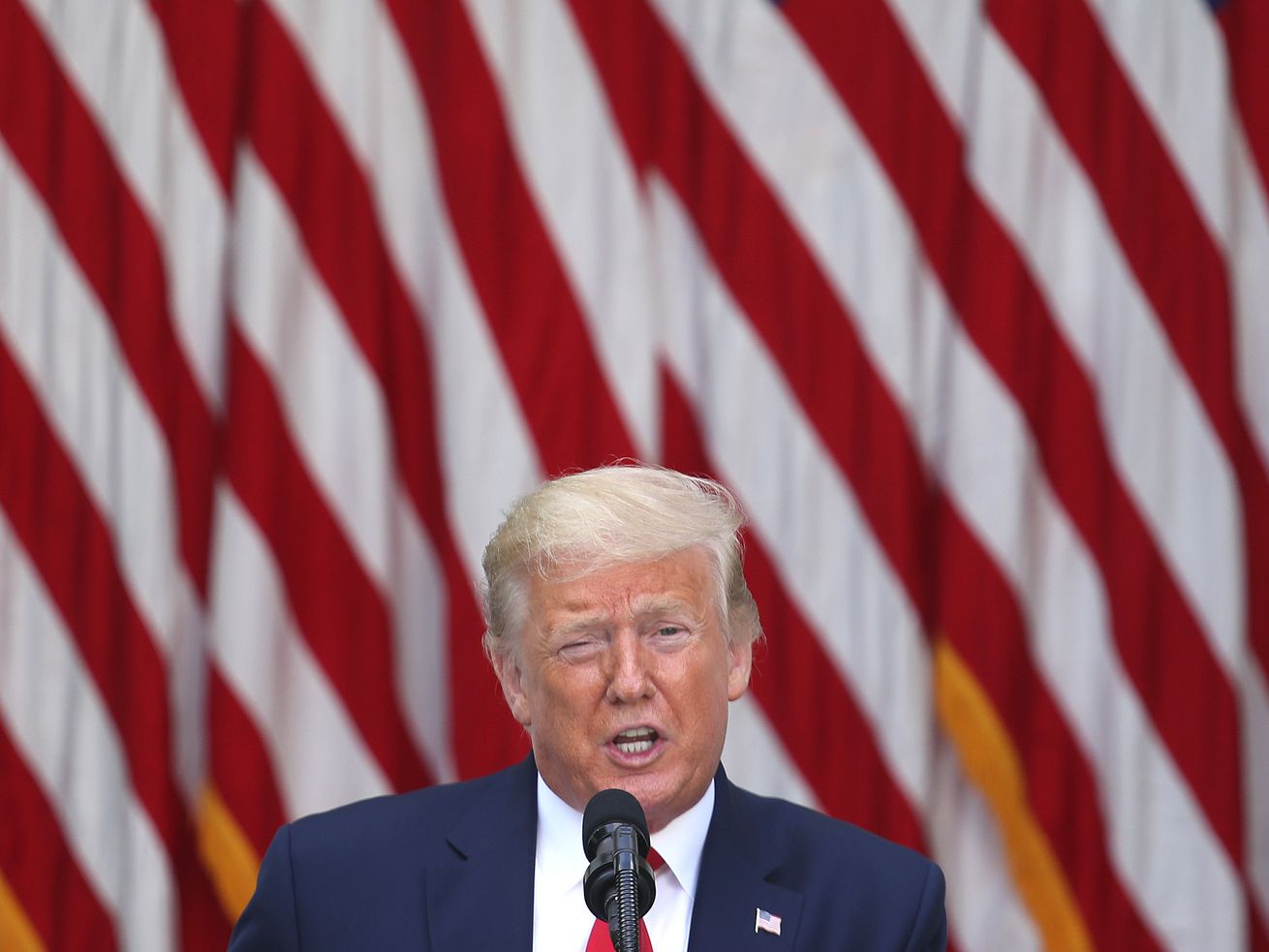 President Donald Trump delivers remarks in the Rose Garden at the White House on May 26, 2020.  | Win McNamee/Getty Images

After the president tweeted misleading information about mail-in ballots, Twitter applied a warning label to Trump’s tweets for the first time.

For the first time ever, Twitter has fact-checked President Trump’s tweets.

Until now, Twitter hasn’t taken any action against Trump’s account or tweets even when he has flouted the social media platform’s rules by posting false, harmful, or misleading content. Twitter’s rationale for letting Trump post these kinds of tweets has been that because he is a world leader, his posts are considered newsworthy and are therefore an exception to its policies. But after years of criticism about that stance, on Tuesday, the company added fact-check labels on two of Trump’s recent tweets that shared misleading information about voting by mail.

On Tuesday afternoon, Twitter placed labels underneath Trump’s tweets claiming that mail-in voting ballots in the 2020 presidential race will be “anything less than substantially fraudulent” and lead to a “Rigged Election.” If you click the labels, they take you to a fact-checking page that calls out the president’s false statement.

While Twitter’s move will be welcomed by those who have long called for Twitter to start applying its policy rules to the president’s account, it’s also sure to set off conservative critics, who argue that by labeling the president, Twitter is limiting freedom of speech on the platform and reflecting a purported — but unsubstantiated — anti-conservative bias.

The label links to a fact-check “Twitter Moments” page, which calls Trump’s claims about potential voter fraud “unsubstantiated” and cites news articles from CNN, the Washington Post, and other media outlets.

The company shared the following statement about the decision:

“These Tweets (here and here) contain potentially misleading information about voting processes and have been labeled to provide additional context around mail-in ballots. This decision is in line with the approach we shared earlier this month.”

President Trump’s 2020 campaign manager Brad Parscale shared a statement expressing the administration’s discontent with Twitter’s decision shortly after it was announced on Tuesday.

“We always knew that Silicon Valley would pull out all the stops to obstruct and interfere with President Trump getting his message through to voters. Partnering with the biased fake news media ‘fact checkers’ is only a smoke screen Twitter is using to try to lend their obvious political tactics some false credibility,” Parscale wrote. “There are many reasons the Trump campaign pulled all our advertising from Twitter months ago, and their clear political bias is one of them.”

Trump also responded, accusing Twitter of “interfering in the 2020 Presidential Election” and stifling free speech by adding the label.

.@Twitter is now interfering in the 2020 Presidential Election. They are saying my statement on Mail-In Ballots, which will lead to massive corruption and fraud, is incorrect, based on fact-checking by Fake News CNN and the Amazon Washington Post….

Earlier in May, Twitter announced it would start to label misleading information, which the company says it’s been applying to key topics, starting with 5G conspiracies, and now, civic integrity and voting.

The company’s decision comes at a time when the president is under scrutiny for his latest tweets — in particular for a series of posts making baseless murder accusations, as well as promoting the drug hydroxychloroquine as a treatment for Covid-19 patients, which could be potentially harmful.

A spokesperson for Twitter told Recode that the company decided to label the mail-in ballot tweets in particular because they deal with what the company considers a key issue area of civic integrity and voting.

The company’s fact-check of Trump raises some big questions about the precedent this sets for other world leaders. Will Twitter start fact-checking people like Venezuela’s Nicholas Maduro, China’s Xi Jinping, and Iran’s Ruhollah Khamenei when they make misleading statements on the platform?

Twitter says it won’t be able to fact-check every misleading claim by a world leader, but will start doing so for some others as well. It has already deleted tweets from Brazil’s President Jair Bolsonaro and Venezuela’s President Maduro in which they endorsed unproven treatments for Covid-19. Last year, it also removed a tweet from an account reportedly linked to Iran’s Supreme Leader Khamenei calling for the execution of novelist Salman Rushdie.

While Twitter’s move Tuesday is incremental, it signals the company is willing to take more of a stand on misleading content on its platform — even if the person tweeting that misleading information is the president of the United States. The challenge will be when it decides to weigh in on the endless bucket of half-truths, conspiracy theories, and outright lies politicians post every day, and which are likely to increase in cadence as we get closer to the 2020 presidential election.