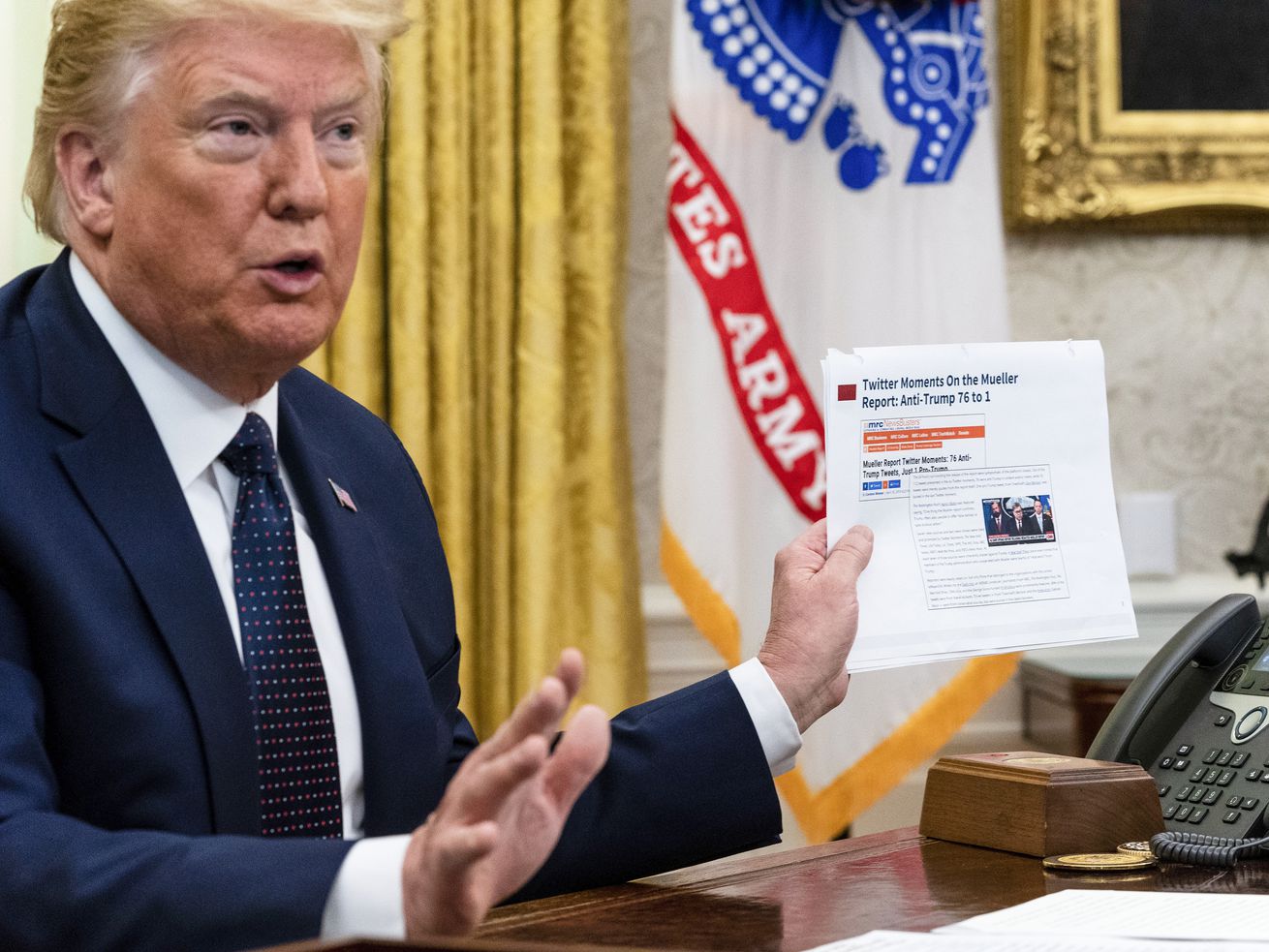 President Trump in the Oval Office before signing an executive order related to social media regulation on May 28. | Doug Mills-Pool/Getty Images

It won’t hold up in court. That’s not the point.

President Donald Trump’s executive order attempting to change the protections enjoyed by thousands of websites and social media platforms likely won’t achieve its stated goal: fundamentally altering the law that governs how much of the internet works.

But that doesn’t mean it’s useless. The executive order might do markedly little, but it symbolizes a great deal about the president and his understanding of his voters. In short, Trump perceives that his voters care a great deal about purported censorship aimed at conservatives on social media platforms, and wants to signal his resolve to do something about it.

The executive order, issued Thursday, was inspired in part by Trump’s ire at having fact-checks appended to his tweets on voting-by-mail. It takes aim at social media companies and the law that protects them from lawsuits over their moderation practices or user-posted content.

The order is likely to be hamstrung in court, and perhaps even overturned, for myriad reasons. But the fight is the point: It lets Trump show his supporters and fans that he’s taking on “liberals” in Silicon Valley.

Some conservatives view Trump’s efforts to “take on” social media companies as part of an overall narrative in which Trump alone is standing up for them against leftist incursion, National Review editor Charles C.W. Cooke said.

“It’s an example of a cultural power that Trump tries to wield,” Cooke said. “And so he thinks that people will look at him running against Joe Biden and they’ll say, well, I need that guy fight my corner against all of this left-wing cultural power that is unchecked.”

It doesn’t matter that most voters, or even most Trump supporters, aren’t on Twitter.

“Whether or not his voters are on those social media platforms, that willingness [to fight] which he will recount these rallies and his emails and press releases and TV appearances, I think appeals to a lot of people,” Cooke said.

Or as Daniel Castro, president of the Information Technology and Innovation Foundation, a non-partisan group focused on tech, put it: “The executive order is more bluster than action, but that does not mean it should not be taken seriously.”

Section 230 of the Communications Decency Act is the portion of federal law that allows thousands of websites to curate, edit, delete and otherwise modify content by their users without fear of massive lawsuits. It created much of the Internet as we know it: Users (that’s you) can post third-party content (YouTube videos, SoundClouds, and Instagram posts) and websites can’t be sued over that content, even if they edit or delete it.

It was written in 1996 with the aim of protecting websites from lawsuits based on the content posted by users. As Sen. Ron Wyden, one of the co-authors of the law, told my colleague Emily Stewart last May, the law had nothing to do with creating “neutral” platforms and everything to do with ensuring that websites could exist as their creators wished.

If you want to post a comment on the conservative website HotAir.com, or on the left-leaning website DailyKos.com, or even InfoWars.com, the administrators of those websites can permit your comment without being worried about getting sued over its contents — or they could edit or delete it.

“You can have a liberal platform. You can have conservative platforms,” Sen. Wyden told Stewart. “And the way this is going to come about is not through government but through the marketplace, citizens making choices, people choosing to invest.”

But Section 230, misunderstood by even members of Congress, has been under fire for years. Over the past few years, Republican politicians like Sens. Ted Cruz and Josh Hawley have repeatedly argued — incorrectly — that Section 230 requires platforms to be “neutral,” and that they should lose their “special carve out” from the government if they “editorialize.”

“It is… ridiculous to contend that “conservatives” been “totally silenced” when, in many ways, Twitter has given them their biggest platform ever,” National Review’s David Harsanyi wrote. “Offhand, I can think of a half-dozen online personalities who have amassed more than a million followers. The only right-wingers with similar audiences in the mid-90s were radio talk-show hosts.”

Meanwhile, Democrats, riled by the presence of neo-Nazis, hate groups, and alleged disinformation campaigns on social media platforms, have raised their own calls to change the law. Sen. Elizabeth Warren has championed Section 230 “reform,” and former Vice President Joe Biden said in December 2019 that Section 230 should be “revoked” because the law permitted “falsehoods” to be published on social media platforms.

Trump’s order purports to champion “free speech” on social media platforms by redefining “unfair business practices” and asking federal agencies and the Department of Justice to investigate the moderation processes of private companies.

Along with revamping a system where users could submit complaints to the White House if they feel their social media postings have been treated unfairly, the order calls for social media companies to lose the protections of Section 230 if the government determines that its moderation practices are “deceptive” or “inconsistent with an online platform’s terms of service.”

Legally, the executive order opens up a host of new questions, including, “Can the federal government tell private companies what speech to permit or bar”? Courts have found that websites can kick off users for any reason — like white nationalist Jared Taylor or, just this week, right-wing activist Laura Loomer.

There may also be procedural issues with the order, which did not go through the traditional interagency review process. As a former Justice Department inspector general put it on Twitter, “This Executive Order will be a hoot. Unlawful and unenforceable.”

In addition, the order doesn’t actually attempt to change Section 230, but asks the FCC to redefine when the law applies. “The EO, assuming the draft text is accurate, will kick the can down the road, asking the FCC to come up with rules about when Section 230 applies,” Adam Steinbaugh, a First Amendment lawyer, told me. “That apparently includes not only major social media sites, but any website that facilitates user content.”

Trump can’t shut down Twitter. He just wants a fight.

Trump is particularly interested in Section 230, largely as an election-year gambit to make his argument that social media companies are unfairly censoring conservative viewpoints, his included — even if adding a fact-check to a tweet is not censorship.

This is the narrative Trump is pursuing, Cooke told me. “Silicon Valley is dominated by people [on the left],” he said. “And this frustrates conservatives who say, well, it doesn’t matter how many elections we went, we are nevertheless impotent to resist change and the shaping of narratives.

“Of course progressive say the opposite, which is it doesn’t matter how much cultural power we have, [all] power and all the money is on the right,” he said. “Which isn’t quite true, and nor is the cultural objection of conservatives. But that’s how they feel. And I think Trump more than most Republican politicians is an emblem of that frustration.”

It might seem odd for Trump to focus on Twitter as a platform, given that just 22 percent of American adults use Twitter and most of those who do rarely tweet. (Democrats criticizing social media companies are more likely to criticize Facebook, which has a broader user base.)

Twitter is a medium for the Extremely Online of all political stripes, and many conservatives view debates over Trump’s tweets, even the most repulsive ones, as fodder for “online political news junkies,” separate from the issues they think motivate working-class white voters who Trump needs to keep on his side. So why would the president of the United States make a reelection push based on a social media platform most of his voters don’t use?

Cooke said that it all had to do with Trump’s need for a “fight” — and he noted that voters who aren’t active on social media platforms might be more willing to accept Trump’s argument that conservatives are unfairly censored. Trump himself is framing his fight against Twitter as a culture war, tweeting attacks aimed at a single Twitter employee, even appearing to threaten the existence of the platform itself. And his campaign is already fundraising off the fight.

“Twitter is interfering in the 2020 Election by attempting to SILENCE your President,” his campaign emailed supporters on Thursday, accusing the “Fake News Media” of “working hand in hand with liberal platforms like Twitter to wrongly CENSOR conservative voices.”

“We can’t let them get away with it,” the email continued before asking for donations.