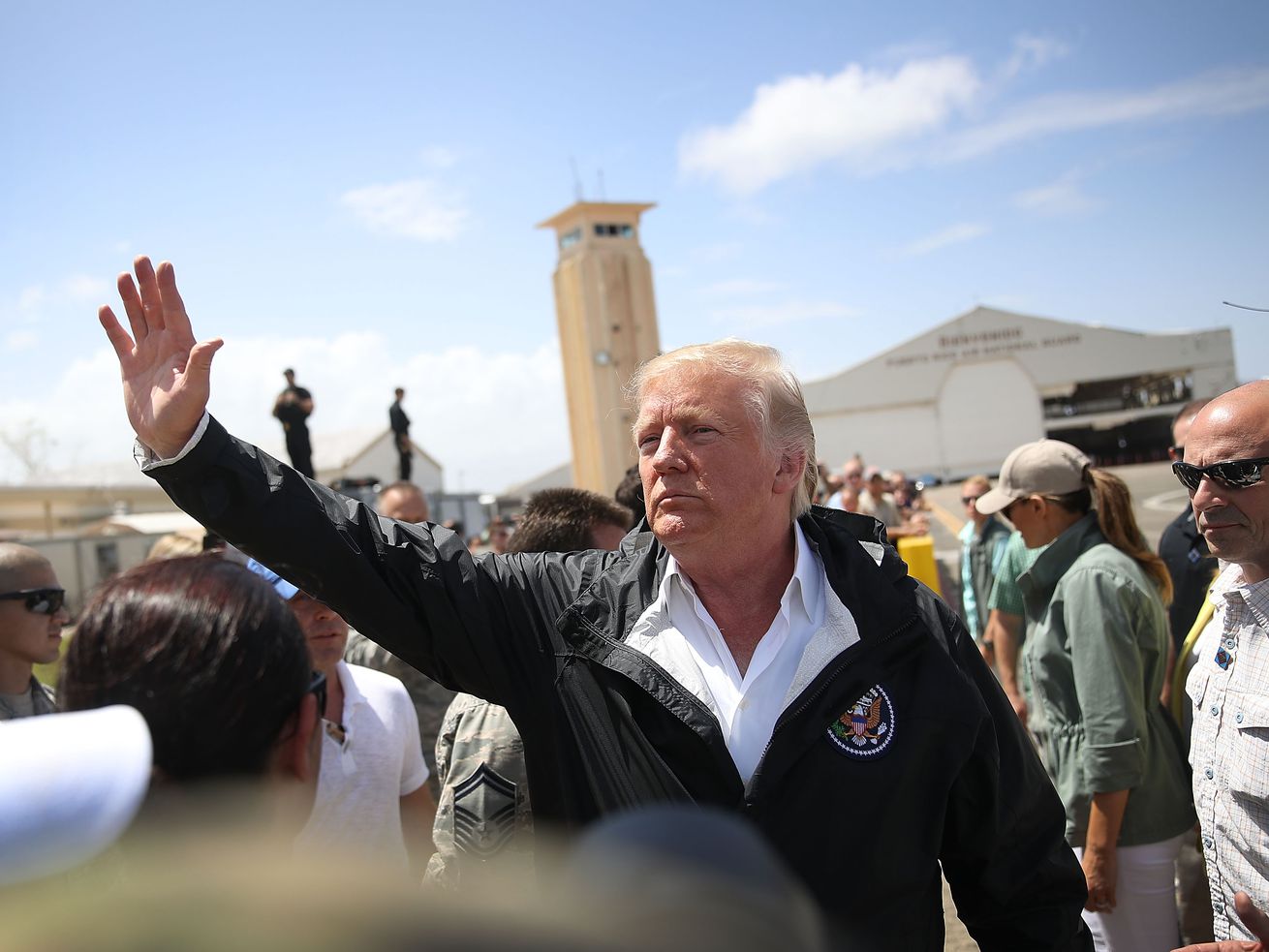 This is who he is.

The falsehoods President Donald Trump tweeted Thursday morning about the Hurricane Maria death toll are disturbing. They’re also a perfect encapsulation of Trump’s political strategy: a complete disdain for the truth, the attribution of all dissent to partisan animus, and just-beneath-the-surface racial appeals.

In two tweets, Trump cast doubts on the rigorous statistical research finding that roughly 3,000 people died in Puerto Rico from Hurricane Maria, accusing the work by researchers at one of America’s leading universities as “being done by the Democrats in order to make me look as bad as possible.”

My colleague Alexia Fernández Campbell has already corrected the factual record, explaining why the 3,000 estimate is plausible and the ways the Trump administration bears responsibility for many of those deaths.

But Trump doesn’t seem to care about the facts of the case here. He’s running his standard political playbook, the same one he’s used to conquer the Republican Party and ultimately win the presidency.

It starts with saying blatantly untrue things that make Trump look better. It continues by claiming any disagreement with his version of reality is politically motivated. And all throughout, the argument involves coded or not-so-coded racial appeals, giving license for white Americans to ignore the suffering of people of color and allowing them to dismiss allegations of racial injustice as political correctness run amok.

3000 people did not die in the two hurricanes that hit Puerto Rico. When I left the Island, AFTER the storm had hit, they had anywhere from 6 to 18 deaths. As time went by it did not go up by much. Then, a long time later, they started to report really large numbers, like 3000…

…..This was done by the Democrats in order to make me look as bad as possible when I was successfully raising Billions of Dollars to help rebuild Puerto Rico. If a person died for any reason, like old age, just add them onto the list. Bad politics. I love Puerto Rico!

Breaking down the Puerto Rico tweets, all three of these elements are at work. Trump starts by asserting flatly that “3000 people did not die in the two hurricanes that hit Puerto Rico,” despite rigorous studies from researchers at George Washington University arriving at that number (and a Harvard study suggesting it might even be understated).

Trump doesn’t explain why his response was adequate. He doesn’t challenge the logic of the study. Instead, he makes something up — claiming the studies attributed deaths from old age to the storm — to attack instead.

The studies don’t do that, of course, but Trump doesn’t care. In Trumpism, the truth is subordinate to political necessity — shifting to fit whatever Trump believes makes him look best.

2) Turning everything into partisan politics: “This was done by the Democrats”

Such blatant lying wouldn’t work if it weren’t for the second feature of Trumpism in the tweets, the reduction of everything to partisan politics.

When Trump says the studies were “done by Democrats,” he’s not saying that he knows the scholars in question were registered Democrats. Rather, he’s signaling to Republicans that to accept the nonpartisan death tolls is to side with Democrats over him. It’s to turn an issue that has no obvious ideological valence — how many people died from a storm? — into one on which people have to pick sides. Either you’re with Trump or you’re against him.

This is the essence of Trump’s political success. Consciously or not, he has identified that partisanship is the most powerful force in American politics. Over the past several decades, Americans have come to link their partisan identities to their sense of self and community: Your party’s success, and your enemy’s defeat, matters to you on a deep personal level. People care less about the details of policy, and getting the facts right, than about their team beating the other one.

“The more sorted we become, the more emotionally we react to normal political events,” University of Maryland political scientist Lilliana Mason writes. “The angrier the electorate, the less capable we are of finding common ground on policies, or even of treating our opponents like human beings.”

This is the dynamic Trump exploits. Roughly 84 percent of Republican voters approve of Trump, according to recent poll averages. Any Republican legislators or officials who aggressively call out Trump for his Puerto Rico tweets are now signaling that, in Trump’s eyes, they’re siding with the Democrats and against the president. Trump is counting on Republican elected officials being too afraid of appearing to back the other team to call out his lies.

So far, that’s been a smart bet: Republicans generally keep quiet about Trump’s lies, offer weak condemnations, or actively back them.

NOW!: @ChuckGrassley told reporters he doesn’t want to comment on the president’s tweet but that he also notes the difference in original death toll reported and the estimate now.

“I’d like to know why that is – and I think the president is in a position to find out”, he sai.

“Casualties don’t make a person look bad, so I have no reason to dispute these numbers,” House Speaker Paul Ryan told reporters when asked about Trump’s tweet blaming Dems for PR death toll. “It’s an isolated island that lost its infrastructure and power for a long time.”

Believing Trump ends up becoming official party doctrine, and key beliefs of Republican voters. We’ve seen it happen with special counsel Robert Mueller, where 75 percent of Republicans believe the Russia investigation is a “witch hunt.” I wouldn’t be surprised if in the next two days, polls show that a majority of Republicans side with Trump on the Puerto Rico death toll.

This brings us to the third element at work in these tweets — thinly veiled racism. The blatant disregard for the actual loss of life in Puerto Rico, on top of the botched response to the hurricane itself, suggests that largely Latino residents of Puerto Rico don’t really matter to the president. Contrast this with the far more robust responses to Hurricanes Harvey and Irma last year (which hit Texas and Florida) and the implicit message is clear.

When Trump says “I love Puerto Rico,” he’s using a cop-out he often employs when there are allegations of racial bias. During the 2016 campaign, which he kicked off by calling Mexicans rapists, he tweeted something very similar:

In both cases, Trump is doing something offensive — downplaying the suffering of Latino individuals and invoking Mexican stereotypes, respectively — while insisting that he “loves” the people he’s insulting.

It’s a classic invocation of white innocence, a twin to the “I have black friends” defense: Trump can’t be racist because, in his heart, he loves people of color. What he does matters less than how he feels.

This does two things for his heavily white fans. First, it gives them an out for having to care about racial injustice — so long as they care in their heart, they (like Trump) are not complicit in racism. Second, it allows them to dismiss anyone who brings up race of “race-baiting” or “political correctness.” Their own racial grievances, which Trump frequently inflames, can be recast as a reaction to the other side’s hectoring. The insistence on white innocence becomes a justification for racism.

These three elements — denial of the truth, partisanship in everything, and the politics of white identity and innocence — represent the beating heart of Trump’s political appeal. No Republican in recent memory had so adroitly exploited these things to win power and get away with otherwise inexcusable policy failures — like a hurricane response that contributed to the death of 3,000 American citizens.