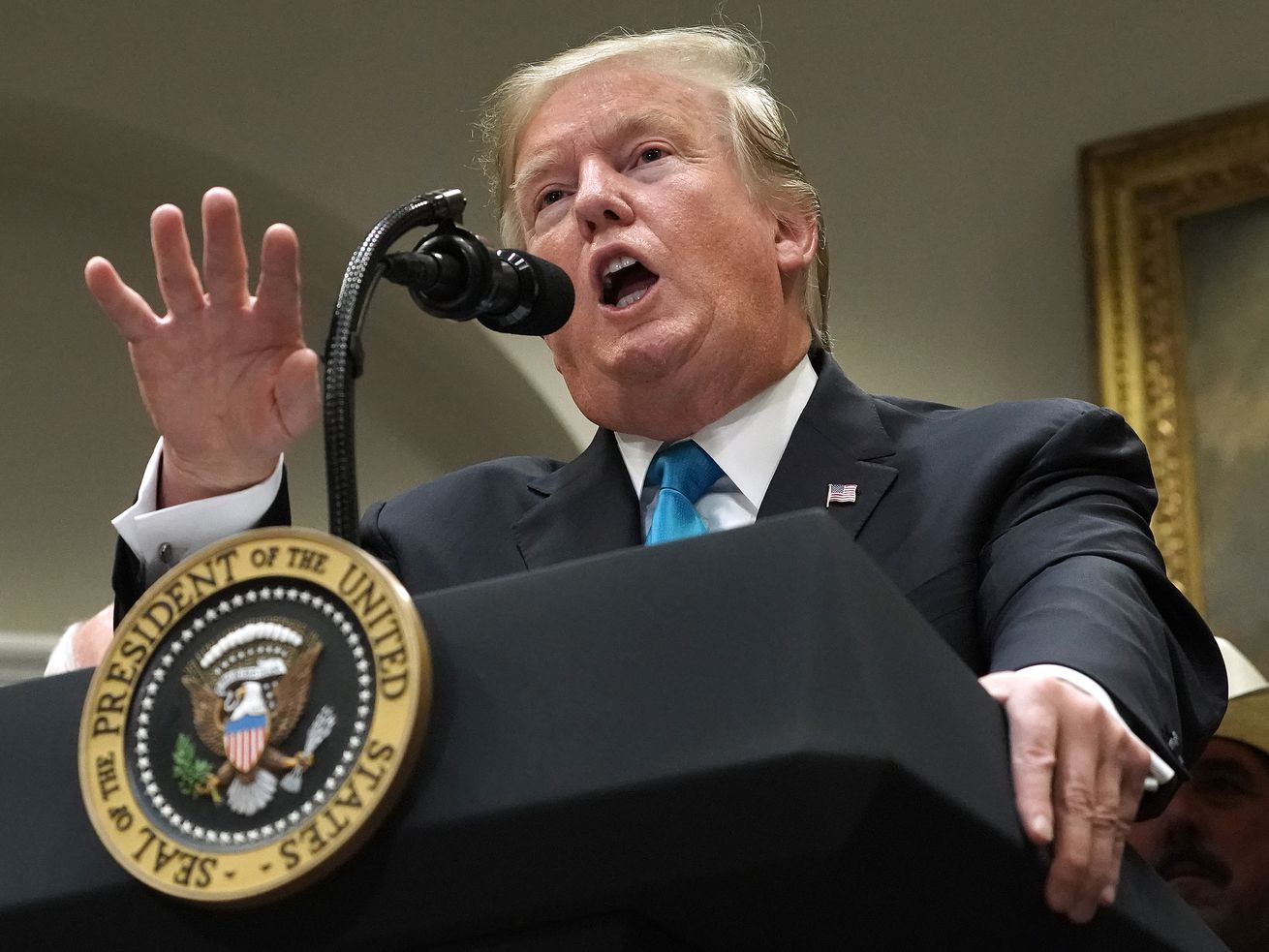 Trump called himself a “very stable genius,” after Pelosi suggested his family or staff should have an “intervention.”

President Donald Trump questioned House Speaker Nancy Pelosi’s mental fitness on Thursday, just a few hours after Pelosi said she wished the president’s family or staff would “have an intervention, for the good of the country.”

Trump, who has largely held off insulting Pelosi until now, went off on the House speaker during a Thursday press conference ostensibly about aid to farmers, calling her “crazy Nancy,” and a “mess.”

“They sort of feel she’s disintegrating before their eyes,” Trump said at one point — saying Pelosi didn’t understand an impending trade deal between the US, Canada, and Mexico.

Trump’s insults followed an infrastructure meeting at the White House on Wednesday that ended with Trump walking out, refusing to work with Democrats on infrastructure until they halted their investigations into him.

The president seemed especially fixated on Democrats’ characterization of him after Wednesday’s infrastructure meeting. Trump called himself a “very stable genius” during the Thursday press conference, introducing members of his staff one by one to come up and talk about how calm he was at the meeting.

Pelosi fired back quickly in a Thursday tweet, using Trump’s own words.

“When the ‘extremely stable genius’ starts acting more presidential, I’ll be happy to work with him on infrastructure, trade and other issues,” she tweeted.

When the “extremely stable genius” starts acting more presidential, I’ll be happy to work with him on infrastructure, trade and other issues. https://t.co/tfWVkj9CLT

What had been a tenuous working relationship between Trump and Pelosi is now extremely fraught. As Democrats move along with their investigations of the president, it could only get worse.

Pelosi said she’d “pray” for the president. He responded by calling her crazy

Hours before Trump’s press conference, Pelosi went on the offense at her weekly press conference on Thursday, saying the president had pulled a “stunt” refusing to talk to Democrats about infrastructure.

“He’s a master of distraction,” she told reporters. “I think what really got to him was these court cases and the fact the House Democratic caucus is not on a path to impeachment. That’s where he wants us to be.”

With several of her Democratic members called for an impeachment inquiry this week, Pelosi has treaded carefully, saying she believes Trump is trying to goad House Democrats into impeaching him. Pelosi told reporters the House is not on a path to impeachment at this point and will continue with their investigations instead.

But Pelosi also managed to get under Trump’s skin, suggesting members of his family and staff should hold an “intervention,” and repeating that she would “pray” for the president. Pelosi took other jabs, telling reporters she once asked the president who was in charge at the White House, due to his frequently changing decisions.

“I said one time, ‘who’s in charge, because you agree and then all of sudden, something changes,’” Pelosi said. “What goes on there? Who’s in charge? He says he’s in charge and I suspect he may be … because I don’t think any responsible assistant to the president of the United States advised him to do what he did yesterday.”

Even though Trump left the infrastructure meeting angry over Democrats’ investigations, Pelosi told the press she believes it was an excuse, and the president simply wasn’t prepared to explain how he would pay for an infrastructure package.

“He obviously not prepared, using some excuse to go out the door,” Pelosi said. “He did not take responsibility for his irresponsible behavior because we pointed out the truth.”

But the House speaker said she was very open to meeting with Trump again if he was ready to talk about infrastructure or other policy issues. After the president’s latest outburst, that may be more difficult to do.