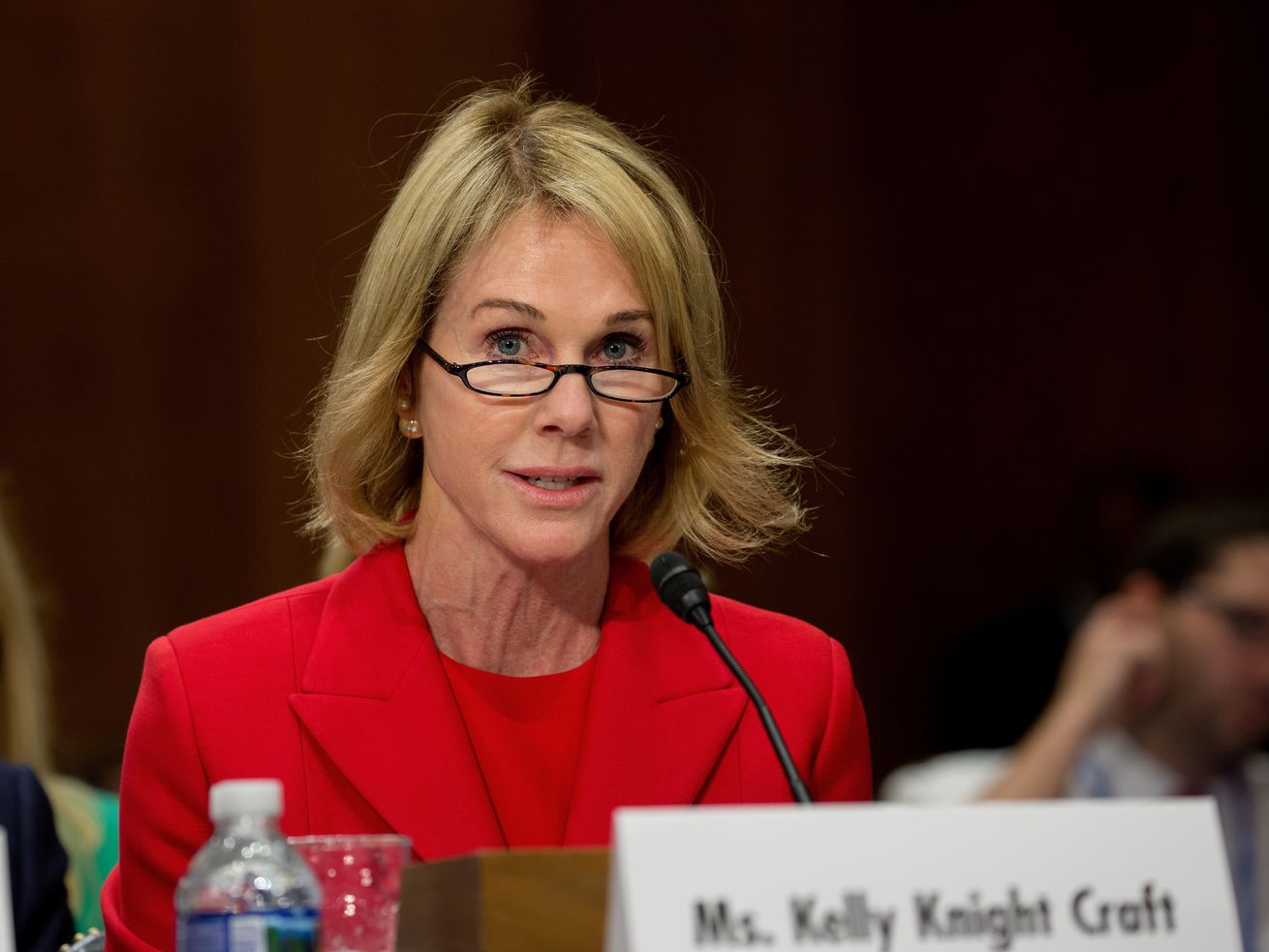 The GOP donor and current US ambassador to Canada will fill a position that’s been vacant for months.

President Donald Trump has formally nominated Kelly Craft to be the next US ambassador to the United Nations, finally moving to fill a top diplomatic position that has been open for months.

Craft has served as the US ambassador to Canada since September 2017. Trump announced his plans to name her to the post in February after a snafu with his original nominee, Heather Nauert. But his administration only submitted Craft’s name to the Senate this week.

If confirmed, Craft will replace Nikki Haley, who left the post at the end of 2018 after nearly two years on the job. Jonathan Cohen, a career diplomat who became Haley’s deputy in June 2018, has served as acting UN ambassador since January 2019. The Trump administration also just submitted his nomination to the Senate to serve as US ambassador to Egypt, meaning he’ll likely be gone soon too.

Trump had originally planned to select Nauert, the former State Department spokesperson, to replace Haley. The choice was met with some skepticism, given her lack of diplomatic and foreign policy experience. Ultimately, Nauert withdrew herself from consideration following reports that she had previously employed a nanny who lacked US work authorization.

Haley, during her tenure, managed to strike a balance between Trump’s “America First” worldview and a more traditional Republican foreign policy. The former South Carolina governor had also demanded that the US ambassador to the UN role remain a Cabinet-level position while she held the role. But there’s no guarantee it will remain that way if Craft takes over — which could potentially diminish her influence within the administration.

Craft was unanimously confirmed by voice vote to be the US ambassador to Canada in August 2017, but her nomination to UN ambassador will probably be a bit more contentious.

Here’s what she has going for her: In addition to that prior Senate endorsement, Craft, who hails from Kentucky and whose husband is a major coal magnate, has a key ally in her corner. She was reportedly recommended by Senate Majority Leader Mitch McConnell, which would seem to bode well for her nomination’s chances of approval.

But she also likely got her posting as US ambassador because she’s a major donor to GOP causes as well as the president’s campaign. In 2016, Craft donated more than $260,000 to Trump’s campaign; her husband, Joe Craft, donated about $1 million to Trump’s inaugural committee. Both she and her husband were Kentucky state finance chairs for Mitt Romney’s presidential campaign in 2012.

Presidents — Democrats or Republicans — often appoint donors and other supporters to cushy ambassadorship gigs. But the high-profile UN ambassador role tends to be a job for experienced statespeople or those with deep foreign policy or diplomatic credentials.

Craft did serve as part of the US delegation to the UN under President George W. Bush in 2007. And she has gained experience during her tenure as ambassador to Canada, where she played a role in helping to renegotiate NAFTA, now known as the United States-Mexico-Canada Agreement, or USMCA.

She got herself into a bit of trouble early in her tenure as ambassador to Canada over comments she made about climate change, in which she said there were “good scientists on both sides” of the climate debate during an interview with a Canadian news outlet in 2017. That stance is sure to worry Democrats and will likely be a topic at her confirmation hearing — especially since combating climate change is among the UN’s major goals.

If confirmed, Craft will step into the role and immediately face a slew of international challenges, including refugee crises in places such as Myanmar, Syria, and several parts of Africa because of instability in counties such as the Central African Republic and South Sudan; political turmoil in Libya and Sudan; and the humanitarian catastrophe in Yemen.

Craft will also have to deal with the reality that the US is increasingly isolated on issues from the environment to migration to even health and gender initiatives. And she’ll be advocating for an administration that views multilateral institutions — the UN included — with a strong degree of suspicion, if not outright disdain.