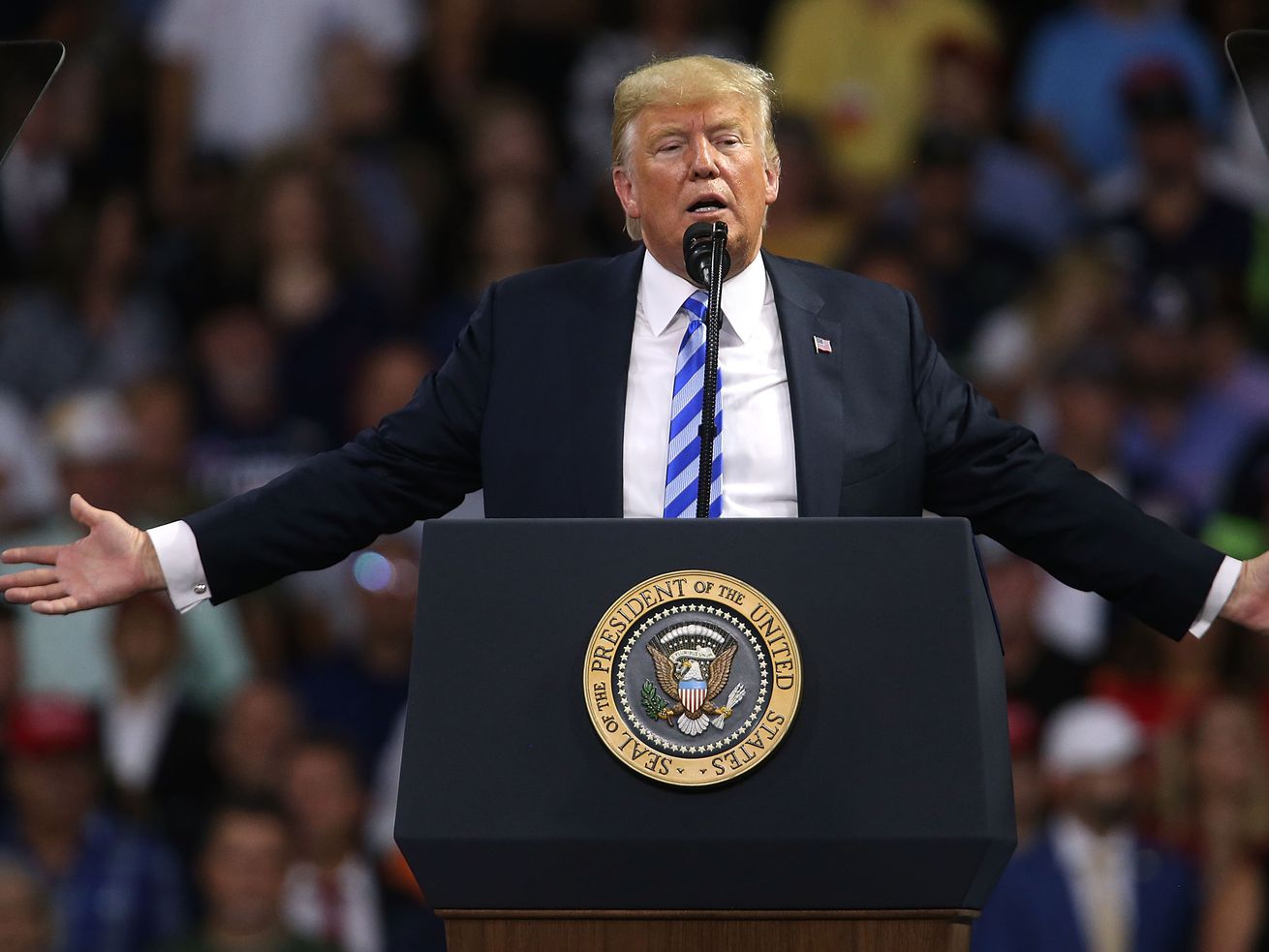 What the reactions to Paul Manafort’s trial and Mollie Tibbetts’s death tell us.

This is, of course, exactly how President Trump wants it.

Trump has eagerly adopted Tibbetts’s death as the latest argument for his immigration crackdown — wall and all — because authorities believe Rivera is an unauthorized immigrant.

To Trump’s critics, it seems crass at best, and opportunistic at worst. After all, the same evening that Rivera was arrested, Trump’s former campaign manager had been convicted on eight counts, and his former personal lawyer and “fixer” had implicated the president himself in a violation of federal campaign finance law. To focus instead on Tibbetts had a whiff of desperation about it, from a president who’s often been accused of trying to distract the press from bad news by feeding the base red meat.

But it’s wrong to think of Trump’s use of Mollie Tibbetts only in terms of his anxiety over his associates’ legal troubles, to see it as a cheap distraction from the “real story” of the Trump presidency. The central motif of Donald Trump’s political career since he launched a long-shot run for president is this: He has mobilized people to support him (and his immigration agenda) by preying on their fear that an unauthorized immigrant will kill their children.

It’s an incredibly powerful and very real fear — one that is immune to facts and figures about low immigrant criminality and rejects any question of policy trade-offs. And stoking it has worked so well for so long.

The launch of his presidential campaign in June 2015 was treated as a curiosity until he referred to Mexican immigrants as rapists and murderers. The press coverage he got for those comments (which he gleefully ate up) gave him an early boost in the polls and, crucially, a new set of allies: “Angel Families,” people who’d become politically mobilized (and associated with anti-immigrant groups) after their relatives were killed by unauthorized immigrants.

Trump’s first major rally featured not only former Maricopa County Sheriff Joe Arpaio (an infamously hardline immigration hawk whom Trump pardoned in 2017) but an Angel Parent. A group of Angel Families took the stage at the 2016 Republican National Convention.

This very specific strain of immigration hawkery — the fear of murder by an immigrant — is the reason Trump had a constituency in the early, freewheeling days of his campaign. It isn’t merely one of the many obsessions of a president whose personality drives his White House; it is where his rapport with his culture-warrior “base” aligns with the substance of the policies he has pursued in office. It is a strategic linchpin.

When the White House worries it’s losing an immigration argument, it goes back to the murder specter. When Trump faced a potential government shutdown in January over a legislative fix for the Deferred Action for Childhood Arrivals (DACA) program, the Trump administration put out an ad saying that Democrats would be “complicit” in any murders committed by unauthorized immigrants during the shutdown. When the Trump administration’s policy of family separation at the US-Mexico border was dominating the headlines in late June, the White House convened a gathering of relatives who had been “permanently separated” from their families.

But it’s not just a defensive tactic. Memorializing victims of immigrant crime is a staple of Trump’s formal, scripted speeches.

Trump has already made it clear that he intends to make the murder of white women by unauthorized immigrants a campaign issue not just in the 2018 midterms but in the 2020 presidential election. He said as much in November 2017, when Jose Ines Garcia Zarate, who killed Kate Steinle in San Francisco in 2015, was acquitted of murder and involuntary manslaughter. Trump had used Steinle’s murder in the same way he is now using Tibbetts’s — even more pointedly, as Garcia Zarate had been released from jail in the “sanctuary city” of San Francisco before killing Steinle.

The jury was not told the killer of Kate was a 7 time felon. The Schumer/Pelosi Democrats are so weak on Crime that they will pay a big price in the 2018 and 2020 Elections.

Tibbetts’s disappearance was already a national news story. The story’s denouement — the arrest of an unauthorized immigrant who was a stranger to Tibbetts — just happened to align perfectly with tropes Trump has been using for years. (They align so perfectly, in fact, that I’ve already seen some liberals assume that the whole thing was a setup to scapegoat unauthorized immigrants and help Trump.)

Part of this is because Tibbetts, like Kate Steinle, was a young white woman. But in large part, it’s because the inexplicability of Tibbetts’s disappearance — and the fact that a stranger was ultimately arrested for her murder — tapped into the powerful fear that something like this could happen to anyone.

Murder by a stranger may be the rarest type of murder, but it inspires the most public terror, because there’s no way to rebut the idea that it could happen to anyone. It almost certainly won’t — the odds are vanishingly low — but it could.

This is what is soooo wrong. Just some “Girl In Iowa.” Could be be just “your daughter, your sister, or your friend.” A murder at the hands of an ILLEGAL?!?! Trying to process. There needs to be immigration reform ASAP. Enough. https://t.co/qFBAuLbCZY

In a July survey, 53 percent of Trump voters said that the MS-13 gang posed a very or somewhat serious threat to their communities. Fifty-one percent said they were very or somewhat worried that they or a family member would become a victim of MS-13 violence.

Rationally, this fear is massively disproportionate — there are only a few thousand MS-13 members in the US, and their targets are almost always their peers in Central American immigrant communities. But fewer than half of these concerned Trump voters actually erroneously thought that MS-13 was actually the largest gang in the US. It’s not simply about people miscalculating the risk, but about the outsize fear that remote risks play.

Trump and other conservative politicians are using the immigrant murder specter to political ends; that doesn’t make the fear they’re inspiring any less genuinely felt (and it doesn’t mean that the politicians themselves aren’t genuinely worried).

Their line of thinking turns security into a binary condition: You’re either perfectly safe or you’re not. And if you’re not safe, anything that can make you feel safe is a step in the right direction. Policy is justified not on the effects it has, but on the feelings it inspires in the people whose fears are being catered to.

But only some people get to make decisions based on remote fears: people who generally live in low-crime communities where murder is something that happens only on the news. And Donald Trump is only listening to some fears — the fears of white people who see people who aren’t “like them” as generally suspicious to begin with.

In practice, this means that the fears of certain white people justify a crackdown on other people (who generally aren’t white). It means that concern about an unfamiliar face in the neighborhood is a valid reason to call police. It makes immigration policy — a complicated civil/criminal system — into a simple expression of values in the name of feelings.

Since Steinle’s death in 2015, congressional Republicans have introduced several versions of “Kate’s Law.” Some of them have in fact aimed to make “sanctuary cities” ineligible for federal grants. But most often, they simply aim to increase criminal penalties for illegal reentry after someone has been deported — something that hasn’t been shown at all to decrease unauthorized reentries but certainly sends a message of wanting to keep the unauthorized out.

The point of Trump’s use of Steinle’s murder — or Tibbetts’s, or any of the other victims he’s turned into martyrs — isn’t that some particular thing could have kept them alive. It’s that because their killers should not have been in the US to begin with, anything that cracks down on people like them is justified. This sidesteps the reality that immigrants commit fewer crimes than native-born citizens; the point is that any murder by an unauthorized immigrant is too many.

“Law and order” versus the “rule of law”

If you followed the Manafort trial and the Cohen plea deal this week, you got a story about the rule of law. Independent prosecutors — Robert Mueller’s team and federal prosecutors in New York and Virginia — took down people who were close to the president of the United States because they had committed crimes. The prosecutions proved the law bound all Americans equally and no man could rise above it. It was a feel-good story, if that’s what is important to you about law.

If you followed the denouement of the Mollie Tibbetts saga, you got a story about law and order. A woman went missing, and her community banded together to find her. The culprit wasn’t part of that community; he was a stranger — a bad guy who shouldn’t have been there to begin with. But law enforcement officials arrested him and will bring him to justice, and federal law enforcement will make a renewed effort to prevent other people from being able to do the same thing.

For a generation before Trump, immigration and crime hawks used the language of law as much as the language of order. Deporting unauthorized immigrants for civil offenses was appropriate because the letter of the law allowed it; it needed no other justification. But that wasn’t really what motivated the voters who supported them. They cared about immigration because they cared about preventing disorder, cultural as well as criminal. They had an America they wanted to protect, and they needed to see firmer borders drawn around it.

Trump rejected the language of the “rule of law” at the outset. And his actions and the actions of his allies have turned the idea into an anachronistic joke.

As Trump mourns the death of Mollie Tibbetts, he complains about his former campaign manager — a “nice man” — getting charged and convicted for tax fraud. As the White House puts out an official video capitalizing on Tibbetts’s death, Trump lawyer Rudy Giuliani complains that because politicians violate campaign finance law all the time, it’s unfair of prosecutors to charge Trump’s personal lawyer Michael Cohen for it.

Fox News follows their lead; with them go many American conservatives. They do it not just because of blinkered hypocrisy but because the ideals of the “rule of law” were never really what drew them to the cause.

The Manafort and Cohen prosecutions don’t do anything to protect a feeling of safety. They feel less immediate, and don’t guard against the fear that your daughter will die.

When the Trump administration refers to Mollie Tibbetts as “permanently separated” from her family, they’re not just trolling critics still outraged at Trump’s separation of families at the US-Mexico border. They’re expressing that Tibbetts’s death is a loss that cannot be recouped — a disruption of order that can never be patched. And that suggests that because the safety of a family can be so easily ruptured, nothing that can possibly be done in the name of preserving order is too much.