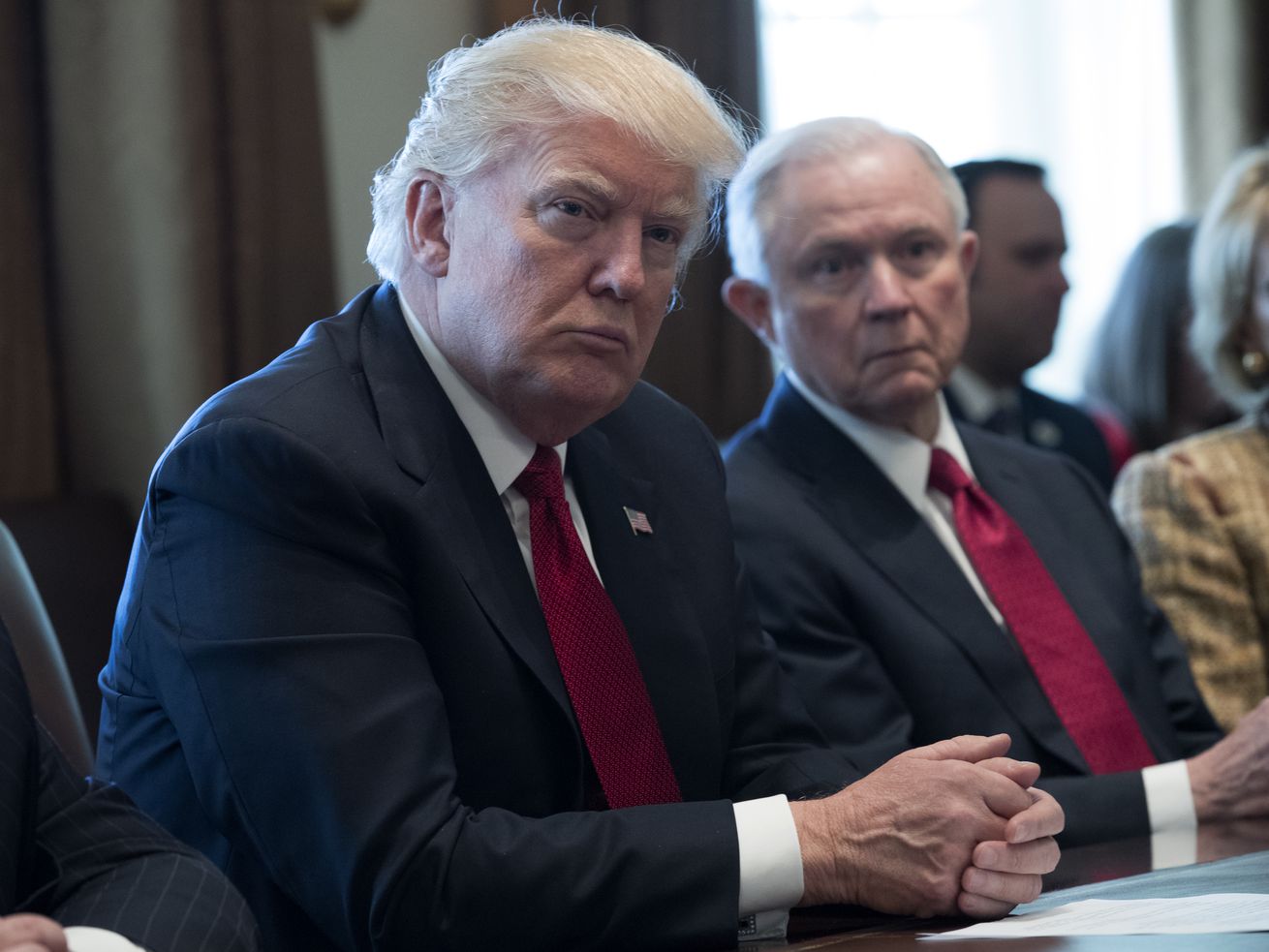 The president thinks the attorney general should have at least waited until after the midterms to address Chris Collins’s and Duncan Hunter’s alleged crimes.

President Trump has found yet another reason to be mad at Jeff Sessions: He thinks the attorney general shouldn’t have indicted Reps. Chris Collins (R-NY) and Duncan Hunter (R-CA) because it might hurt Republicans’ chances in the 2018 midterms.

On Monday, Trump blasted Sessions on Twitter over charges brought against Collins and Hunter last month. Collins was charged with insider trading and Hunter with using campaigns funds for personal use. Both were among the first members of Congress to endorse Trump in the 2016 election.

“Two long running, Obama era investigations of two very popular Republican Congressman were brought to a well-publicized charge, just ahead of the Mid-Terms, by the Jeff Sessions Justice Department,” Trump tweeted on Monday. “Two easy wins now in doubt because there is not enough time. Good job Jeff.”

In a subsequent tweet, he quipped that the Democrats “must love [Sessions] now.”

Two long running, Obama era, investigations of two very popular Republican Congressmen were brought to a well publicized charge, just ahead of the Mid-Terms, by the Jeff Sessions Justice Department. Two easy wins now in doubt because there is not enough time. Good job Jeff……

….The Democrats, none of whom voted for Jeff Sessions, must love him now. Same thing with Lyin’ James Comey. The Dems all hated him, wanted him out, thought he was disgusting – UNTIL I FIRED HIM! Immediately he became a wonderful man, a saint like figure in fact. Really sick!

The tweets sparked immediate turmoil because they suggested that Trump would prefer the Justice Department put off acting on alleged crimes in the name of political expediency and election wins. For the DOJ to do so would raise serious ethics questions.

It is Justice Department custom for prosecutors to avoid public disclosure of investigative steps that could impact elections or indictments within 60 days of an election. But that’s a norm, not a law (then-FBI Director James Comey didn’t abide by it when he sent a letter to Congress days ahead of the 2016 election about Hillary Clinton’s emails). And the charges against Collins and Hunter were brought well outside of that 60-day window.

Trump also seems to be fudging the timeline on the Collins investigation by implying it was an Obama-era matter only. The charges against him center on calls he made to his son Cameron Collins to give him information about the Australian biotech company Innate Immunotherapeutic in the summer of 2017, months after Trump took office. Preet Bharara, a former US Attorney for the Southern District of New York who was fired in March 2017, tweeted that Collins “was not an Obama era investigation” on Monday.

Chris Collins was not an Obama era investigation. FYI. https://t.co/IQqdpTvS60

It’s not clear when the investigation into Hunter began. The Los Angeles Times reported an FBI probe into his use of campaign funds in March 2017.

Trump’s tweets are a big deal. Who knows if Republicans will actually do anything about it?

Trump is already under scrutiny for potential obstruction of justice in special counsel Robert Mueller’s investigation, and his Monday tweets probably won’t help the impression that the president sees the Department of Justice as a political tool instead of an apolitical entity. Both Democrats and Republicans expressed alarm at Trump’s tweet, but whether there will be any consequences is unclear.

I’ve been thinking about the below statement from @realDonaldTrump. Elections are coming is not a legitimate legal defense. Trump is thus corruptly endeavoring to influence two investigations by pressuring Jeff Sessions to not proceed with the cases. That’s Obstruction of Justice https://t.co/P68706zjcw

AshLee Strong, a spokesperson for House Speaker Paul Ryan, told CNN that the Justice Department “should always remain apolitical, and the speaker has demonstrated he takes these charges [against Collins and Hunter] seriously.”

A senior Justice Department official told Axios the tweet was “concerning” and shows the president things the DOJ should be used “as a weapon against enemies and a tool to win elections.”

“The United States is not some banana republic with a two-tiered system of justice,” Sen. Ben Sasse (R-NE) said in a statement, adding that the job of the president is “to defend the Constitution and protect the impartial administration of justice.”

Retiring Sen. Jeff Flake (R-AZ) said this was the president looking to use the Justice Department “to settle political scores.” On Tuesday, Flake said he would address Trump’s tweets on the Senate floor later in the day.

This is not the conduct of a President committed to defending and upholding the constitution, but rather a President looking to use the Department of Justice to settle political scores. https://t.co/E74YmhD4dB

Despite the bipartisan pushback, it’s unclear what consequences — if any — there will be for Trump. Republicans in Congress have demonstrated a continued reticence to rebuke the president, and it’s unlikely his Labor Day tweets will change that.