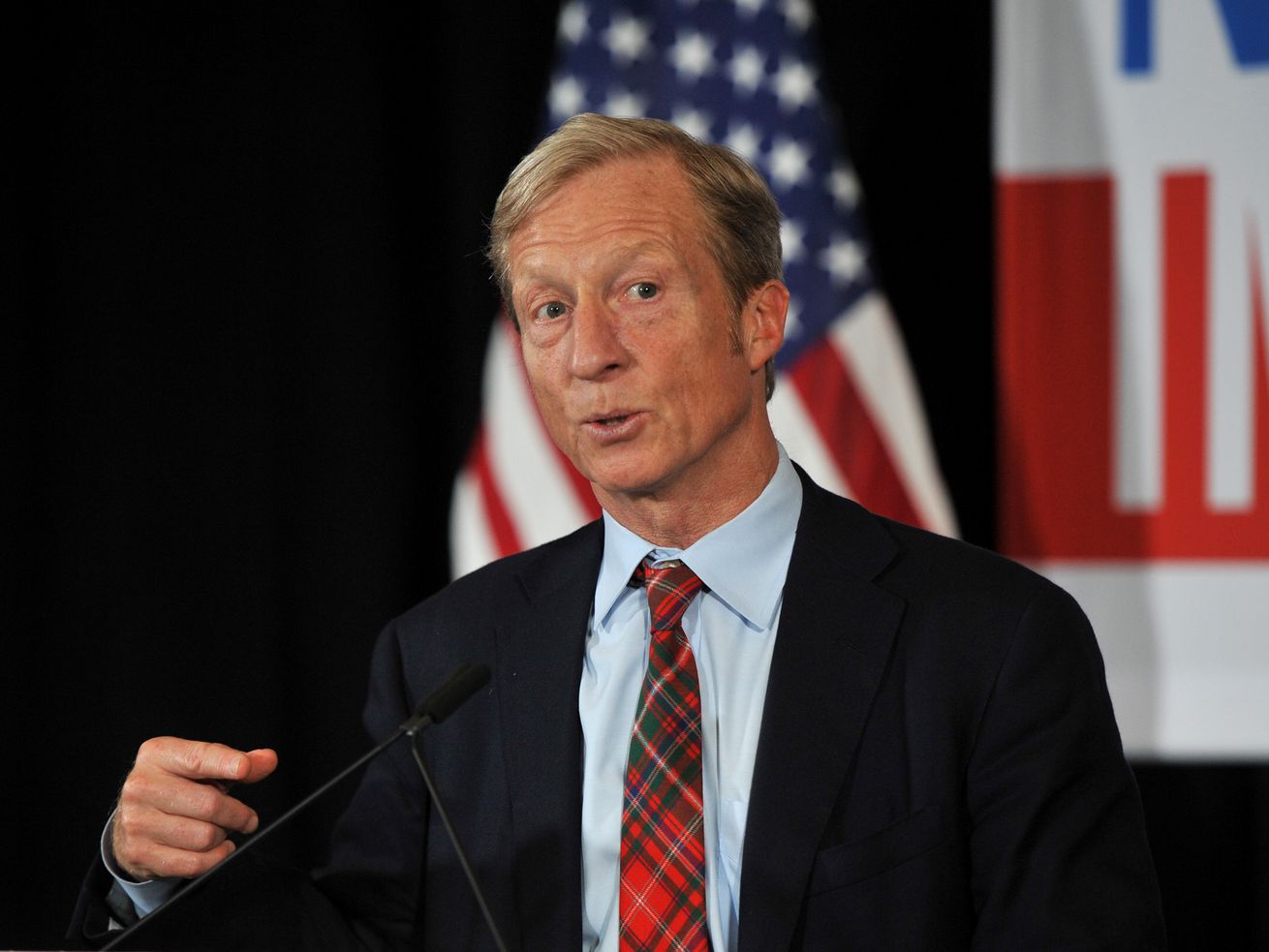 The billionaire jumped in the race late. Here’s his background and platform.

California billionaire Tom Steyer jumped into the Democratic presidential contest relatively late, announcing his campaign in July. And though he’s never held or run for elective office before, he’s a noteworthy figure in the race for one main reason: He’s a billionaire.

Steyer says he plans to spend at least $100 million on his campaign, which is far more than any other Democratic candidate has raised so far. Money certainly isn’t everything in political campaigns, and self-funded candidates have decidedly mixed track records at the polls. But in a crowded field, Steyer’s enormous spending on ads will ensure he’s able to get his message in front of voters.

The question, of course, is whether voters will be won over by that message — and the candidate behind it.

Steyer’s platform emphasizes fighting climate change and structural political reforms such as term limits for members of Congress and creating a national referendum process. Steyer has also been a prominent advocate of impeaching President Donald Trump. Impeachment would obviously not be on the agenda anymore should a Democrat win the 2020 election, but Steyer could make it a more prominent issue in the primary, which could impact House Democrats’ debate on the topic.

When it comes to his personal qualifications, Steyer has touted his combination of business experience (he started a hedge fund) and activism experience (with climate change being his biggest issue). Perhaps more to the point, Steyer has been the single biggest donor in disclosed political giving over the 2014-2018 election cycles, spending $245 million dollars over that timespan, all to help Democrats. (Though it’s possible that other rich people spent more in undisclosed “dark money.”)

But of course, Steyer has many weaknesses. Most notably, an increasingly progressive Democratic electorate might have zero interest in choosing a hedge fund billionaire megadonor as their nominee. Beyond that, his fund’s investment history could open him up to attacks on the left. And Steyer’s electoral strength is untested, since he’s never run for public office before.

Who is Tom Steyer?

Growing up on Manhattan’s Upper East Side as the son of a Wall Street lawyer, Steyer spent his adolescence and early adulthood moving through a set of elite academic and financial institutions — Phillips Exeter Academy for high school, Yale for his undergraduate years, Morgan Stanley after graduating, and Stanford for business school, and then Goldman Sachs.

At Goldman, Steyer worked on the risk arbitrage desk under future Treasury Secretary Robert Rubin. Risk arbitrage is essentially an effort to bet on the likelihood that a merger or corporate event will go through. At the time, it was “the hottest game on Wall Street,” per the Washington Post, and Rubin’s tenure became somewhat legendary: he’d later rise to co-chair of Goldman Sachs and then US Treasury secretary under President Bill Clinton.

But after less than three years at Goldman learning the business, Steyer left the firm to move to San Francisco and strike out on his own. In 1986, he founded his own hedge fund, Farallon Capital Management. It would make him a billionaire, and by the time Steyer retired in 2012, he has said the fund was managing about $20 billion in assets.

Steyer became one of the biggest Democratic donors, if not the biggest

Over the past decade, Steyer has become an increasingly prominent Democratic donor, attempting to influence politics both in California and nationally.

His major focus was climate change — he founded the nonprofit group NextGen Climate in 2013, and he gained national prominence by supporting a campaign to get the Obama Administration to block the proposed Keystone XL pipeline. (Obama eventually did block the pipeline, but Trump tried to restart it, and it’s currently tied up in court.)

Steyer has also launched a major voter registration push aimed at young voters, sat on the board of the Democrat-aligned think tank the Center for American Progress (until recently), and was involved in the liberal donor group the Democracy Alliance. He mused about running for either governor or senator in California, but did not choose to do either.

Instead, Steyer spent heavily on elections to try to help Democratic candidates. Through his family office Fahr LLC, Steyer was the biggest disclosed political giver in both the 2014 and 2016 election cycles, and he was number two in 2018 behind Michael Bloomberg. Over those three cycles he spent $245 million on elections, with the vast bulk of the money going to NextGen’s political arm, to be spent in support of Democrats.

How rich is Tom Steyer?

Forbes has estimated Steyer’s net worth as $1.6 billion. If accurate, that makes him quite rich, but would not put him among the upper ranks of United States billionaires (Forbes estimates Jeff Bezos is worth 100 times as much as that, Michael Bloomberg or each Koch brother is worth more than 30 times as much, and Donald Trump is worth twice as much).

However, given the pace of Steyer’s spending on political causes in recent years, there’s been speculation that the figure’s actually a significant underestimate of his wealth. A Steyer aide told the New Yorker in 2013, “the general assumption” is that he’s worth “a lot more than” Forbes’s estimate.

We will get a better idea once Steyer files the financial disclosure forms that are required for presidential candidates. He recently got an extension for that, giving him until September 22.

Steyer pushed Trump impeachment — and then started running for president

In the fall of 2017, Steyer found a new cause: the impeachment of Donald Trump.

Citing many reasons — Trump’s “relationship with Vladimir Putin and Russia,” his “willingness to exploit the office of the Presidency for his personal gain,” his “conduct” in the aftermath of the Charlottesville violence, and even his “decision to pull out of the Paris climate accords” — Steyer started a new group called “Need to Impeach,” and began a push to win more elected officials to his cause.

In the course of the effort, Steyer’s organization collected more than 8 million email addresses from anti-Trump Democrats who signed a petition. He also paid for ads in which he would personally make the case for impeachment on camera, and toured the country hosting pro-impeachment events.

All this perturbed Democratic leaders, who generally opposed impeachment, thinking it would be a political mistake and perhaps hurt their party’s electoral chances. Suspicious-minded people wondered if this effort was truly aimed at impeaching Trump — or at promoting Tom Steyer in advance of a presidential run.

This was too late to help him qualify for the early presidential debates, but he has been spending heavily on ads since then to try and meet the polling and donor thresholds to make it in for the next two debates in September and October. (It may seem tough for a billionaire to convince 130,000 people to give him money, but Steyer has been asking for people to give him $1 to get issues like impeachment and climate change on the debate stage.)

I mean, a very rich guy who had never run for office before did of course win the Republican nomination and then the presidency despite nobody believing he could, so never say never.

But Trump had some advantages Steyer doesn’t, such as his preexisting celebrity and ability to command media attention. Trump also took issue positions that distinguished himself from the Republican establishment — for instance, he was far more anti-immigration, but he promised not to cut Social Security or Medicare.

Steyer may be trying to follow the Trump model by branding himself as a bold supporter of Trump’s impeachment — something the Democratic base badly wants, but its party leaders in the House still oppose. But it might be a tough sell for one of the biggest Democratic mega-donors to portray himself as a political outsider. Trump also surged to the top of the polls within weeks of entering the race, but Steyer has not (though he has hit the low single digits in a few, and could conceivably make the debate stage).

So Steyer is a major underdog to win. But with all that money, he certainly has the potential to make some sort of impact on the race. And with Trump’s potential impeachment likely to be a major topic on House Democrats’ agenda in the next few months, Steyer’s presence in the campaign could push his presidential rivals — and the party’s leadership — in a more pro-impeachment direction.