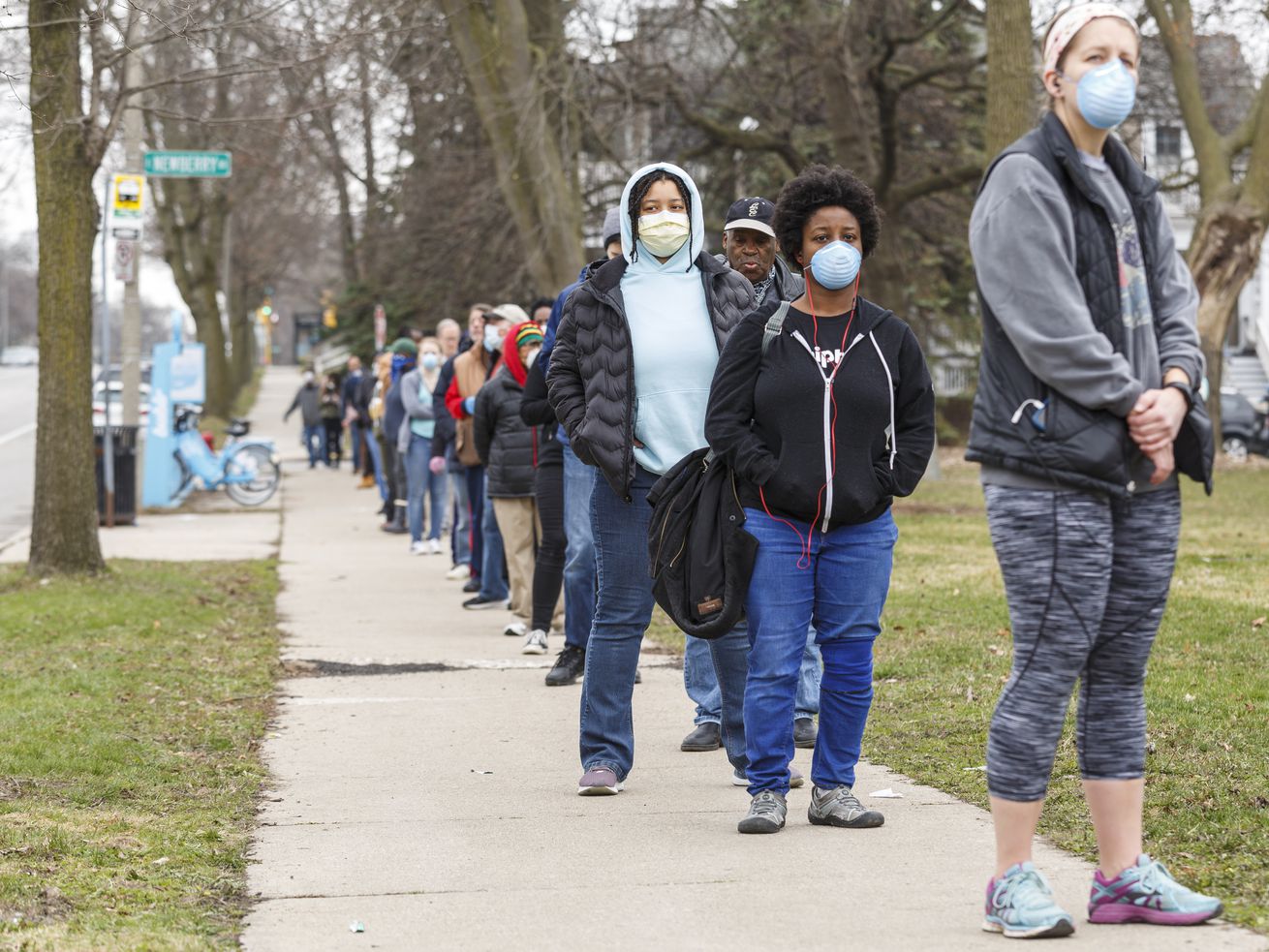 A line to vote in Wisconsin’s spring election wraps around for blocks on Tuesday, April 7, 2020 at Riverside High School in Milwaukee. Justice Daniel Kelly, who cast the key vote to lift that state’s stay-at-home order, lost that election. | Sara Stathas/Washington Post/Getty Images

On Wednesday evening, Republicans on the Wisconsin Supreme Court issued a broad order striking down that state’s stay-at-home order, which was issued by the head of the state’s health department to prevent the spread of coronavirus. Among other things, the court’s decision concludes that the state health department exceeded its authority by instructing people to stay at home, and by “forbidding travel and closing businesses” deemed nonessential.

The Court’s order was 4-3, with Justice Brian Hagedorn, a Republican initially appointed to a lower state court by former Gov. Scott Walker (R), writing one of three dissenting opinions. Justice Daniel Kelly, a lame duck who recently lost an election to retain his seat by nearly 11 points, cast the key fourth vote to strike down the stay-at-home order. If not for a Wisconsin law that allows Kelly to serve until August, the stay-at-home order may well have been upheld.

The decision appears to be animated by the kind of political considerations that are more at home on conservative talk radio than in a court of law. During oral arguments last week, when a lawyer defending the stay-at-home order pointed out that there was recently an outbreak of coronavirus in Brown County, Wisconsin, Chief Justice Patience Roggensack dismissed the significance of that outbreak because it primarily impacted factory workers.

“These were due to the meatpacking, though,” Roggensack said. “That’s where Brown County got the flare. It wasn’t just the regular folks in Brown County.”

At that same oral argument, Justice Rebecca Bradley compared the state’s stay-at-home order to “‘assembling together and placing under guard all those of Japanese ancestry in assembly centers’ during World War II.”

The majority opinion, by Chief Justice Roggensack, is not at all clear as to whether this decision takes effect immediately, or whether the stay-at-home order remains in effect for another week. Roggensack also concludes that Andrea Palm, the head of the state’s health department, exceeded her lawful authority. But then Roggensack’s opinion contains this extraordinary line: “We do not define the precise scope of DHS authority under Wis. Stat. § 252.02(3), (4) and (6) because clearly Order 28 went too far.”

Thus, as Hagedorn notes in dissent, the majority opinion “has failed to provide almost any guidance for what the relevant laws mean, and how our state is to govern through this crisis moving forward.” Wisconsin now has no stay-at-home order preventing the spread of coronavirus — or maybe it does have such an order for just one more week. And it is not at all clear which powers the state health department still has to fight the spread of a pandemic.

Moreover, one consequence of the Court’s decision is that if Palm does want to take additional steps to fight the spread of a deadly disease, she will likely need to jump through a series of procedural hoops that, at best, take weeks to complete. And her decisions can now be overridden by Republicans in the state legislature.

In the meantime, there is no court decision ordering coronavirus to stop spreading.

Wisconsin law gives the state Department of Health Services extraordinarily broad power — or, at least, it did until today — to confront a public health crisis.

Among other things, the department may “close schools and forbid public gatherings in schools, churches, and other places to control outbreaks and epidemics.” It may “issue orders … for the control and suppression of communicable diseases,” and these orders “may be made applicable to the whole or any specified part of the state.” And, on top of all that, an additional provision permits the health department to “authorize and implement all emergency measures necessary to control communicable diseases.”

Yet the majority opinion in Wisconsin Legislature diminishes this power considerably by imposing procedural limits on Palm’s authority. Much of Roggensack’s majority opinion rests on a distinction between “rules” and mere “orders.”

The reason this distinction matters is that a mere “order” from a state agency can go into effect immediately, but a “rule” can take weeks or even months to promulgate. Even under an expedited process for “emergency” rules, a state agency must first draft a “statement of the scope of the proposed emergency rule.” That statement must be reviewed and approved by the governor and the state Department of Administration, and then appear in an official state publication that only publishes once a week.

After the statement is published, the agency must complete a 10-day waiting period before it is allowed to move forward, with no apparent way to waive this requirement. And then the rule can be delayed even longer if certain legislative leaders require the agency to hold a public hearing on the new rule. Then the new rule can potentially be suspended by a legislative committee — which may require the agency to start this process all over again.

Nevertheless, the Court’s Republican majority concludes that Palm’s stay-at-home order exceeds her power to issue mere orders. Under the Court’s decision, any order that applies to a class of people that “is described in general terms,” and that can be expanded to more individuals, must be issued as a rule. That means that new efforts to fight the coronavirus are likely to be delayed for weeks or more.

There are several problems with the Court’s conclusion, but the biggest one is that it is inconsistent with the text of the state’s public health law. That law gives the health department the power to “promulgate and enforce rules or issue orders for guarding against the introduction of any communicable disease into the state” or “for the control and suppression of communicable diseases,” and it provides that “any rule or order may be made applicable to the whole or any specified part of the state.”

Thus, the statute explicitly states that the health department may issue an “order” and not just a “rule” that is applicable to the entire state.

As Justice Rebecca Dallet notes in one of three dissenting opinions, the state legislature purposely added this language to the state’s public health law to expand the health department’s power to issue statewide orders. “Originally,” Dallet writes, the state public health law “did not allow for the issuance of orders; DHS could only ‘adopt and enforce rules and regulations.’” And these rules had to comply with limits similar to the ones the state Supreme Court imposed in Wisconsin Legislature.

But “in 1982, at the beginning of the AIDS epidemic, the Legislature amended the [public health law] to explicitly include as part of DHS’s power the ability ‘to issue orders’ of statewide application.” So the state legislature explicitly amended the law during a previous public health crisis to give the health department a broad power to issue statewide orders. The Court’s decision in Wisconsin Legislature effectively nullifies that 1982 amendment.

The Court’s decision is incompetently drafted

Having stripped the state health department of much of its authority, and having done so in the middle of the pandemic, the majority opinion then descends into confusion.

For one thing, it is not at all clear if the Court’s decision takes effect immediately, or if it does not take effect for several days.

Although the Republican-controlled state legislature, which is the plaintiff in this case, requested a six-day stay of the Court’s decision, the majority opinion does not grant such a stay. Nevertheless, Roggensack, who wrote the majority opinion, also wrote a separate concurring opinion where she states that “although our declaration of rights is effective immediately, I would stay future actions to enforce our decision until May 20, 2020.”

So it is unclear whether Roggensack voted to grant a stay or not. She authored the majority opinion, which does not grant a stay. But she also wrote a vague concurring opinion saying that she “would stay” enforcement of the Court’s decision.

Roggensack’s decision to cast Schrödinger’s vote inspired an incredulous dissent from Justice Ann Walsh Bradley. “Assuming Chief Justice Roggensack is actually voting for a stay, as her concurrence seemingly indicates, there appear to be four votes for issuing a stay (Chief Justice Roggensack and Justices Ann Walsh Bradley, Dallet, and Hagedorn),” Bradley writes. “So, is there a stay or isn’t there? It can’t be both ways.”

Similarly, after Roggensack’s majority opinion concludes that the health department must use a “rule” and not a mere “order” if it wants to hand down something like the stay-at-home order, Roggensack then tacks on several additional pages concluding that the health department’s power to issue rules also must be limited. That’s the section that concludes with a declaration that “we do not define the precise scope of DHS authority.” And it’s the section that inspired Hagedorn to write that the majority “has failed to provide almost any guidance for what the relevant laws mean, and how our state is to govern through this crisis moving forward.”

This decision is a failure of democracy

Similarly, it is likely that the reason the Court did not vote 4-3 to uphold Wisconsin’s stay-at-home order is that Justice-elect Jill Karofsky, who defeated Justice Kelly in an April election, has not yet taken her seat.

Because Kelly will continue to sit for months as a lame duck, the state health department has now been stripped of much of its power to fight a deadly virus.