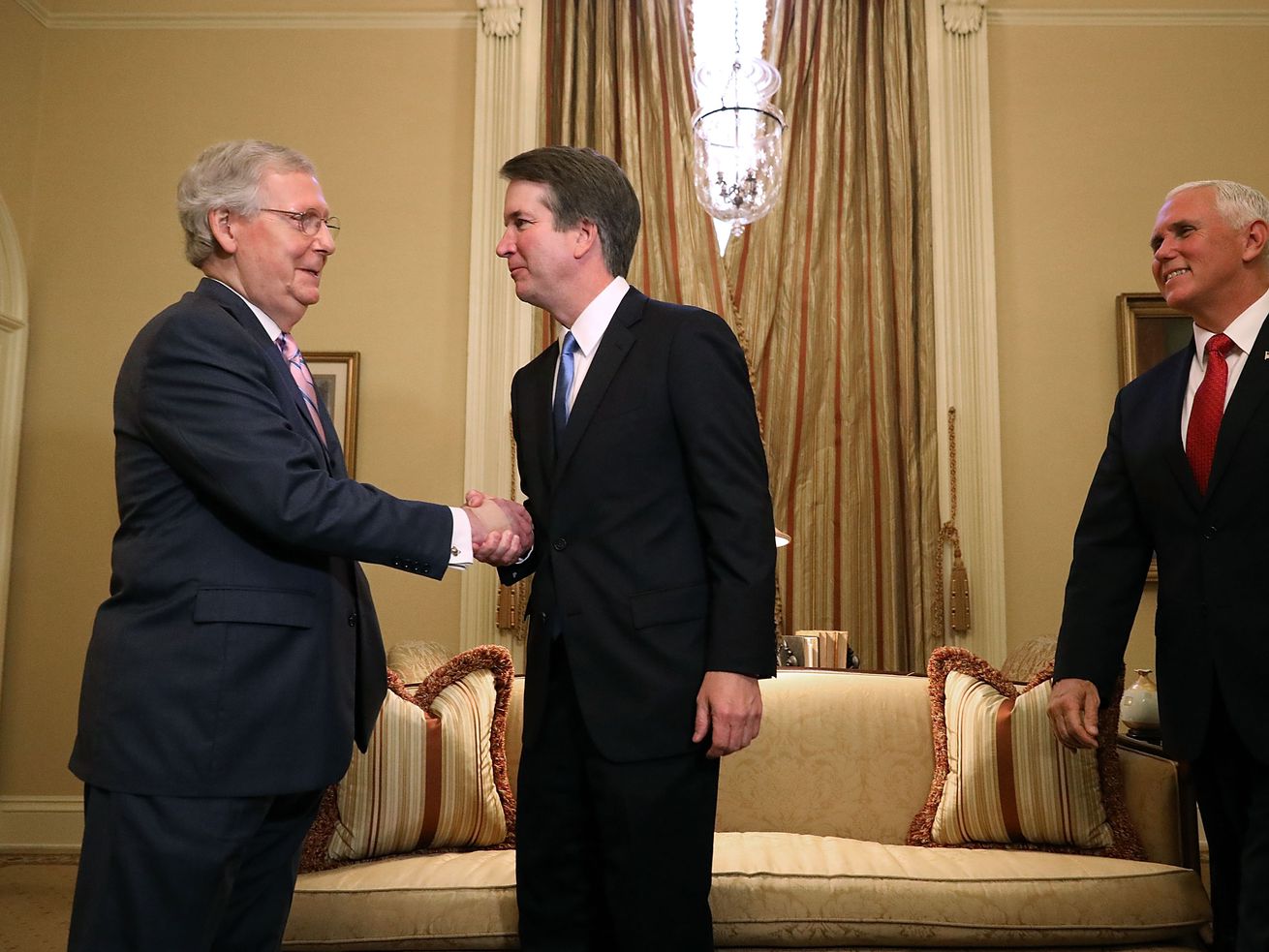 Republicans can’t risk demoralizing their voters by pulling the nomination.

Even after a second accusation of sexual misconduct against Supreme Court nominee Brett Kavanaugh, Senate Republicans show no signs of slowing his nomination.

“I am with him all the way,” President Donald Trump said on Monday. “I look forward to a vote.” Several Republican senators echoed the president’s sentiments, pushing for a vote on Kavanaugh’s nomination as soon as possible.

Christine Blasey Ford was already set to testify Thursday regarding an incident in which she alleges Kavanaugh sexually assaulted her as a teenager. Then Deborah Ramirez came forward with new allegations of sexual misconduct, first reported by the New Yorker’s Ronan Farrow and Jane Mayer. Republicans didn’t bat an eye. According to the New Yorker, unnamed Republican staffers knew about the allegations ahead of publication, even as their party sought to push forward with Kavanaugh’s confirmation.

This might seem like poor political calculus, to move forward with the confirmation of a potentially damaged individual. But Republicans aren’t being irrational. While Democrats are appalled, Republicans are listening to a different drummer: the conservative grassroots. Those voters want their Supreme Court justice confirmed, or else they are threatening to stay home on Election Day — and that really could put the Republican majority at risk.

Evangelicals are maybe the single cohort most loyal to Trump and therefore crucial in midterm elections, which will be a referendum on the president. They were already warning Republicans not to withdraw Kavanaugh or else risk electoral disaster before Ramirez came forward. They don’t sound likely to change course now.

“If Republicans were to fail to defend and confirm such an obviously and eminently qualified and decent nominee,” evangelical leader Ralph Reed told the New York Times last week, “then it will be very difficult to motivate and energize faith-based and conservative voters in November.”

Republicans are favored to hold on to their Senate majority, and possibly increase it, after this year’s elections. There are several Democrats running in states that Trump won, and a fresh Supreme Court nomination was initially thought to put red-state Democrats in a tough spot.

But now that Kavanaugh has been accused of sexual misconduct by at least two women, the conservative base sees a longtime dream of a permanent conservative majority on the nation’s highest court slipping away — and so they are pressuring Republicans to hold firm and confirm him anyway. So far, the GOP is listening.

The theory that ramming Kavanaugh through would hurt Republicans in the November elections has a certain superficial logic. Kavanaugh is a historically unpopular nominee by a very unpopular president. He’s accused of sexually assaulting a young woman and waving his penis in front of another amid a 2018 campaign defined by the electoral strength and energy of Democratic women. Young and progressive women will drive any blue wave we see this year, mobilized by their opposition to Trump and his toxic attitude toward women.

Everything about the Kavanaugh situation would seem to fuel that fire further. So why are Senate Republicans stubbornly moving ahead?

They have their own voters to worry about. Democratic enthusiasm is a given at this point, and the challenge will be for Democrats to convince less reliable voters to turn out. But Republicans are banking on their older, whiter, conservative base to show up as they usually do — and those voters want their Supreme Court justices.

“A SCOTUS nomination is always a base driver for both sides,” one Republican operative working on a closely watched campaign told me. “I think it still is — maybe even more now. My guess is the Republican base will be fired up by this. And the Democratic base certainly will be fired up. So I’m not sure the political calculation changes much.”

Kavanaugh has been the most polarizing Supreme Court nominee in recent history. Earlier this month, before Ford’s allegations became public, a full 78 percent of Republicans said he should be confirmed by the Senate, though just 38 percent of the overall public shared that view, according to a Washington Post–ABC News poll.

Last week, in an NBC-WSJ poll conducted after Ford’s story became known, 69 percent of Republicans still said they supported his nomination. As Vox’s Alvin Chang reported, GOP men saw a brief dip in support for Kavanaugh, but it quickly started to recover; GOP women didn’t change their feelings at all after Ford’s allegations.

Republican voters in general do not find Ford very credible, which gives their politicians more freedom to plow through the controversy and confirm Kavanaugh over Democratic objections.

The evangelical leaders’ pleas are, in part, an attempt to apply political pressure: Some of them are warning that religious conservatives may feel little motivation to vote in the midterm elections unless Senate Republicans move the nomination out of committee soon and do more to defend Judge Kavanaugh from what they say is a desperate Democratic ploy to prevent President Trump from filling future court vacancies.

“One of the political costs of failing to confirm Brett Kavanaugh is likely the loss of the United States Senate,” said Ralph Reed, the founder of the Faith and Freedom Coalition who is in frequent contact with the White House.

The election this year is about which base is the most motivated, and the Republican base wants Kavanaugh.

Senate Republicans already have a good chance of keeping their majority

Republicans may also be a little more willing to play hardball because they are already favorites to hold the Senate next year. Nate Silver’s FiveThirtyEight Senate forecast gives Republicans a 2-in-3 chance of holding on to the Senate. They are even money — 50 percent — to either keep the 51 seats they have now or gain at least one seat and expand their majority to 52 senators or more. It is as likely as not that Republicans will have the same amount of wiggle room — or more — in the Senate in 2019.

If you just took the Real Clear Politics polling averages as of Friday, Republicans would have a 51-48 majority, with Tennessee a dead-even toss-up.

Neither of the swing GOP votes on Kavanaugh — Sens. Susan Collins (R-ME) and Lisa Murkowski (R-AK) — are up for reelection this year, so that softens any pressure to fold as a purely political strategy. Sen. Dean Heller (R-NV), the most vulnerable GOP incumbent, is not really entertaining the idea of voting “no” after Ford’s allegations — even offering his own assessment that the scandal was merely a “hiccup.” (He did walk that back a bit later.)

Officially, Republicans are going to hear out Ford in Thursday’s hearing. Republicans seem content to let Ford speak, perhaps a recognition that the public will certainly take charges of sexual misconduct seriously in the age of #MeToo, and then get on with a vote. They also appear perfectly comfortable trying to turn the story of a Republican Supreme Court nominee allegedly sexually assaulting his high school acquaintance into a tale that is actually about Democratic malfeasance.

Many GOP senators are already signaling that if they don’t find these accusations credible, they’ll move ahead with Kavanaugh. Republicans have emphasized every inconsistency in the stories told by Ramirez and Ford, even though, as Vox’s Brian Resnick reported, their recollections are typical of traumatic memories. They’ve seized on the six people who told the New Yorker that this doesn’t sound like something Kavanaugh would have done, while ignoring at least two statements that seem to corroborate Ramirez’s account.

Republicans also seem uninterested in basic fact-finding, like letting the FBI investigate, and some senators and their aides took less than a day to conclude that Ramirez’s story could simply not be true. It’s really a smear campaign, as Sen. Lindsey Graham all but said on Monday morning.

When it comes to stopping Pres @realDonaldTrump and his agenda there seem to be no boundaries.

Whether it’s coaching witnesses or reporting thinly-sourced stories without proper verification, everything is fair game and falls into the category of – ‘The Ends Justify the Means.’

The explicit course endorsed by President Trump last week was: Let her speak, then vote — and it’s really the Democrats’ fault.

Senator Feinstein and the Democrats held the letter for months, only to release it with a bang after the hearings were OVER – done very purposefully to Obstruct & Resist & Delay. Let her testify, or not, and TAKE THE VOTE!

He-said-she-said is exactly the game Republicans want to play. Muddying the story and keeping the nomination moving is the strategy.