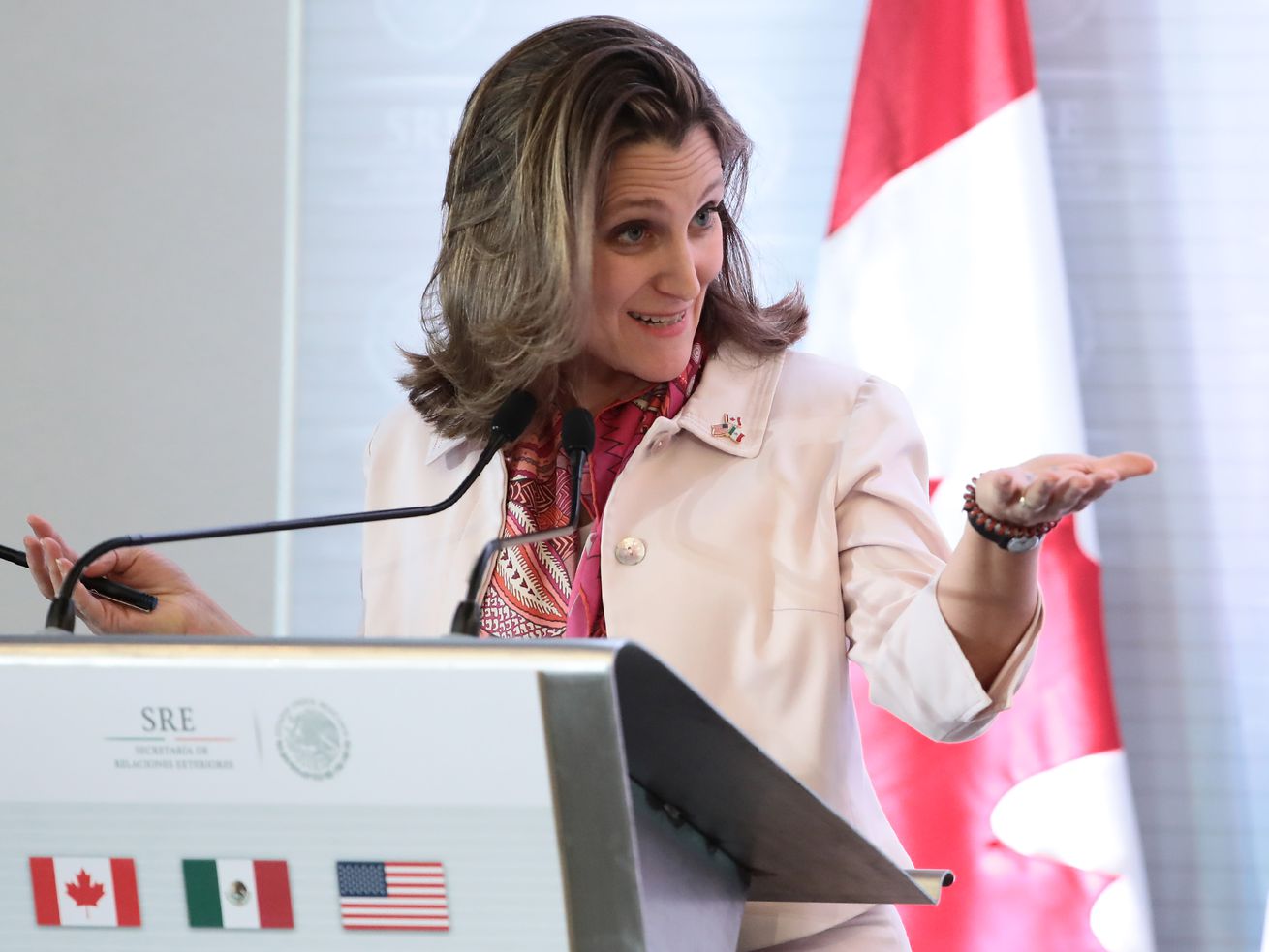 But Canada’s foreign minister has used a few colorful analogies to describe the negotiations.

Another week has passed, and there’s no new NAFTA deal in sight.

Canada and the United States are still trying to agree on what a new North American Free Trade Agreement would look like after the two countries blew past Trump’s deadline last week. Talks resumed again on Wednesday, but by the end of Friday, the two countries were still talking and had yet to reach an agreement.

Canadian Foreign Minister Chrystia Freeland and United States Trade Representative Robert Lighthizer have avoided speaking publicly about the details of the negotiations, or speculate about how long it will be until they’re over. As Freeland told reporters on Friday afternoon, “It’s not like running a race where you can see what mile you’re at.”

Freeland emerges from #NAFTA talks with no deal & won’t say if they’re close to one: “its not like running a race where you can see what mile you’re at” pic.twitter.com/Npr9UWaJkM

And on Wednesday, Freeland had compared the negotiations to childbirth. “You never knew for sure how many contractions it would take to give birth to your child, but you knew that each contraction was one closer to the end,” she told reporters. “And I think that’s where we are — we are making progress.”

The childbirth analogy is one Freeland has used before to describe NAFTA negotiations. The fact that she’s using it again seems to indicate that a deal might not be delivered soon.

But there is mounting pressure for Canada and the United States to make a deal happen by the end of September.

Last month, the US and Mexico struck a bilateral trade deal, which President Donald Trump declared could take the place of NAFTA. Trump has threatened to move ahead with the US-Mexico pact with or without Canada, though Congress — especially Republicans and their business allies — doesn’t want to leave Canada out. NAFTA is a trilateral pact between the US, Mexico, and Canada, and Congress would like to keep it that way.

And though Freeland and Lighthizer have mostly stuck to talking points (or colorful analogies), their respective bosses — Canadian Prime Minister Justin Trudeau and US President Donald Trump — have been more candid about their demands.

Trudeau has continued to insist that Canada won’t ink a deal unless it maintains NAFTA’s Chapter 19 — which stipulates that an independent panel will resolve certain trade disputes between US and Canadian companies — and provides exemptions for certain Canadian cultural industries, such as broadcasting, publishing, and music.

The Trump administration, meanwhile, wants any new deal to provide the US with increased access to the Canadian dairy market. Trump has repeatedly bashed Canada’s dairy industry. Canada uses a supply management system, which limits the amount of product the dairy industry can produce and puts quotas on imports, which the US says hurts American dairy farmers.

So for the US, it all comes down to, as economic adviser Larry Kudlow told Fox Business on Friday, “M-I-L-K.”

.@larry_kudlow on trade with Canada: “The word that continues to block the deal is m-i-l-k… Milk, dairy, drop the barriers, give our farmers a break.” pic.twitter.com/VnAJERIeeQ

Meanwhile, Trump has ratcheted up his attacks on Canada. He has threatened to impose steep tariffs on Canadian autos and on Friday suggested that such tariffs would basically destroy Canada, the US’s neighbor and close ally.

“In some countries, including Canada, a tax on cars would be the ruination of the country,” Trump told reporters.

If Trump follows through, such tariffs would likely hurt US manufacturers and consumers, too. But the president has latched onto the idea that Canada is taking advantage of the US, and his blustery threats loom over the negotiation process.

Canada knows it has a strong ally in Congress, but it’s still unclear what will happen if Canada and the US fail to reach an agreement by the end of the month. It doesn’t seem likely that Congress will move ahead with just the Mexico-US deal. And then there’s the problem of what Trump might do if Congress refuses to act — whether it’s moving ahead with his threatened tariffs, or even attempting to withdraw from NAFTA.

Regardless, the US and Canada aren’t quite there yet. There are still a few more weeks for a new, reformed NAFTA to be born.