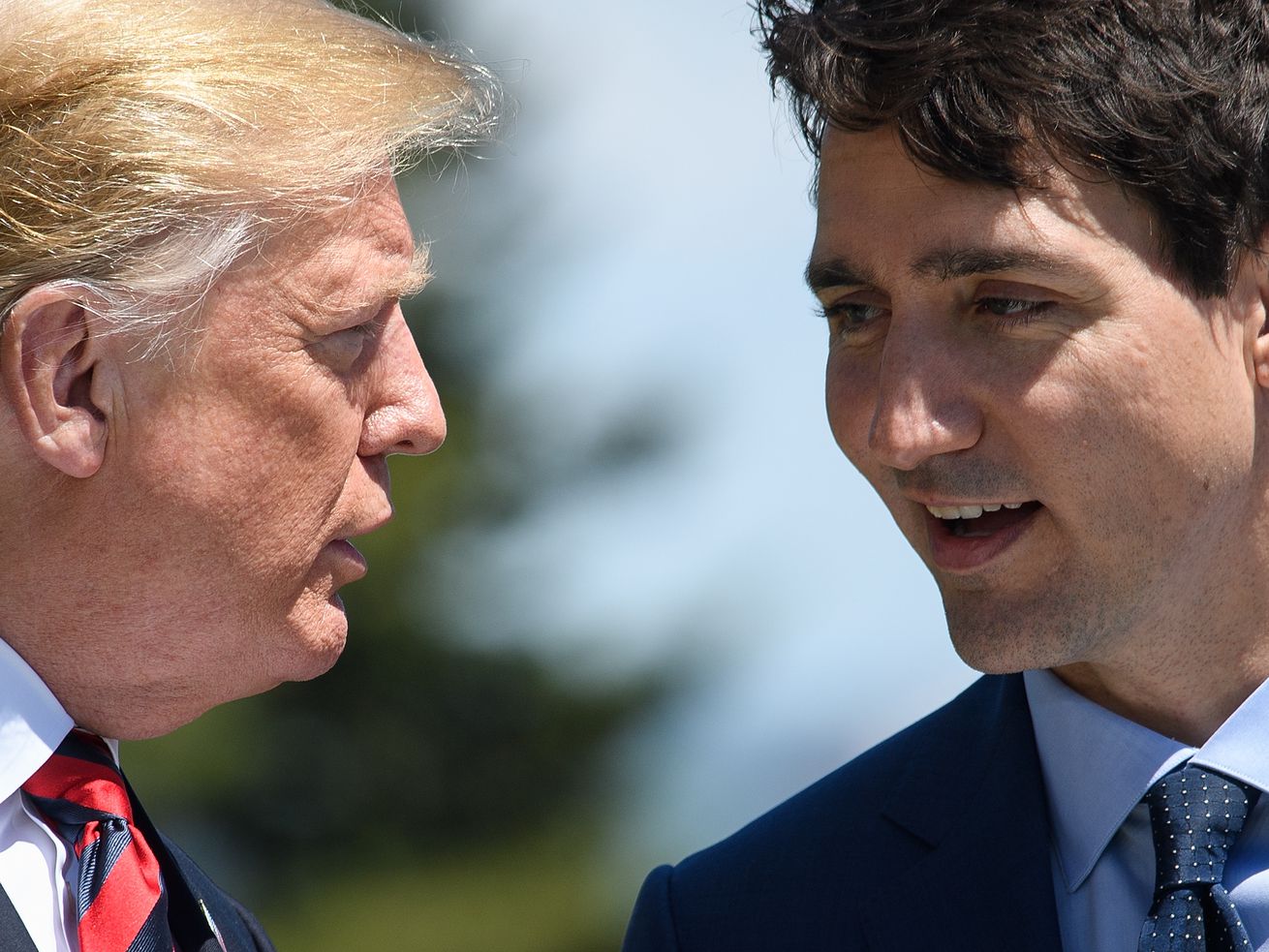 Trump announced a bilateral agreement with Mexico on Monday.

On Monday, President Donald Trump announced a new, preliminary trade agreement between the US and Mexico, which he said could replace NAFTA. The agreement was a welcome development after nearly a year of negotiations — but something was missing.

That something was Canada.

The North American Free Trade Agreement or, as Trump likes to call it, the “worst trade deal ever made,” is a trilateral agreement. Any real, substantive changes to the deal would likely have to include the US’s northern neighbor, and would need to be approved by Congress.

There have been some signs of forward movement, though. Canada resumed high-level talks with the US this week after Trump announced the US-Mexico deal, after spending about five weeks on the sidelines. And Canadian officials have struck a hopeful tone about the possibility of a new deal.

“We are encouraged by the progress that the US and Mexico made on some of their key bilateral issues,” Canadian Foreign Minister Chrystia Freeland said Wednesday. “On that basis we are optimistic about having some good productive discussions this week.”

Yet there are a few major sticking points between Canada and the US, specifically on issues of intellectual property rights, Canada’s import controls on dairy, and Chapter 19 of the original NAFTA, which dictates how the two countries resolve trade disputes related to anti-dumping and countervailing duties. Chapter 19 allows for an independent panel to review and settle these trade disputes — softwood lumber is a big one — instead of domestic courts.

The US wants to scrap Chapter 19, but Canada doesn’t, and has previously considered Chapter 19 a “red line.” But according to the Toronto Star, Canada may look to make some concessions on dairy (Trump has accused Canada’s quota system of undercutting US exports) in exchange for the US to reconsider Chapter 19 and exempt Canadian cultural industries from NAFTA.

It’s still questionable how these issues will be resolved, and when. The president is required to give lawmakers a 90-day notice of a new trade deal, and Trump has said he wants to notify Congress of a deal by this Friday.

The reason for the tight Friday deadline is political. There’s the fact that Mexican President Enrique Peña Nieto’s term is almost up, and Trump wants to finalize a deal before Peña Nieto’s leftist successor, Andrés Manuel Lopéz Obrador, takes office on December 1.

Trump might also be thinking about the November midterm elections; if control of Congress shifts to the Democrats, his plans to tinker with NAFTA might be met with more resistance.

“This is President Trump and [US Trade Representative] Robert Lighthizer holding a gun to the head to Canada, [saying,] ‘Agree to this this week or else we’ll go bilateral,’” Christopher Wilson, the deputy director of the Wilson Center’s Mexico Institute, said. “But because that is sort of an invented set of timelines, it’s not clear the gun is loaded. Canada could just as easily call the United States’ bluff as it could use this as an opportunity to wrap things up.”

It’s also not quite clear what will happen if there’s no agreement that includes Canada by Trump’s Friday deadline — and Trump is the source of a lot of that uncertainty.

He could make a drastic move and attempt to withdraw from NAFTA or keep moving forward with the bilateral agreement with Mexico. The supply chains for NAFTA countries (and the automotive industry, in particular) are deeply intertwined. Breaking up NAFTA, or kicking out Canada, would be “massively disruptive,” Edward Alden, a senior fellow at the Council on Foreign Relations, told me.

“I think the big Canada bet is that this is a bluff,” Alden said. The country is hoping that the Trump administration “doesn’t have the legal authority, and doesn’t want to pay the economic consequences of trying to keep Canada out.”

Trump may want to move ahead without Canada — but hurdles remain

Trump may hate NAFTA, and his administration may want to renegotiate the treaty, but whether those reforms go into effect is also largely dependent on Congress, which has final approval over trade deals.

And Trump’s Republicans allies, who largely support NAFTA, don’t seem too keen to move ahead without Canada in the mix.

“Any new agreement that excludes Canada would unfortunately be a significant step in the wrong direction compared to the trilateral agreement in place today,” Sen. Jerry Moran (R-KS) said in a statement Tuesday. Other GOP lawmakers strongly echoed that sentiment.

It’s also unclear if Trump can legally push just a US-Mexico agreement through Congress. Trade promotion authority, or TPA, gives the president the power to negotiate trade agreements, which must be approved by Congress. Trump notified Congress that he would be tweaking NAFTA — not striking a brand new agreement with just Mexico.

Bill Reinsch, a senior adviser at the Center for Strategic and International Studies, told Politico that unless Canada is included, Trump might not meet the TPA requirements.

What that means, practically, is that Congress might not be able to fast-track a bilateral deal with a straight up-or-down vote and could potentially need 60 votes in the Senate, which would require Democratic support.

And a deal without Canada has certainly freaked out pro-business Republican leaders over fears of economic disruption.

“The worst outcome is that the whole thing falls apart — and that’s sort of Trump’s threat,” Alden said. “That would be enormously destructive, both diplomatically and economically.”

That’s not to say that Canada and the US can’t reach a deal — and both Canada and the US have seemed to warm up to the possibility. “I think Canada very much wants to make the deal,” Trump told reporters Wednesday.

And if a deal, or even the contours of a deal, is reached by the end of the week, that might mean a reformed — if not exactly transformed — NAFTA, Alden added.

“This is a serious negotiation, and if [the Trump administration] can pull it off, it gives a bit of optimism that deals are possible with China and others,” he said. “If it crashes and burns, I think we’re looking at pretty dark days ahead.”