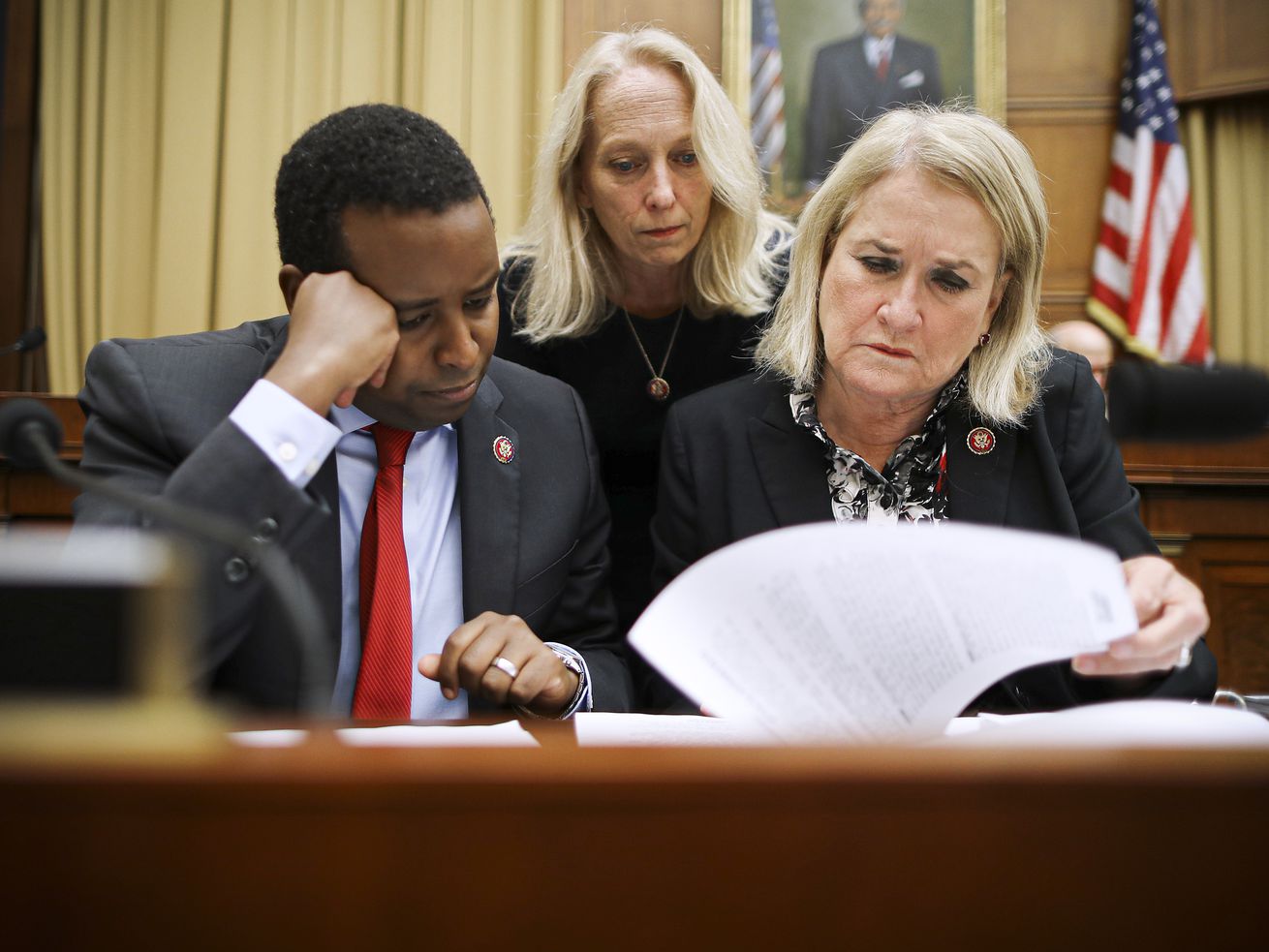 This really looks like evidence of a damning quid pro quo.

Wednesday morning the White House released an edited summary of President Donald Trump’s call with Ukraine’s President Volodymyr Zelensky on July 25, the call that appears to have inspired the now-famous whistleblower complaint against Trump. The document, which reads like a transcript, was widely expected to cast the president’s behavior in a more flattering light.

It did not. If anything, it’s more evidence for the worst-case scenario: That President Trump was conditioning military aid to Ukraine on the country’s willingness to investigate his domestic political enemies.

In the summary, Zelensky asks Trump for an increase in military aid — specifically, to purchase more Javelin anti-tank missiles, useful in Ukraine’s ongoing conflict with Russian-backed separatists in its east.

Trump responds by saying, “I would like you to do us a favor though.”

The favor turns out to be about two investigations Trump would like Ukraine to conduct: one about a bizarre and unfounded theory about Ukrainian possession of a Democratic email server, the other about the Biden family’s allegedly corrupt dealings with a Ukrainian prosecutor.

That’s not the entirety of what’s bad for Trump in the transcript — there’s concerning stuff about Attorney General William Barr as well. But the top-line takeaway is that the White House’s summary is anything but exculpatory.

If Democrats were looking for more fuel for their impeachment fire, they appear to have found it.

The biggest takeaway from the summary: it sure looks like a quid pro quo

It’s important to note, at the outset, that this call summary is not quite a verbatim transcript of what Trump and Zelensky said. It’s written like a transcript, with direct quotations assigned to each leader, but it is not an authoritative transcription of an audio recording — as a note on the first page makes clear.

“The text in this document records the notes and recollections of Situation Room Duty Officers and NSC policy staff assigned to listen and memorialize the conversation in written form as the conversation takes place,” it explains. “A number of factors can affect the accuracy of the record, including poor telecommunications connections and variations in accent and/or interpretation.”

So there are likely some errors and omissions, and there is at least one pretty notable unclarity in the document I’ll point out later on. But it’s worth treating the parts that are written down as, for now, roughly accurate quotations of both Trump and Zelensky.

The context for the call is important too. According to a Washington Post report, a week before phoning Zelensky, who had just assumed office, Trump ordered chief of staff Mick Mulvaney to suspend $400 million worth of US military aid to Ukraine (the aid was unlocked in September). So you have a new leader of a country locked in conflict with much more powerful Russia speaking to one of its principal international benefactors, which has recently suspended military aid.

After a few pleasantries early in the call, Trump brings up this military aid unprompted. He goes out of his way to compare US assistance to EU aid to Ukraine. “I will say that we do a lot for Ukraine. We spend a lot of effort and a lot of time,” he tells Zelensky. “Much more than the European countries are doing and they should be helping you more than they are.”

Zelensky agrees, telling Trump “the United States is a much bigger partner than the European Union and I’m very grateful to you for that.” This is true, at least when it comes to military aid — which means Trump really does have leverage here.

The Ukrainian leader then makes a request for the US to increase its military assistance, specifically by selling his country more Javelin anti-tank missiles. This is the pivot point in the summary, so I’m going to quote it in context:

ZELENSKY: I would also like to thank you for your great support in the area of defense. We. are ready to continue to cooperate for the next steps. Specifically, we are almost. ready to buy more Javelins from the United· States for defense purposes.

TRUMP: I would like you to do us a favor though because our country has been through a lot and Ukraine knows a lot about it. I would like you to find out what happened with this whole situation with Ukraine, they say Crowdstrike … I guess you have one of your weal thy people. … The server, they say Ukraine has it.

The word “though” in Trump’s line makes it clear what’s going on here, explicitly connecting the request for aid to Trump’s request for “a favor” after Trump initiated a conversation about how important US aid is for Ukraine. And that favor is investigating “the server.”

Now, you might be tempted to think that Trump is asking about Hillary Clinton’s email server. But Trump references CrowdStrike, a California-based cybersecurity firm, which suggests he’s talking about something different. CrowdStrike was the company that linked Russia to the hack of the Democratic National Committee back in 2016. Trump seems to be floating a conspiracy theory, promulgated by his attorney Rudy Giuliani, that it was actually Ukraine that hacked the Democrats — and then tried to frame Trump and Russia for it.

This contravenes every piece of evidence we have on the DNC hack, including the unanimous assessment of US intelligence agencies that Russia was responsible for it and an indictment from Mueller’s team spelling out exactly how it happened. Trump also seems fundamentally confused about how hacking works: the hackers got access to DNC emails, but did not take the server itself.

But Trump seems to be asking Zelensky to investigate the DNC emails anyway, presumably because it would make him look good politically and allow him to suggest the Democrats were part of a conspiracy that’s out to get him.

That’s not the full extent of Trump’s “favor.” He also asks Zelensky to look into Hunter Biden’s business dealings with a Ukrainian company, as well as totally unsubstantiated allegations that Joe Biden was corruptly working to shield his son from prosecution:

The situation stems from Hunter Biden’s work with Burisma Holdings, a company owned by a controversial and possibly corrupt Ukrainian oligarch. The allegation is that Joe Biden attempted to get the Ukrainian prosecutor general fired in order to protect Burisma and his son from investigation. There is, however, no reason to believe this. Joe Biden did attempt to get the prosecutor general fired, but that was the result of the prosecutor’s own involvement in corruption; there is no evidence he was investigating Burisma at the time. Hunter Biden’s dealings with Burisma were arguably unethical, but there is no reason to believe that they were illegal or that his father did anything wrong.

We already knew that Trump had requested Zelensky to investigate this phantom Biden conspiracy. But in context of the transcript, his use of the phrase “the other thing” makes it part of the same “favor” as investigating the server hack. It’s all part of the same request, the one that Trump has seemed to link to US military assistance to Ukraine — which he had conveniently suspended just one week prior to the call.

Taken in context, what we have here most clearly reads as a quid pro quo, with Trump offering policy favors if Zelensky helps him politically.

Leading up to the readout’s release, the situation looked bad for Trump, with the president openly admitting prior to its publication that he tried to get a foreign leader to investigate one of his leading political opponents, potentially compromising the integrity of the 2020 election. Now it seems like he wasn’t just requesting Zelensky investigate Biden; it looks like he was unsubtly trying to strong-arm him into doing it by leveraging US military assistance.

While the evidence of the quid pro quo is the main takeaway from the call summary, it’s hardly the only troubling part of the document.

Near the end, when discussing the situation involving Biden and a Ukrainian prosecutor, Trump tells Zelensky to expect calls both from Rudy Giuliani, his personal lawyer, and US Attorney General William Barr:

I will have Mr. Giuliani give you a call and I am also going to have Attorney General Barr call and we will get to· the bottom of it. I’m sure you will figure it out. I heard the prosecutor was treated very badly and he was a very fair prosecutor so good luck with everything.

The Giuliani part is corrupt but no surprise: We’ve known that Giuliani was running a kind of shadow Ukraine policy aimed at securing Ukrainian assistance in Trump’s reelection bid. The really eye-popping element here is the reference to Attorney General Barr.

The attorney general is supposed to be the chief law enforcement officer of the United States, accountable to the president but not his personal lawyer. They are at once a member of the administration and a check on it.

Barr has proven himself to have difficulty with this dual role — most notably, when he repeatedly attempted to spin the Mueller report’s findings in the president’s favor before its release, misleading the American public about its findings. This phone call suggests that Barr may also be involved in Trump’s scheme for abusing his powers of office for political gain. If so, that would be a major new scandal in its own right.

The call’s references to Barr are relatively brief; we don’t actually know the extent of his involvement in this situation. But there are already calls for Barr to recuse himself from any involvement in investigating Trump’s conduct, and Democrats are all but certain to investigate the full extent of Barr’s role in all of this.

This isn’t the only tantalizingly unclear point in the White House summary. Remember, this is an edited account and not a verbatim transcription — which means it’s possible the White House omitted some passages that are even more devastating to the president.

For example, look at one of the crucial lines from the section about Biden: “Biden went around bragging that he stopped the prosecution so if you can look into it … It sounds horrible to me.” Those ellipses are the White House’s, not mine. It’s possible they denote a pause; it’s equally possible they denote that Trump said something in between those two sentences that the White House would rather not reveal.

The point, then, is that we’re only at the beginning stages of understanding what was happening here. If the evidence is already this bad, it’s possible it could get worse. With Democrats pursuing an impeachment inquiry over Ukraine that spans six different House committees, each with subpoena power, more facts could well come out.

But the biggest takeaway here is that in some ways, we don’t really need more facts. We already know that the president’s behavior, in this case, is deeply inappropriate and corrupt.

We know that the president asked for investigations into his political opponents and politically helpful conspiracy theories, essentially calling for a foreign power to interfere with the conduct of the 2020 election. We know that there he at least strongly implied that he would be conditioning an important policy decision on Ukraine’s compliance here, suggesting that he’s willing to abuse his powers of office for political advantage.

I’ve said it before, and I’ll say it again: If this isn’t impeachable, I don’t know what is.

Looking for a quick way to keep up with the never-ending news cycle? Host Sean Rameswaram will guide you through the most important stories at the end of each day.

Subscribe on Apple Podcasts, Spotify, Overcast, or wherever you listen to podcasts.