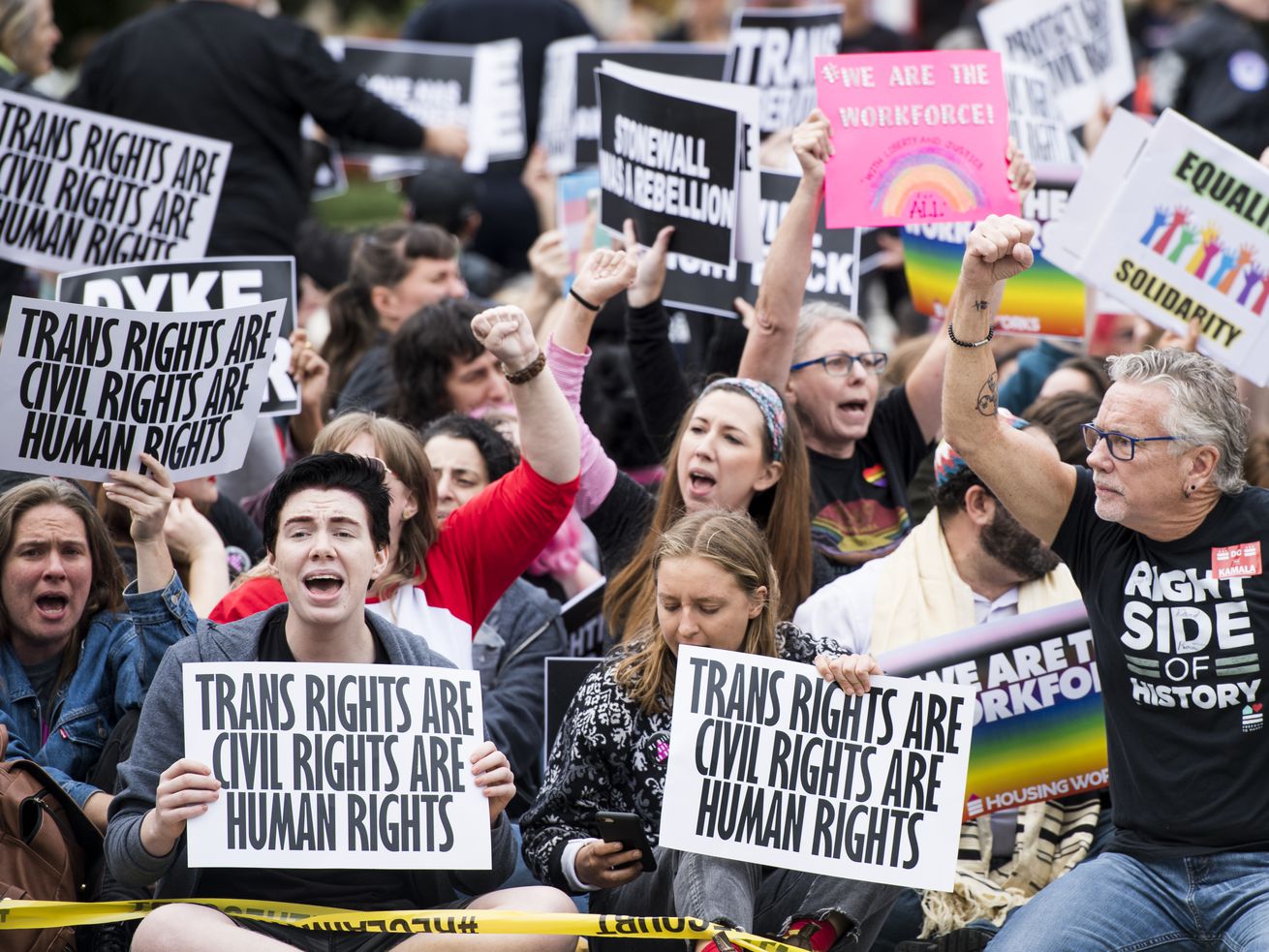 Protesters block the street in front of the Supreme Court as it hears arguments on whether gay and transgender people are covered by a federal law barring employment discrimination on the basis of sex in 2019. | Bill Clark/CQ-Roll Call, Inc/Getty Images

The new rule was released on the anniversary of the shooting at Pulse nightclub in Orlando.

The Trump administration has finalized a Department of Health and Human Services administrative rule rolling back health care discrimination protections for LGBTQ people, according to an HHS press release. The rule was released Friday, June 12, the fourth anniversary of the Pulse shooting, which left 49 victims, including many queer and trans people, dead in an Orlando, Florida, nightclub.

First proposed in May 2019, the rule reverses an Obama-era interpretation that sex discrimination under Section 1557 of the Affordable Care Act applied to discrimination against queer and trans people, as well as people who are seeking or have had an abortion.

“HHS will enforce Section 1557 by returning to the government’s interpretation of sex discrimination according to the plain meaning of the word ‘sex’ as male or female and as determined by biology,” reads the agency’s press release.

Trans people especially face overwhelming levels of discrimination from health care providers. According to a 2010 study, almost one in five trans people said they had been denied care by a medical provider because of their gender identity, and 28 percent were subjected to harassment in a medical setting. It was that reality the Obama administration attempted to address by including LGBTQ people under the definition of sex discrimination, conforming to an increasing wave of state and federal court rulings.

The Obama-era rule made it illegal for doctors, hospitals, and other health care workers to deny care to someone whose sexual orientation or gender identity they disapproved of. The new Trump administration rule allows health care providers to deny care to anyone they perceive as trans or gay. It will allow hospitals to house trans women and men according to their birth-assigned sex, or condition emergency treatment on the stoppage of cross-sex hormones. It would also allow insurance companies to reinstate blanket bans on transition-related care like gender-affirming surgery or hormone replacement therapy.

The Human Rights Campaign has already announced its plan to sue the Trump administration over the rule. Meanwhile, National Women’s Law Center President and CEO Fatima Goss Graves said the organization has teamed up with the Transgender Law Center, the Harvard Center for Health Law and Policy Innovation, and the Transgender Legal Defense and Education Fund to challenge the rule as well.

“This sanctioning of discrimination in health care is unlawful and immoral, and doing so while our country loses thousands of lives daily and health inequities across the board persist is especially egregious,” said Graves in a statement Friday. “No one should fear being turned away by a medical provider because of who they are or the personal health decisions they have made.”

In the age of Covid-19, the rule could also mean the life of a sick trans person is quite literally at the whim of a doctor’s personal beliefs about trans people. That fear was already permeating the trans community before news of the finalized rule was released. “I’m scared to say this out loud, but I’m afraid that trans people will face things like being deprioritized for ventilators or for care,” Bre Kidman, a nonbinary candidate for US Senate in Maine, told Vox in April.

Gillian Branstetter, a spokesperson for the National Women’s Law Center, criticized the administration’s timing for moving forward with the rule in the middle of a pandemic. “It’s egregious that we are losing 3,000 Americans a day to an unprecedented public health emergency and a top priority of the Trump administration is making sure doctors can turn away trans people,” she told Vox in April. “We already know that trans people face a patchwork of health inequities that leaves them at risk for any number of health concerns. This rule threatened the well-being of trans people before this pandemic. During this pandemic, it is beyond immoral to worsen any group’s access to health care.”

The fight over the rule began in December 2016 with a nationwide injunction on the Obama interpretation. It was issued by conservative favorite, federal Judge Reed O’Connor, who has issued numerous rulings overturning Obama-era rules regarding the Affordable Care Act, abortion access, and access to birth control. That ruling was finalized in October 2019 by O’Connor.

It’s that ruling, an HHS spokesperson told Politico back in April, with which the department is complying. HHS head of civil rights Roger Severino defended that agency’s treatment of marginalized communities to Politico. “As we have shown in our recent efforts to protect persons from disability and age discrimination during the pandemic, HHS will vigorously enforce civil rights laws as passed by Congress, before, during, and after any rulemaking,” he said in a statement.

Before his stint as HHS civil rights chief, Severino was a fierce critic of the Obama administration’s efforts to protect LGBTQ people from discrimination. Proponents of the new rule have pushed the false notion that doctors were being forced to perform gender-affirming surgeries that they were uncomfortable with. In reality, transgender surgical care is highly specialized, and trans people are unlikely to go to a doctor who isn’t experienced in the procedure.

With the new rule, the US trans community is now looking at a possible return to a health care environment that allowed oncologists to deny cancer care to Robert Eads, a trans man who developed ovarian cancer and was never notified of his diagnosis. When he finally learned of it, his doctor said his first instinct was to send Eads to a psychologist rather than treating his cancer. Eads died in 1999. Or Tyra Hunter, who died in 1995 after an EMT discovered her trans status following a car accident and refused to touch her on the trip to the hospital, mere miles from the White House.

Aside from the new rule, the LGBTQ community also awaits two Supreme Court decisions on whether queer and trans people are protected under sex discrimination provisions of federal civil rights law.

“Trans people are terrified of the [Supreme Court] case,” Branstetter said. “Behind a lot of that fear is the understanding that the Trump administration has been hard at work instilling long-term damage to LGBTQ rights. It’s not just the Trump administration, it’s an entire sphere of right-wing organizations who have made their primary goal the erasure of trans people from public life.”

Conservatives haven’t let the pandemic slow down their political agenda

In many ways, the coronavirus pandemic has provided convenient cover for conservatives to enact several political priorities while the nation’s attention is on the virus and gatherings are strongly discouraged.

At the state level, Idaho enacted two anti-trans laws in late March, while South Carolina held a hearing on a bill that would ban transition care for trans minors while the state was under a shelter-at-home order. Additionally, Trump’s DOJ filed a statement of interest in a federal lawsuit seeking to ban trans girls from high school girls’ sports in Connecticut.

The anti-trans moves join multiple state-level attacks on abortion access during the pandemic, with some conservative states moving to ban or restrict the procedure under bans on “nonessential surgeries.” Texas eventually eased its ban on nonessential surgeries, while three states saw most of the attempted bans stopped in federal court. According to the Kaiser Family Foundation, only Arkansas’s partial ban remained in place as of May 19.

Flying a bit further under the radar have also been several attempts to use the pandemic to justify loosening environmental and business regulations, long a goal of the Trump administration.

On March 26, the Environmental Protection Agency issued a directive saying it would “not expect to seek penalties for violations of routine compliance monitoring, integrity testing, sampling, laboratory analysis, training, and reporting or certification obligations in situations where the EPA agrees that Covid-19 was the cause of the noncompliance.” The move allows air polluters to flout federal law without fear of penalty, right when clean air is perhaps most important for the health and safety of everyday Americans.

Then, in early April, the administration finalized its rollback of Obama-era requirements for vehicle fuel efficiency.

Several conservative groups, including the Heritage Foundation, also released plans for the administration to pursue deregulation of business and environmental rules. Among the Heritage plans the White House found intriguing was a call for the president to ask agencies not to enforce small business regulations altogether.

“A presidential call for a wide-scale policy of non-enforcement would send a very strong signal to businesses that the government is not going to come down hard on them as they try to get back up and running,” the Heritage plan said.

Left-leaning policy experts disagree. “This sounds exactly like the type of opportunistic political move that absolutely should not be attempted right now,” Jared Bernstein, a former adviser to presumptive Democratic presidential nominee Joe Biden, told the Washington Post in April. “Correlations between regulations and economic activity are far shakier than they assume, and I don’t believe this idea will help at all.”

It’s been clear since the pandemic started that there is no bad time for the Trump administration to push their political agenda, even if that means costing Americans — LGBTQ or not — their lives.