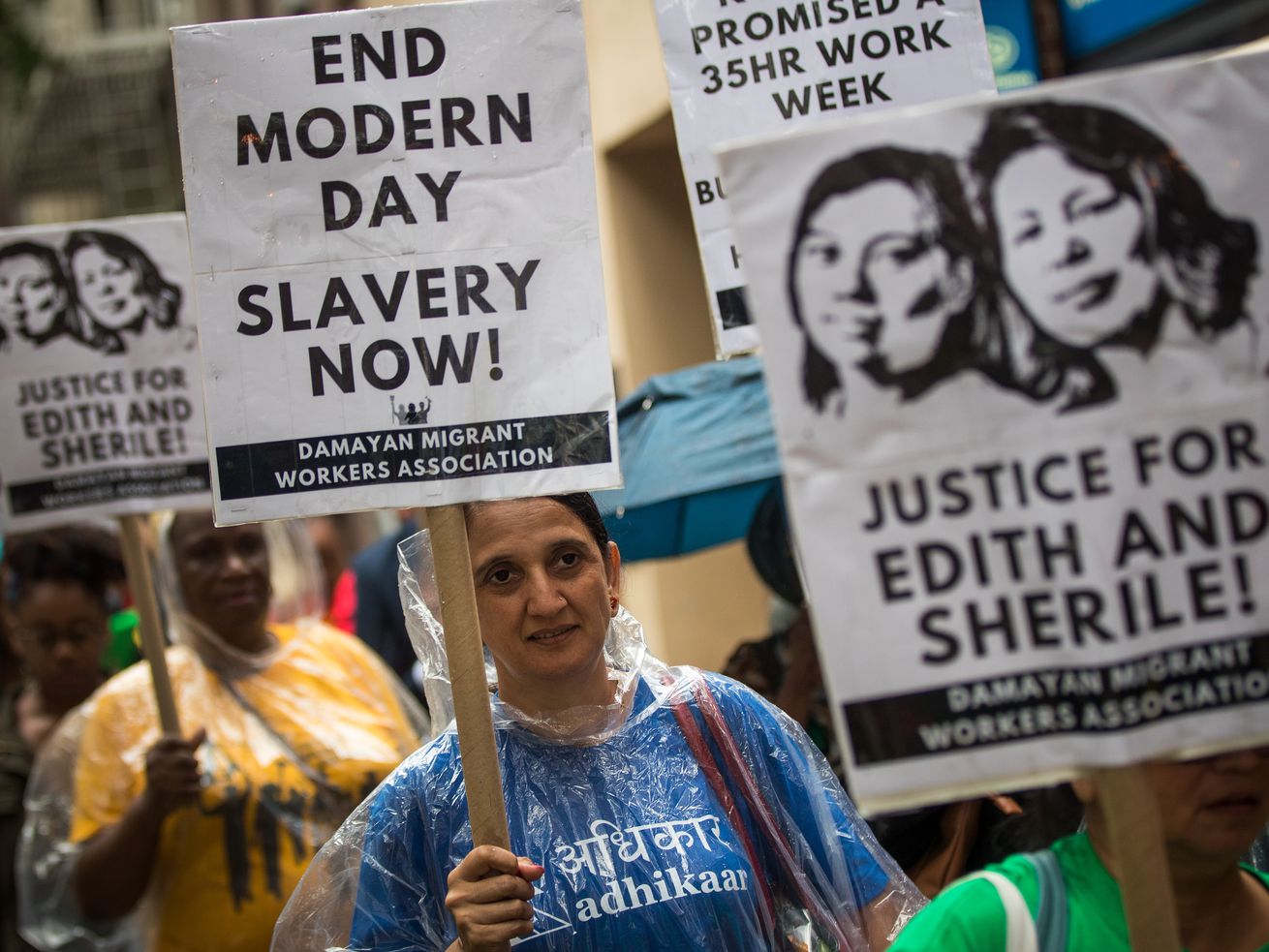 They give an “unfair advantage” to US competitors, according to the US Labor Department.

The Trump administration says that modern-day slavery and child labor are terrible. Not necessarily because millions of people across the globe are forced to work in abusive conditions, but mostly because the practice makes US businesses less competitive and costs Americans jobs.

In the US Department of Labor’s 2018 report on modern-day slavery and child labor, released Thursday, Labor Secretary Alexander Acosta framed the practice as an economic issue, rather than the urgent human rights problem global leaders have long considered it.

Modern-day slavery, also known as forced labor, involves people who are coerced into working under the threat of violence or intimidation, according to the United Nations.

It also includes scenarios in which employers withhold a worker’s passport, threaten to call immigration authorities, or manipulate a worker’s debt so they can’t leave. The UN states that nearly every country in the world has agreed that “not being subject to forced labour is a fundamental human right.”

So has the United States. But to the Trump administration, forcing people to work for little or no money is also an “unfair advantage” for foreign businesses.

“American workers cannot compete with producers abroad who use child labor or forced labor, provide unsafe working conditions, or do not pay workers what they are legally owed,” Acosta wrote in the report. “These reprehensible practices undercut the higher standards we maintain to protect the well-being of our workforce here at home.”

Annick Febrey, director of government relations with the Human Trafficking Institute, a nonprofit organization that works to abolish modern slavery, told Reuters that this kind of language is “reflective of the current administration’s trade policies and focus on America First.”

In the Trump administration, “America First” means focusing first and foremost on promoting US economic interests — and relegating human rights concerns to a distant second (at best).

To be fair, Acosta did condemn the practice of forced labor, and committed to defend “the rights of all people to live free of child labor, forced labor, human trafficking, and modern slavery” in the report.

But the message still represents a shift from recent US administrations, which have always framed the fight to eradicate global slavery and child labor as a moral duty, unrelated to its impact on the US economy.

In 2015, then-Labor Secretary Tom Perez framed the issue as a part of a united push for “conscious capitalism.”

“We must lift vulnerable populations out of poverty and social exclusion, helping them gain access to education and training, stable livelihoods, and decent work,” Perez wrote in the 2015 report.

He didn’t mention anything about the need to create a “fair playing field” for American workers.

Progress in eliminating forced labor has been slow

The United States was among the 193 countries that adopted the UN’s Sustainable Development Goals in 2015, which set targets to end global poverty; protect the environment; and “promote peaceful, inclusive, and just societies” by 2030. Unsurprisingly, that included a promise by each country to do more to eradicate modern-day slavery and child labor.

As part of the effort, Congress and President Barack Obama passed the Trade Facilitation and Trade Enforcement Act of 2016, which eliminated a loophole that had allowed US businesses to import products made by children or forced laborers if they couldn’t find enough of the needed product within the United States.

The Labor Department’s 2015 report on forced labor noted that about 168 million children and 21 million adults across the world were working against their will.

The Trump administration’s latest report shows that progress in ending forced labor has been slow, and in some cases, it’s reversing. In 2017, there were 16 million fewer children working across the world. But there were 4 million more adults who were working as modern-day slaves.

The report doesn’t explain why this is happening, but experts say the numbers often fluctuate because it’s hard to get accurate data. Forced labor is underreported and well hidden from public view. So it’s likely an even bigger problem than the official numbers suggest.

The Trump administration’s labor report does acknowledge the “need to accelerate progress” on reducing forced labor and calls for “intensifying efforts” with respect to enforcement.

It also points to a few ways the administration is attempting to do so, highlighting that the Labor Department investigated 750 cases with child labor violations in 2017, and “debarred employers from applying for certification to request temporary foreign workers due to frequent abuse of workers in the H-2A agricultural worker visa program.”

In the end, though, the entire struggle is still framed in the context of protecting US economic interests.

“[T]he U.S. will do what it takes to protect vulnerable workers from exploitation, safeguard American jobs, and create a fair playing field for countries that play by the rules,” Acosta writes.

Editor’s note: This piece has been updated to include additional language from the Trump administration’s labor report highlighting the importance of ending child labor and protecting vulnerable workers and pointing to steps the administration has taken in these areas.