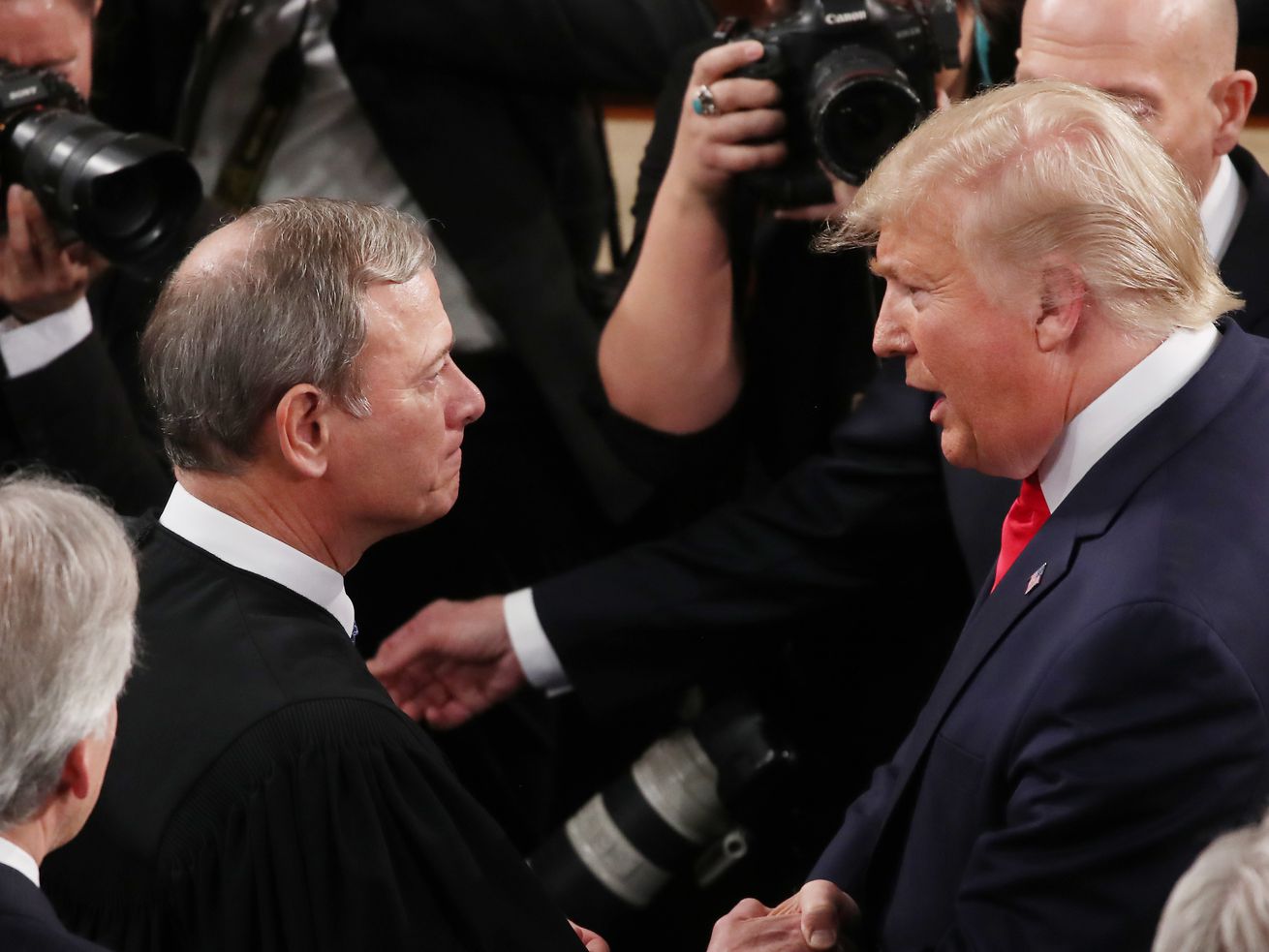 President Donald Trump speaks to Chief Justice John Roberts during the State of the Union address in the House chamber on February 4 in Washington, DC.  | Mark Wilson/Getty Images

Chief Justice Roberts’s opinion can be read two ways. One of them could be catastrophic.

There are two ways to read the Supreme Court’s decision in Seila Law v. CFPB, which was handed down on Monday.

But before we get to that, here are the basics of the case: The plaintiffs in this case asked the Court to invalidate the entire Consumer Financial Protection Bureau (CFPB), a federal agency, proposed in 2007 by then-professor Elizabeth Warren, to prevent predatory practices by many lenders. But the radical claim that the whole agency should fall gained little traction on the Supreme Court. Instead, the justices largely focused on the question of whether the president may remove the CFPB’s sitting director at will.

A majority of the Court agreed that a president may remove the CFPB director. In the short term, that decision could benefit presumptive Democratic presidential nominee Joe Biden, who will be able to remove Trump’s CFPB director right away if Biden becomes president. In the long term, however, the decision could potentially empower the president to manipulate the political process.

The first way to read Seila Law is as a minor decision holding that the unusual structure Congress envisioned for the Consumer Financial Protection Bureau is unconstitutional. The CFPB is one of just a few federal agencies that is headed by a single director who cannot be removed at will by the president of the United States. Seila Law holds that this abnormal way of structuring a federal agency’s leadership is unconstitutional.

The other way to read the decision, however, is that it could be the first salvo in an attack on other agencies that enjoy some degree of insulation from the president. These “independent” agencies include bodies like the Federal Reserve and the Federal Communications Commission (FCC), and there are vital reasons why these agencies’ leadership should remain independent of the president.

Lawyers who prefer the first, more narrow reading of Seila Law can find plenty of language in Chief Justice John Roberts’s majority opinion that supports such a reading. Meanwhile, lawyers eager to turn the Fed into a subsidiary of the White House can find language supporting that outcome as well.

So the immediate upshot of Seila Law is that the CFPB survives this attempt to strike it down in its entirety, and Democrats gain the power to remove Trump’s CFPB director if Biden is sworn in next year. But it is unlikely that we will know the full significance of Seila Law until the Court hears a new case testing its meaning.

Seila Law involves a lengthy crusade by many conservative lawyers to expand the president’s power to fire top government officials.

Conservatives have fought a long fight against such limitations on executive authority. In 1988, dissenting in Morrison v. Olson, Justice Antonin Scalia suggested that insulating independent agency heads from presidential control in this way is unconstitutional.

This theory, that all executive branch officials must be responsible to the president, is known as the theory of the “unitary executive.”

Morrison was a 7-1 decision — Scalia dissented only for himself — but Scalia’s lonely dissent gained a cult following within the conservative legal community. Justice Brett Kavanaugh said in 2016 that he wanted to “put the final nail” in the Morrison majority opinion’s coffin.

Notably, the Court’s decision in Seila Law does not go quite that far. But it does suggest that there may be significant new limits on Congress’s power to create independent agencies.

Most independent agencies — including the Fed and the FCC — are led by a multi-member board.

The CFPB is unusual, though not entirely unique, in that it is led by a single director who could not be removed at will by the president. This unusual leadership structure, according to Roberts’s majority opinion, is not allowed. According to Roberts, the Constitution “scrupulously avoids concentrating power in the hands of any single individual.”

The one exception to this rule is the president. But Roberts says that the president is unlike all other government officials (except for the vice president) in that they are “elected by the entire Nation.” Thus, as the one person chosen to lead by the whole country, the presidency provides “a single object for the jealousy and watchfulness of the people.” If a president behaves badly, that behavior is uniquely likely to be noticed by the voters.

But this structure is undermined if another singular official — in this case, the head of the CFPB — may wield executive power on their own. Indeed, Roberts claims, because the CFPB director’s term lasts for five years, longer than a presidential term, “an unlucky President might get elected on a consumer-protection platform and enter office only to find herself saddled with a holdover Director from a competing political party who is dead set against that agenda.”

The CFPB’s unusual leadership structure, in other words, potentially undermines democracy by creating a competing power center within the government that is not accountable to the elected president.

Fair enough. But, as mentioned above, there are very good reasons why we do not want some agencies to be fully subject to presidential authority. If the president can threaten to fire Fed governors or FCC commissioners, those agencies might try to influence the result of an election in illegitimate ways.

And while much of Roberts’s decision focused on the CFPB’s single-director structure, it is far from clear, after Seila Law, whether multi-member agencies like the FCC or the Fed may remain independent.

The uncertain future of Humphrey’s Executor

The concept of an independent agency was upheld by Humphrey’s Executor v. United States (1935), which allowed Congress to create multi-member agencies with some degree of insulation from the president. But Roberts’s opinion in Seila Law reads Humphrey’s Executor narrowly.

According to Roberts, “the contours of the Humphrey’s Executor exception depend upon the characteristics of the agency before the Court” — and whether the agency can best be described as an adjunct of the executive branch, the legislature, or the judiciary. Humphrey’s Executor permitted the agency at issue in that case, the Federal Trade Commission, to operate independently from the president because the FTC “acted ‘as a legislative agency’ in ‘making investigations and reports’ to Congress and ‘as an agency of the judiciary’ in making recommendations to courts as a master in chancery.”

This is all very technical language that only the kind of person who nerds out on separation of powers debates could love, but here’s the point: Roberts’s majority opinion suggests that the CFPB is different from the FTC in that it is “hardly a mere legislative or judicial aid.”

Instead of making reports and recommendations to Congress, as the 1935 FTC did, the Director possesses the authority to promulgate binding rules fleshing out 19 federal statutes, including a broad prohibition on unfair and deceptive practices in a major segment of the U. S. economy. And instead of submitting recommended dispositions to an Article III court, the Director may unilaterally issue final decisions awarding legal and equitable relief in administrative adjudications.

The CFPB, in other words, wields significant power on its own. It does not merely make “reports and recommendations” to other branches of government.

But similar things could be said about the Federal Reserve, which wields massive economic power that can plunge millions of Americans into unemployment or rescue the nation from a recession.

Does this mean that the five justices who joined Roberts’s decision also believe that the president must have the power to fire Federal Reserve governors? The answer to that is unclear. Roberts’s opinion also spends several pages explaining why “the CFPB’s single-Director configuration is incompatible with our constitutional structure,” and arguing that this single-person structure is an “historical anomaly.”

So maybe the holding of Seila Law is more limited. Maybe it means that independent agencies are still permitted, so long as they are led by multi-member boards.

We won’t know the answer to this dilemma until the Supreme Court hears another case challenging a multi-member agency under the unitary executive theory. But the stakes in this debate are profound. For, if Congress cannot insulate certain politically sensitive government functions from the president, future presidents could gain broad new power to pressure previously independent agencies to do them political favors.