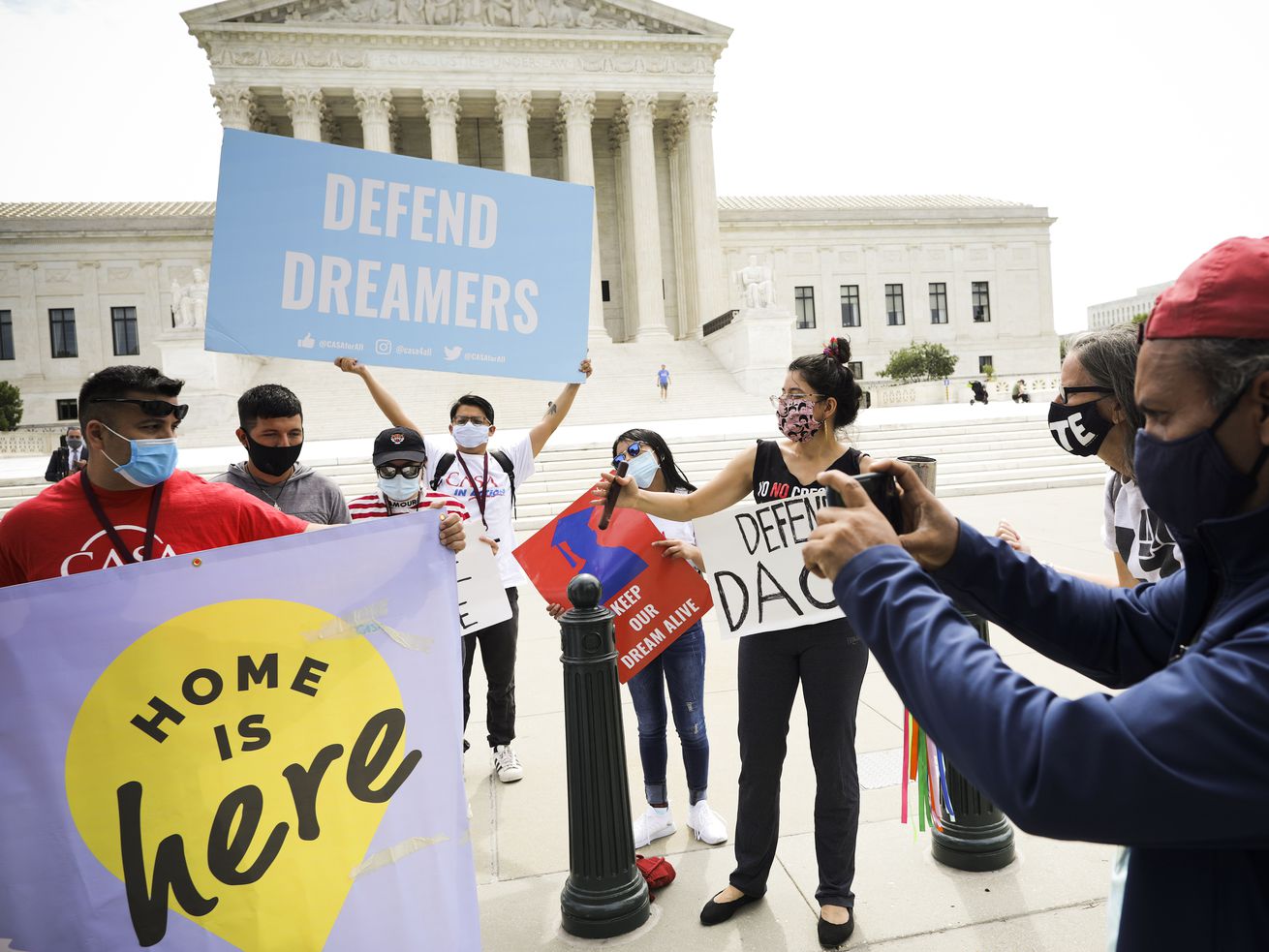 Here’s what you need to know about this hard-won victory for DACA recipients.

The US Supreme Court ruled on Thursday to keep the Deferred Action for Childhood Arrivals program alive for now, delivering a hard-won victory to hundreds of thousands of young immigrants who have been living in limbo since President Donald Trump tried to dismantle the program.

The decision marks the culmination of a years-long legal battle over Trump’s decision to terminate DACA back in September 2017. It will give a sense of security to thousands of young immigrants who have been allowed to live and work in the US under the program since it was created by then-President Barack Obama in 2012.

Since the program has been allowed to stand for now, Congress could further postpone debate over creating a path to citizenship for these DREAMers, as they are known, until after the presidential election while maintaining the status quo. Former Vice President Joe Biden, the presumptive Democratic nominee, has pledged to send a related bill to Congress if he wins the presidency this fall.

Lower courts kept the program alive while legal challenges were ongoing, shielding almost 670,000 unauthorized immigrants who came to the US as children from deportation. During that time, no new applications for DACA were accepted. It’s not yet clear whether the Trump administration will resume accepting new applicants now that the Supreme Court has ruled, but tens of thousands of immigrants would be eligible for the program and have been waiting for their chance to apply.

The Supreme Court heard oral arguments in the case, which consolidates three separate legal challenges, in November. Ever since, DREAMers have lived in limbo, not knowing whether they will be allowed to remain in the place they call home. Now, they have assurance.

Here’s what you need to know.

In 2012, President Obama created DACA via executive action. The program allowed young, unauthorized immigrants who came to the US before age 16 to obtain legal status and work authorization if they pursued education or service in the armed forces or Coast Guard and passed a background check.

Obama had previously voiced misgivings about unilaterally suspending deportations on multiple occasions. When asked about his goals for immigration reform in a 2010 interview with Univision, Obama said he needed Congress’s support: “I am president, I am not king.” The following year, Obama said it was “just not the case” that he could suspend deportations through executive order.

Advocates subsequently dubbed him the “deporter in chief” for deporting more immigrants than any other president — more than 3 million between 2009 and 2016 and peaking at 409,849 in fiscal year 2012.

When he announced the DACA program in 2012, Obama conceded that the program was only intended to be a “temporary stopgap measure” and “not an amnesty.”

“This is not a path to citizenship. It is not a permanent fix,” he said.

Most DACA recipients are participating in the workforce, paying taxes totaling at least $2.5 million in 79 metropolitan areas across the US. Tens of thousands of them work in essential fields, ranging from education to health care.

Some 16,000 work in education or administer training in some capacity, helping to fill a critical gap in the nation’s supply of credentialed teachers. According to the Economic Policy Institute, the shortage is expected to reach 200,000 by 2025, with schools in high-poverty areas suffering the most.

About 66,000 DACA recipients work in food preparation, ensuring that food gets from farm to fork. Given the disruptions to the food supply chain throughout the Covid-19 pandemic — from plant closures to farmers who couldn’t find buyers for their produce — their work has become essential to keeping grocery store shelves stocked and mitigating food shortages.

Another 27,000 DREAMers are health care practitioners or medical support staff who have been treating patients on the front lines of the coronavirus pandemic, at times risking their health or that of their family to do so. They pitched in as hospitals in coronavirus hot spots became stretched thin and as the nation braces for nationwide shortages of doctors and nurses in the coming years.

3) Trump has argued that DACA is illegal

The Trump administration has pointed to a pair of memos, including a one-page September 2017 memo authored by then-US Attorney General Jeff Sessions, which lay out the argument that DACA is unconstitutional and that the administration should therefore end the program or else risk lawsuits challenging it on that basis.

At oral arguments at the Supreme Court, the justices fixated on whether these memos provided an adequate explanation for ending the DACA. As my colleague Ian Millhiser writes, “Broadly speaking, when the government wants to end a policy that many people have relied upon, it must provide an explanation of why this policy shift is justified despite the fact that those people have come to depend upon it.”

Lower courts, however, found that the administration’s decision to end the program was “arbitrary and capricious” under the Administrative Procedure Act — the federal law that governs policymaking procedures — siding with immigrant advocates leading the legal challenges.

Trump administration officials have repeatedly stated publicly that they planned to deport DACA recipients if the Supreme Court ruled in their favor, but that hasn’t come to pass.

Acting US Citizenship and Immigration Services (USCIS) Director Ken Cuccinelli told reporters in October that DACA recipients would “join the ranks of millions of people” living in the US without authorization if the Supreme Court struck down the program. And Matthew Albence, acting director of US Immigration and Customs Enforcement, similarly said in January that the agency would carry out outstanding deportation orders against DACA recipients if the justices sided with Trump.

DACA recipients were therefore concerned that immigration authorities could use their personal information, which they registered in a federal database when applying for the program, to track them down. That data, which is housed in USCIS, includes their home addresses, passport photos, educational history, and fingerprints. ProPublica’s Dara Lind reported in April that ICE agents can access DACA recipients’ personal information, despite both the Obama and Trump administration’s assurances to the contrary.

But now that DACA remains intact, the Trump administration will not be able to carry out deportations of DREAMers as planned.

The fate of unauthorized immigrants brought to the US as children has been a subject of contentious legislative debate for years.

The primary legislative proposal to attempt to tackle the problem was the DREAM Act, first introduced in 2001, which would have offered unauthorized immigrant students the opportunity to apply for provisional protection from deportation and then a green card. The act has been introduced in Congress numerous times over the years but has never mustered enough support to pass.

In 2018, Democrats and Republicans failed to reach a compromise on DACA legislation during open debate on the Senate floor. There were hopes that the fact a vote in the Republican-controlled chamber was happening at all signaled political will for a solution. A compromise bill that would have paired border security funding with protections for DREAMers seemed the most likely to pass, but support fizzled after Trump threatened to veto it.

In June 2019, the House — controlled by Democrats — passed a bill, known as the “Dream and Promise Act,” to protect DACA recipients. It offered a pathway to citizenship for about 2.5 million DREAMers and other immigrants with temporary legal status (the original DREAM Act was narrower, covering about 1.5 million people). Senate Majority Leader Mitch McConnell has said he is unlikely to allow a vote in the Republican-controlled chamber.

6) Democrats have recently renewed pressure on Congress to take action

Senate Minority Leader Chuck Schumer and Sens. Dick Durbin and Bob Menendez renewed their calls in April for Republicans in the Senate to bring the Dream and Promise Act to a vote, saying that the pandemic has made it all the more urgent. They also called on the Trump administration to automatically extend work authorization for DACA recipients.

Biden has also vowed on the campaign trail to prioritize working with Congress to pass legislation offering a path to citizenship for DREAMers if he becomes president. He says he would make sure DREAMers can access federal student loans and debt-free community college and explore all legal options to prevent them from being separated from their families in the US.

“We should never endanger or throw into question their ability to contribute to our nation,” Biden said in March.