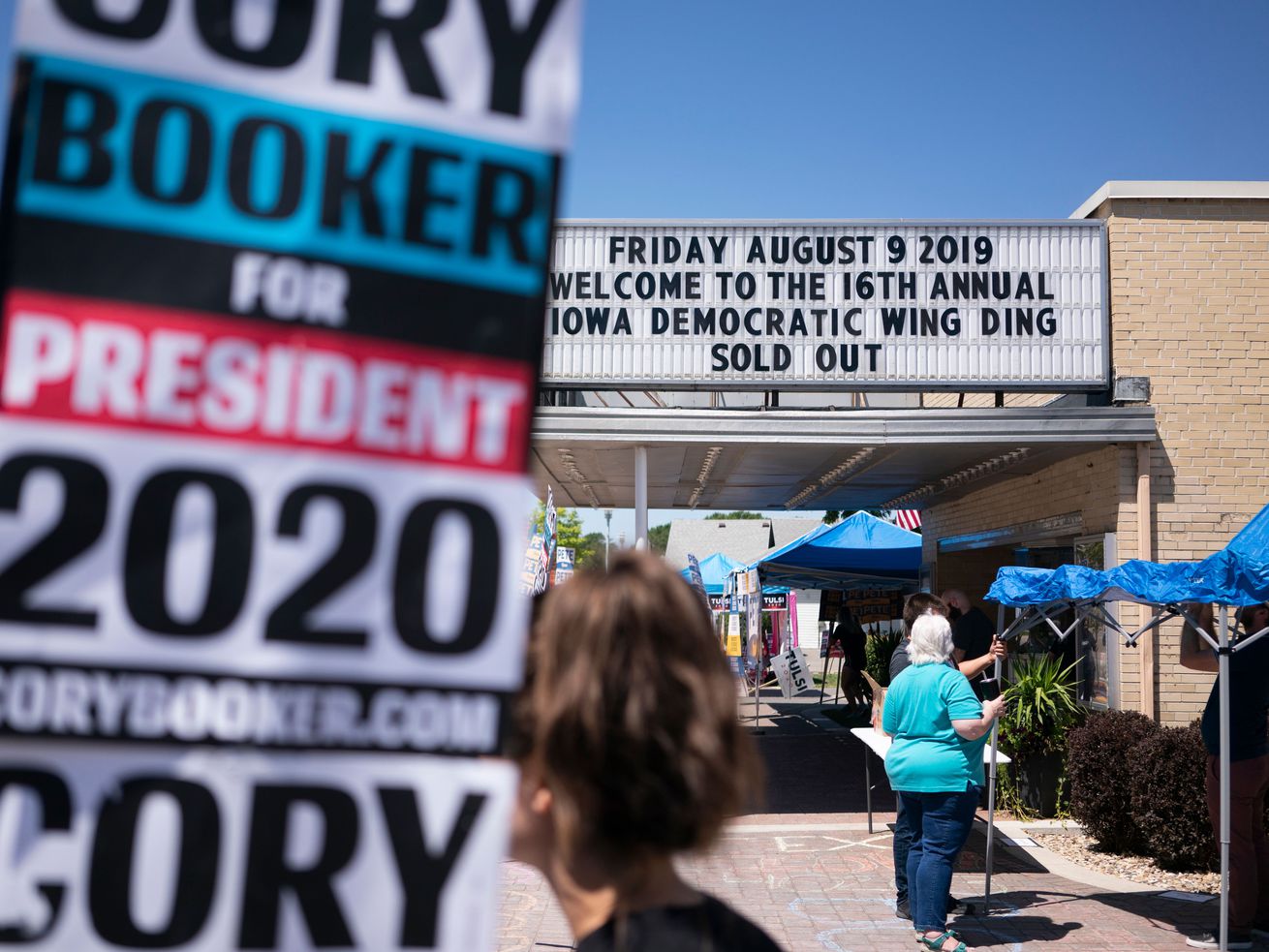 The DNC is set to reject Iowa’s virtual caucuses, which could have major repercussions for the state.

The Iowa caucuses have been thrown into serious turmoil.

Six months after the Iowa Democratic Party presented its plan to the Democratic National Committee to hold a so-called “virtual caucus” over a phone system alongside the regular caucus this February, the DNC will recommend rejecting the plan, per a statement from the national party. The DNC cited concerns the phone system used for tele-caucusing could be susceptible to hackers.

The idea of a virtual caucus had always met with a bit of skepticism from some party activists. Now, concerns about hacking have doomed it.

“The candidates aren’t promoting it, the state party isn’t promoting it,” John Deeth, a member of the Johnson County Democrats executive committee and a longtime party activist, told Vox before the news about the DNC’s decision was public. “They’re doing a virtual caucus because they have to, but they don’t want anybody to do it.”

On Friday afternoon, top DNC officials announced they would recommend the party’s Rules and Bylaws Committee reject Iowa and Nevada’s plans for their tele-caucus system. The DNC added the committee would consider a waiver if the states can’t comply with a mandate to increase inclusivity in their caucuses.

“We concur with the advice of the DNC’s security experts that there is no tele-caucus system available that meets our standard of security and reliability given the scale needed for the Iowa and Nevada caucuses and the current cyber-security climate,” said DNC Chair Tom Perez and Rules and By-Laws Committee Co-Chairs Lorraine Miller and Jim Roosevelt in a statement. “For these reasons, we are recommending to the committee that virtual caucus systems not be used in the Iowa and Nevada 2020 caucus processes, and unless compliance can be met through other means, that the committee consider a waiver.”

The reason a virtual caucus system came into existence in the first place was the DNC responding to longtime criticism that Iowa’s caucus should be accessible to voters who can’t show up in-person. The DNC mandated that Iowa and Nevada — the two early states left with caucuses rather than primaries — find a way to become more accessible. Now, the national party is nixing its virtual caucus plans. Some fear the fallout could end the Iowa caucuses as we know them and have dramatic effects on the nomination process as a whole.

As the first state to vote in the primary calendar, it’s hard to overstate the importance of Iowa. The first caucuses show which candidates have momentum and which don’t, and the media narrative of winners and losers culls out the field of candidates.

“Iowa doesn’t decide who will be president, but it decides who will not,” said David Redlawsk, a political science professor at the University of Delaware and an expert on the Iowa caucuses. “It’s a very big deal. … The rug’s getting pulled out from under them. It’s only five months from the caucus, which doesn’t give a lot of time to come up with a viable alternative.”

The new virtual caucus component had been in limbo for months in Iowa as party leaders tried to come up with a new system and awaited the DNC’s decision. The alternative could be to move Iowa to a primary election, but the state would then almost certainly have to move back in the calendar because New Hampshire’s first-in-the-nation primary status is literally written into the state’s law.

Now that the state no longer appears poised to do a virtual caucus, the fate of Iowa’s hallowed caucuses is being thrown into question. It could represent a seismic shift for American politics.

The push to create a virtual caucus system, briefly explained

Caucuses have always been controversial because they are long, complicated affairs where caucus-goers meet and literally sort themselves into groups based on the candidates they support. Unlike the relative ease of a primary election, caucuses can take hours and exclude people who can’t show up on caucus night if they have disabilities, are elderly, or just have job or childcare commitments.

Over the past few cycles, especially 2016, there have been increasing complaints about how tough it is for everyone to participate. In addition to the accessibility issue for many, the caucuses have gotten more and more unwieldy, because voter turnout has increased over the years.

For this reason, the DNC has actively tried to get caucus states to switch to primaries, with a fair amount of success. But Iowa and Nevada still haven’t made the change. Instead, they attempted to modify their current system by submitting a plan to the DNC to hold virtual caucuses — where voters could literally phone in their candidate choices.

The plan the Iowa Democratic party came up with would have given virtual caucus-goers six different days/times to call and choose their candidates. The last available day would have been February 3 — caucus day itself. Users would have dialed a phone number, entered a unique pin and their date of birth to verify their identities, and ranked up to five 2020 candidate choices over the phone.

What was trickier is how these people’s votes were to be counted and how much they would have accounted for. Here’s how it was supposed to work: All of Iowa’s four congressional districts would have been allocated up to an additional 10 percent of the overall state delegate equivalents (or, the delegate totals from each county). In other words, if one congressional district had 400 people going to their delegate convention, they would get an extra 40 delegates that could be awarded based on the results from the virtual caucus.

But the DNC was also concerned about whether or not the system could be hacked, something that came up at its most recent Rules and Bylaws Committee meeting in San Francisco earlier this month. They tested the system and found it could be easily manipulated.

But some state party officials said the networks that were hacked weren’t the same as the virtual caucus systems they were building; they claimed the tele-caucuses were different than the teleconference system that was hacked into by a security firm working for the DNC.

Some Iowa Democrats are mad at the DNC

Among longtime party leaders in Iowa, there’s a lot of frustration over how long this process has taken.

The DNC approval process has been painstakingly slow, infuriating some Iowa Democrats who believe the national party is dragging its feet deliberately. The Iowa Democratic Party first submitted its plan to the DNC in February and asked for expedited review. The DNC didn’t take it up until its June meeting, multiple sources told Vox.

The DNC didn’t immediately respond to Vox’s request for comment.

“It’s inexcusable they didn’t take a look at this earlier,” said Dave Nagle, a former Iowa congressman who has been involved in virtual caucus planning told Vox. “They were able to blindside us. It’s all just Chairman Perez’s deep hostility toward the Iowa caucus, which he’s expressed on numerous occasions.”

With five months to go, there aren’t a lot of other options. The Iowa Democratic Party could send out absentee paper ballots to voters, but that is also a tough alternative because New Hampshire could argue a ballot element to the caucus looks too much like a primary.

Iowa Democrats “have every right to be not just frustrated but angry,” Redlawsk said. “They’ve been given guidance, the DNC has worked with them on this, then past the last minute everything changes. The DNC mandate is to open up the process and this virtual caucus was the solution, it’s not an alternative to only get back to in-person caucusing.”

In limbo over the past few months, presidential campaigns and local party leaders were left trying to figure out how to strategize. “We’ve never done this before so we as a campaign would be interested to see demos of the technology to see if it’s going to work,” a Democratic campaign aide told Vox on Thursday, hours before the DNC decided to recommend to scrap the virtual caucus.

Setting aside concerns about potential hacking, campaign staff and local officials were also concerned about the 10 percent cap of state delegate equivalents for virtual caucus participants. That cap caused some in Iowa to question whether the convenience of caucusing virtually would be worth the tradeoff if their votes were worth less.

“Over and over and over, what I hear from people is ‘I don’t want to virtual caucus. It counts less,’” Deeth said.

Some presidential campaigns also had this concern.

“It’s concerning we may well be diluting some Iowans’ votes by setting it at an arbitrary number rather than being proportional,” the Democratic campaign aide told Vox.

Wouldn’t it be easier for Iowa to do what other states did and switch to a primary?

Absolutely. But, Iowa loves its first-in-the-nation caucus status, and there’s a huge barrier to Iowa moving to a primary: New Hampshire.

New Hampshire has long claimed the nation’s first primary (which Iowa has worked around with a caucus), something it’s been able to hang onto for years because of a certain state law. This law saws that if any other state tries to move its primary before New Hampshire, it allows New Hampshire Secretary of State Bill Gardner to change the primary date, moving it a week before the other state.

In other words, New Hampshire can leapfrog in front of any other state who tries to hold a primary before it, a way that state has been able to retain its first-in-the-nation status for decades. Iowa has only been able to hang onto its “first” status precisely because it’s a caucus.

“Iowa could go where it was in the calendar as long as it didn’t have a primary,” Redlawsk said.

The entire reason Iowa party leaders were trying to do a virtual caucus was to address longstanding voter complaints without turning themselves into a primary state, which many people fear will kick off a bitter fight with New Hampshire and move the state back on the calendar.

“You don’t want to encourage the transformation of the Iowa caucus into a primary,” Nagle told Vox. “How do you do so in a manner that doesn’t threaten New Hampshire’s right to have the first primary?”

Now, they will have to go back to the drawing board — with just five months to go until caucus day on February 3. That could have huge repercussions for 2020: A massive number of candidates are banking their hopes on winning Iowa out of the gate. There have always been challenges to the Iowa caucus, and some fear there’s a very real chance this could be the beginning of the end.

Some in Iowa, however, think it’s past time the caucus gets scrapped.

“I want a primary, even if we lose first,” Deeth told Vox. “I think this just doesn’t work anymore.”

Update: This post has been updated with a statement from the DNC.