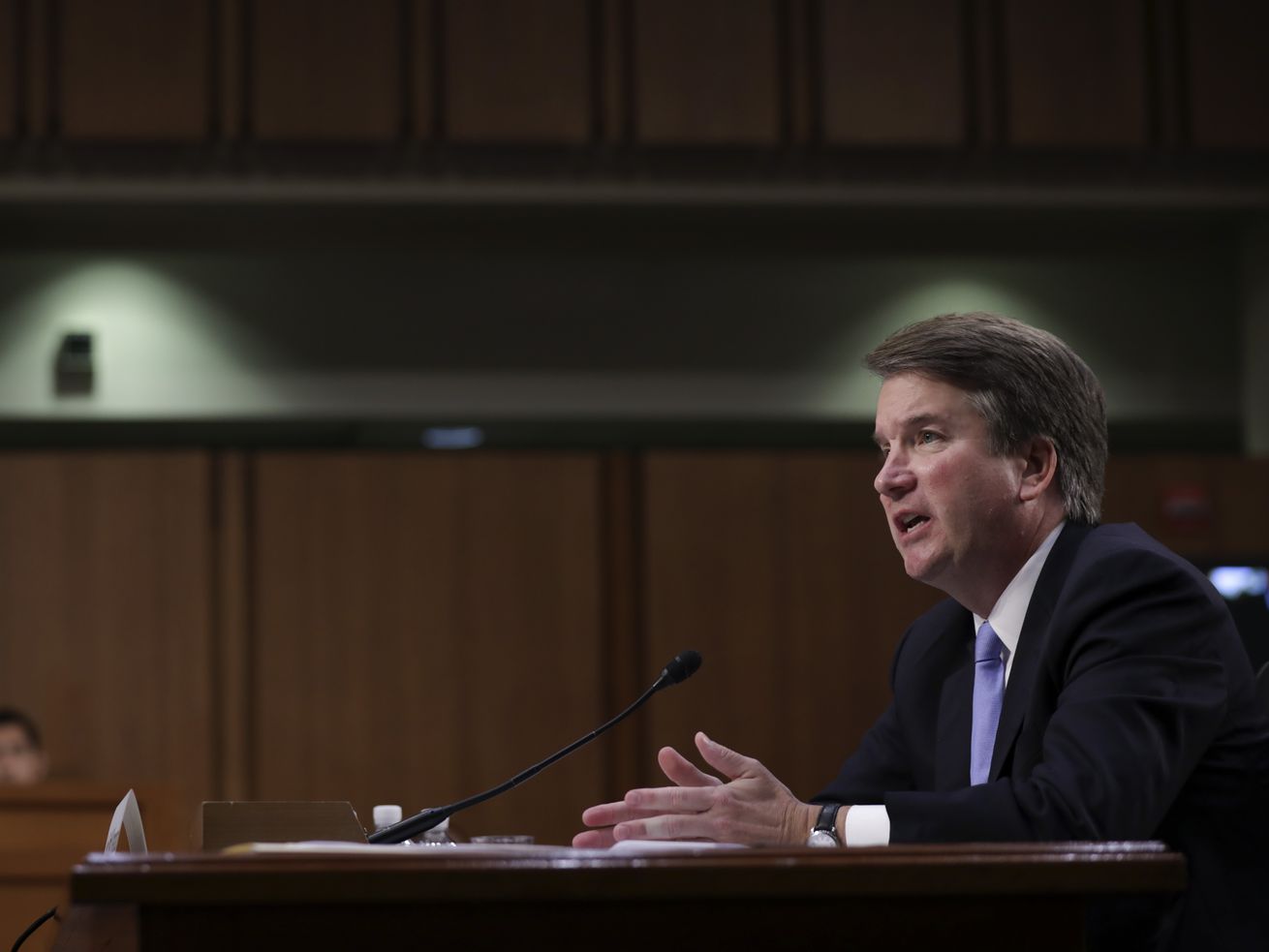 What happens to Kavanaugh next will be a test of #MeToo.

That year, Clarence Thomas was nominated by President George H.W. Bush to the Supreme Court, and Anita Hill testified that he had sexually harassed her when they worked together several years prior. Sen. Joe Biden, then the chair of the Senate Judiciary Committee, failed to call additional witnesses whose testimony could have supported Hill’s account. Thomas has now served on the Supreme Court for nearly 30 years.

Today, the details are different, but the basic outline is eerily similar. In July, a woman reported to Democrats in Congress that Supreme Court nominee Brett Kavanaugh tried to sexually assault her when they were both in high school. He has denied the allegation.

Sen. Dianne Feinstein (D-CA), the ranking Democrat on the Judiciary Committee, knew about the allegation but declined to share it with the other Democrats on the committee, according to Ronan Farrow and Jane Mayer at the New Yorker. So it didn’t come up during Kavanaugh’s confirmation hearings.

Now the news is out, and the question is whether 2018 will be a replay of 1991. The last year, of course, has seen the rise of the #MeToo movement, as more and more Americans come forward to report sexual harassment and assault. Some of those accused — though not all — have faced significant consequences, including the loss of their jobs or, in a few cases, criminal prosecution.

But the outcome of the allegations against Kavanaugh will be a profound test of the power of #MeToo. Before the movement began, a Supreme Court nominee could be publicly accused of sexual misconduct, and — thanks in part to the inaction of Democrats in Congress — be confirmed anyway. So far, Kavanaugh’s confirmation process has unfolded in much the same way Thomas’s did. We’re about to find out if the end result will be the same.

According to Farrow and Mayer, a woman wrote a letter in July to her Congress member, Rep. Anna Eshoo (D-CA), reporting that when she and Kavanaugh were in high school in the early 1980s, he attempted to sexually assault her at a party. Kavanaugh attended Georgetown Preparatory School in Bethesda, Maryland, and graduated in 1983, while the woman went to a neighboring school.

At the party, the woman said Kavanaugh held her down and covered her mouth with his hand, and that he and a classmate turned up the music in the room to drown out her voice. The woman said the experience caused her ongoing pain and that she had sought psychological treatment as a result.

“I categorically and unequivocally deny this allegation,” Kavanaugh said in a statement to the New Yorker. “I did not do this back in high school or at any time.”

Feinstein also received the letter, Farrow and Mayer report, but declined to share it with her fellow Democrats on the Judiciary Committee. “A source familiar with the committee’s activities said that Feinstein’s staff initially conveyed to other Democratic members’ offices that the incident was too distant in the past to merit public discussion, and that Feinstein had ‘taken care of it,’” Farrow and Mayer write.

After contacting Eshoo and Feinstein, the woman apparently stopped trying to speak out. “She had repeatedly reported the allegation to members of Congress and, watching Kavanaugh move toward what looked like an increasingly assured confirmation, she decided to end her effort to come forward,” Farrow and Mayer write.

Her report might never have seen the light of day, had Ryan Grim of the Intercept not reported on the existence of the letter on Wednesday. Now some progressive groups are calling for Kavanaugh to withdraw his nomination. Meanwhile, Sen. Chuck Grassley (R-IA), the chair of the judiciary committee, has released a letter from 65 women who knew Kavanaugh in high school, saying that he “behaved honorably and treated women with respect.”

After the hearings last week, during which Kavanaugh offered evasive answers to questions about abortion rights, affirmative action, and other subjects, his confirmation seemed all but assured. It remains to be seen whether the newly revealed allegations will change things.

Biden had heard about the allegations but did not delay the judiciary committee’s vote on Thomas. It was only after the vote, Terkel writes, that Hill was identified in the press and, under pressure from women in Congress, Biden reopened hearings to allow Hill to testify.

But Biden reportedly caved to Senate Republicans on a number of aspects of the hearing process. He let Thomas testify before and after Hill, including at 9 pm on a Friday when many Americans would be watching, Terkel writes. And as Farrow and Mayer note (Mayer co-authored a 1994 book with Jill Abramson on the Thomas confirmation hearings), three women were willing to testify in support of Hill’s account, but Biden failed to call them.

Last year, former Rep. Pat Schroeder (D-CO) recalled what happened when she complained to Biden that Thomas’s hearings were being rushed. “He literally kind of pointed his finger and said, you don’t understand how important one’s word was in the Senate, that he had given his word to [Sen. John Danforth (R-Mo.), Thomas’s chief sponsor] in the men’s gym that this would be a very quick hearing, and he had to get it out before Columbus Day,” she told the Washington Post.

Race also became a factor in the hearings, with Thomas calling them “a high-tech lynching for uppity blacks,” as Victoria M. Massie noted for Vox in 2016. Meanwhile, Hill has asked, “how do you think certain people would have reacted if I had come forward and been white, blond-haired and blue-eyed?” Thomas was confirmed and sits on the Court to this day.

What happens next will be a test of the #MeToo movement

Calls have been coming for months to revisit Hill’s reports in the context of #MeToo. In a cover story for New York magazine earlier this year, Jill Abramson suggested that perhaps Thomas should be impeached for lying under oath about his conduct toward Hill. In an interview on Last Week Tonight this summer, Hill said “I’m feeling more optimistic than I was 27 years ago” and that harassers “should be terrified” of facing a reckoning.

But now the country faces a test of how much has really changed. Like Biden, Feinstein was apparently unwilling to investigate allegations against a nominee aggressively, though her reasons appear somewhat different.

“Sources familiar with Feinstein’s decision suggested that she was acting out of concern for the privacy of the accuser, knowing that the woman would be subject to fierce partisan attacks if she came forward,” Farrow and Mayer write. “Feinstein also acted out of a sense that Democrats would be better off focussing on legal, rather than personal, issues in their questioning of Kavanaugh.”

On Friday, a Feinstein spokesperson issued a statement to media telling a somewhat different version of events. “The Senator took these allegations seriously and believed they should be public,” the statement said. “However, the woman in question made it clear she did not want this information to be public. It is critical in matters of sexual misconduct to protect the identity of the victim when they wish to remain anonymous, and the senator did so in this case.”

Whatever the case, as Vox’s Zack Beauchamp notes, if confirmed, Kavanaugh could cast the deciding vote to overturn Roe v. Wade, and would surely be an influential voice in a number of decisions affecting women’s rights. If he tried to assault a woman, even years ago, and if he is lying about that now, that information is highly pertinent to his ability to respect women’s equality and autonomy in his decisions.

If Farrow and Mayer’s reporting is correct, Feinstein apparently acted in a way that, even given her reported concern for the accuser, feels very 1991. She seems to have been banking on the idea that drawing attention to the allegations against Kavanaugh would be a losing move for Democrats. Essentially, she appears to have been betting against #MeToo, figuring that the power of public outcry against sexual misconduct would be too weak a weapon against the nominee. We’re about to find out if she was right.

So far, it has been hard to measure the impact of #MeToo. We can point to the firings of high-profile men, but it’s more difficult to tell how values and attitudes in the country are changing. But now, senators are hurtling towards a chance either to send a man accused of attempted sexual assault to the Supreme Court or to decide that such allegations disqualify him from one of the highest offices in the country, one that would give him the power to make decisions with life-or-death consequences for Americans.

In the coming days, Republicans and Democrats will surely weigh how their constituents will view their action — or inaction — on Kavanaugh’s confirmation. Where they come down will say a lot about what’s changed, and what hasn’t, since 1991.