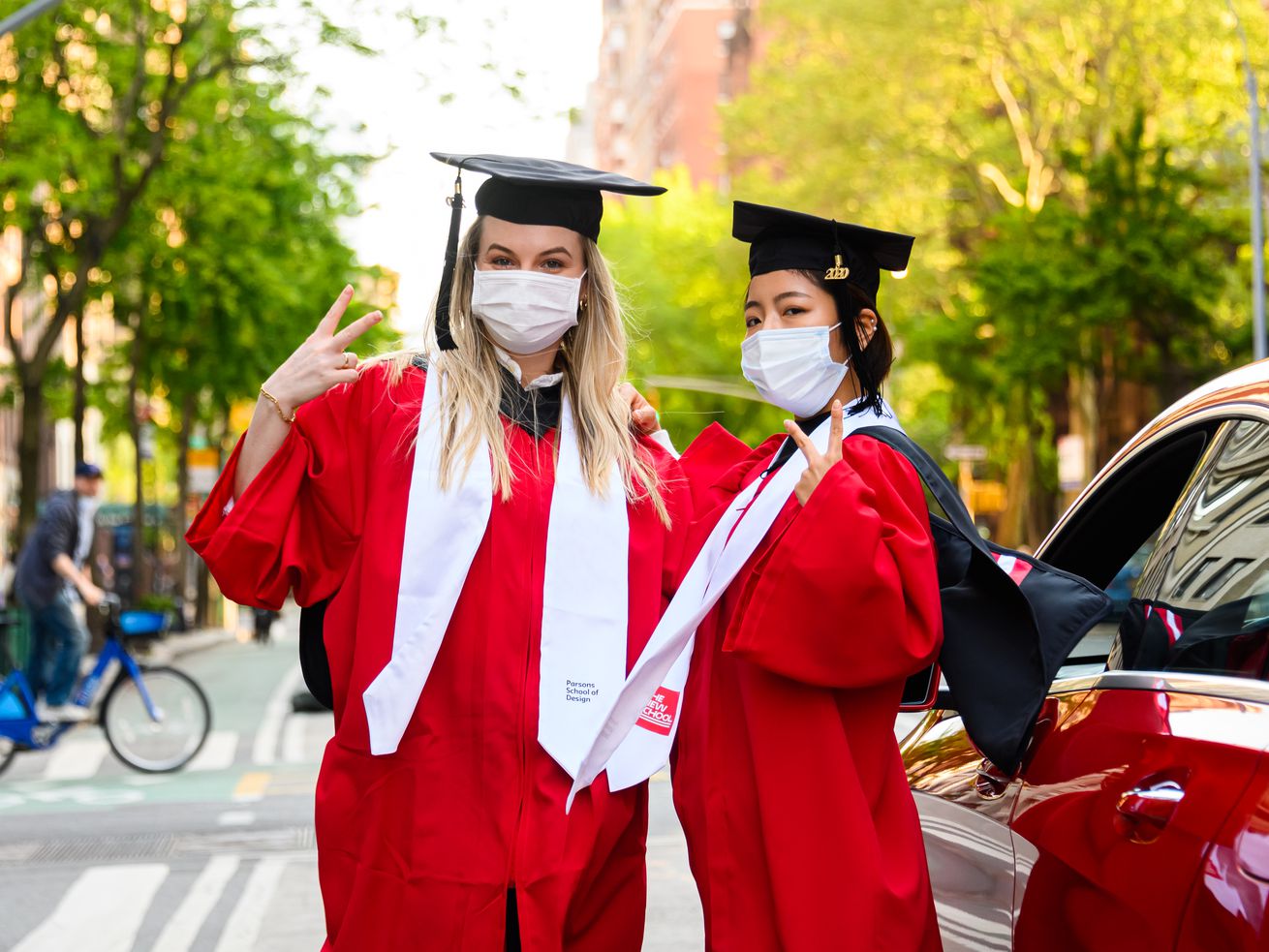 Graduates of The New School with their gaps, gowns, and masks. | Noam Galai/Getty Images

Student loans aren’t being forgiven, but are being frozen for most borrowers.

One of the less-discussed benefits in the CARES Act is assistance for those with federal student loans. But unlike other programs in the stimulus legislation, no application is required.

The law doesn’t cancel student debt, but it does freeze payments — and their interest — for everyone who has a federally held loan. Most borrowers won’t have to worry about making any loan payments until October — for now.

A number of lawmakers don’t think the law goes far enough. The HEROES Act — a $3 trillion fourth congressional stimulus package — passed by the House of Representatives Friday, would forgive up to $10,000 of both federal and private loans for borrowers meeting the criteria to be deemed “economically distressed.” The provision (which like the rest of the HEROES Act was crafted by House Democrats) is unlikely to make it into the final text of any future relief bill that gets passed by Congress, however.

Nevertheless, Senate Democrats are also pushing some kind of loan forgiveness in the next bill — their proposal is similar to that of the HEROES Act: The federal government would pay at least $10,000 toward every borrower’s federal student loan balance. Other lawmakers have advocated for loan relief for essential workers, while some progressive advocacy groups, like Young Invincibles, have called for more sweeping relief akin to some of the debt cancellation proposals put forward during the Democratic primary.

Shortly after the passage of the CARES Act, former candidate Sen. Elizabeth Warren — who proposed forgiving up to $50,000 of debt for federal student loan borrowers during the primary — tweeted, “Student loan debt cancellation MUST be a part of the next emergency coronavirus package.” Presumptive Democratic nominee Joe Biden has released a modified version of the progressive plans championed by Warren and Sen. Bernie Sanders; his plan would cancel the tuition-related undergraduate debt of borrowers earning less than $125,000 per year.

But Republican lawmakers have been resistant to such calls; one GOP aide told Inside Higher Ed members of their caucus have no “appetite for debt forgiveness or cancellation because it has nothing to do with Covid.”

And a Democratic staffer told Higher Ed that Democrats were pessimistic about the chances of any loan forgiveness being included in future bills.

“Republicans balked at the large-scale cancellation of student loans,” the Democratic staffer said of discussions conducted around the CARES Act. “We pushed until the end, but it’s not happening.”

While complete loan forgiveness seems unlikely, lawmakers may be able to find common ground on some forgiveness, either for certain types of workers or a smaller forgiveness amount for all loan holders. And though there’s little sign of the pandemic abating in the US, the country could be in the same dire economic straits it is in at the moment — if things aren’t even worse — come October, when the freeze on loan payments is set to expire. Such a scenario could lead to increased pressure on lawmakers to include provisions assisting borrowers in future aid packages, even if those measures don’t go quite so far as to forgive all outstanding debt.

Starting March 13, with the signing of the CARES Act, student loan interest was temporarily set to zero — for now, this will last until September 30, 2020.

For about 92 percent of borrowers, this freezes however much they owe until then — and ensures there will be no penalty or late fees for not making normal monthly loan payments. For now, all federal student loans have been placed in “administrative forbearance,” a flexible method of suspending payments the Department of Education can use during natural disasters and other emergencies.

There’s no opt-in; even if you have automatic debits set up, there’s nothing you need to do to take advantage of the program. And for those that still have concerns, here is a brief guide with answers to some common questions.

Are any loans being canceled?

The CARES Act does have a provision canceling loans in a very specific case: if you were enrolled and were forced to withdraw from school due to concerns about the coronavirus. The provision does not apply to private or Perkins loans.

Many schools have extended withdrawal deadlines, Dora Gicheva, an economics professor at the University of North Carolina told Vox — with some institutions, like the University of North Carolina, allowing students to withdraw after completing the semester. If you’re unclear about your school’s withdrawal rules, you should contact it directly; it should also have information on what portion of the loan might be eligible for cancellation.

It isn’t clear how many people will be able to benefit from this — but for most people, no, there’s no student loan cancelation. And even for beneficiaries of this rule, loans taken for completed semesters must still be repaid, once the temporary repayment and interest freeze period is over.

What if I have a privately held loan?

None of this applies to federal loans owned by private lenders, private student loans, or federal Perkins loans owned by colleges and universities. A group of Democratic and independent senators has urged private loan holders to provide relief for borrowers — and some, like Navient and Sallie Mae, have agreed to allow borrowers to place private loans in forbearance (generally without the interest freeze borrowers with federally held loans enjoy).

The easiest way to find out who holds your loan is through the Department of Education’s Federal Student Aid website. You’ll need an FSA ID to log in — more recent graduates should already have one, but those who applied for loans using paper applications may need to create one (there’s an option to do so on the homepage of the Federal Student Aid website). After you log in, information about your loans — and who services them — will be available on your dashboard.

If it turns out you have a Perkins loan or another federal loan owned by a private institution, the Department of Education notes you can benefit from the freeze created by the CARES Act by consolidating those other loans into a Direct Consolidation Loan.

Doing so comes with some potential dangers, however. The good news is that if you’re paying multiple loans right now, you’ll have one payment after you consolidate — and that consolidated loans are part of the temporary zero percent interest program. The potential trouble is you could end up with a higher interest rate, forcing you to pay more than you would have otherwise. And, as soon as you consolidate, capitalized interest is added to your balance — so the size of your loan will increase right away.

Whether this is worth the risk will depend on the individual and their future financial outlook, and the details and size of their outstanding interest.

Can I still make payments on my loan?

Yes, you can, and you’ll be doing so at a time when interest isn’t building up. Any payments you make will first be applied to your interest, and once that’s paid off — or if it’s been paid already — your payment will go toward decreasing your loan balance, or principal.

I’m on a special payment plan — will that be affected by this?

The provisions laid out in the CARES Act cover everyone with a federal student loan besides those exceptions mentioned above.

This means if you’re on a repayment plan that’s based on your income, you won’t face any penalties for not sending in your agreed payments for the next few months.

The same is true if you’re on a payment plan arranged with a private collection company — as long as they are one that’s under contract with the Department of Education rather than with a private loan holder. Collectors have been directed by the department not to attempt collections, and not to take out automatic debits from your account.

If you have seen a debit on your account (after this policy went into effect on March 25) the Department of Education asks that you call it at 800.621.3115 (or 877.825.9923 if you are deaf or hearing impaired). Like other federally managed loans, loans in collection are exempt from interest until September 30.

In general, if you’re losing wages because of reduced hours, or from being laid off, you can enroll in (or alter the terms of) an income-based repayment plan. Basically, you’ll tell the department how much you’re making now, and you’ll be offered a new minimum monthly payment. You can apply for that here on the Federal Student Aid website.

Things are a bit more complicated if you’re on a public service loan forgiveness plan. As long as you’re still working full time (more than 30 hours a week) in a role the Department of Education classifies as public service, you can skip payments until September without penalty. If you are no longer working full time, or have been laid off, you cannot get the benefit unless you obtain a new job that the department classifies as public service — and that meets the weekly hour requirement.

A Department of Education spokesperson told Vox that those who’ve lost public service loan forgiveness eligibility due to Covid-19 should remember that the program only requires a public service worker make 120 monthly payments on a loan, not that they be consecutive. This means if you were in the program, got laid off, and get another qualifying job two years from now, you just need to submit a new certification form with the Department of Education, and after being reapproved, you can pick up where you left off.

What if things are still bad in October?

Lawmakers are approaching most economic issues incrementally at the moment, and no one knows what will happen during the summer. States are reopening nonessential businesses, meaning more people may have paychecks come October. However, reopening could also mean that fewer people are employed in October, should relaxations of stay-at-home orders lead to a sharp increase in Covid-19 cases and deaths — and more stringent lockdowns in response.

Should economic conditions continue to be grim — and economists who spoke with Vox’s Emily Stewart and Dylan Scott believe they could — lawmakers will likely face pressure to extend the temporary loan payment and interest freezes.

In the short term, student loan issues don’t appear to be a candidate for inclusion in the fourth congressional stimulus package, despite House Democrats’ efforts to have it include some measure of loan forgiveness.

The student loan provisions in the HEROES Act do signal Democrats will continue to press the issue, but Republicans have signaled they are concerned about including measures to future stimulus bills that will add to the national debt; Senate Majority Leader Mitch McConnell recently said, “We can’t keep throwing endless amounts of borrowed money at the problem in hope to fix it.”

Any compromise legislation between House Democrats and Senate Republicans then, seems more likely to look like what has already been passed — a temporary hold on payments.