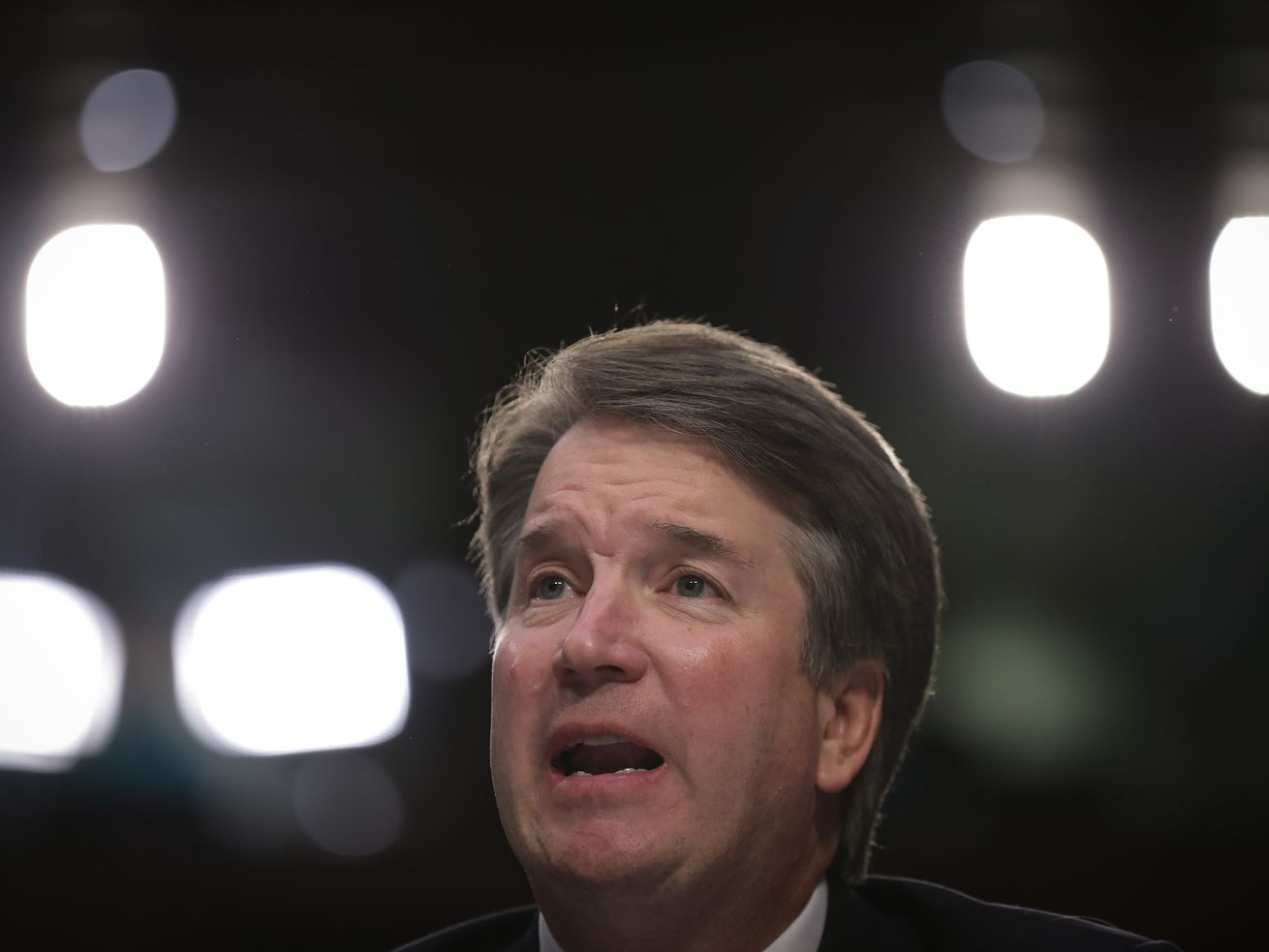 Democrats and Republicans can’t seem to agree on how to address them.

Brett Kavanaugh’s Supreme Court nomination could be in jeopardy.

While Kavanaugh’s ascent to the high court seemed virtually assured early last week, an allegation of sexual assault now threatens to derail his confirmation — although Republicans and Democrats appear split on how to handle it.

Christine Blasey Ford, a Palo Alto University professor of clinical psychology, accused Kavanaugh of sexually assaulting her while the two were teenagers. In a Washington Post report on Sunday, Ford says that Kavanaugh tried to force himself on her while they were at a party, tried to remove her clothing, and put his hand over her mouth when she attempted to scream. Ford had initially communicated these allegations to Rep. Anna Eshoo as well as Sen. Dianne Feinstein, a top Democrat on the Senate Judiciary Committee.

Kavanaugh has flatly denied the accusation, releasing a statement through the White House on Monday: “This is a completely false allegation. I have never done anything like what the accuser describes — to her or to anyone. Because this never happened, I had no idea who was making this accusation until she identified herself yesterday.”

Lawmakers on both sides of the aisle are now calling for an investigation into the allegations, though it’s still unclear what form this review will take — and whether it will actually delay Kavanaugh’s confirmation process. Kavanaugh and Ford have both said they are willing to testify about the accusations before Congress. President Trump chimed in on Monday and indicated that he was open to hearing more on this subject and amenable to a slight delay in the process, according to a pool report.

“We want to go through a full process … and hear everybody out,” Trump said. “[Kavanaugh] is one of the great intellects and one of the finest people. … If it takes a little delay, it’ll take a little delay.”

The stakes for both sides are incredibly high. Liberals are already wary of the Supreme Court after Republicans held Antonin Scalia’s seat open for more than a year — replacing President Obama’s pick of Merrick Garland with Trump’s pick of Neil Gorsuch. And if confirmed, Kavanaugh would be the second sitting Supreme Court justice accused of sexual misconduct (Clarence Thomas being the other). Meanwhile, Republicans view appointing Kavanaugh to replace Anthony Kennedy as key to a long-held goal: chipping away at or outright overturning the right to abortion outlined in Roe v. Wade.

News of the sexual assault allegations against Kavanaugh first emerged in public at the end of last week, after Feinstein shared a cryptic statement announcing that she had referred a letter concerning his nomination to the FBI. According to multiple news reports, Feinstein’s office received the letter in late July — though she did not divulge details about it to Democrats on the Judiciary Committee until last week, when the Intercept reported its existence.

On Friday, the New Yorker’s Jane Mayer and Ronan Farrow published an explosive report detailing the contents of that letter, which included disturbing allegations of sexual assault. In that report, they maintained the anonymity of the accuser, something Ford had requested.

As the spotlight on the letter began to grow — and reporters started asking around about the accuser’s identity — Ford herself decided to step forward and provide her account directly to the Washington Post. In that report, she said she had initially held off from going public because she didn’t want to deal with the retaliation and backlash that could result for herself and her family. Given the attention on the letter and the increasing questioning of its validity, Ford says her calculus changed.

“Now I feel like my civic responsibility is outweighing my anguish and terror about retaliation,” she told the Post.

In her description of the incident, Ford says that she attended a party in the 1980s that took place in a house in Montgomery County, Maryland. At the party, she says she went to use the bathroom and was pushed into a bedroom by Kavanaugh and his classmate Mark Judge — both of whom she describes as “stumbling drunk.” Ford says she had also had a beer that evening, but notes that both Kavanaugh and Judge were heavily intoxicated.

Ford says Kavanaugh then pushed her onto a bed and tried to force himself on her while attempting to remove her clothes. She adds that Kavanaugh put his hand over her mouth when she tried to scream and that she was only able to free herself after Judge jumped on the bed and toppled the group.

“I thought he might inadvertently kill me,” she said.

Given how long ago the incident happened, Ford admitted that there are aspects of the assault that she doesn’t fully remember. In her interview with the Post, she provided notes from a therapy session in 2012, as well as the results of a polygraph test to corroborate her story. Ford’s lawyer Debra Katz, who had previously represented one of the women who levied abuse allegations against former New York Attorney General Eric Schneiderman, has said Ford characterizes the incident as “attempted rape.”

There are a number of outstanding questions about why Ford waited so long to come forward, and why Feinstein’s office held off on sharing the letter. Feinstein’s office says the delay was out of concern for Ford’s privacy — an effort that Ford’s lawyer has praised. As another source told the New Yorker, Feinstein also sought to focus on more public aspects of Kavanaugh’s record in her evaluation of him, and members of her staff appeared to suggest the incident may have happened too long ago to warrant public review.

Democrats argue that Kavanaugh’s vote needs to be delayed. Republicans are more divided.

All 10 Judiciary Committee Democrats, including Feinstein, have pressed for a delay in a committee vote on Kavanaugh, which is currently set to take place this Thursday, September 20. They argue that more time is needed to conduct a thorough investigation into the sexual assault allegations before the panel can effectively consider Kavanaugh’s nomination.

“Now that her story is public, it is even more important that we give the [FBI] the time it needs to follow up,” they wrote in a recent letter to Committee Chair Chuck Grassley. “All Senators, regardless of party, should insist the FBI perform its due diligence and fully investigate the allegations as part of its review of Judge Kavanaugh’s background.”

A small set of Republicans, including Sens. Jeff Flake and Bob Corker, have also called for a delay in the vote until lawmakers are able to hear more from both Ford and Kavanaugh. Sen. Lisa Murkowski, one of the closely watched moderates who is a pivotal swing vote, has said she thinks the committee might want to consider a delay of some kind. Sen. Susan Collins, another key moderate, has also said that both Kavanaugh and Ford should testify in front of Congress.

Professor Ford and Judge Kavanaugh should both testify under oath before the Judiciary Committee.

A spokesperson for Grassley says the Judiciary Committee is working on arranging calls with both Kavanaugh and Ford — though he notes that Democrats have not cooperated with these efforts. As indicated in their letter, Democrats don’t think the committee should do anything until the FBI has had a chance to fully review these allegations.

The FBI’s review would not be a criminal investigation but an additional component of Kavanaugh’s background check, which the agency is in charge of running. All recent Supreme Court nominees have been required to undergo a rigorous FBI background check, which includes reviews of everything from their past romantic relationships to their credit history. In the past, the FBI has flagged aspects of different federal nominees’ history. In certain cases, it has scuttled their nominations.

Democrats are pushing for the FBI to get involved because they don’t think the committee has the wherewithal or the objectivity to investigate these allegations on its own. Senate Minority Leader Chuck Schumer went so far as to say that Republican senators’ partisan handling of the Kavanaugh confirmation up until this point suggests that they aren’t capable of conducting an impartial review of Ford’s claims. The FBI said it had no additional guidance to provide at this time.

Senate Republicans ran a transparently partisan confirmation process and then immediately insinuated Prof Ford is being untruthful. They cannot impartially investigate these disturbing allegations. That must be done by the FBI, and the vote must be postponed until it is complete.

Both Kavanaugh and Ford have issued public statements about testifying.

Kavanaugh’s statement from the White House said, “I am willing to talk to the Senate Judiciary Committee in any way the Committee deems appropriate to refute this false allegation, from 36 years ago, and defend my integrity.”

Ford’s lawyer Katz told CBS This Morning on Monday, “My client will do whatever is necessary to make sure that the Senate Judiciary Committee has the full story and the full set of allegations to allow them to make a fully informed decision. She’s willing to do what she needs to do.”

As of yet, it’s unclear whether the committee will schedule a hearing for this testimony.

Republicans are rushing with the midterms in mind

Democrats have been accusing Republicans of rushing Kavanaugh’s confirmation process ever since it began — and many see the majority’s treatment of these sexual assault allegations as part of that effort. Republicans, meanwhile, argue that the focus on these allegations is simply another last-ditch political maneuver to try to delay a vote on Kavanaugh.

The speed with which Kavanaugh’s nomination has progressed is especially stunning given how long Republicans were willing to hold off on filling Antonin Scalia’s seat. Scalia’s seat remained empty for 422 days until Neil Gorsuch finally took it over last April. Kennedy vacated his seat less than two months ago.

So why the rush? Republicans are, in fact, under a time crunch. Senate Majority Leader Mitch McConnell has repeatedly said that he would like to push Kavanaugh’s nomination through by October 1, the kickoff of the Supreme Court’s fall term. The real date looming over his confirmation, however, is November 6 — the day of this year’s midterm elections.

Republicans are eager to make sure that Kavanaugh is confirmed before the midterms because there’s a slim possibility that control of the upper chamber could shift to the Democrats following the election. If Democrats do regain control of the Senate, they would have significantly more power in trying to stymie Kavanaugh and any other judicial picks that Trump sends down the pike. This doesn’t, of course, bar Republicans from approving Kavanaugh or any other Trump nominee in a lame-duck session in November or December.

Interestingly, these allegations have also taken the pressure off red-state Democrats up for reelection in 2018, like Heidi Heitkamp, Claire McCaskill, Joe Manchin, Jon Tester, and Joe Donnelly. While many of these lawmakers were at risk of significant constituent backlash if they didn’t vote for Kavanaugh, they can now cite these allegations as a valid and concerning reason that they are opting not to back him.

In their effort to seize control of the courts and remake the federal judiciary, Republicans are striving to push through both Kavanaugh and as many other nominees as possible before November.

Conservative commentator Erick Erickson put it this way: “The left is perfectly willing to destroy a man’s reputation in order to keep destroying children. They will use a 35 year old uncorroborated, single sourced, 35 year old claim of a woman who first made the accusation in 2012 after Kavanaugh’s name had circulated in the press as a possible Supreme Court pick for Romney in order to protect the right to kill girls in utero.”

In that case, it all comes down to pro–abortion rights Republicans Susan Collins and Lisa Murkowski. So far, they haven’t said they won’t vote for Kavanaugh.