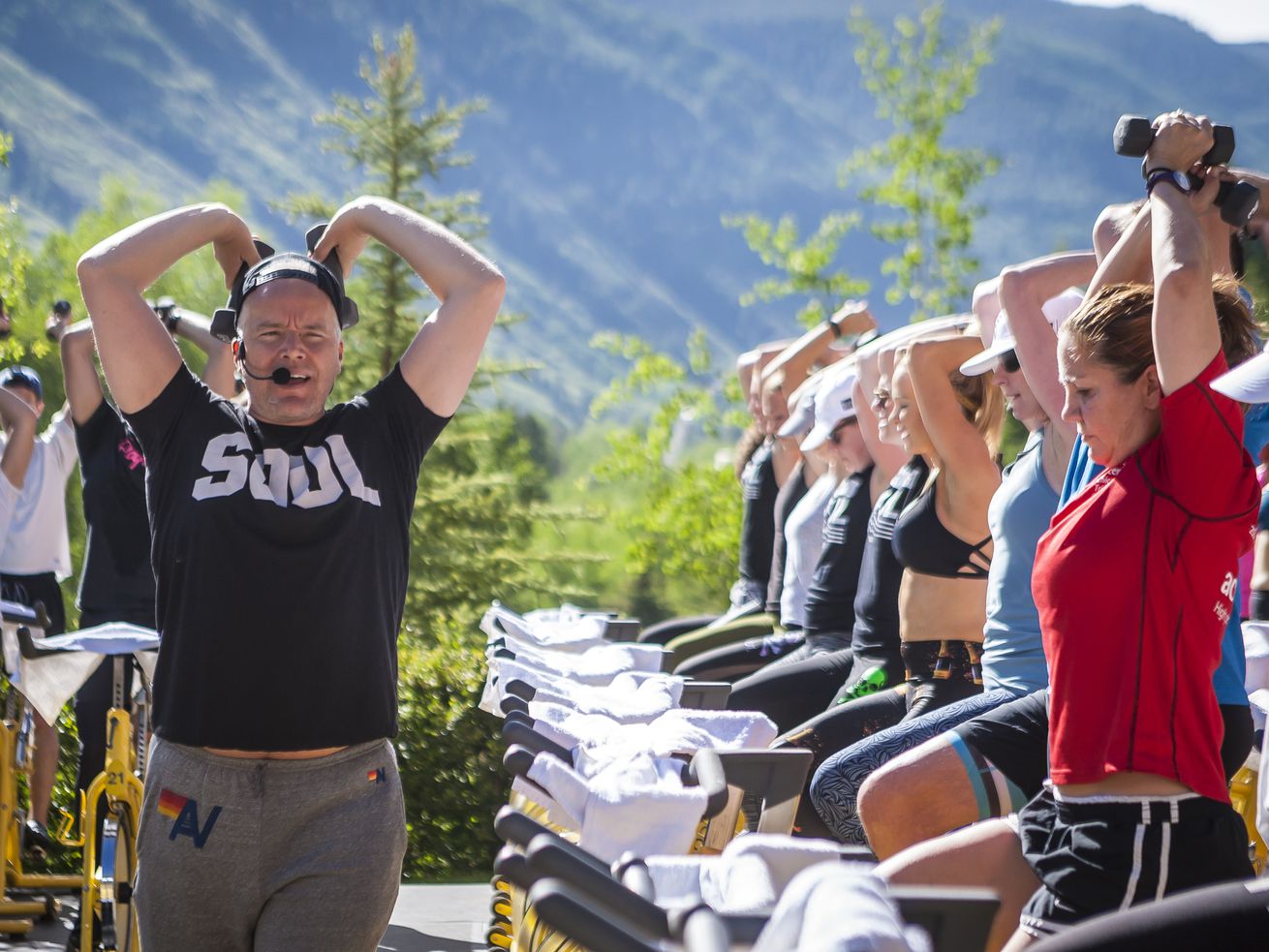 Wellness used to be aspirational. Now it’s a “responsibility.”

After Andy scoffs about what she considers frivolous fashion choices, Miranda informs Andy that the frumpy blue sweater she’s wearing isn’t simply blue, it’s cerulean. Furthermore, Miranda says, her wearing that sweater is the result of a long series of fashion decisions — from an Oscar de la Renta collection featuring cerulean, to that of lower-end designers, to “some tragic ‘casual corner’ where [Andy], no doubt, fished it out of some clearance bin.” High fashion, she implies, starts with luxury brands, then those trends work their way down to the mainstream.

The same process is happening with wellness.

Traditionally, the kind of luxury “wellness” product associated with lifestyle brands was a thoroughly high-end affair. There’s Gwyneth Paltrow’s Goop, with its $66 jade eggs (designed to be placed in the vagina, for dubious medical benefit). There’s SuperShe, a Finnish island resort devoted to wellness and women’s empowerment that runs $4,600 a week. Last year’s pop-up at Saks Fifth Avenue, The Wellery, was a high-end, 20-stall “wellness mall” where you could, among other things, pay $25 for a 10-minute slot to breathe in high-end Himalayan salts.

Now there’s WW, which was, until September, Weight Watchers. The affordable weight loss organization is in the process of rebranding itself as a wellness hub (the company says WW now stands for “wellness that works”). According to a press release, WW will now focus less on shedding pounds, and more on its “overall approach to health and wellbeing of inspiring powerful habits rooted in science.”

WW will keep some of the markers of the traditional Weight Watchers experience, including the points system, by which different foods “cost” a pre-determined amount of a consumer’s daily budget. But it’s also shifting its focus away from weight loss as a primary goal.

WW will partner with Headspace, the $250 million meditation app, to provide consumers with guided meditations in multiple languages to help transform their relationship with food and their body overall. It will offer dozens of themed Connect Groups, allowing customers to interact with one another socially. The rebranding of Weight Watchers into WW, and the company’s new focus on mental well-being is, in part, the reflection of the health and wellness industry’s increasing discomfort with the language of “dieting” and deprivation, as Taffy Brodesser-Akner wrote for the New York Times last year. But it also represents the democratization of the luxury-wellness aesthetic: mindfulness gone mainstream.

Wellness is now accessible, not aspirational

The most notable wellness brands on the market have always been aspirational, not necessarily accessible. The aesthetic of wellness is one that, in many ways, is defined by its opposition to mass-market identity. Farm-to-table restaurants, hand-crafted goods, bespoke immersive “experiences” — none of these things is easily scalable.

As the movement’s leading acolyte, Paltrow, told Brodesser-Akner in a different New York Times feature, “It’s crucial to me that we remain aspirational. … Our stuff is beautiful. The ingredients are beautiful. You can’t get that at a lower price point. You can’t make these things mass-market.”

The philosophical underpinnings of wellness culture — that we need to disconnect from our phones and laptop screens, that we need to eat seasonal and organic food grown within a three-block radius of our apartments, that we should fly to a remote Scandinavian island for a week to get in touch with our primal feminine identity — are incompatible with the kind of mechanization and reproduction that make products affordable.

It’s also not quite clear what, exactly, wellness is. The Global Wellness Institute includes a variety of experiences and products, from fitness classes to spa experiences to beauty supplies, within its wellness metric. But the concept itself is a nebulous one. It includes specific, physical transformations — getting better skin, getting more toned, losing weight — but is not synonymous with it. The rhetoric of wellness is as much about spiritual purification — you’re healing yourself of the innate toxicity of a hyper-connected, capitalist existence — as about any measurable physiological goals.

Still, the wellness behemoth continues to grow. According to the Institute, the wellness industry grew 11 percent between 2011 and 2013 to a $3.7 trillion market. The industry is expected to grow by another 17 percent by 2020. And, increasingly, wellness is becoming less aspirational than essential, as expected as free wifi in hotels. Brands that fail to find a way to sell their products as providing consumers wellness fall behind. Earlier this year, Kraft, Nestle, and Heinz — brands associated with unhealthy or at least health-neutral products — all cited the rise of the “health conscious” consumer as a major factor hindering company growth.

Likewise, consumers increasingly see wellness as a moral necessity, not an aspirational luxury. As Brigid Delaney, author of Wellmania: Misadventures in the Search for Wellness, told Vox, “Wellness was once the preserve of an elite. It was people who could afford $3,000 spiritual retreats, or $30 Barre classes or $150 Lululemon yoga pants. It was an aspirational ideal that that flashed past you as you scrolled through Instagram … but out of reach for most people who were too busy and/or too poor to spend the money on things that weren’t seen as necessities.”

She added: “The movement has trickled down to more affordable options — as wellness is seen as not just for the rich, but something you should do for yourself. Almost like a responsibility.”

As Beth McGroarty, a spokesperson for the Global Wellness Institute, told Vox that according to the Institute’s trends report: “There is a proliferation of lower-cost wellness products and services: from a new generation of affordable healthy grocery stores to low-cost spa chains. … We expect to see greater shifts from wellness as a luxury product to an attainable goal that’s packaged and sold by more affordable outlets.”

In other words, wellness is entering the economy class. Sometimes literally. Earlier this year, several airlines — including British Airways and Virgin Atlantic — partnered with Headspace in order to give passengers access to in-flight guided meditations, ostensibly to make the experience of traveling in economy a little less hellish. Wellness, in other words, is now being treated as a necessary corporate amenity, even for those passengers for whom $3,000 retreats or $30 barre classes would break the bank.

Within that paradigm, WW’s transformation makes perfect sense. Wellness culture is no longer about luxury or uniqueness. Rather, it’s about making perceived “lifestyle changes” accessible by promising to transform a consumer’s way of thinking from the inside of an app.

In a phone interview with Vox, WW’s Chief Science Officer, Gary Fisher, stressed the importance of mental transformation in overall wellness. WW’s partnership with Headspace, he said, is rooted in the fact that “half of the work of doing [a weight loss] journey” is mental. “We want to leverage the power of positive psychology,” he said. A WW customer can work in a guided meditation during a stressful commute, or a quick break in the workday.

In other words, you don’t need to fly to a $4,500-a-week Scandinavian island resort anymore to “get away” from the daily capitalist grind. The distinction, however illusory, between “work” and “wellness” has collapsed.

It’s possible to be cynical about WW’s rebranding. Erika Nicole Kendall said in an opinion piece for NBC News that the company’s press release was a “word salad with terrible fat-free dressing,” arguing that WW is just disguising its fundamental weight loss ethos with a feel-good, saleable veneer of wellness.

Of course, encouraging people to think about health as something broader and more nuanced than a number on a scale is by and large a good thing.

But WW’s transformation raises wider questions about what wellness, as a concept, really is — and why we want to buy it in the first place. A staggering percentage of diets fail. (Even Weight Watchers’ own internal studies, through which the company has a vested interest in being optimistic, suggest that people lose, on average, just 5 percent of their body weight in six months, and regain two-thirds of that within two years).

So, if diets don’t work, why do we do them? If Weight Watchers — and now WW — doesn’t actually help you lose weight, what exactly is the product people keep buying?

Brands sell identities as much as products

From Goop to WW, wellness has been as much about marketing emotions — the feeling of change — as it is about marketing actual physiological transformations. Put a jade egg in your vagina, or sign up for WW after a holiday-season binge, and you’re transforming not your body but how you feel about yourself. Aspirational and accessible brands alike offer a sense of identity — “I am the sort of person who is getting my life on track” — far more potent than a pound lost or a pore opened.

Critics like Kendall accuse WW, fairly, of being a weight-loss organization masquerading as a wellness brand. But it’s worth asking the reverse: To what extent was the original Weight Watchers a purveyor of feelings masquerading as a weight loss program? After all, if dieting doesn’t work, what exactly are you paying for?

Wellness may have morphed, culturally, from a luxury into a responsibility. And companies who sell that sense of responsibility also sell a sense of accomplishment. The idea that you are taking care of yourself, that your weight — even if it’s not where you want it to be — is something that you’re working on, is as integral to WW’s brand identity as its famous points system.

It’s telling that Delaney frames the democratization of wellness culture as the transformation of wellness from a dream into an obligation. WW’s new ethos, with its focus on the kind of meditations and wellness-centered activities you can do during a work break, or on a commute, reflects precisely that sense of obligation. Whereas a $4,500-a-week resort presents itself as an escape from work, a fantasy of purification, a $3-a-week app presents itself as something you should integrate into your daily life.

American culture has long been influenced by what has traditionally been called the Protestant work ethic: the idea that hard work, self-sacrifice, and moral purity are inextricable from one another. The increasing framing of wellness as a personal obligation, a necessity for both companies to provide and consumers to purchase, reflects that. The more accessible and affordable self-care becomes, the more it becomes an obligation. After all, it’s one thing to scroll past Instagram posts of $150 leggings you can’t afford without clicking. It’s another thing entirely to fail to make time to use a meditation app on your morning commute.

In this way, the inevitable “trickle-down” nature of wellness culture has transformed its moral character. The fantasy Goop sells is that of privilege and leisure — to be the sort of person who has the time (let alone the money) to indulge in lengthy experimental spa treatments, or buy one-of-a-kind hand-crafted objects.

Conversely, the identity WW is selling, is that of being someone in control of one’s own life. Someone who can do it all. Someone who is willing to put in the work to get physical and mental results. It’s a compelling emotion, particularly in our hyper-capitalist culture. And that feeling of being a person in control may well be worth $3 or $6 a week.

But WW’s new identity, like all brand identities, is more about the fantasy it conveys than about the results it provides. Maybe that’s okay.