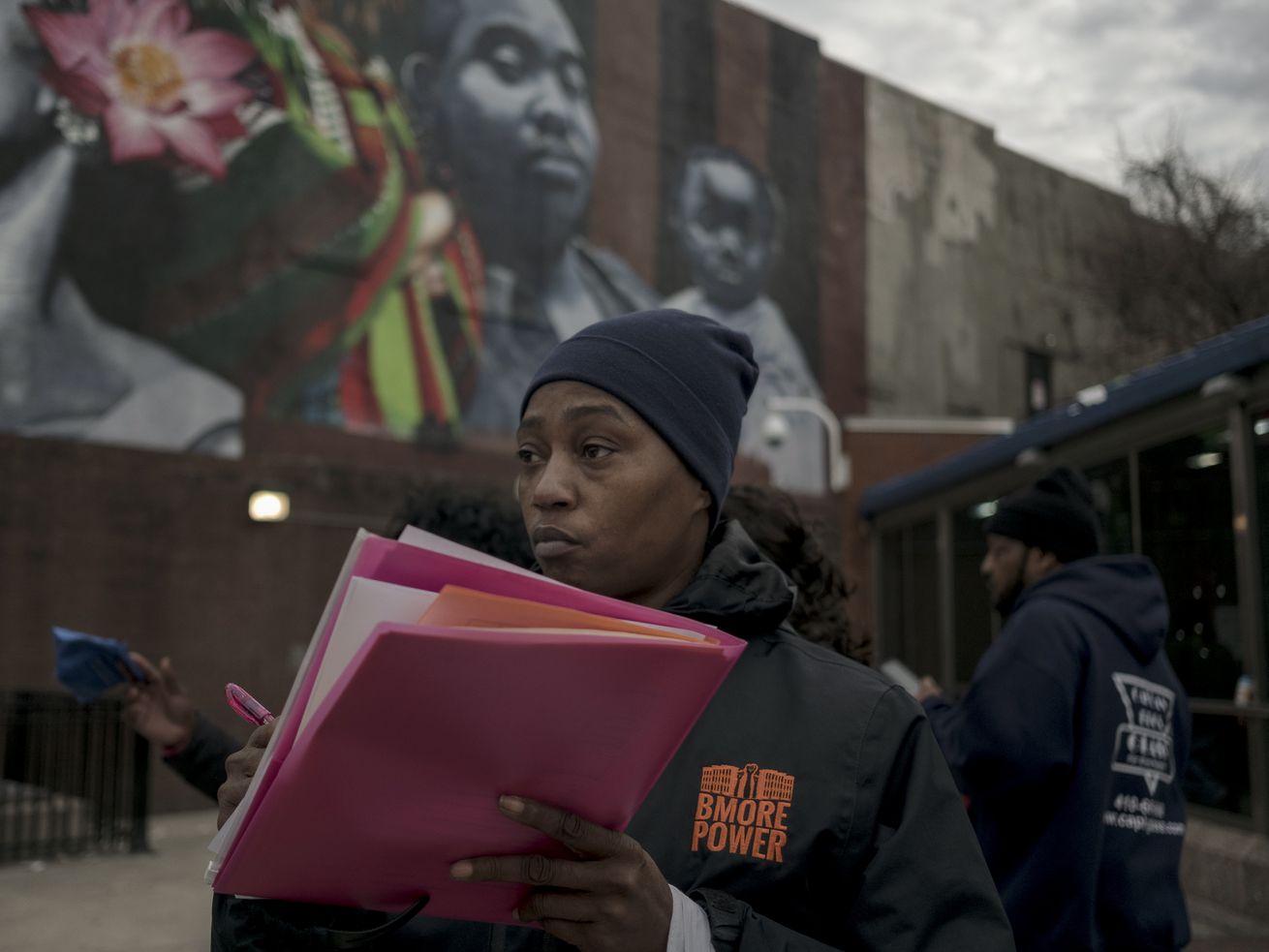 On the ground with the people fighting to help the city’s most vulnerable.

The white GMC truck, open four mornings a week and parked outside the city jail, is an attempt to close a gap in the city’s struggling addiction treatment system. But as the breakdown showed, even the attempts to plug holes in the system sometimes themselves have holes. With the van out of service, doctors and nurses took to their own cars to see patients, some of them already skeptical about getting treatment.

The cramped van, funded by private foundations and run by the Behavioral Health Leadership Institute, has a narrow hallway, a tiny kitchen, and two offices so small I could barely stretch my arms. It was back up and running by the time I visited, offering buprenorphine, one of the two medications considered the gold standard for opioid addiction treatment, to patients.

Since November 2017, clients have been able to walk in, unscheduled, and get started on treatment. The van doesn’t require ID — a big barrier, especially for people experiencing homelessness — or any kind of insurance. The main goal is to get someone into care, and then connect them to longer-term treatment in the more traditional health care system.

The van changed Michael Rice’s life. Without it, “I’d still be getting high,” Rice, 58, told me, laughing nervously. He said that after 15 years of using heroin — a $1,000-a-week habit, he said — he “got sick and tired of being sick and tired.” Since he came to the van a year ago, he’s been in recovery.

“This program works,” he said. “I feel good. I keep money in my pocket.” He pulled out dollar bills to prove it.

For Rice, treatment seemed inaccessible until he found the van. Treatment gaps exist all across the US. But Baltimore’s gaps have been amplified by huge economic and health care disparities, leaving treatment inaccessible to the city’s poor and, often, black residents — as overdose deaths climb to record highs.

“They need more of this,” Rice said, pointing to the van.

For the past two decades, the news media has generally focused on white victims of the opioid epidemic in suburban and rural areas, such as in West Virginia and New Hampshire. And it’s true that during the early years of the crisis, beginning with opioid painkillers, white people were the primary victims. But as the crisis has widened to involve illicit drugs like heroin and fentanyl, it’s hit black and urban communities harder and harder.

In that time, Baltimore’s drug overdose crisis has spiraled. According to the Centers for Disease Control and Prevention, the city’s overdose death rate was 22.7 per 100,000 people in 2011. It climbed to 49.1 per 100,000 in 2015 — comparable to the current figures in West Virginia, the state with the highest overdose death rate in the country. In 2017, the rate in Baltimore reached 85.2 per 100,000. That’s almost the equivalent of 0.1 percent of the city’s population dying from drug overdoses in one year.

Based on the most recent figures, 2018 was likely worse. Black people make up most of the overdose deaths in the city.

The Baltimore mayor’s office referred questions about the opioid epidemic to the city’s health department, which declined interview requests.

For Baltimore activists, the rising overdose death rate is proof that city, state, and federal officials aren’t doing enough to stem the opioid epidemic. “People aren’t all hands on deck to stop this,” said Natanya Robinowitz, executive director of Charm City Care Connection, which offers services to mitigate the dangers of drug use.

Beyond lack of access to treatment, the increase in overdose deaths can be blamed on the powerful synthetic opioid fentanyl supplanting heroin in the illicit market. Fentanyl can turn a more predictable dose of heroin deadlier by making it difficult or impossible to gauge the drug’s strength.

Baltimore has suffered decades of urban blight, poor governance, and crime and socioeconomic statistics that can rival developing countries. There are vast health disparities from neighborhood to neighborhood. The US Department of Justice concluded in 2016 that “[r]acially disparate impact is present at every stage of [the Baltimore Police Department]’s enforcement actions.” Gun violence is endemic; one recovery outreach worker I met had to move his work to another block because there was a shooting — an event that was treated as typical and unavoidable, like a storm that forced people indoors.

The city and state governments are taking some steps — like opening a stabilization center, where people in crisis can be directed for addiction treatment, and supplying organizations with the opioid overdose antidote naloxone (often known by a brand name, Narcan).

But Baltimore, already dealing with increases in murders and major policing scandals, and Maryland, focused on education, are limited in their resources. And the federal government, despite some increases here and there, hasn’t committed the level of funding that experts and advocates have called for nationwide to combat the opioid crisis.

The result: Treatment still isn’t accessible enough in Baltimore. People struggling with addiction often don’t have adequate health insurance, cash for out-of-pocket expenses, means of transportation, or even IDs needed to get into care. Treatment centers in Baltimore, due to either their own rules or government regulations, frequently tie specific requirements to their services — like invasive tests, group therapy, or arduous zero-tolerance rules. The city’s stabilization center, which is supposed to expand access to care, doesn’t even allow walk-ins.

That’s where the treatment van can help. It doesn’t require an appointment, an ID, or insurance. Clients who relapse aren’t kicked out of care, as happens in other settings, and are instead offered support to get through the backslide. There aren’t requirements for specific therapies; someone can pick up a prescription for buprenorphine and be on his way. Addiction experts call this kind of care “low-threshold” — patients don’t need to do much to get into treatment.

Right outside the van, I ran into Edward Kingwood, 56, smoking a cigarette. He said he was abused by his parents, so he ran away from home — in Fort Lauderdale, Florida — in 1978, and has been mostly homeless and jobless ever since. He started using heroin in 1986.

Kingwood, who’s been with the van program since January, had recently been in jail for an armed robbery. He complained that the city and state did little to connect him to social services: The jail didn’t provide him with treatment and released him without doing anything to address his homelessness or drug use, both of which contributed to his crime. When he got out, he went back to using heroin.

In the middle of the interview, Kingwood excused himself, dashing in front of the van and throwing up on the side of the street. It was withdrawal. “I’m sick,” Kingwood said, apologizing repeatedly, his downcast eyes watering. He squeezed a rubber ball in his left hand — a stress reliever, he explained.

That sickness is what drives many people to continue using heroin and other opioids. Withdrawal is commonly described as a mix of the worst stomach flu and crushing, crippling anxiety. To make it stop, people often go to whatever opioid they can find.

This is one reason medications like methadone and buprenorphine are so successful. As opioids themselves, they can be prescribed to people with opioid addiction to prevent full withdrawal. Once patients are stabilized on a dose, the medications don’t produce a high, and instead help someone feel normal — “get straight” — without resorting to dangerous drugs. Decades of research show the medications work, with studies finding they reduce the all-cause mortality rate among patients with opioid addiction by half or more and do a far better job of keeping people in treatment than non-medication approaches.

Still, stigma remains. One methadone patient in Baltimore, Ricky Morris, 52, told me his previous primary care doctor told him to get off the medication, arguing, “You’re killing yourself.” Despite the scientific evidence for the benefits of methadone and buprenorphine, there’s a widespread misconception that the medications, as opioids, are “substituting one drug with another” — even though the medications are, when taken as prescribed, simply much safer than heroin or fentanyl, and reduce cravings and withdrawal.

In response to rising overdose deaths in the 1990s, Maryland and Baltimore expanded access to methadone and buprenorphine treatment. That led to a drop in overdose deaths by the late 2000s, according to a study published in the American Journal of Public Health. But once fentanyl arrived in the mid-2010s, overdose deaths started to skyrocket again — and remaining gaps in treatment were exposed.

For Kingwood, the van is an opportunity to avoid withdrawal in the future — in a legal way. “I’m not fucking breaking the law anymore to get well,” he said.

He just wishes he had the opportunity earlier.

Barriers to treatment are a problem nationwide — one reason, the US surgeon general concluded in 2016, why only one in 10 people with a drug addiction get specialty treatment. Even in places that have received widespread national attention, like West Virginia and New Hampshire, people struggling with addiction can still face waiting periods of weeks or months for treatment.

But such barriers are especially acute in Baltimore, where historic disinvestment and segregation have led to high poverty rates and huge racial disparities in wealth, income, and education.

“We’re overlooked,” Darrell Hodge, a peer recovery specialist and former patient at the REACH treatment clinic in Baltimore, told me. “A lot of people in Baltimore feel deprived, like second-class citizens.”

There’s a common wisdom in Baltimore about why drug overdose deaths were allowed to dramatically increase in recent years with little outside attention.

“Racism always has a part in this thing,” Christian Diamond, a community wellness worker at Charm City Care Connection, told me. “We have been trying to tell people this is a disease for years, but no one was listening” — until the face of drug addiction became white and wealthier, he explained.

Keith Humphreys, a Stanford drug policy expert, acknowledged that racism is “no doubt” a factor in the lack of attention going to the opioid epidemic in Baltimore and other mostly black communities. But he pointed to the role of class, too: A meth epidemic in the early 2000s, which disproportionately hit poorer white communities across the US, received infrequent media attention and was usually framed as an issue of crime, not public health.

The opioid crisis has received a lot of attention nationally in part because it affects people who are white, affluent, and powerful — not just the black, poor, and downtrodden.

This is why former New Jersey Gov. Chris Christie could make a moving speech, which got more than 15 million views on Facebook, about his high school friend dying after years of struggling with addiction: It happened to someone he knew. That personal connection made the crisis more visible to people in power and pushed them to react with more sympathy — to their family, friends, and neighbors — in contrast to the punitive, criminal justice–oriented approach that dominated reactions to previous drug epidemics.

Bmore POWER is among the groups trying to fill the gaps in Baltimore. I tagged along with them in West Baltimore as they provided naloxone and fentanyl testing strips to people who use drugs.

Morris was stationed along Pennsylvania Avenue, near the CVS that was burned down during the Freddie Gray riots in 2015. Several police cars lingered nearby. But there didn’t seem to be any efforts to stop drug dealing; I saw money and goods exchange hands several times in the two hours I was there.

In fact, this is why Bmore POWER was here: The group hoped to catch people right before they used drugs, giving them tools and instructions to reduce the risk that they overdose and die.

“We hope people will see us as they’re copping shit,” Ro Johnson, with Bmore POWER, told me. She’s seen the harms of drug addiction personally, including with siblings and cousins.

As we spoke, a medical emergency across the street drew an ambulance and firetruck. Johnson said she wouldn’t be surprised if it was an overdose.

She added, “I just hope it ain’t my sister.”