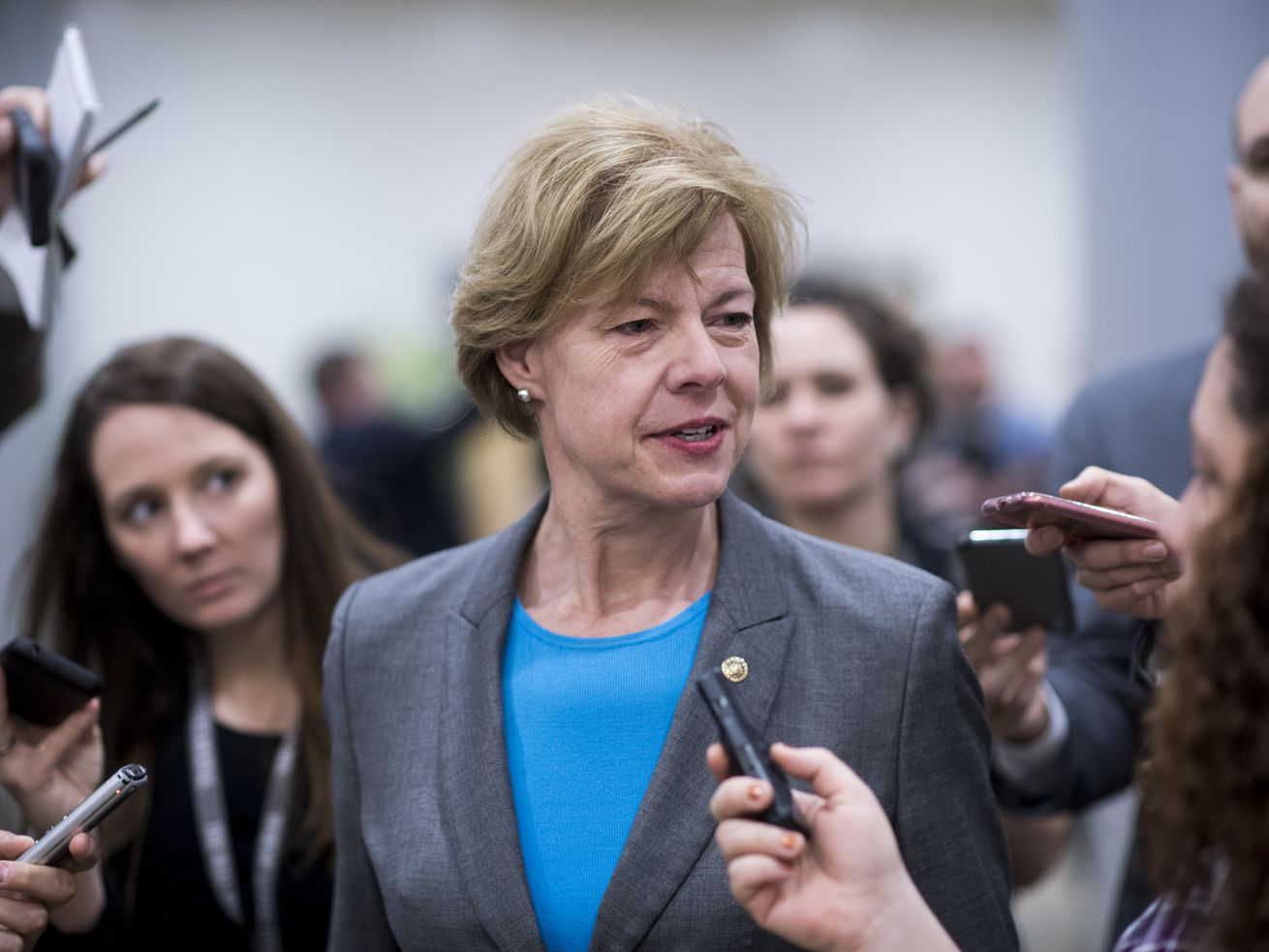 Tammy Baldwin is leading an effort to protect coverage for preexisting conditions ahead of the 2018 midterm elections.

Sen. Tammy Baldwin (D-WI) is leading the effort, introducing a resolution to unwind the Trump administration’s expansion of short-term insurance plans. Those plans are not subject to Obamacare’s rules for preexisting conditions or essential health benefits and Democrats dismiss them as “junk.”

“It is sabotage, in my mind, against the guarantees for preexisting conditions,” Baldwin told me and other reporters on Wednesday. “These policies aren’t worth the paper they’re written on.”

Baldwin is doing so under the purview of the Congressional Review Act, which gives Congress the ability to reverse federal regulations within a certain time window. The odds of Baldwin’s resolution bearing fruit are long: The House would have to pass the same resolution, and President Donald Trump would have to sign a measure unwinding his own administration’s agenda or there would need to be a veto-proof majority.

But the Senate Democratic offensive also gives the minority an opening to keep health care and preexisting conditions — Democrats’ core themes in the 2018 midterms — as live issues ahead of November.

Baldwin, who has had a preexisting condition since she was 9 and is facing a serious reelection fight of her own against Republican Leah Vukmir, says she has the 30 senators needed to force a vote under the Senate’s discharge petition rules. She is eyeing “some time in October,” she said, though there is no firm schedule.

Then, if Democrats do get the vote, they will need at least one Republican to join them and reach a majority to pass the resolution. It has happened before: Sen. Susan Collins (R-ME) voted with Democrats to overturn a new rule on net neutrality. Baldwin said she had spoken with Collins and Sen. Shelley Moore Capito (R-WV) in the last week and hopes to talk soon with Sen. Lisa Murkowski (R-AK), another moderate who voted against Obamacare repeal and has been mindful of preexisting conditions.

Baldwin must know she faces an uphill climb, but she’s pressing on, hoping to hold Republicans accountable for the promises they’ve made to protect preexisting conditions — promises Democrats believe have been undermined by the Trump regulations.

“I don’t think they’ve forgotten those conversations,” she told reporters.

The Trump administration is expanding what’s called short-term limited-duration insurance. These short-term policies typically have higher out-of-pocket costs and cover fewer services than traditional insurance. They were designed for people who, for example, expect to be out of work and therefore without insurance for a limited period of time.

That kind of coverage is totally free from the health care law’s insurance regulations: the mandate to cover essential health benefits, the prohibition on charging sick people more than healthy people or denying people coverage based on their medical history, and so on.

Short-term insurance had previously been allowed to last as long as 364 days. The Obama administration, in an effort to curtail the use of such coverage to circumvent the health care law, shortened it to three months in 2016. The Trump administration wants to reverse that rule, once again allowing people to buy this non-Obamacare coverage for almost an entire year.

Plans would be required, under the Trump administration’s regulations, to notify customers that the short-term coverage does not comply with some of the ACA’s central insurance protections. But administration officials dismissed the idea that this was a flaw, pointing instead to the issue of affordability.

HHS estimated that a short-term plan costs about $125 per month in late 2016 versus nearly $400 for an Obamacare plan before any federal tax credits were applied — though most customers on the ACA markets qualify for subsidies.

“This provides a much more affordable option for people in need,” Seema Verma, who leads the Centers for Medicare and Medicaid Services, told reporters earlier this year.

Many Democrats are making health care their top campaign issue

Baldwin is taking up health care as a signature issue in her reelection campaign, on the backs of Republicans’ failed attempts to repeal Obamacare and the Trump administration’s undermining of the law.

Wisconsin Republicans, led by Gov. Scott Walker, have refused to expand Medicaid, but the state has still seen its uninsured rate fall nearly in half under the Affordable Care Act.

“Her signature issue right now is health care. Every alternative that the Republicans are offering activates progressives, and the independents are like, ‘I’m not sure about this one, gang,’” Scot Rossa, a Wisconsin progressive activist, told me previously. “I think that is a feather in Sen. Baldwin’s cap.”

Baldwin’s opponent Vukmir, a Republican state legislator, has said she wants to repeal Obamacare — which would include the law’s preexisting conditions protections.

Baldwin is uniquely situated to talk about the health care debate: She endured a three-month hospital stay when she was 9 years old for a condition similar to spinal meningitis and has been labeled with a preexisting condition ever since.

But she isn’t in the only Democrat with a laser-like focus on preexisting conditions. Democrats in many difficult reelection races are running on Obamacare’s core protections. Sens. Heidi Heitkamp (D-ND) and Joe Manchin (D-WV) both recently went up on the air with ads boasting about their support for people with preexisting conditions and slamming their Republican opponents for failing to adequately protect them.

In Indiana, Donnelly — maybe the single-most vulnerable Democrat this cycle — called the preexisting conditions rules “one of the best parts of the Affordable Care Act” in his own digital video, and chided his Republican opponent, Mike Braun, for claiming that he supports them too.

2018 will be the inverse of the past two midterm cycles: Democrats are relying on Obamacare to carry them in tough races rather than Republicans exploiting it to bring them down.

Health care is among voters’ top issues this year, and they trust the Democrats more than Republicans. Obamacare’s preexisting conditions protections are very popular with and particularly important for women, a fact further highlighted by a Heitkamp ad that spotlights two women.

You won’t find this message in just North Dakota either. Democrats are spending more money on ads for health care, according to the Cook Political Report, than any other issue.