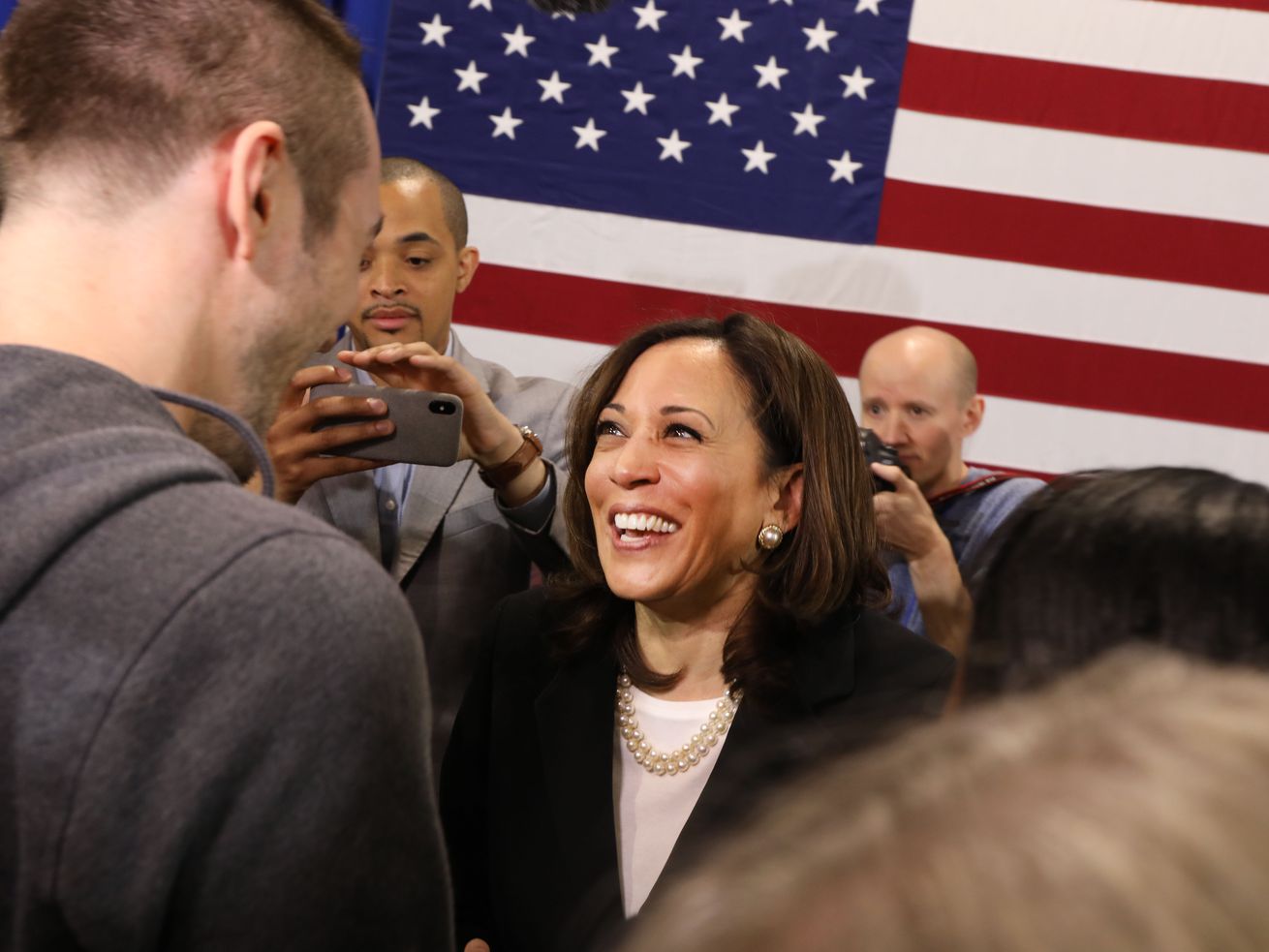 Candidates are flocking to the state’s Democratic convention this weekend in the hope of making inroads for its many prized voters.

This weekend, 14 presidential hopefuls are descending on California for state Democrats’ annual convention, marking the biggest gathering of candidates thus far this cycle.

There’s a reason so many are flocking to the Golden State: A longtime liberal stronghold, California is poised to play a unique role in the 2020 race, ever since it shifted up its primary from the first week of June to March 3. With the primary now taking place on so-called Super Tuesday, California’s nearly 500 delegates could hold much more sway over which nominees emerge as strong contenders early on.

That’s a big reason state officials pushed for this change in the first place: Previously, when its primary took place in June, California voters would often be among the last to go to the polls, sometimes doing so after the outcome of the Democratic nomination had effectively been decided. By moving its primary date — something any state has the power to do — California lawmakers have made the state a crucial stomping ground for Democrats seeking to establish an edge.

“Candidates will not be able to ignore the largest, most diverse state in the nation as they seek our country’s highest office,” California Secretary of State Alex Padilla said in a statement regarding this change. In the coming days, Sens. Kamala Harris, Bernie Sanders, Elizabeth Warren, and South Bend Mayor Pete Buttigieg are among those who’ll be stopping by the state, though former Vice President Joe Biden conspicuously will not.

Padilla noted that the calendar shift also means candidates will need to highlight issues that are prioritized by California voters, an electorate that’s significantly more diverse than places like New Hampshire and Iowa.

Because of some quirks in the state’s electoral process, however, it’s not a given that the California primary will decisively pick a nominee. Specifically, the way delegates are divided in the state could mean that no candidate emerges as a runaway winner. What is certain, though, is that several top-tier candidates are clearly determined to give the state their best shot.

California is an expensive place to compete, and Harris, Sanders, and Biden are seen as having the advantage

Given its size and expansive media market, California is a notoriously expensive state to compete in. Unlike some other early states, outreach in the nation’s most populous state is extremely dependent on paid media, and according to some strategists, candidates will need at least $5 million to even be competitive.

This landscape is one that favors candidates that constituents already know, experts say, giving home state Sen. Kamala Harris a big leg up, along with former Vice President Joe Biden and Sen. Bernie Sanders, both of whom have prominent national profiles.

“If she can do well in the February contests, [Harris’s] home state could be part of a potential knockout blow to the others,” Kyle Kondik, the managing editor of Sabato’s Crystal Ball at the University of Virginia, told Vox. “More broadly, it may be that the best-known candidates — such as Biden or Sanders — benefit because they have built-in name identification, potentially a big advantage in a state with lots of expensive media markets.”

One risk that may be unique to Harris in the state is the high expectation for a decisive victory, given her California ties. At this point, the Oakland native has racked up a slew of endorsements in the state including everyone from Gov. Gavin Newsom to Rep. Barbara Lee. If she falters in California, that could hurt her candidacy significantly.

“It may be that anything short of a victory there will seem like a disappointment. Fairly or unfairly, these primaries can be about expectations,” Kondik previously told Vox.

And Harris won’t just be competing against Biden and Sanders for the state’s trove of delegates. Other candidates who have delivered strong fundraising hauls and can translate that to effective campaign outreach could also fare well in the state, especially given how many delegates are up for grabs.

One other interesting dynamic in California is that candidates’ ability to connect with voters of different demographic bases could be a crucial strength due to how district lines are drawn, says Paul Mitchell, a vice president at Political Data, a voter data and software firm based in the state.

“In one district you might have a large Asian population (maybe Yang gets a leg up there) or another set will have heavy African American populations (look for Booker and Harris to compete better) and there are a bunch of heavily Latino districts (advantage Castro or Beto, who is talking a lot about Latino issues),” he says. As one of the most diverse states in the US, California’s likely voters are 59 percent white, 21 percent Latino, 11 percent Asian American and 6 percent African American.

Although the California primary was moved up to give the state a larger say in the final outcome of the Democratic nomination, it’s likely its voters will still take strong cues from the outcomes of the early four primaries and caucuses in Iowa, New Hampshire, South Carolina, and Nevada.

“There is a ripple effect from the early primaries, typically — those who do not do well early may fall by the wayside by Super Tuesday,” says Kondik. “Even Harris, the home state candidate, probably would have a hard time in California if she hasn’t done well earlier in the calendar.”

This dynamic means that candidates will have to perform strongly and place in the “top two or three” in at least two of the early states in order to establish themselves, says UC Berkeley political science professor Eric Schickler.

“Past experience suggests that a candidate needs to do well in at least some of the early states to have the visibility necessary to do well in a state like California, even this early in the process,” he says. “Otherwise, the risk is you are not seen as relevant.”

And while California’s early voting set-up, which begins right around the Iowa caucus, could mean that some candidates pick up votes before the results even come in from the first four races, that backing isn’t expected to be enough to give any person who otherwise flounders enough support to get a solid win.

“A January polling leader who stumbles in February may have ended up banking some votes in California,” says Kondik, calling the state’s early voting arrangement a “strange dynamic.”

Most of California’s early voters, however, will still be voting after the very first states have done so, says Schickler.

Early voting isn’t the only quirk of the California primary. Another interesting twist in the way the state doles out votes could mean that no single candidate walks away with the lion’s share of the delegates.

Much like many other Democratic primary states, California is not a “winner-take-all” system, so several candidates could theoretically each get a fraction of the 495 delegates.

“The impact on whether [the California primary] helps settle the race early is unpredictable,” says Schickler. “Since delegates are allocated relatively proportionally, it is possible that the winner will not receive all that many delegates — if, for example, there are still four or five serious candidates in the race.”

If the California vote does wind up splitting in a way where there’s no clear winner, it could be a portent for a much longer, drawn-out race depending on the results in other Super Tuesday states like Texas, North Carolina, and Virginia.

“If California is an isolated multi-way split, then the impact is likely minimal. However, if that multi-way split is replicated across the map on Super Tuesday, then it could signal a protracted race,” says Josh Putnam, a political science professor at the University of North Carolina-Wilmington.

There is, however, the possibility that a clear leader emerges, especially if one person is able to rake in a majority of the votes. If a candidate was already performing strongly and did well in California, that could give their campaign a key advantage.

“While we aren’t a winner-take-all state, we are in a winner-take-most and I would expect whoever does best in California is going to come away with a huge and decisive haul of delegates,” says Mitchell.

Historic trends suggest that California is more likely to help solidify various candidates’ frontrunner statuses than fuel a drawn out primary fight, though there are, of course, no guarantees. By “front-loading” the overall calendar, California is making it so a larger proportion of the delegates are available sooner in the race. That’s helped cull the field more quickly in the past, says Putnam.

“Typically, the most front-loaded calendars — 2000 and 2008, for example — winnowed the field down pretty quickly,” he said. “In no cycle has a very front-loaded calendar led to a multi-way split that persisted for very long. That is different than saying it cannot happen.”

In addition to the impact it could have on the primary outcome, the change in the California schedule could have a significant effect on the issues that candidates choose to prioritize, and the way they frame their messaging.

“If candidates want a strong showing in [Texas and California] they need to have a strong plan for outreach to Latinos, blacks, and Asian Americans,” says Matt Barreto, a co-founder of polling and research firm Latino Decisions. “A majority of the Democratic voters [in these states] are non-white, and so candidates need to be investing in outreach, engagement and policy solutions that speak to communities of color specifically. A generic rising tide lifts all boats is not going to cut it.”

Compared to several other early primary states, California is both more progressive and more diverse, forcing candidates to address an electorate that differs significantly from the predominately white voter bases of New Hampshire and Iowa.

Candidate visits this weekend, which are set to feature several campaign fundraisers, an appearance at a forum hosted by progressive activist group MoveOn, and speeches at the Democratic Convention, could offer a glimpse of just how heated the fight for the Golden State is going to get.