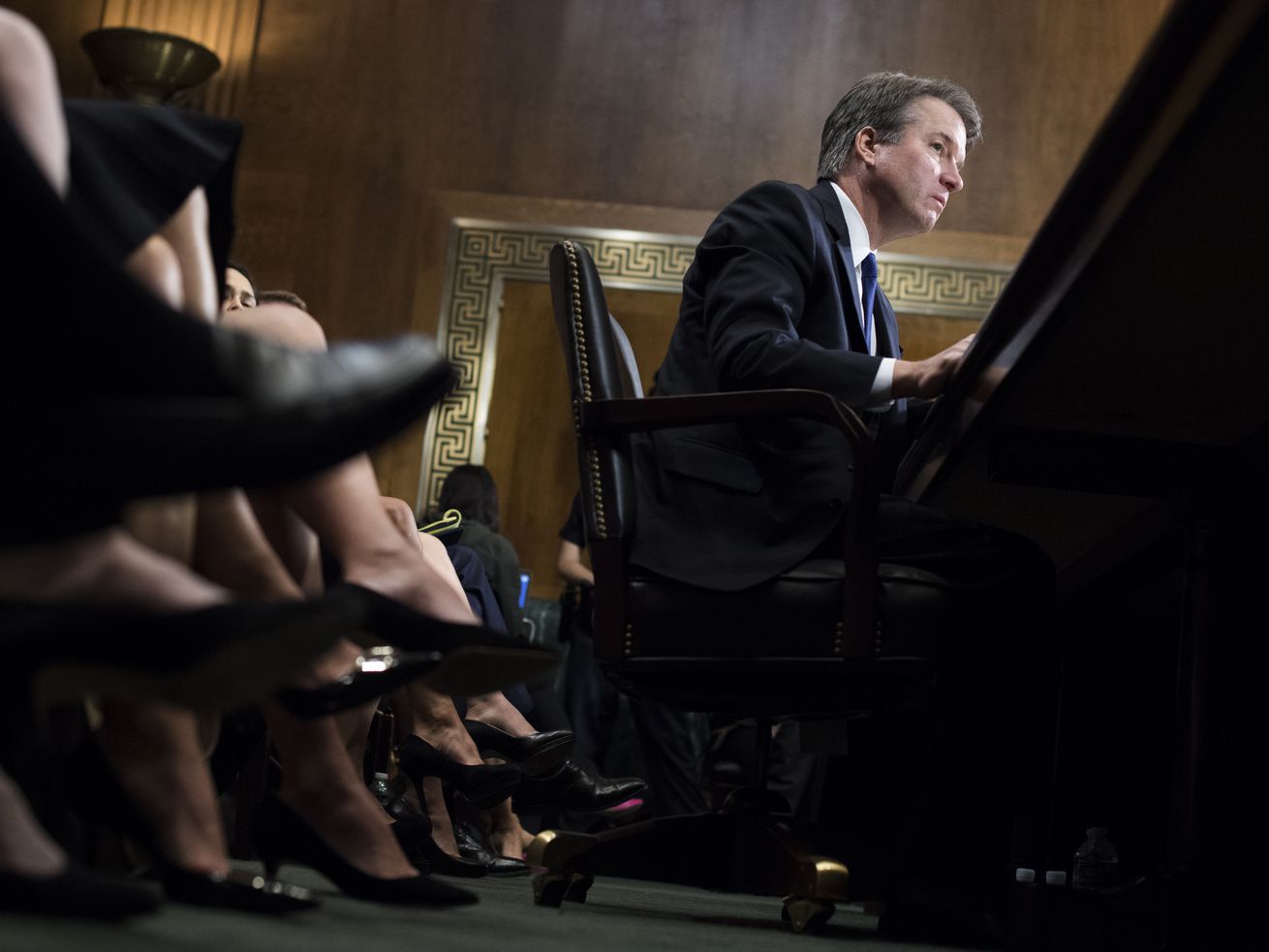 Could both Brett Kavanaugh and Christine Blasey Ford be telling the truth? Some on the right think so.

Mainstream conservatives have been left with an unfortunate quandary in the wake of last Thursday’s congressional testimony from Christine Blasey Ford on allegations that Supreme Court nominee Brett Kavanaugh had sexually assaulted her in high school.

On the one hand, they want to stand beside a Supreme Court nominee many Republicans believe has been fully vetted and proven more than qualified for the role, and who has strenuously denied the allegations against him.

But on the other hand, they, and millions of Americans across the country, watched Ford’s testimony on Thursday and found her “compelling and credible.” Even President Trump said of Ford: “I thought her testimony was very compelling and she looks like a very fine woman to me,” adding that she seemed like a “credible witness.”

TRUMP: “I thought her testimony was very compelling and she looks like a very fine woman to me…Brett’s testimony likewise was really something that I haven’t seen before – it was incredible.” https://t.co/rORfGxAuTE pic.twitter.com/TiPH7l1sqq

In response, many on the right have attempted to hedge on Ford’s allegations: Something did happen to Ford back in July 1982, but it wasn’t Kavanaugh. Rather, a third party, even a Kavanaugh “doppelgänger,” was responsible. Ford testified she was “100 percent” certain Kavanaugh that was her attacker, but that hasn’t stopped some on the right from saying she might be mistaken.

As Richard Land, an evangelical leader and member of President Trump’s faith advisory board, put it in a statement on Friday, “I believe that something very traumatic happened to Dr. Christine Ford, but I also believe that in the absence of any corroborating witnesses, the preponderance of the evidence shows it was not Judge Kavanaugh who was the perpetrator.”

Or as Trump put it during a Republican fundraiser, “Something clearly happened to this woman, but it wasn’t Brett.”

As the Senate Judiciary Committee takes a week to allow for an FBI investigation into what took place back in 1982, the theory of a third party — someone really responsible for Ford’s alleged assault, or even just someone who knows what happened — is continuing to percolate among conservatives.

As I wrote two weeks ago:

On September 17, Sen. Orrin Hatch (R-UT) said Dr. Ford must be “mixed up” and “mistaken” about the identity of the person who allegedly assaulted her. The Wall Street Journal editorial board made the same assertion on Monday. The Washington Post published a piece on Tuesday by opinion columnist Kathleen Parker arguing a similar line of reasoning, saying, “In a case without evidence, witnesses or corroboration, mistaken identity would provide a welcome resolution to this terrible riddle.”

Even Kavanaugh seemed to argue that Ford’s allegations were merely a case of a misidentification, reportedly telling Hatch that “Dr. Ford, who acknowledged to the Washington Post that she did not remember some key details of the incident, may be mistaking him for someone else.”

But the theory lost its footing when conservative activist Ed Whelan set the right-wing world on fire with a theory that named a third party — a classmate of Kavanaugh’s whom Whelan described as looking similar to Kavanaugh — as the real culprit in Ford’s alleged sexual assault. He posted a lengthy Twitter thread that included a map of homes surrounding the Columbia Country Club (near where both Ford and Kavanaugh attended high school) and floor maps available on the real estate website Zillow.

Though Whelan apologized and deleted the thread (and has since taken a leave of absence from his post as president of the Ethics & Public Policy Center), the backlash to Whelan’s theorizing was harsh, especially since the theory wasn’t entirely of his own making. As Politico reported earlier last week, he had help from the prominent public relations firm CRC Public Relations, which helped him craft his theory and promoted it widely, including among White House staff.

And now Whelan’s tweetstorm has come to encompass not only him but also members of the Senate who subscribe to the theory that “something” happened to Dr. Ford back in 1982 but that Kavanaugh wasn’t responsible.

Sen. Kennedy of Louisiana says he believes something very very bad happened to Dr. Ford and he’s sorry, but he says he does not believe Brett Kavanaugh was involved and will vote yes. Another Whelanite.

It’s worth noting that this is the theory percolating among mainstream conservatives. On the further-right corners of the internet, many are simply articulating that Ford is a Democratic Party operative who is lying to take down Kavanaugh (or, in one instance, that she may have hypnotized herself), or they are saying that, sure, Kavanaugh probably did it, but it’s simply not that big of a deal if he did.

“I don’t know exactly what to believe”

But the doppelgänger theory is getting traction again. Earlier on Friday, Ross Douthat, a prominent conservative thinker and opinion writer at the New York Times, argued on Twitter that to get to the truth of what happened to Ford back in 1982, it was time to take another look at the “third party” theory, arguing that Chris Garrett, who was called “Squi” on the 1982 summer calendar Kavanaugh submitted to the Senate Judiciary Committee as evidence that he wasn’t at the party Ford described, should be questioned.

Garrett, the man who Whelan claimed may have been responsible for Ford’s alleged assault in his tweetstorm, has denied the theory, but Douthat wrote that he still may have pertinent information, saying, “The fact that he was recklessly named as a suspect by Ed Whelan doesn’t change his possible importance as a witness.”

I think the takeaway from this @byronyork thread is the same one I offered in my column today. Any real effort to get closer to the truth would ask for recollections from Chris “Squi” Garrett:https://t.co/MWsrbcQBM9

He supposedly introduced Ford and Kavanaugh. He dated Ford. He lived in the area. He partied with Judge, Kavanaugh + Smyth on at least one weeknight that summer. The fact that he was recklessly named as a suspect by Ed Whelan doesn’t change his possible importance as a witness.

And the fact that he apparently wrote to Leahy (missed this somehow yesterday) is all the more reason to hear what he has to say:https://t.co/2pnpIbY8u4

I reached out to Douthat, who wrote two weeks ago that if Kavanaugh is telling the truth, “Either Ford is a brazen liar, or some scenario of clouded or mistaken memory must be true.” When Whelan shared his tweetstorm, Douthat tweeted that he assumed there was “more reason” to believe the doppelgänger theory than what Whelan shared. And on Friday, Douthat again wrote about the theory of Ford perhaps mistaking her attacker for Kavanaugh, and referenced Garrett:

Then there is the other Georgetown Prep boy who supposedly introduced Kavanaugh to Blasey — a boy she dated and, she reluctantly revealed, also the boy recklessly named by Whelan. Isn’t it possible, since she remembers him connecting them, that the party could have been at his house — that he could be the extra person at the party whose identity she can’t remember? Isn’t it at the very least possible, since he was the link between them, that he could confirm or deny some useful detail about her link or lack thereof to Kavanaugh?…I am more convinced than ever that somebody knows something that could prevent this from metastasizing into our era’s Dreyfus Affair — a source of unresolved hatreds for years and decades yet to come.

Douthat told me that speaking only for himself, “I don’t know exactly what to believe … but while believing that it’s very unlikely that she has fabricated this story, I also think that the inability to get any corroborating evidence given the number of people supposedly at the party is troubling and that from what I know of the science here, the possibility of a false memory has always been a little more likely than the liberals dismissing it seem to believe.”

He added that, again, he thinks somebody knows something. “I strongly suspect, as I said in my column [on Friday], that somebody who lived in Northwest DC back then knows or at least half-remembers something that would help us get more clarity.”

But Douthat told me that Ed Whelan’s tweetstorm made it more difficult for him and others to get the real answers, saying, “I think Whelan poisoned the well for a totally reasonable line of inquiry.”

But the search for a third party who might know what really happened back in July 1982 is not just a demand for evidence but a call for a third path, and a way for two credible-seeming people to both be telling the truth. The bottom line is that rather than being a dramatic victory for one side over the other, Thursday’s hearings largely left many Americans right back where they started: with two people, an allegation of sexual misconduct, and no clear way forward.

It’s worth noting that Ford has shot down the idea that she may have mistaken the identity of her alleged attacker, saying that she knew both Kavanaugh and Garrett and that “There is zero chance that I would confuse them” in comments to the Washington Post. Plus, again, she testified that she was “100% sure” Kavanaugh was her assailant.

And make no mistake, many on the right, from pundits to members of Congress, did find Dr. Ford believable. As Kyle Smith wrote for National Review on Friday:

Her statement was credible. Her emotion was heartbreaking. With her girlish voice and her slightly unkempt hair, she seemed like the opposite of a hardened, professional political operative or even a dour, pedantic academic. Her reluctance to speak was easily explained by her apparent nervousness at what might happen to her should she go public. She even flashed a dazzling smile.

But they also believe Kavanaugh, and argue, as David French did for National Review, that he “voiced the emotion of honorable conservatives across the nation” during his testimony:

This was the moment when a member of the “establishment,” the person who is supposed to sit quietly, respond mildly, and understand the pain of their opponents without voicing their own anguish, to absorb anger without showing anger, finally said “enough.”

Thus, a third party being present that night back in 1982 would solve many problems for conservatives. It would exculpate Kavanaugh and allow him to serve on the Supreme Court without the baggage of sexual assault allegations, and would allow Ford to have some measure of closure without denying the gravity of what she says happened to her.