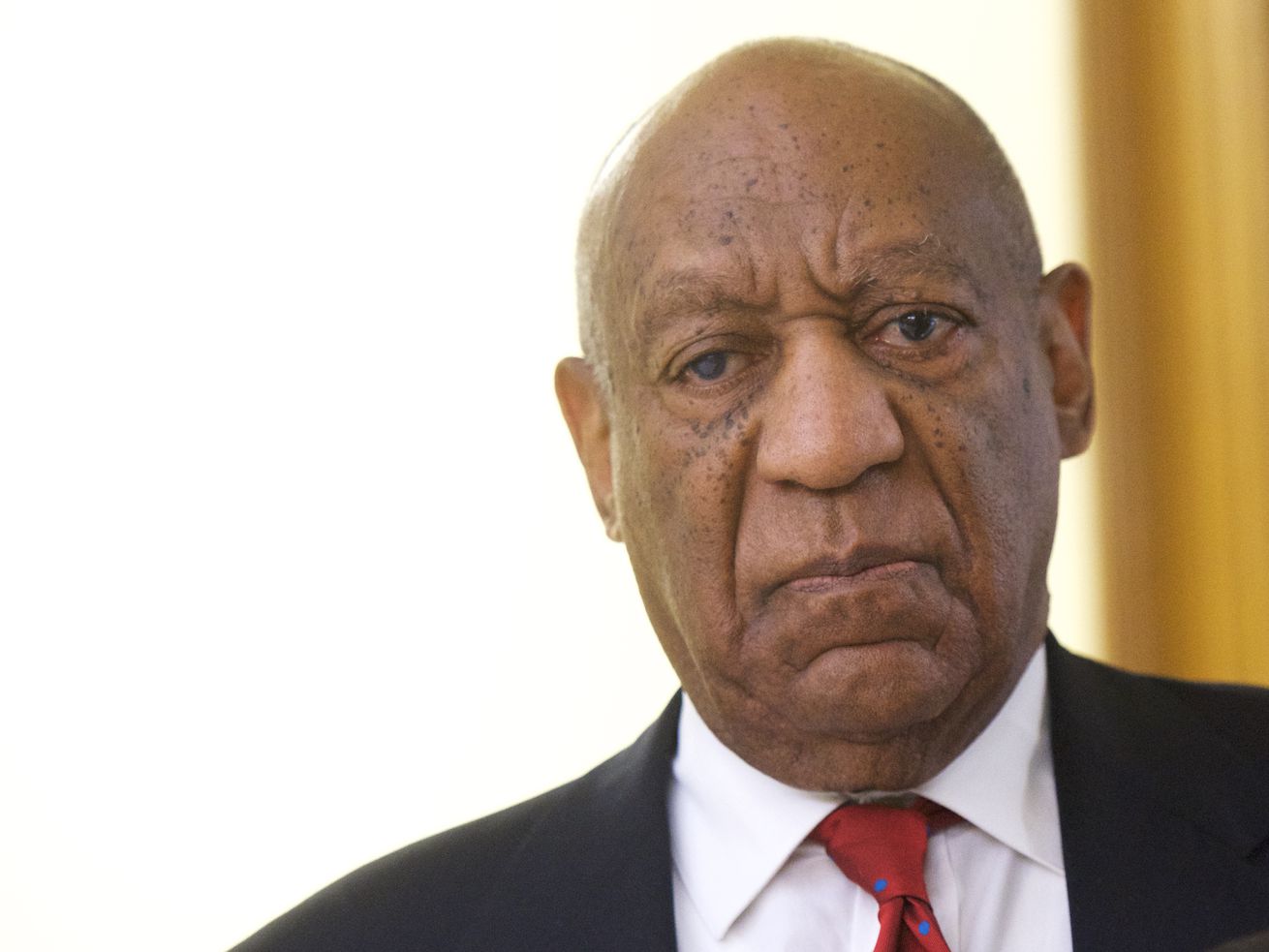 Years before being sentenced to prison for sexual assault, Cosby presented himself as a moral leader for black America.

The April conviction of Bill Cosby fueled a wave of assessments about the comedian’s tarnished legacy — and how that legacy was long wielded as a cudgel against poor black Americans. With the news that he will be classified as a “sexually violent predator” and will immediately begin serving three to 10 years in prison for sexual assault, that conversation continues to remain relevant.

The sentence, announced after a two-day hearing, comes months after Cosby was convicted on three counts of aggravated indecent assault for drugging and sexually assaulting Andrea Constand, a former employee of Temple University, in 2004. During the trial earlier this year, five other women shared their stories of experiences with Cosby, a portion of the roughly 60 women who have accused Cosby of drugging and assaulting them over the course of his five-decade career.

Cosby, meanwhile, has remained silent, declining to testify during the trial, speak about the allegations, or show any remorse for his behavior. At his sentencing, he declined another chance to speak. His legal team is working to appeal the sentence.

Cosby’s April retrial and recent sentencing unfolded as the #MeToo movement continued to call attention to high-profile men abusing their power against women, sparked a fierce debate about race, gender, and consent. In its earliest stages, debates over Cosby’s supposed innocence were largely shaped by the actor’s longstanding image as “America’s Dad,” the Cosby Show patriarch who hawked pudding pops, hosted Kids Say the Darndest Things, and preached a message of upward mobility and success that transcended racial lines.

In the years after the Cosby Show, his legacy took on an additional dimension as Cosby’s message of success morphed into a more pointed critique against black America’s moral failings, with Cosby touring the country to “call out” the black community for focusing so much on discrimination and racism, chiding poor black people for their status in society, and arguing that personal responsibility was the key to success.

That this message, framed as offering “tough love” and initially delivered in 2004 (the same year as Constand’s assault), could be given by a man accused of assaulting dozens of women over the course of decades reeks of hypocrisy. But as Jenée Desmond-Harris wrote for Vox in 2015, Cosby’s persona and his actions are not necessarily incompatible. “It’s easy to imagine that they could have their origins in the same self-important, controlling place,” Desmond-Harris explained. “A place where a powerful, widely adored man steamrolls anything that stands between him and what he wants.”

As Cosby’s refusal to acknowledge his actions has shown, this need for control has not translated into how he views his own behaviors. Cosby has long demanded that other people take personal responsibility for their actions. But he has yet to make any indication that he is interested in doing the same.

In the mid-2000s, Cosby publicly underwent a transformation from the Heathcliff Huxtable character known and loved in the 1980s and ’90s into a tough-talking figure who saw himself as the only voice standing between black America and complete ruin.

During a 2004 NAACP event commemorating the anniversary of the Brown v. Board of Education ruling, Cosby unleashed the “Pound Cake” speech, an address littered with inaccuracies, stereotypes, and downright false information aimed at criticizing black youth for a number of supposed offenses ranging from their clothes to their speech and even their names.

The speech was named for Cosby’s assertion that those protesting police violence over petty crimes — like stealing a piece of pound cake — would be better served by examining the problems within the black community.

“People getting shot in the back of the head over a piece of pound cake!” Cosby said. “Then we all run out and are outraged, ‘The cops shouldn’t have shot him.’ What the hell was he doing with the pound cake in his hand?“

Cosby argued that a segment of black people were “fighting hard to be ignorant.” He had harsh words for unwed black women, who he said were “having children by five, six different men,” as well as black men who “have pistols and they shoot and they do stupid things.”

Cosby would later evolve the speech into a national tour where he stood before black audiences and demanded that they improve. In 2007, the ideas served as the core of Come on, People, a book that hoped to put black people “on the path from victims to victors.”

The same year that Cosby admonished people for stealing pound cake and kick-started his crusade for personal responsibility, Constand says he drugged and assaulted her at his home in Pennsylvania. Her allegations attracted some media attention but were largely ignored, as were the allegations of other women who had shared stories of incidents with Cosby.

When confronted with his own behavior, Cosby has yet to take accountability

By 2014, with Cosby’s “call-out” tour long over, critics turned to the sexual assault allegations, arguing that Cosby’s image as a savior was built on hypocrisy.

“Bill Cosby has the fuckin’ smuggest old black man persona that I hate,” comedian Hannibal Buress told a Philadelphia audience in October 2014. “He gets on TV, ‘Pull your pants up black people, I was on TV in the ’80s! I can talk down to you because I had a successful sitcom!’ Yeah, but you rape women, Bill Cosby, so turn the crazy down a couple notches.”

Cosby’s efforts to position himself as a moral authority also prompted US District Judge Eduardo Robreno to unseal a 2005 deposition in which Cosby admitted to giving women quaaludes before having sex. Robreno argued that Cosby’s prior moralizing played a direct role in his decision to unseal the lawsuit, which Constand had filed.

“The stark contrast between Bill Cosby, the public moralist and Bill Cosby, the subject of serious allegations concerning improper (and perhaps criminal) conduct is a matter as to which the [Associated Press] — and by extension the public — has a significant interest,” Robreno wrote in 2015.

Shortly after Cosby was convicted, a juror told Good Morning America that the deposition played a crucial role in the guilty verdict. “If it hadn’t been for his decision to scold poor black Americans for their moral failures while decades of sexual-assault allegations had remained hidden, it’s possible that none of Cosby’s victims would have gotten their day in court,” Adam Serwer wrote at the Atlantic earlier this year.

But even with his own words corroborating stories women have been sharing for years, Cosby has still sought to deflect. During his April trial, Cosby’s lawyers sought to paint Constand as a gold digger and “con artist,” noting that she had previously been paid a settlement.

And Cosby’s supporters placed a special focus on race, arguing that the women accusing him were out to ruin the legacy of an elder statesman of black America, claiming that the trial amounted to a “public lynching.” His legal team likened the #MeToo movement to “witch hunts, lynchings, [and] McCarthyism,” while the five women who provided additional testimony were painted as promiscuous.

The deflections did not end with Cosby’s conviction. Shortly after the verdict came down, Cosby’s spokesperson and publicist appeared on Good Morning America and invoked Emmett Till, a black teenager brutally murdered in 1955 after a white woman accused him of whistling at her, as an example of how Cosby’s accusers, many of them white, were exploiting hysteria about black men. The black women who also accused Cosby of assault were largely ignored or were forced to defend themselves against charges of betraying their community.

Even as his sentencing approached, Cosby’s supporters continued to argue that his legacy remains intact. “He’s still America’s Dad, and they won’t ever take that away,” Cosby spokesperson Andrew Wyatt told reporters on Monday. “You can’t take away the legacy.” One day later, Wyatt told reporters that Cosby was the victim of “the most racist and sexist trial in the history of the United States.”

But outside of a performance earlier this year, Cosby himself has remained silent. Similar to his previous trial in 2017, he did not testify earlier this year, and he continued this streak of silence at the sentencing hearing. There was one exception, an outburst shortly after his conviction. As lawyers debated whether Cosby posed a flight risk, the comedian blurted out, “He doesn’t have a plane, you asshole!”

It was a surprising moment. And given Cosby’s prior criticisms of black people for everything from their language to their clothes, it was a fitting one. Cosby believed his role as “America’s Dad” gave him moral authority. It only hastened his demise.