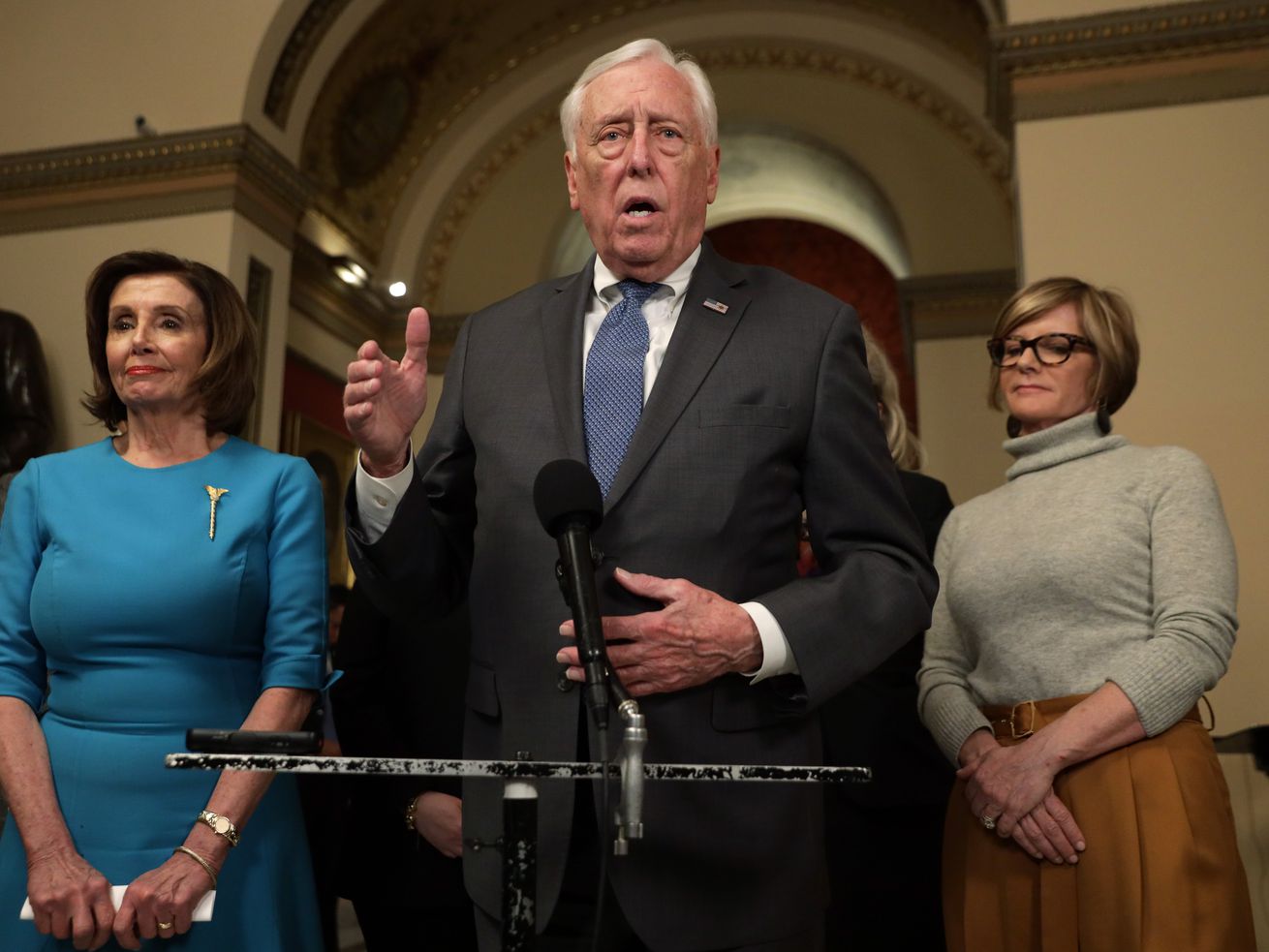 Democrats successfully pushed through a rule change to temporarily allow proxy voting during the coronavirus pandemic.

The US House of Representatives on Friday passed a historic resolution to temporarily allow remote voting during the coronavirus pandemic.

The resolution, introduced by House Rules Committee Chair Jim McGovern (D-MA), allows for voting by proxy on the House floor, as well as for remote committee hearings and bill markups. The resolution also provides for future remote voting during the pandemic using technology, “after a system is developed and certified.”

It’s the first time in centuries that the House has changed the part of its rules stipulating that “every Member shall be present within the Hall of the House during its sittings” when it comes time to vote.

House Majority Leader Steny Hoyer (D-MD) and other Democratic leaders have stressed these changes will be temporary and will go away after the threat of the Covid-19 pandemic subsides. Unlike other parts of the country, Washington, DC, has not yet seen its number of cases meaningfully drop; DC Mayor Muriel Bowser extended a city-wide stay-at-home order until June 8.

House Speaker Nancy Pelosi has previously said proxy voting should only be used in a limited fashion and be related to coronavirus legislation until Congress can safely return to in-person voting on the floor.

Hoyer in particular has been a proponent of proxy voting, citing other governments around the world that have made similar changes, as well as states around the US, including Iowa, Kentucky, Utah, and Vermont.

“We are seeing legislatures around the world and across our country working remotely, as well as the Supreme Court. There is no reason we cannot find a way to do so as well,” Hoyer told Vox’s Jen Kirby in a recent interview.

While Hoyer has stressed that remote voting during the pandemic should be a bipartisan issue, House Republicans haven’t been on board. The Friday vote passed 217-189 largely along party lines.

“The Democrats’ proposal calls for the House of Representatives to abandon ship — potentially for the remainder of the session,” House Minority Leader Kevin McCarthy (R-CA) said in a statement expressing his opposition to the measure. “As we have said from the start, any change to centuries-old rules of the House should only be done in a bipartisan way that achieves consensus. This proposal fails that critical test and would forever alter our democratic institution for the worse.”

The new resolution will give the House Speaker the authority to temporarily implement remote proxy voting and remote committee proceedings for 45 days, which can be extended or renewed.

The resolution spells out that proxy voting would happen in consultation with the minority leader, the House sergeant at arms, and the Capitol attending physician, and would be explicitly related to a public health emergency due to the coronavirus. The period of time for proxy voting could also be terminated early by the House speaker.

Here’s how proxy voting will work: A member who cannot physically be present will submit a signed letter (which can also be submitted electronically) to the House clerk designating who their proxy is.

While the resolution allows for committee work and markups to happen over technology like Zoom or another type of videoconferencing service, that would not apply to voting on the floor.

As Vox’s Jen Kirby wrote, videoconferencing has become the new mode of meeting, and sometimes voting, for many other legislative bodies around the world during the Covid-19 era. The UK Parliament has been meeting partially with a smaller number of its body in the chamber, and a larger number weighing in from home.

The United Kingdom’s “hybrid” Parliament has spent a few weeks in this mode, holding hearings and questions. About 50 members of Parliament are allowed to be present in the chamber, while another 120 can beam in from their computer screens. (Johnson, who had been hospitalized for the coronavirus, returned to the House of Commons on Wednesday for the first time since March.) Right now, Parliament is testing the technology it will need for remote voting, which could happen for the first time next week.

But the need to abide by social distancing guidelines accompanied a recognition that Parliament had very serious work to do to confront the pandemic, and that now more than ever the government needed to be held accountable. Both MPs and their constituents needed a platform to scrutinize the government’s response to Covid-19.

On Friday, the House joined this growing world trend. The Senate, which has been conducting some hearings remotely but has kept in-person voting, so far will not follow suit.

The Senate is more skeptical of proxy voting

Senate Majority Leader Mitch McConnell has been relatively firm about bringing senators back to the Capitol in order to work and vote.

Senators of both parties, including Rand Paul (R-KY), Dick Durbin (D-IL), and Rob Portman (R-OH), have offered their own proposals for how remote voting could work. The bipartisan measure from Durbin and Portman, if passed, would grant McConnell and Senate Minority Leader Chuck Schumer the authority to declare the need for a 30-day period of remote voting during a national crisis.

“Remote voting would then be allowed for up to 30 days, and the Senate would have to vote to renew remote voting after every 30-day period afterward,” they wrote in a Washington Post op-ed. “This limitation will ensure that voting remotely cannot become the norm without a consensus around the continuity of an emergency.”

The Senate has conducted some hearings over Zoom; the Senate Committee on Health, Education, Labor and Pensions conducted a high-profile hearing on coronavirus with Dr. Anthony Fauci and other public health experts remotely this week, as committee Chairman Lamar Alexander (R-TX) was quarantining after a staffer tested positive for Covid-19.

Still, the Senate has also shown the limits of in-person voting this week; a bipartisan Senate amendment to shield Americans’ internet browsing histories from government surveillance failed on Wednesday by one vote because some lawmakers were working from home.

McConnell hasn’t signaled interest in backing the remote voting resolution, though Democrats could use the leverage they have in the upper chamber to put pressure on him. Since every bill in the Senate requires 60 votes to pass, for example, Democrats could potentially withhold their support on future packages in an effort to force the consideration of remote voting.

Before leaving for an earlier recess, McConnell had said that lawmakers would use other means, like trying to stagger when they vote, to maintain social distancing in the Capitol.