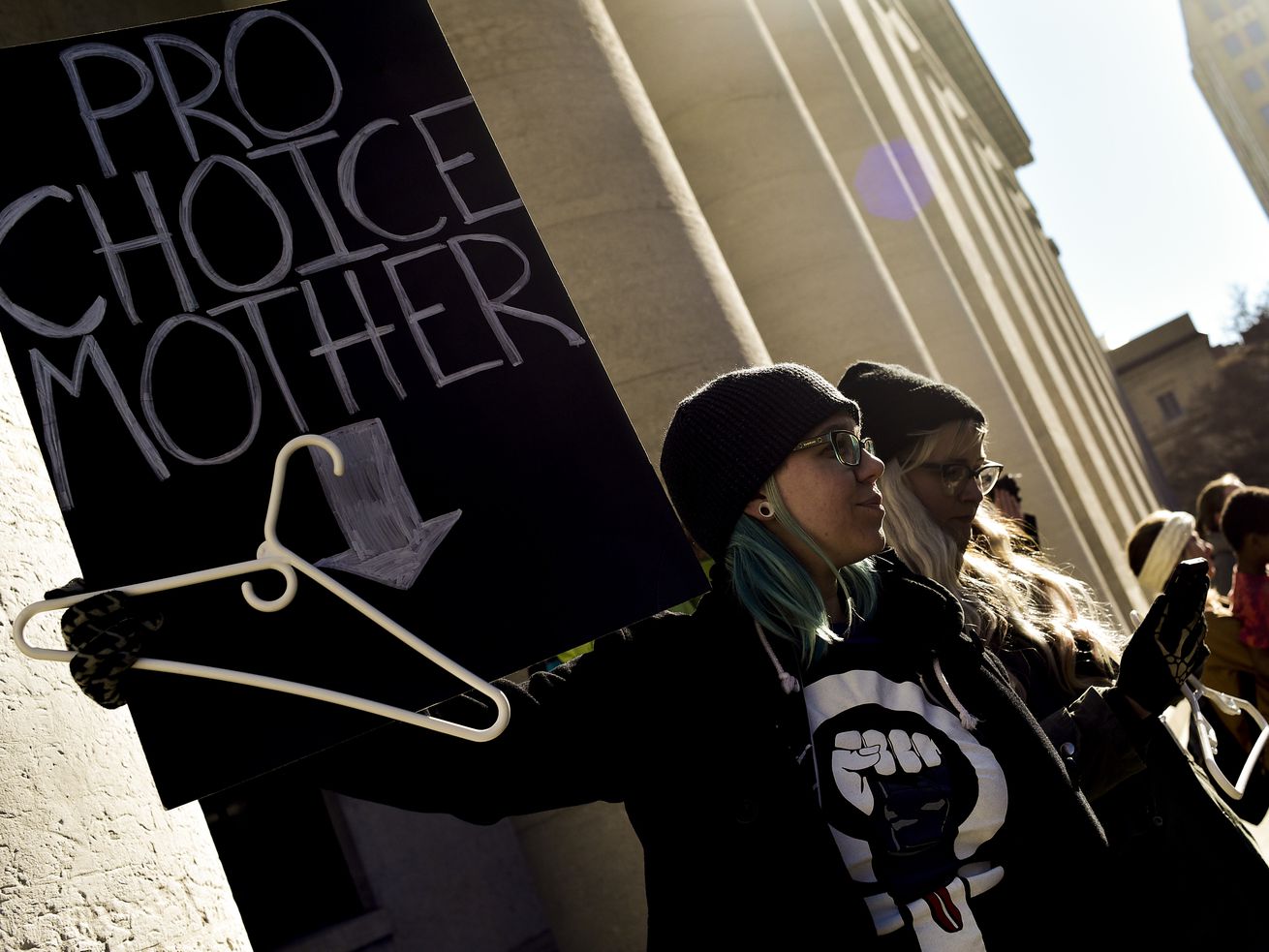 The bills used to be a fringe idea. Now they could threaten Roe v. Wade.

Georgia Gov. Brian Kemp on Tuesday signed into law a so-called “heartbeat” bill, banning abortion as early as six weeks into pregnancy. Georgia is the fourth state to pass such a law this year alone.

The bills prohibit abortion once a fetal heartbeat can be detected. But reproductive rights advocates and doctors say the laws, which prohibit abortion before many women know they are pregnant, amount to a near-total ban on the procedure.

“It’s basically a forced pregnancy bill. It’s a health care ban bill,” said Dr. Krystal Redman, the executive director of Spark Reproductive Justice Now, a group that works on reproductive rights and other issues for women of color and queer and trans people in the South.

But for some supporters of the bills, banning nearly all abortions isn’t a problem — it’s the whole point.

The rise of heartbeat bills in 2019 is a sign of where the abortion debate is today. A few years ago, such bans were considered too extreme even by some anti-abortion groups, said Rachel Sussman, the national director of state policy and advocacy at Planned Parenthood Action Fund. But with Donald Trump in the White House and Justice Brett Kavanaugh on the Supreme Court, abortion opponents around the country are eager to challenge Roe v. Wade. And banning abortion just six weeks into pregnancy may be a way to do that.

Heartbeat bills around the country are based on model legislation written by Faith2Action, which bills itself as “the nation’s largest network of pro-family groups.”

“While not the beginning of life, the heartbeat is the universally recognized indicator of life,” the group states in an FAQ on its website. (Faith2Action has not responded to Vox’s requests for comment.)

The model legislation says that if a patient is seeking an abortion, the doctor must use “standard medical practice” to determine whether the fetus has a heartbeat. If a heartbeat is present, the doctor is prohibited from performing an abortion, unless it is necessary to save the mother’s life or “to prevent a serious risk of the substantial and irreversible impairment of a major bodily function.”

The legislation does not include an exception for rape or incest. “No other law allows for the killing of an innocent child for the crime of his or her father,” the Faith2Action FAQ states.

The bills do not cite a specific gestational time limit for abortions, which has led to some debate. Reproductive rights groups say the bills amount to a ban on abortion at about six weeks’ gestation. That’s when a doctor can detect “a flicker of cardiac motion” on a transvaginal ultrasound, according to Dr. Catherine Romanos, a doctor who performs abortions in Ohio and a fellow with the group Physicians for Reproductive Health.

Six weeks’ gestation is just shortly after most pregnant women miss their first period, meaning many women don’t know they are pregnant at this stage.

Some reproductive rights groups argue that the term “heartbeat” bill is a misnomer, since the fetus does not yet have a heart at six weeks’ gestation — the cardiac activity detectable at that time comes from tissue called the fetal pole, as OB-GYN Jen Gunter has written. Planned Parenthood refers to the bills as six-week bans.

Meanwhile, some supporters of the bills argue that they might allow abortion slightly later in pregnancy than six weeks. The Ohio heartbeat bill, signed into law in April, does not specifically require a transvaginal ultrasound, said Jamieson Gordon, director of communications and marketing at Ohio Right to Life. Some doctors, she said, might choose to perform an abdominal ultrasound instead, and such a test cannot detect a heartbeat until around eight to 12 weeks’ gestation.

In Ohio, the precise requirements for determining the presence of a heartbeat will be up to the Ohio Department of Health. But, said Romanos, the law, which is slated to take effect later this year if not challenged by the court, will likely ban nearly all abortions in the state.

“There will a small minority of people who know their body really well” and immediately recognize they are pregnant who will be able to get an abortion under the new law, Romanos said. They will also need to be able to travel to a clinic and get together the money for the procedure within the time allowed. The law carves out an exception if a patient’s life is in danger, but not for a pregnancy resulting from rape or incest.

In all other cases, abortion will be illegal in Ohio. “It’ll be really devastating to people,” Romanos said. “It’s patient abandonment.”

The recently signed Georgia law does include exceptions for rape and incest, as well as for medical emergencies. But the law will hurt patients in Georgia, which has some of the highest rates of maternal mortality in the country, said Redman, the Spark Reproductive Justice Now executive director.

“People are dying because of the maternal health here in Georgia,” she said. “The fact that we’re eliminating a health care option, a service, will do a disservice to Georgians,” especially black, queer, and low-income people who are disproportionately likely to seek abortion care.

The bills have proliferated since Trump took office. Their backers are aiming at Roe v. Wade.

The first bill based on Faith2Action’s model legislation was introduced in Ohio in 2011. It didn’t pass. While similar laws successfully passed in North Dakota and Arkansas in 2013, heartbeat bills were not embraced by all anti-abortion groups. Ohio Right to Life was neutral on the issue until 2018, preferring to back less sweeping restrictions like a 20-week ban. “We are proponents of the incremental approach,” Gordon said.

But since the election of Trump, who promised to appoint Supreme Court justices to overturn Roe v. Wade, anti-abortion groups have been backing more restrictive laws.

“State legislators around the country are taking signals from Trump being in the White House and Kavanaugh being on the court that being radical and pushing legislation that really puts lives and health at risk is something they should be pursuing,” Sussman said.

“Heartbeat” bills began to proliferate at the state level last year, with Iowa passing its version in May.

And for Ohio Right to Life, the incremental approach had been so successful — the 20-week ban and a ban on a common second-trimester abortion method recently became law — that a heartbeat bill was now “the next incremental step,” Gordon said. The group threw its support behind the bill in December.

Similar bills have passed in Kentucky and Mississippi in recent months. The North Dakota, Arkansas, Iowa, and Kentucky bans have been blocked by courts, and Mississippi’s ban is being challenged. The laws in Ohio and Georgia are likely to see legal challenges as well.

But a court battle is precisely what some supporters of the bills are hoping for. Some legislators backing the heartbeat bills have said they see them as potential challenges to Roe v. Wade, the 1973 Supreme Court decision that prohibits states from banning abortion before a fetus can survive outside the womb. A heartbeat bill, whether it bans abortion at six or 12 weeks, falls well before that limit.

Sponsors of the Iowa law were explicit about their desire to challenge Roe. “The science and technology have significantly advanced since 1973,” said Iowa state Rep. Shannon Lundgren, the floor manager of the bill, in 2018. “It is time for the Supreme Court to weigh in on the issue of life.”

In Ohio, “we’re just trying to pass pro-life legislation that will save lives,” Gordon said, “but also if it ends up being a good vehicle to overturn Roe v. Wade, we would be thrilled about that as well.”

Meanwhile, heartbeat bills may already be affecting patients, even though none have actually taken effect.

“I think people are already confused,” Romanos said. “I worry that there are patients that heard about the bans passing and now just aren’t seeking care that they otherwise would seek because they think abortion is illegal already.”