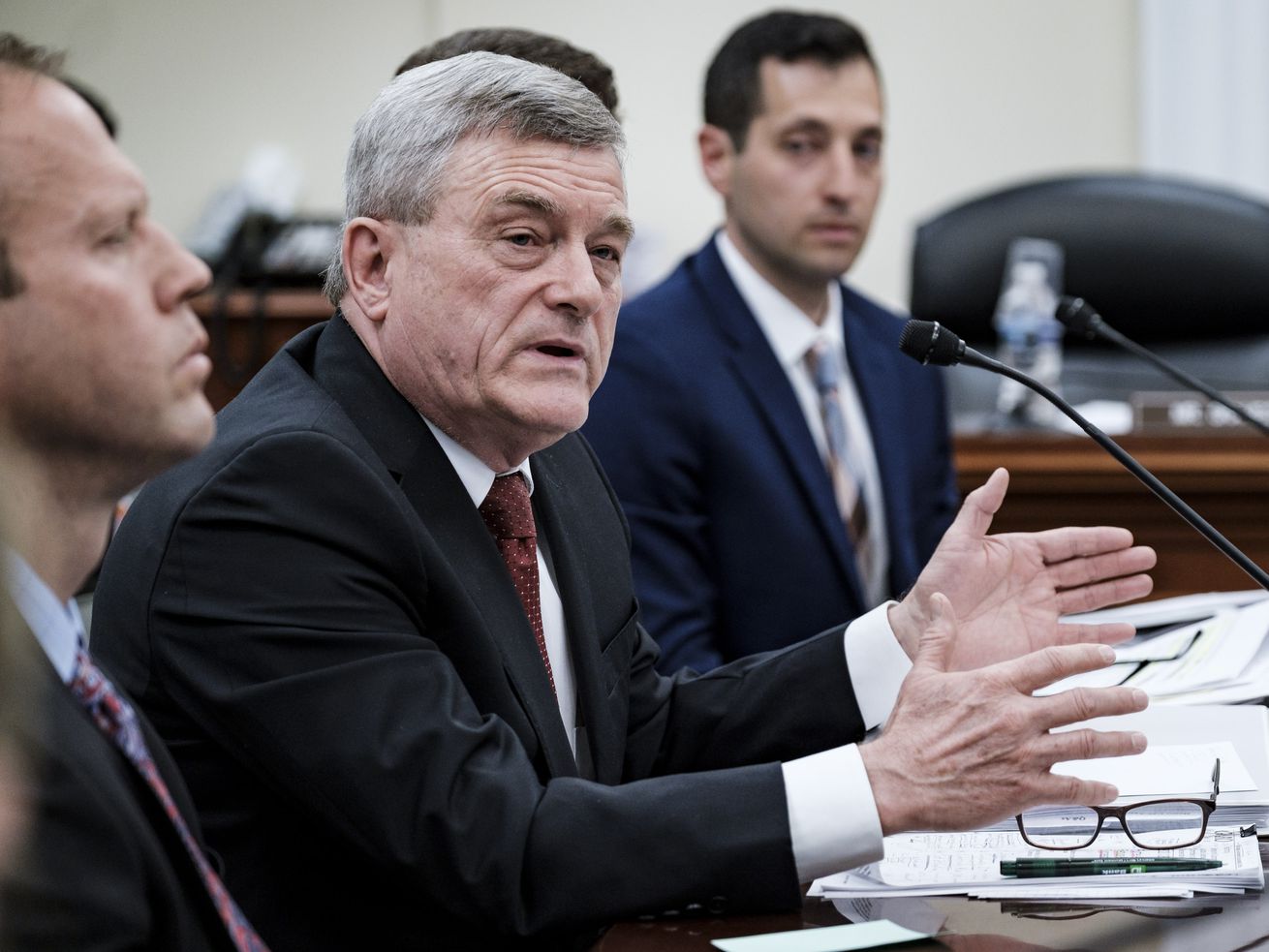 The battle over a simple question involves both Congress and the Supreme Court. And the stakes are high.

The latest face-off between House Democrats and President Donald Trump is over the proposed citizenship question on the 2020 census.

The House Oversight Committee voted Wednesday to recommend holding Commerce Secretary Wilbur Ross and Attorney General William Barr in contempt of Congress for refusing to comply with subpoenas in the committee’s investigation into how and why the question was added.

Trump invoked executive privilege earlier in the day, refusing to share documents that House Democrats want for their investigation.

The congressional back-and-forth is just one battle in the ongoing war over the citizenship question, which will ask all census respondents to declare whether they are a citizen of the United States on the standard census form for the first time since 1950.

The Trump administration claims it needs to ask the question to collect the data for the Justice Department to enforce the Voting Rights Act. But Democrats worry the real motivation is to discourage noncitizens from responding, skewing the population counts used to draw legislative districts and eventually giving Republicans a bigger electoral advantage. And the discovery of hard drives from a Republican operative, which included a 2015 study that found the citizenship question would allow the drawing of legislative districts that disadvantage Democrats, has added to a pile of evidence about the administration’s original intent.

The Supreme Court will rule by the end of the month on whether the question is constitutional and whether the Trump administration followed proper procedure in adding the question. The accuracy of the final census count rests on the results — with big implications for how the parties are represented in Congress for years to come.

The government claims the question is needed to enforce the Voting Rights Act. The evidence suggests that’s not the real reason.

The government’s justification for the question sounds simple enough: Asking about citizenship will provide more information about who is in the United States, and more information is always good. It claims it’s simply reinstating a question that’s been part of every census except 2010’s (although it hasn’t been on the short form used by every respondent since 1950).

But critics are skeptical that the Trump administration intends to use citizenship data for good reasons. And they are seriously concerned that adding a single citizenship question to the 2020 census could scare away millions of immigrants from filling out their mandatory surveys — throwing off the count of who’s present in America that’s used to determine congressional apportionment for the next decade, allocate federal funding for infrastructure, and serve as the basis for huge amounts of American research.

The Commerce Department, which is in charge of conducting the census, claims it added the question in response to a request sent last fall by the Department of Justice, then headed by Attorney General Jeff Sessions, that asked for a citizenship question on the 2020 census. The DOJ’s reasoning, adopted by the Department of Commerce, was that to appropriately enforce the Voting Rights Act, the DOJ needs to know where eligible voters, and specifically eligible voters of color, live — and so they have to be able to distinguish citizens from noncitizens.

But critics of the Trump administration see a more political motive. Records exposed in a New York lawsuit over the census question made it clear that their skepticism was well founded, because Wilbur Ross and the Commerce Department, at least, hadn’t been telling the public the whole truth about the process.

Emails showed that for months, Ross himself had already been asking around about adding a citizenship question, and Commerce Department officials had tried to get other agencies involved to “clear certain legal thresholds.” In fact, Ross and the Department of Commerce had to ask the DOJ to send them that letter giving the Voting Rights Act rationale.

Furthermore, the emails showed, Ross was warned about potential downsides of adding a new question — most notably, concerns that it would warp the census results by discouraging noncitizens from responding. But the question was added anyway.

There is one respect in which the Trump administration cares a lot about voting — it cares a lot about the complete and utter fiction that large numbers of noncitizens are able to vote. The DOJ letter on the citizenship question plays into that belief, quoting a court decision that says “the dignity and very concept of citizenship are diluted if noncitizens are allowed to vote.”

The census doesn’t determine who gets to vote. But it does determine how votes count. And voting rights advocates fear that generating citizenship data from the “actual enumeration” of the census would give the federal government the information it needed to apportion congressional seats based on how many citizens lived in each state, rather than how many people — something that would likely hurt Texas and California.

It could also encourage state efforts to draw congressional districts based on citizen population. The Supreme Court has routinely ruled that states are allowed to use total population when drawing districts — including in a 2016 decision where the Court sided 8-0 with Texas’s use of total population — but it hasn’t explicitly said that they have to.

A conservative state government that wanted to allocate its representatives based only on people who could vote would already be able to do that using American Community Survey data (because redistricting, unlike reapportionment, is allowed to use sampled data). But it would be that much easier if that data were part of the essential census package.

There is, however, one big problem. Demographers studying the ACS data keep noticing that people often mark themselves as citizens when there’s pretty much no way they could be citizens — they’ve only lived in the US for a year, for example.

According to Jennifer Van Hook, a professor of sociology and demography at Penn State University, demographic groups that have large shares of unauthorized immigrants are the ones most likely to inaccurately mark themselves as citizens: Mexican men of working age, for example.

Maybe they don’t understand the question — or maybe it’s because they’re worried about what will happen if they tell the truth.

The US census doesn’t have a way to “fix” undercounts

In most demography — say, polling — when one group isn’t as likely to respond as another group, researchers can use statistical modeling to make sure they’re not underrepresented in the results.

The census can’t do that. It’s bound by the requirement for enumeration: counting. What it gets is what it gets.

Over the past couple of censuses, the final census count has been pretty close to accurate: In 2010, 95 percent of households were counted accurately — in fact, overall, the 2010 census slightly overcounted the US population.

But that takes a lot of effort.

Only 67 percent of Americans responded to the initial census survey by mail in 2000, and 72 percent in 2010. To get the rest, the Census Bureau dispatched half a million temporary census takers to visit houses up to six times in the hopes of speaking with someone in person — often hiring census takers from within the community, to reduce the anxiety of speaking to a government official.

If that didn’t work, they’d try to get information from neighbors about who was living in the silent house — and if that didn’t work, they’d have to do “nearest-neighbor imputation,” or basically assuming that the household looks identical to that of the most similar household nearby. The Supreme Court has ruled that imputation is okay because it’s just filling in known gaps in the data, rather than speculating about where the gaps would be.

Those methods don’t get everybody. Van Hook points out that people who return their census forms might not be telling the truth about how many people are in their household because they’re trying to protect, say, relatives who are unauthorized immigrants. Or a census respondent might not count a family friend who’s sleeping on the couch for a few weeks while he finds a job because he doesn’t really live at the house — but he doesn’t live anywhere else, either.

Unsurprisingly, these sorts of problems are more likely to show up in certain groups than others. African Americans, particularly African-American men, have been undercounted in the past two censuses.

So have Latinos, who were undercounted by 0.8 percent in 2000 and 1.5 percent in 2010. The Census Bureau says the change between the two censuses wasn’t statistically significant. But if the Latino response rate plummets in 2020, the undercount rate will soar.

The citizenship question might not damage response rates. But it’s a huge risk.

The Trump administration has rejected the idea that asking about citizenship is likely to create a substantial undercount that didn’t exist before.

“While there is widespread belief among many parties that adding a citizenship question could reduce response rates, the Census Bureau’s analysis did not provide definitive, empirical support for that belief,” the memo from Commerce Secretary Wilbur Ross says.

That’s true. There simply haven’t been any studies or experiments either way. And it’s totally possible that a citizenship question wouldn’t have that big an impact — whether because it wouldn’t matter that much or because immigrants will already be afraid of the census no matter what it’s asking.

The problem, say demographers and advocates, is that the government is risking a lot for the sake of getting this question back on the form.

Usually, census questions go through a pretesting process that can take years. But the 2020 census is already well past the development stage. As the Commerce Department announced the addition of a citizenship question, the Census Bureau was conducting its only full “dress rehearsal” field test for the 2020 census, in Providence, Rhode Island.

Advocates and researchers don’t have a ton of data to help them predict the impact of adding a question that’s never been tested. But for a social scientist, that in itself is reason for concern.