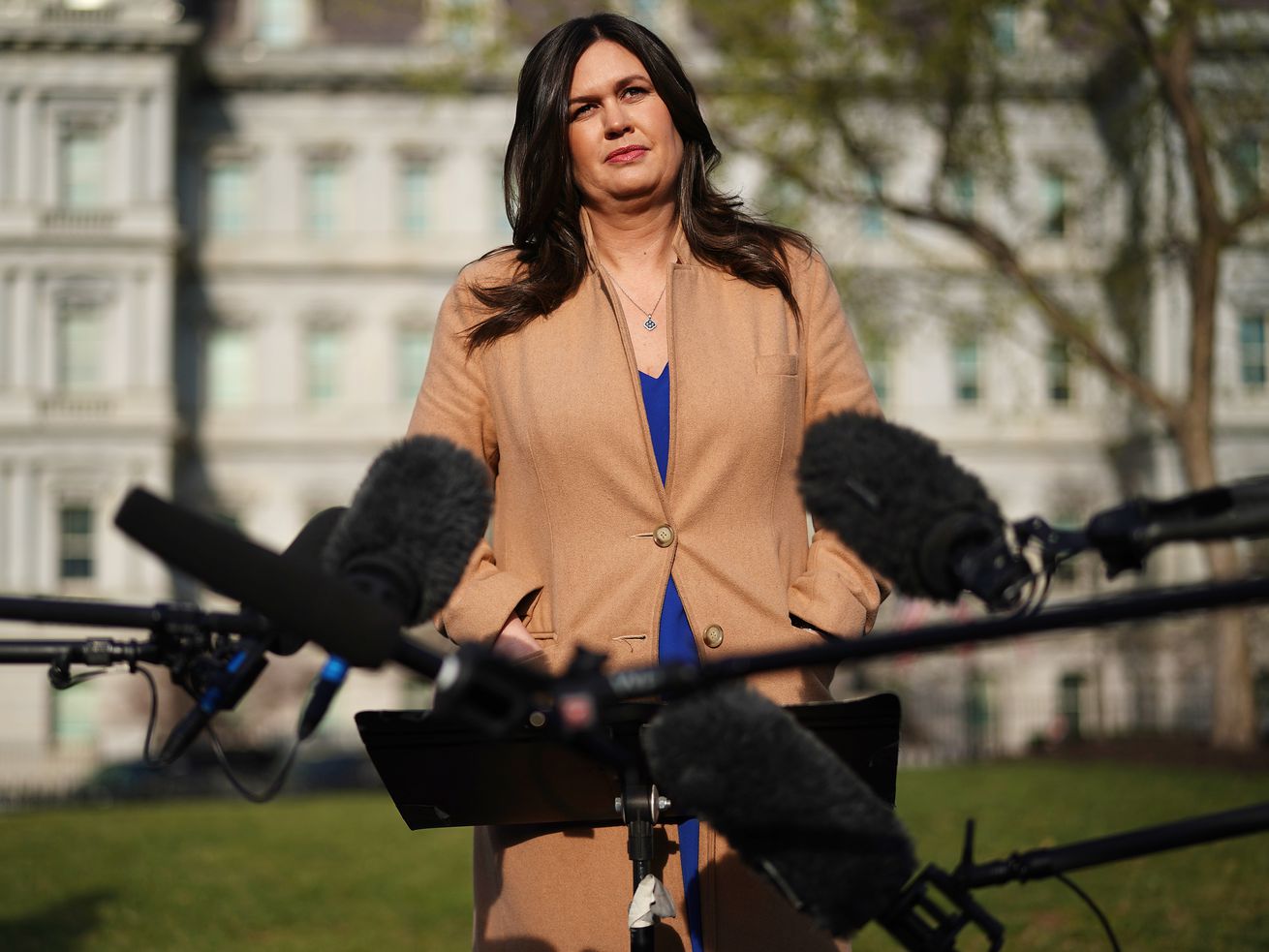 Sanders admitted to investigators that a key claim she made was baseless. She’s still defending it anyway.

Sarah Huckabee Sanders’s lying is under new scrutiny in light of the Mueller report.

Special counsel Robert Mueller’s final report about his investigation of Russia’s interference in the 2016 election and Donald Trump’s involvement in it details seven instances in which Trump’s press secretaries lied to the public. As my colleague Dara Lind explained, each of the lies was meant to shield President Trump from suspicions he obstructed the FBI’s investigation into his campaign.

Five of those seven lies were told by Trump’s current press secretary, Sarah Sanders. Like her predecessor, Sean Spicer, Sanders earned a reputation for shamelessly protecting the president well before Mueller’s report saw the light of day last week.

But how Sanders has responded to the new revelations says something about the rhetorical methods she uses to avoid accountability.

Sanders is under fire for one lie in particular

One of the lies detailed by Mueller is notable because it indicates Sanders lies about lying. The story begins in May 2017, on the heels of Trump firing then-FBI Director James Comey — a move Trump quickly (and perhaps for him regrettably) admitted was about his frustrations over the FBI’s active investigation of his campaign.

In order to shield Trump from obstruction allegations, Sanders during a press briefing offered a different rationale for Comey’s firing. She said that “countless members of the FBI” had contacted her to say they had lost confidence in Comey, the implication being that Trump was merely acting in response to the wishes of FBI rank-and-file when he decided to fire him.

Even at the time, Sanders’s claim about Comey not having the support of the FBI agents was implausible. It was almost immediately contradicted during congressional testimony by Comey’s successor, Andrew McCabe, and as the exchange in the below video indicates, reporters made it clear during a press briefing that they didn’t buy what she was trying to sell them.

Mueller’s report said Sarah Huckabee Sanders told investigators she made comments to reporters that were “not founded on anything.” Here’s that moment pic.twitter.com/cqrnTqKDLa

When the time came for Sanders to be interviewed under oath by investigators working for the special counsel, her story suddenly changed. She told the special counsel’s team that her comment about FBI agents contacting her to express concerns about Comey was actually a “slip of the tongue” that was not based on anything. So she acknowledged pushing a falsehood to Mueller’s team, but said it was just an accident.

Since the report, Sanders stuck to the “slip of the tongue” excuse — even though it most certainly seems untrue

During a string of media appearances last week, Sanders stuck to her “slip of the tongue” talking point. She was grilled about its implausibleness by ABC’s George Stephanopoulos during an interview on Friday, but bizarrely tried to pin blame for her lie on Democrats, saying ,“I’m sorry I wasn’t a robot like the Democratic Party that went out for two-and-a-half years and stated time and time again that there was definitely Russian collusion between the president and his campaign, that they had evidence to show it, and that the president and his team deserved to be in jail.”

Pressed repeatedly on her comments on FBI agents, Sarah Sanders tells @GStephanopoulos, “It was the heat of the moment, meaning that it wasn’t a scripted talking point. I’m sorry that I wasn’t a robot like the Democratic Party” was about Mueller probe. https://t.co/mOQZNKl1wy pic.twitter.com/y3xcNwVYHg

As Lawrence O’Donnell detailed on his MSNBC show last Friday night, Sanders first made her false claim about Comey’s firing while she was reading a statement during a White House briefing — a circumstance indicating she pushed the falsehood more intentionally than she acknowledged first to Mueller’s investigators and now to the general public.

The deflection and whataboutism Sanders has been using to downplay Mueller’s revelation about her lying about lying is standard procedure for her when she’s asked to explain false claims either she or the president has made. Consider how she tried to turn a scandal involving the Trump administration allowing officials without proper security clearances to handle classified material back on the press early last year, or how she has downplayed concerns about Trump’s incendiary rhetoric by pretending Democrats do the same thing.

But considering what she acknowledged to Mueller about Comey, people are buying it even less this time around.

Reporters have been growing impatient with Sanders’s lies. Now, one is calling for her job.

It’s no secret that reporters have a lot of tensions with Sanders, who consistently evades the truth during press briefings. During her tenure as press secretary, there have been blowups over her use of doctored video footage to demean CNN’s Jim Acosta, her dismissiveness about gun violence in schools, and Trump’s lies about voter fraud, to mention a few memorable examples.

But now, the Mueller report is causing at least one reporter to openly call for Sanders to step down from her job. During a CNN panel discussion last Friday, one of the reporters Sanders regularly spars with during press briefings, April Ryan of American Urban Radio Networks, said that in light of the Mueller report, she thinks Sanders should lose her job. But in so doing, she gave Sanders new ammunition to deflect from the latest evidence that she’s a shameless liar.

“The American people can’t trust her. They can’t trust what’s said from the president’s mouthpiece, spokesperson from the people’s house,” Ryan said. “Therefore, she should be let go. She should be fired, end of story. When there is a lack of credibility there, you have to start lopping the heads off.”

Ryan’s use of “start lopping the heads off” gave the White House and Trump’s allies in the media ammo to turn the tables. During a Fox & Friends interview on Monday, show hosts purposefully misunderstood Ryan’s figure of speech, and twisted it into a direct threat on Sanders’s well-being.

Much like when Michelle Wolf made a joke last year about Sanders making lies part of her literal makeup, the press secretary twisted criticism of her into portraying herself as a victim.

“I have had reporters say a lot of things about me. They’ve said I should be choked. They’ve said I deserve a lifetime of harassment,” Sanders said. “I certainly never had anybody say I should be decapitated — this takes us to a new low even for the liberal media. It once again proves why this journalist isn’t taken seriously.”

Sanders claims to understand April Ryan’s comments that she should be fired as a threat of “decapitation” pic.twitter.com/9eJBykW0wR

This is a standard move in Sanders’s playbook. Consider her response after comedian Michelle Wolf turned her lying into a punchline during last year’s White House Correspondents’ Dinner last April, saying Sanders “burns facts, and then she uses that ash to create a perfect smokey eye. Like maybe she’s born with it, maybe it’s lies. It’s probably lies.”

Sanders had already established a reputation for lying by that time, but she managed to portray herself as a victim by seizing upon Wolf’s “smokey eye” line and framing it as demeaning her appearance.

“That evening says a whole lot more about her than it does about me,” Sanders said on Fox & Friends. “I hope that [Wolf] can find some of the same happiness that we all have, because I think she may need a little bit more of that in her life because the rest of us here are doing great.”

Notably, what Sanders did not do is respond to the observation at the core of Wolf’s joke: She lies, and she lies a lot.

One year later, not much has changed.