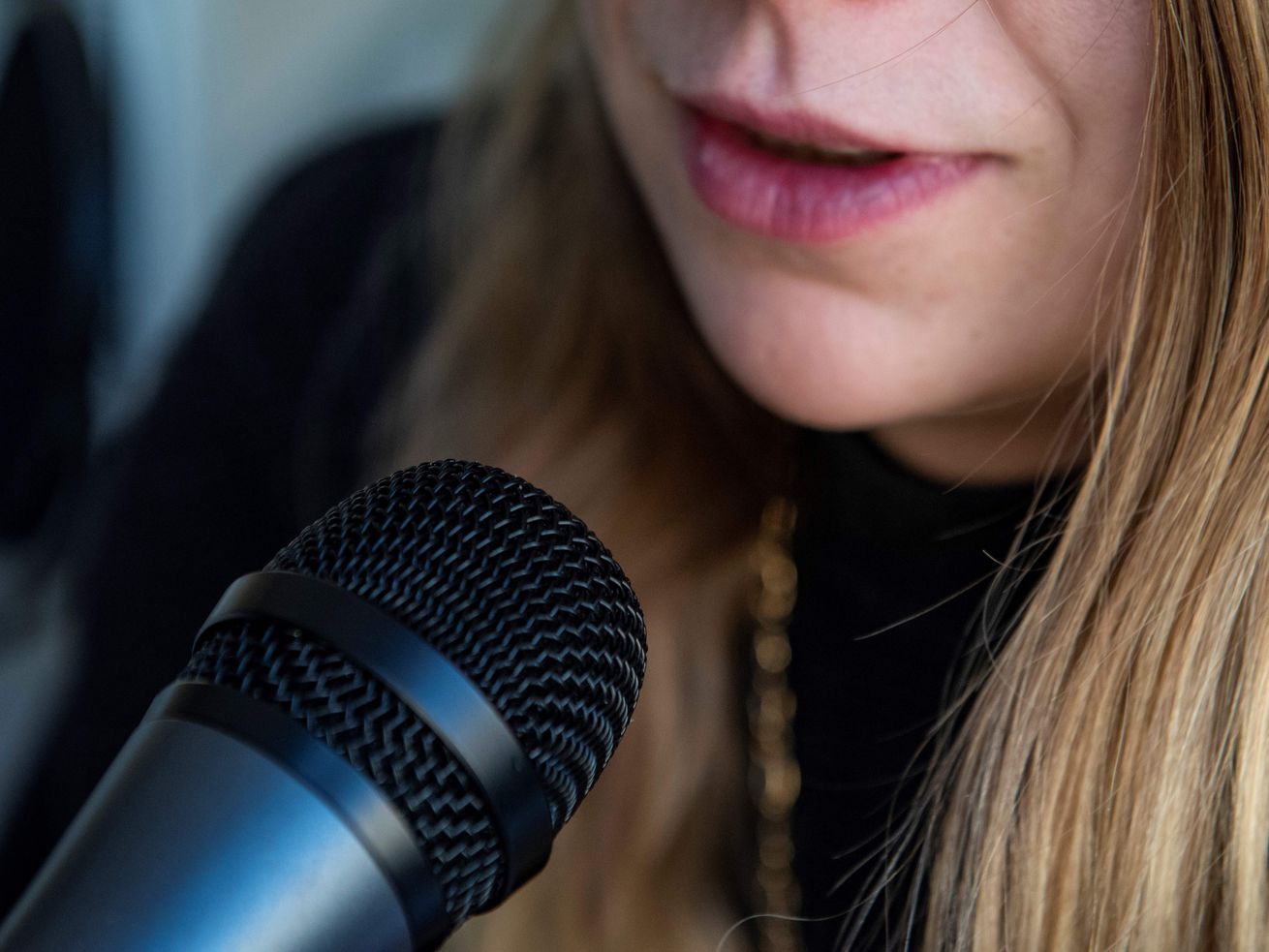 Tapping fingernails triggering goosebumps, whispers sending shivers down the spine: The brain-tingling world of ASMR has the internet clamoring for sounds that feel good.  | Eric Baradat/AFP via Getty Images

“I can’t imagine my day without it,” an ASMR user told Vox.

Kevin Frazelis’s head felt like it was on fire.

The pressures of teaching high school English and finishing his master’s degree program had already raised his anxiety level. But what made the New York City resident’s anxiety spike was the coronavirus pandemic unfolding for weeks outside his apartment.

As he watched the news, the 29-year-old noticed tension fill his body.

“Normally I’m anxious, but this crisis tripled it,” he told me. The “unknown about what’s going to happen with all this” worried him the most.

Luckily, Frazelis has a solution for such moments. He searches for “ASMR” on YouTube, clicks on a video, and feels relief as the discomfort melts away. The video he usually chooses features someone carefully, calmly, and quietly cutting hair that isn’t actually there. It’s a role play, but the sensation Frazelis gets from hearing the rasp of the scissors calms his mind.

“It’s reassuring, and makes me feel like we’re going to get through this,” Frazelis said. “I don’t think I’d have been able to handle any of the things I’m doing without ASMR.”

ASMR stands for “autonomous sensory meridian response,” a feeling millions of people say they get when they watch videos of people whispering, tapping objects, or giving them personal attention. It manifests in different ways, but the most common feeling is that of “tingles” that start in the head and work their way down the body.

Over the last few years, it’s become an increasingly popular way for people to relax or fall asleep. During the coronavirus era, when for many stress and anxiety is particularly high, the dozen or so ASMR users and creators I spoke to around the world told me that even more people are turning to it for relief.

“You’re thinking about the coronavirus constantly,” said Valeria Ornelas, a 23-year-old food and retail marketer from Guadalajara, Mexico, who didn’t use ASMR until the pandemic hit. “You start off the day with anxiety building up,” and then the videos “help me relax and release tension.”

Many of the people I spoke with who use ASMR struggle with anxiety and receive professional help for it. But therapists aren’t always on-call, and medication, for some, has its limits. ASMR YouTube videos, Spotify streams, or podcasts, meanwhile, are just a click away. It’s no surprise, then, that ASMR has become one way people are finding a sense of tranquility in troubling times.

“Listening to a video is more convenient than other coping strategies,” said Michael Bonebright, a 34-year-old blogger from Alabama with post-traumatic stress disorder. “It just works for me.”

It wasn’t until about 10 years ago that people could put a name to the sensation they were getting.

Before then, Jennifer Allen told the New York Times last April, she struggled to understand the feelings she’d get when watching videos about space. It took about nine years before she found someone else online having the same tinging sensations she did. “Oh my gosh,” she remembers thinking. “These people are talking about exactly what I experience,” the New York Times reported.

Realizing she wasn’t alone, Allen started a Facebook group dedicated to learning more about the shared experience. There, she gave the sensation the scientific-sounding name and acronym, which have since stuck.

“I came up with a lot of ideas, trying to think of one that would capture the key components of the sensation without the possibility of being too embarrassing or too removed from the actual experience,” Allen said in a 2016 interview. “I ended up listing the key characteristics and then looked for terms that would adequately describe each one.”

Ten years later, much remains unknown about ASMR or the science behind it. There are only about a dozen peer-reviewed articles on the subject. There’s still no clear reason why whispers, bowl scratching, or simulated personal attention triggers tingling sensations in some people but not others. And there’s also no consensus scientific explanation for what, exactly, is happening inside the brain to cause such feelings.

Experts, though, have some theories.

Steven Novella of the Yale University School of Medicine suggested in 2012 that “perhaps ASMR is a type of seizure” or “a way of activating the pleasure response.”

ASMR University, a website dedicated to “the Art and Science” of ASMR, lists several other hypotheses in a post titled “The Origin Theory of ASMR,” including that the phenomenon is related to parent-infant bonding. During that process, the website says, the body releases endorphin transmitters which bind with receptors “best known for inhibiting pain while also stimulating pleasure, relaxation, and sedation.”

ASMR University was created by Craig Richard, a professor at the School of Biopharmaceutical Sciences at Shenandoah University, whose research focuses on ASMR. He told me that the biological and clinical effects of the coronavirus still need further study but that the universal feeling of comfort that comes with watching the videos seems to be settled.

“What’s consistent is how we feel during ASMR,” he said.

Layla Lopez, a 35-year-old Cayman Islands native whose Trigger the Tingles ASMR YouTube channel has 61.7K subscribers, told me that the familial connection angle might be key to her rising popularity. “A lot of people tell me I remind them of their mom that died or their grandma,” she said. “They get a really homey vibe from me.”

What is clear, though, is that the people experiencing the sensations say they’re real and that they provide relief.

A 2015 analysis published in the journal PeerJ by two psychology researchers at Manchester Metropolitan University and Swansea University in the UK surveyed 475 ASMR media consumers. It found ASMR experiences may improve mood and even relieve pain symptoms. And a 2018 peer-reviewed study in the journal PLoS One found that “ASMR is a reliable and physiologically-rooted experience that may have therapeutic benefits for mental and physical health.”

Specifically, the researchers in the PLoS study found that those who experienced ASMR had an “increased pleasant affect,” a “reduced heart rate,” and a greater ability for their skin to conduct electricity.

These feelings may explain why ASMR videos have become so popular. According to Google Trends, searches for the term “ASMR” on YouTube have skyrocketed over the past five years.

It’s so mainstream now that the 2019 Super Bowl even featured an ASMR-inspired commercial for Michelob Ultra.

The genre’s rise is stunning even to those who study it. “If you had predicted a couple of years ago that one of the most popular videos on YouTube would involve people crinkling paper, you’d be called crazy,” said Richard.

Many of the “ASMRtists,” as creators and stars of ASMR content are known, are young women (yes, there are men, too!) and content of the videos varies widely.

Some simply have a person in front of a microphone or two talking in a gentle whisper while offering personal attention, meaning the person in the video acts like the viewer is present and both can physically interact. Others cycle through a series of objects and tap or scratch them to offer new triggering sounds. Some eat food and let their mouth sounds calm the viewers. And then there are some role-play videos, like an ASMRtist giving the viewer a “haircut” or pretending to be Medusa to offer a more fantasy-based experience.

Different ASMR genres work for different people, but the main goal of each is the same: relax the viewer and distract them from their troubles. “For me, anxiety is kind of this monstrous thing that hangs out in my head,” Bonebright, the blogger from Alabama, told me. “When I’m listening to ASMR, I’m not listening to the thing in my head.”

For Richard, it makes sense people are flocking to ASMR content during the coronavirus. People need “positive social interaction and affection,” he told me. “That’s what’s being provided in the videos.”

Tingting, a 28-year-old from Los Angeles, is one of the most popular ASMRtists, with 1.3 million YouTube subscribers. From her small walk-in closet, she typically uses a very quiet whisper and slow scratches of the microphone to induce the tingling sensation and calming effects. Since the coronavirus pandemic hit, she said, she’s noticed about a 5 to 10 percent jump in viewership. “There’s definitely been an increase in interest for ASMR,” she told me.

But when she makes videos, she purposefully tries to keep the pandemic far from viewers’ minds. “Most of my audience doesn’t want to be constantly reminded of all the anxiety and stress this virus has caused,” she said, though she does get requests to make Covid-19-specific content. “I want my audience to have an escape when they watch my videos.”

What makes her happiest, she told me, is when those watching her videos can relax enough to get some sleep.

Lopez, the ASMRtist who now lives in London, has gone a different direction with her channel.

She, like Tingting, has noticed a roughly 10 percent spike in viewership during the pandemic. As a result, and because her viewers have asked for it, she’s started to make coronavirus-specific videos to reassure people “we’re all going to be okay.” She’s shifted her style to involve more simulations of touching the viewer or offering hugs, aiming to be a “calm in the chaos.”

She said she now receives more messages requesting coronavirus-related videos than for any other kind of content. She told me that if a video gets picked up by a major social media outlet, the video becomes so popular that she could make more than $600 for that single video overnight.

Many researchers and scientists remain skeptical about ASMR’s potential for therapeutic benefits, which remains entirely unproven. There is no clear indication that ASMR is dangerous for the consumer. And, of course, there are evidence-based ways for someone to relax, such as meditation, meaning no one has to rely solely on ASMR to calm down.

Still, people like Kjerstin Wood, a 28-year-old digital fundraiser in Seattle who struggles with anxiety, told me she finds some companionship in ASMR videos.

“They’re almost like the equivalent of a thunder buddy or comfort blanket,” Wood said. “Their calm, reassuring voices help me focus and have moments of peace, or block out other distractions while I need to get things done. It helps me be more in the present moment, rather than letting my thoughts spiral out of control.”

For Ornelas, the food and retail marketer from Guadalajara, simply putting ASMR soundscape videos on in the background helps her work from home. Her house used to be her oasis, where she could escape from her job.

But now that she’s working from home due to the coronavirus, she’s begun to develop tension in her arms and toes that she can only describe as the white noise from a television. Once the sounds stream into her headphones, though, that tension dissipates.

Again, there’s still no clear scientific explanation for what these people feel. But it does seem to provide relief to many. “I can’t imagine my day without it,” Ornelas told me.