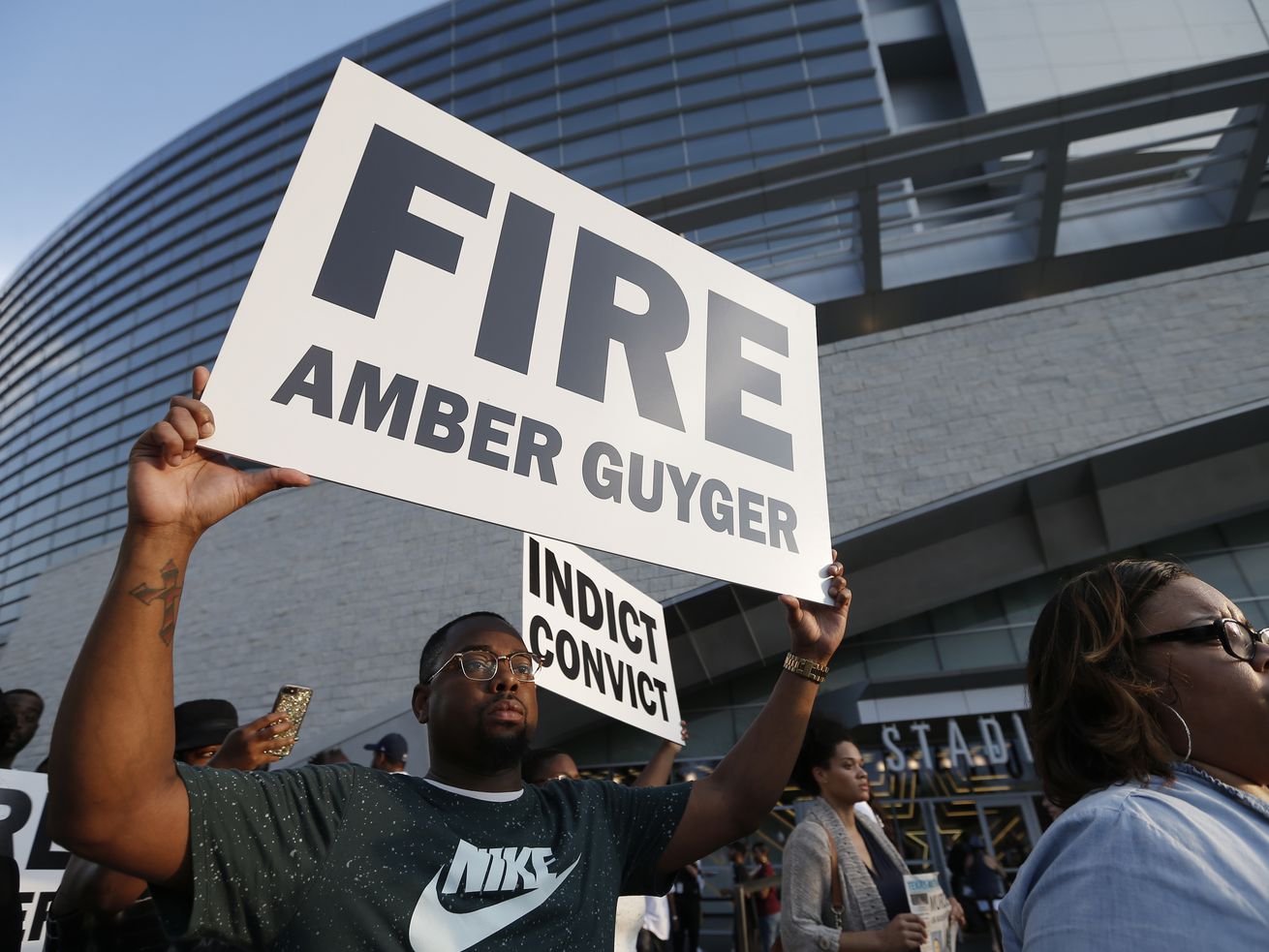 The shooting of Botham Jean, a black man who was killed by an off-duty police officer in his own home in Dallas earlier this month, has made its way to Texas’s Senate race.

Democrat Beto O’Rourke recently agreed with calls by Jean’s family and some in Dallas’s broader community for Dallas officer Amber Guyger to be fired. “There has to be a full accounting for how young black men continue to be killed in this country without accountability, without justice, without these full investigations, without respecting their civil rights,” O’Rourke said during a Friday campaign rally. “This cannot continue.”

Sen. Ted Cruz had a different response, arguing that people were rushing to judgment on the case and that O’Rourke and other Democrats were “quick to always blame the police officer.”

“It may well be that two lives were destroyed that night,” Cruz said. “That obviously the individual that was at home in his apartment and found himself murdered — that is horrific and a nightmare.”

He added, “She may have been in the wrong and if a jury of her peers believes that she behaved wrongly then she’ll face the consequences. But I don’t think we should jump to conclusions.”

Cruz’s comment comes just days after lawyers representing Jean’s family condemned the release of a search warrant that showed police had looked for drugs in his apartment after the shooting.

Lee Merritt, an attorney representing Jean’s family, called the warrant’s contents evidence of a “smear campaign” against Jean. In an interview with the Washington Post, Merritt said that the warrant fit into “a familiar pattern” seen in police shootings involving black victims. “It’s a systemic issue,” Merritt said. “We’ve been conditioned to associate black people with crime.”

While the Jean shooting differs from other high-profile police shootings, it’s telling that similar narratives — and fights over them — have emerged. And it has fueled a growing concern that in an incident where Botham Jean was killed in his own home, Amber Guyger is largely being presented as a victim.

In high-profile police shootings, black victims are often blamed for their deaths

According to Guyger’s account, when she arrived home at the South Side Flats apartments after a long shift on September 6, she didn’t realize she had gotten out on the wrong floor of her building and that the apartment she was in was not, in fact, hers. Seeing a “large silhouette” in the dark apartment, she said she thought she was being burglarized. So she fired her gun, hitting Jean in the chest. When she turned on the lights in the apartment, she realized her mistake.

Jean’s family disputes her account, saying Guyger should have noticed signs that she was not at her apartment, and that witnesses alleged hearing her knocking on Jean’s door and yelling. Local reporting has highlighted differences between Guyger’s explanation on September 9 and what was described in a warrant issued shortly after the shooting. Her rendition of events has also been criticized for implying that Jean’s failure to comply with her commands led to him being killed in his own home.

The framing of Jean as somehow culpable for his own death is not limited to the arrest affidavit. As the Atlantic’s Adam Serwer notes, NRA spokesperson Dana Loesch recently argued that Jean might still be alive if he had a gun. Serwer points out that this argument is an example of a catch-22 for black men killed by police: “There are no circumstances in which the responsibility for a police shooting of an unarmed black person cannot be placed on the victim.”

That’s partially because America’s laws and cultural conversation about policing both afford significant deference to police officers, and it remains rare for them to be tried or convicted in police shootings. According to research from Philip Stinson, an associate professor at Bowling Green State University, out of 80 officers charged with murder or manslaughter for on-duty shootings between 2005 and April 2017, roughly 35 percent were convicted.

Another result of this is that when an officer violates policy, his or her victim’s transgressions may get the most scrutiny. A 2016 paper published in the Journal of Human Behavior in the Social Environment found that there have been several high-profile police shootings — including of Michael Brown, Tamir Rice, and Eric Garner — where things like a victim’s criminal record, appearance, or behavior “posthumously criminalized” them. In other cases, an acknowledgment of police wrongdoing is still followed by the supposed misdeeds of the dead, as was the case for a Florida man whose family was given just $4 in a wrongful death suit. The amount was attributed to a jury’s determination that the man’s intoxication played a role in his death.

To be fair, there are aspects of this narrative that don’t fully apply to the Jean shooting. Guyger was off-duty, for example, and legal experts like South Texas College of Law Houston professor Kenneth Williams say it might be harder for Guyger to utilize a “deadly force” defense if she is tried as a civilian, rather than as a police officer.

But the attention that has been paid to explaining how she ended up in the wrong apartment and the details of her account have only increased concerns and frustrations that after years of unsuccessful demands for police accountability, Guyger may end up as yet another police officer who goes unpunished for a fatal shooting.