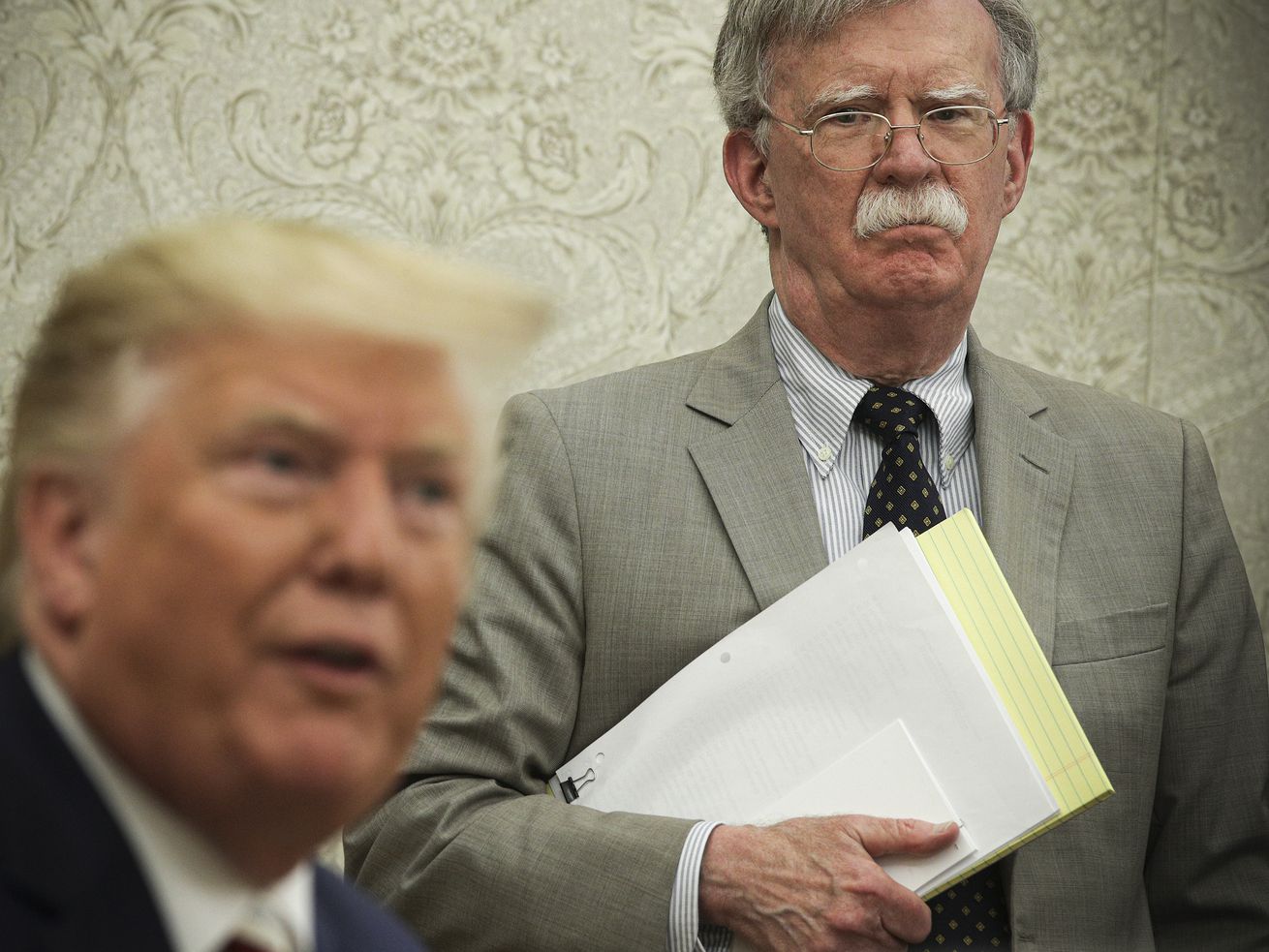 President Trump speaks to reporters as John Bolton looks on during a meeting with President of Romania on August 20, 2019. | Alex Wong/Getty Images

What we’ve learned from the flurry of excerpts released Wednesday.

John Bolton is publishing a book that recounts his tenure as President Donald Trump’s national security adviser. The Trump administration on Tuesday sued to delay its release, a week before it was set to be published. So, naturally, major news outlets have now “obtained” the book and are releasing the most explosive passages from the memoir.

Bolton’s book, The Room Where It Happened, contains numerous remarkable allegations about things President Trump said and did during his interactions with foreign leaders — none of which, it’s worth remembering, Bolton felt compelled to speak publicly about in the months since he left the administration or to testify about unless he was formally subpoenaed during the Senate’s impeachment trial.

But now that he has a book to sell, the longtime Republican foreign policy hand seems ready to dish.

In the book, Bolton — who, again, declined to voluntarily testify under oath during the impeachment trial because the White House told him not to — accuses the Democrat-led House of Representatives of committing “impeachment malpractice” by not going beyond Trump’s dealings with Ukraine to investigate other disturbing actions of Trump’s. Like, for example, Bolton’s claim that Trump asked Chinese President Xi Jinping for electoral help and other instances where Trump sought to use his power for personal or political gain. (Vox hasn’t seen the book in its entirety, so we are relying on reports and excerpts published elsewhere.)

As national security adviser, Bolton was definitely in the room where stuff happened, and as such was privy to Trump’s conversations with world leaders, maybe more than most. Which lends some degree of credibility to his claims.

At the same time, this is Bolton’s account, and it’s not like he and Trump parted on great terms. Bolton, a conservative hawk, didn’t always seem like the right fit for Trump’s more isolationist foreign policy approach, and the two clashed over issues like North Korea and not being able to start wars. So some of Bolton’s claims may be self-serving or tough to verify.

Of course, verifying his claims might have been easier had Bolton testified before Congress under threat of perjury.

Acknowledging that there are no heroes here, below are some of the wildest and most disturbing tidbits from Bolton’s memoir. Read them, and imagine an alternate universe where Bolton’s mustache is moving up and down as he delivers an opening statement before the House Intelligence Committee in the fall of 2019. It kind of helps.

Trump asked Xi for help with his electoral prospects

According to Bolton, President Trump brought up his reelection prospects with Chinese President Xi Jinping during a one-on-one meeting on the sidelines of the Group of 20 summit in Japan. Xi mentioned China’s critics in the US, and according to Bolton, Trump thought the Chinese leader meant Democrats. So Trump apparently thought he had an opportunity.

“He then, stunningly, turned the conversation to the coming U.S. presidential election, alluding to China’s economic capability to affect the ongoing campaigns, pleading with Xi to ensure he’d win,” Bolton writes. “He stressed the importance of farmers, and increased Chinese purchases of soybeans and wheat in the electoral outcome. I would print Trump’s exact words but the government’s prepublication review process has decided otherwise.”

Of course, Trump had already publicly asked China to investigate his political rivals back when he was already being investigated for pressuring Ukraine to do the same, so it’s not actually as bad as the other thing that allegedly happened in this meeting.

According to the Washington Post, Bolton writes that at the same meeting between Trump and Xi at the G20, the Chinese leader defended the detention of 1 million Uighurs in internment camps.

“According to our interpreter,” Bolton wrote, “Trump said that Xi should go ahead with building the camps, which Trump thought was exactly the right thing to do.” The meeting was attended only by the two leaders and their interpreters, so Bolton is relying on what the interpreter told him after the meeting.

The Uighurs, a Muslim population in China’s Xinjiang province, have been forced into so-called “re-education camps,” characterized by reports of torture and political indoctrination. A Pentagon official has described them as “concentration camps.”

Beijing has imposed repressive policies on the group and has Uighurs closely surveilled. It is a clear violation of human rights and ethnic cleansing, one Trump has at least condemned publicly.

According to Bolton, Trump was apparently surprised that the United Kingdom — one of America’s closest allies — had nuclear weapons during a meeting with former British Prime Minister Theresa May in 2018. “Oh, are you a nuclear power?” Trump said, according to Bolton.

The UK was the third country to acquire the nuclear bomb, following the US and the Soviet Union. It conducted its first successful test of an atomic bomb in 1952.

Bolton writes that Trump once asked his then-Chief of Staff Gen. John Kelly if Finland was part of Russia.

Maybe this is more forgivable when you consider Bolton also claims that at an August 2018 White House meeting, Trump “asserted that Venezuela was ‘really part of the United States’ and requested military options to invade the South American country and keep it under U.S. control,” the Wall Street Journal writes.

Trump also apparently said invading Venezuela would be “cool,” according to the Washington Post’s account of Bolton’s book.

Bolton claims that during a NATO summit in 2018, Trump decided he had had enough with the historic alliance and wanted out:

“We will walk out, and not defend those who have not [paid],” read a message Trump dictated to Bolton.

Bolton tried to stop Trump from delivering the threat, and became even more alarmed when Trump told him, “Do you want to do something historic?”

Trump had some issues with the Constitution

Bolton claims in the book that Trump told China’s Xi that Americans wanted him to get rid of the two-term limit imposed on presidents by the US Constitution.

Bolton also claims that Trump, apparently mad about leaks to the media coming from inside his administration, complained in 2019 that journalists should be jailed. Bolton says Trump said: “These people should be executed. They are scumbags.”

Meddling in Ukraine, yes, but so many other things

On Aug. 20, Mr. Bolton writes, Mr. Trump “said he wasn’t in favor of sending them anything until all the Russia-investigation materials related to Clinton and Biden had been turned over.” Mr. Bolton writes that he, Mr. Pompeo and Defense Secretary Mark T. Esper tried eight to 10 times to get Mr. Trump to release the aid.

Bolton also claimed that Trump was fine meddling in US law enforcement if it meant helping out his buddy, Turkish President Recep Tayyip Erdogan. Per the Washington Post:

“Trump then told Erdogan he would take care of things, explaining that the Southern District prosecutors were not his people, but were Obama people, a problem that would be fixed when they were replaced by his people,” Bolton writes.

Bolton says he warned Attorney General Bill Barr about Trump’s behavior at a meeting, where Barr expressed concerns about the “appearances” of Trump’s behavior, according to the Post.

Bolton, too, says that the House, by just focusing on Ukraine, committed “impeachment malpractice,” because if they focused elsewhere, Bolton claims “there might have been a greater chance to persuade others that ‘high crimes and misdemeanors’ had been perpetrated.”

If only there were someone who could have changed that.