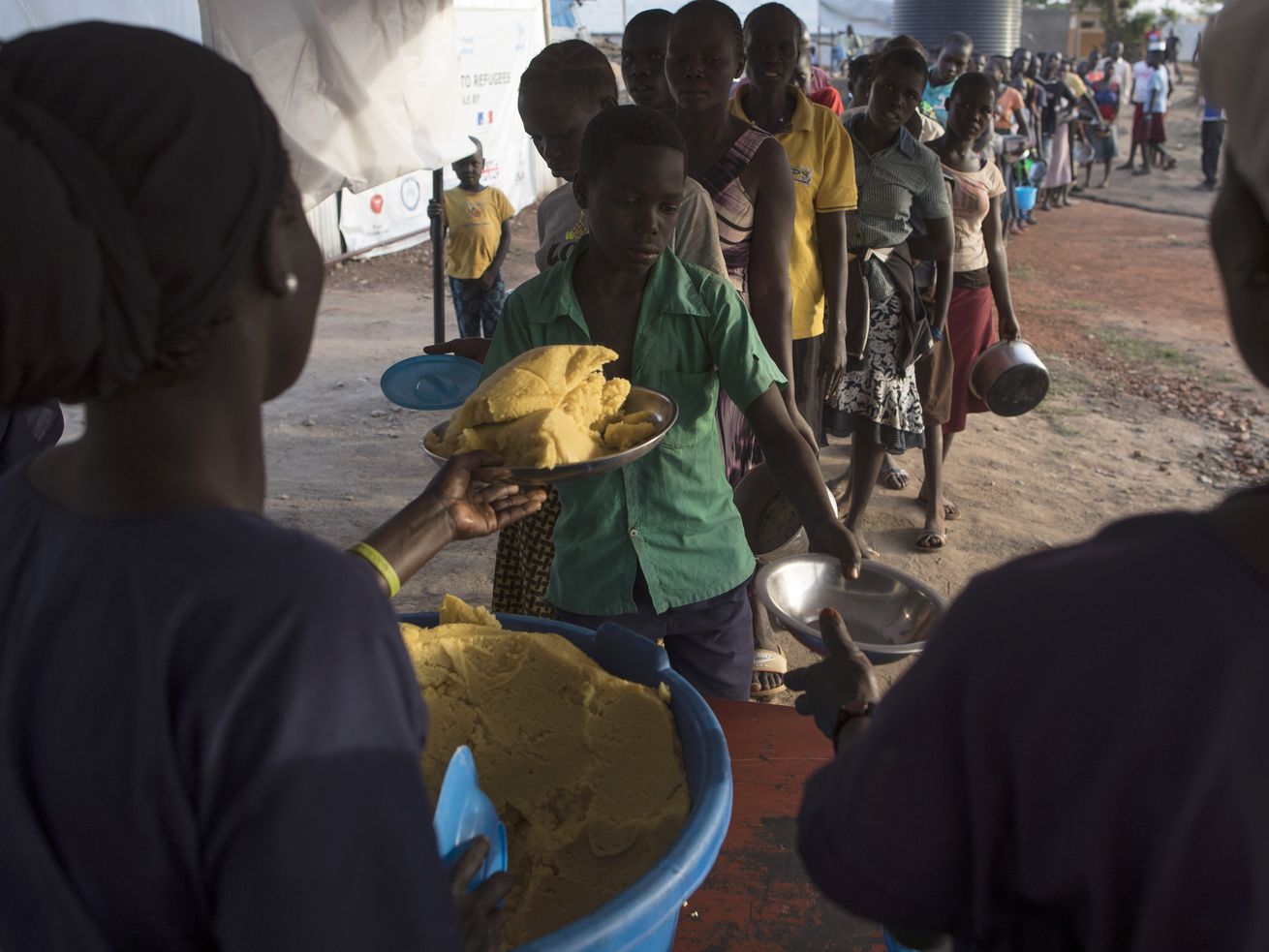 Nearly a decade on, the people who got cash weren’t earning more than people who didn’t.

I write a lot about the benefits of fighting poverty by giving poor people cash, rather than, say, giving them chickens or food parcels or water pumps. Giving cash directly to the poor is relatively easy, it respects the decisions of poor people as to how to spend it, and it avoids the central planning challenges of some other anti-poverty policies. Moreover, there is, I think, pretty good evidence demonstrating its effectiveness.

But “pretty good evidence” doesn’t mean “all the evidence,” and “effective” doesn’t mean “a panacea.” A new paper from development economists Chris Blattman, Nathan Fiala, and Sebastian Martinez complicates our picture of cash transfer programs, and suggests that the best way to think of cash is as a way to speed up poor people’s escape from poverty, rather than as the key to helping them escape poverty in the first place.

The paper is about a program in northern Uganda, which with a GDP per capita of $2,352 (compared to $59,495 in the US) is among the poorest countries on earth; the north has endured years of violence driven by a Christian terrorist organization called the Lord’s Resistance Army.

The cash-transfer intervention, called the Youth Opportunities Program, was offered in 2008 to small groups of young people. Each person in every group was given about $382 to learn a skilled trade, with the goal of becoming craftsmen — which craft exactly varied from group to group — with higher earning potential. Twists like this are pretty common with cash programs. Recipients didn’t get the cash just to, say, make it easier for them and their families to eat. The goal was to become more productive and get into higher-paying jobs that could lift them out of poverty permanently.

Groups (of 10 to 40 people each) had to apply together, and the authors note that about half the groups who applied already existed in some form, as “farm cooperatives, or sports, drama, or microfinance clubs.” Each group had to put together a written proposal, which was screened by government officials. The groups also received formal advising from “a local government employee, teacher, or community leader” who helped put together the written application, partly to help applicants who were functionally illiterate and couldn’t compile an application on their own.

The main benefit, though, was the cash. “I started off like many people, 10 to 12 years ago, never having thought seriously about people getting cash as a development intervention and thinking it was vaguely crazy or irresponsible,” Blattman told me. “Having been a 25-year-old semi-skilled person once, the idea that I could get my annual income as one big lump sum and use it responsibly … it didn’t strike me as a good idea.”

After 4 years, the program appeared to work. After 9 years, though …

But in 2012, Blattman, Fiala, and Martinez checked in on the young adults in the Ugandan program four years after the intervention, and the results were incredibly encouraging. “Relative to the control group, the program increases business assets by 57 percent, work hours by 17 percent, and earnings by 38 percent,” they wrote. “Many also formalize their enterprises and hire labor.”

The implication was that giving ambitious young people in poor countries a little bit of cash could transform their lives, propelling them into more profitable careers and even encouraging them to build businesses with other employees.

In a blog post, Blattman argued that the results suggested an answer to “one of the big questions in development: how to create jobs and speed up the shift from agriculture to industry in developing countries?” Their findings suggested that helping countries in Africa go through the rapid development process of China or India could be as simple as handing out cash. Blattman titled the post, “Dear governments: Want to help the poor and transform your economy? Give people cash.”

Now he and his co-authors have checked back in again nine years after the intervention, and the results are a great deal less promising than after four. While the people who got cash were earning 38 percent more money than the control group in year four, the control group caught up to the cash recipients by year nine. Overall income was no higher in the treatment group, and earnings were higher by a small (4.6 percent), statistically insignificant amount.

The recipients did have more assets on average than people not getting the money, which makes sense; they had a sudden influx of money, some of which was sure to go toward buying durable assets like metal roofs, fruit-bearing trees, or work tools.

“The right way to look at these results is that people were richer for a while and then they have nicer houses,” Blattman said. “Consuming that stuff makes you less poor. But I think what a lift out of poverty means is not just that you have some extra savings and a buffer, but actually that you have some real, sustained earnings potential, and that’s not what we’ve seen.”

Women who got the money also reported that their kids were healthier than women who didn’t. But overall, the study strongly suggests that the cash grant wasn’t a catapult out of poverty. It just helped people who were already going to escape dire poverty do it a little bit faster.

The optimistic and pessimistic readings

On first glance, this looks bad for cash transfer enthusiasts like me. Cash had big effects after four years but, in the long run, no effect on income. It’s not a miracle drug.

But that’s a bit too dismissive. Getting out of extreme poverty faster is a really big deal! And indeed, if you look over the full nine years, Blattman, Fiala, and Martinez estimate that beneficiaries earned a total of $665 more than people not getting the grant. So an initial grant of just $382 led to an increase in earnings of nearly twice that size. Not bad — and pretty cost-effective, in that every $1 put in by the program led to another $1.74 in benefits to recipients.

Then there’s the fact that beneficiaries were still doing better after nine years in terms of assets. “I wouldn’t underrate the asset findings,” said Amanda Glassman, chief operating officer and senior fellow at the Center for Global Development, who’s read the study. “Having those assets is also associated with higher earnings over the lifetime, and it’s possible that might be pretty important over the long term.” Blattman and his co-authors didn’t find that assets like livestock and trees were leading to a lot more income nine years out — but that could change in the future.

Michael Faye, the co-founder and president of GiveDirectly, a nonprofit charity that gives cash directly to extremely poor people in sub-Saharan Africa, emphasizes that this is one study among many. A review of the evidence on cash transfers by the Overseas Development Institute, a British think tank, wound up extracting data from 165 different studies, out of a total pool of thousands. Of those, 96 were randomized controlled trials, widely considered the most rigorous possible study design. That’s a huge evidence base, the preponderance of which shows cash works quite well, and nothing like it exists for any other development intervention besides cash.

“I don’t update [my views] much for each individual paper,” Faye said. He also emphasizes that a few other long-term papers have shown more optimistic results. An evaluation of Mexico’s Progresa cash transfer program by economists Susan Parker and Tom Vogl released this spring found that after two decades, children whose families received the transfer saw improved “educational attainment, geographic mobility, labor market performance, and household economic outcomes in early adulthood.” The children got, on average, over a year more schooling than they would’ve without the cash.

Some data in the US backs up that conclusion too. Brown’s Anna Aizer, University of Toronto’s Shari Eli, Northwestern’s Joseph Ferrie, and UCLA’s Adriana Lleras-Muney looked at the Mothers’ Pension program, the first federal welfare program in American history, which ran from 1911 to 1935. They found that male children of mothers who were accepted for the program lived one year longer, got more schooling, and had incomes 14 percent greater than children of mothers who were rejected.

Berk Özler, the lead economist for the poverty cluster of the World Bank’s Development Research Group, is a bit more circumspect. Özler has been sharply critical of GiveDirectly for being unduly boosterish and insufficiently evidence-based in its arguments for cash. He’s not anti-cash, per se — “nobody’s disagreeing that cash is good,” he told me — but he does think the new paper’s findings are a bit more negative than Faye or Glassman do.

Looking at the people who got the cash, Özler said: “You have a third that never really start a business, a third that are disinvesting, and a third that are happy to be small businesses not really growing. That’s kind of disappointing, but it’s surprising to me. I don’t really understand why this is happening.”

In his view, the positive results among that small third of the recipients who actually used their money — rather than spending it or investing it for a bit and then disinvesting soon thereafter — drove the positive findings in year four. And he’s not quite sure why that group gained, and the others didn’t.

Özler also raised the issue of spillovers. The point of the program was to get more people into skilled trades, like tailoring. But that doesn’t just affect the people getting the skills; it affects the other tailors already working in the area. “Creating 10 to 15 tailors at once in a parish of 10,000 people, it’s got to affect existing tailors,” he said. “Maybe some went out of business.” It’s hard to know whether the program is cost-effective without knowing what happened to those other tailors. If the program just made some people successful tailors at the expense of others, that’s not really a huge gain.

For Özler, this all isn’t a reason to abandon cash, but it is a reason to think harder about how to do cash. “We’re not arguing ‘cash good versus cash not good.’ Cash is good!” he said. “But the only way to give it isn’t, ‘I’ll drop 1,000 bucks on you and go away.’”

There are a lot of ways to give out cash. The hope was that the Ugandan program had found one that would set up a durable, sustained escape from poverty for beneficiaries. That doesn’t really seem to be the case. But the cash certainly helped the recipients. And it’s possible an even better-designed cash program could help more.

“We don’t want to sound too disappointed,” Blattman told me, summarizing his takeaway. “It’s still better than anything else we’d seen.”