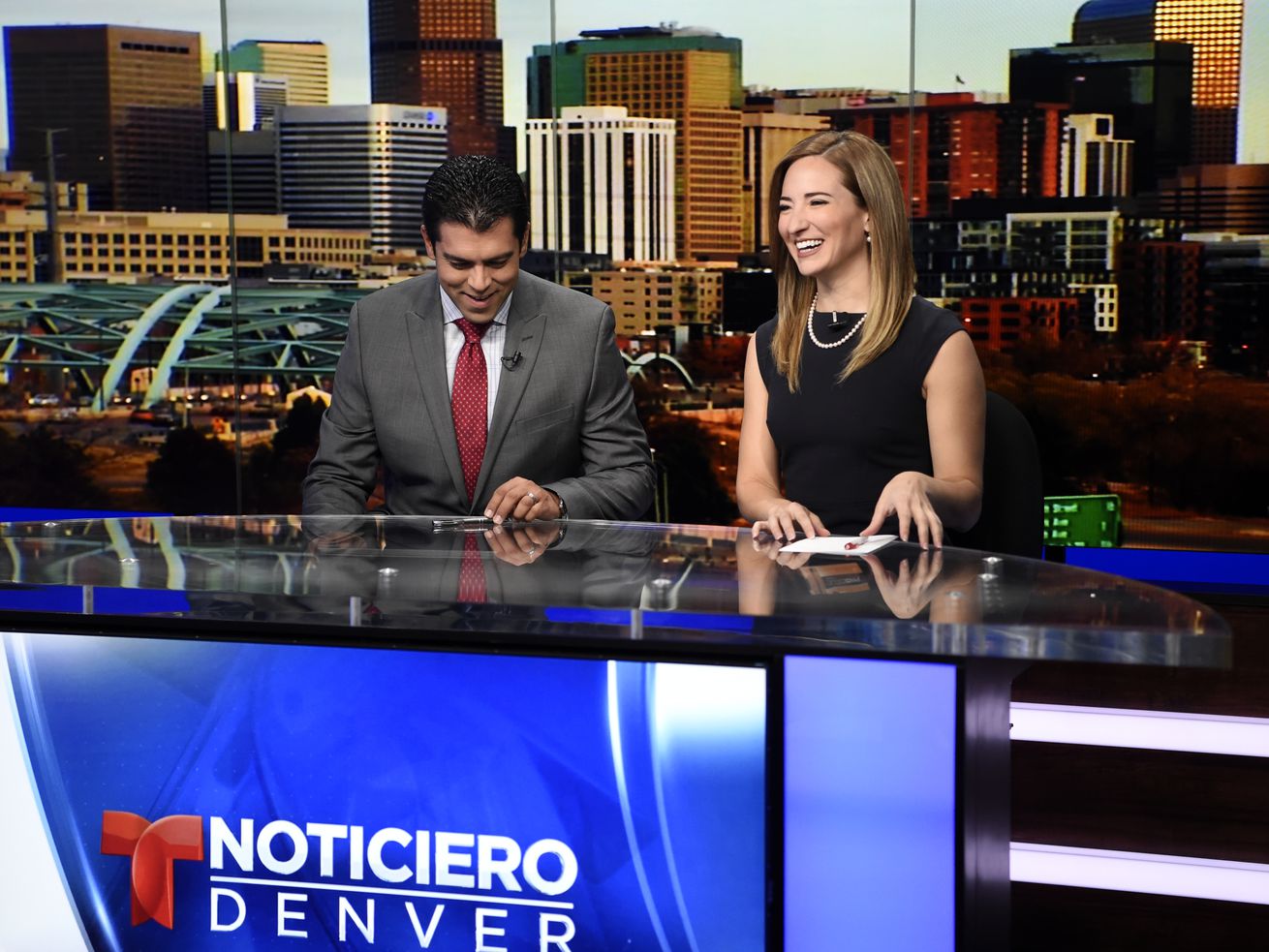 Since the Democratic debate ended Wednesday evening, the jokes have not stopped coming about the candidates who spoke Spanish onstage.

After former Rep. Beto O’Rourke and Sen. Cory Booker uttered several somewhat-broken Spanish sentences at the debate, Trevor Noah teased that it’s like “when Dad says, ‘Hola, como estas?’ to the waiter at the Mexican restaurant.” Cable news shows treated it as a curiosity. Hosts of The View rolled their eyes. “To me, it was a little bit pandering, off the top,” Joy Behar said Thursday morning on the show. Meghan McCain nodded in agreement.

The reaction was completely different on the Spanish-language news shows, however. Panelists called it a “historic” moment, saying that the Spanish language was one of the “champions” of the night.

In fact, it was the first topic discussed during Telemundo’s post-debate analysis. “We have never heard our language this much in a presidential debate,” said Telemundo anchor Felicidad Aveleyra, approvingly.

Her co-anchor, Julio Vaqueiro, agreed. “[Spanish] was the main protagonist.”

Not all panelists were on the same page, but the anchors represented the overall mood on Univision and on CNN en Español, too. And, in a sense, their opinion is the one that matters most to Democrats trying to win the Latinx vote. More than 5 million US viewers tune in each week for the primetime evening news shows on Telemundo and Univision — the two leading Spanish-language networks in the US.

Most commentators agreed that former HUD Secretary Julián Castro — who announced his run for the presidency in Spanish onstage — was the star of the night, and his stance on immigration was well-received. Talking about his proposal to repeal a section of US law that makes it a federal crime for immigrants to cross the border illegally, he said it’s time to “go back to the way we used to treat this when somebody comes across the border, not to criminalize desperation, to treat that as a civil violation.”

But it was a triumphant moment for Spanish-language media overall that three candidates spoke Spanish several times. It was also a hit with Miami viewers, noted Univision correspondent Lourdes Del Río, who attended a debate-watch party.

“Everyone liked that there were moments when people talked in Spanish, because they were speaking directly to the Latinx community, which is really important for anyone who aspires to make it to the White House,” Del Río said on the air after the debate.

“At first we were confused because we are not used to hearing Spanish on the national stage for a presidential debate,” she answered on the air. “It was an honor to be in the room and hear Spanish and realize that the candidates know that they need the Latino vote and need to do everything to win our vote.

The storied former Univision anchor Maria Elena Salinas also tweeted that it was a symbolic moment for Latinx Americans.

“The effort to speak Spanish, while not enough to win the Latino vote, is a sign of respect to our culture. Obviously the voters all speak English, they’re [American] citizens,” she wrote in Spanish on Thursday.

That gesture of respect is all the more meaningful at a time when Latinx Americans and immigrants are repeatedly denigrated by President Donald Trump’s administration.

Spanish-speaking on the debate stage began in the first hour with O’Rourke, a border native who feels comfortable speaking the language. When he was asked by moderator Savannah Guthrie if he would support a 70 percent top tax rate on the highest earners, he didn’t seem to want to answer that. Instead, he started speaking in Spanish.

His fluent Spanish, with a thick gringo accent, seemed to surprise Booker, who appeared not to want to be outdone. When asked about what he would do about the border crisis, Booker paused, then stumbled through a nearly incomprehensible answer in Spanish.

“The situation right now is unacceptable. The president has attacked and demonized immigrants. It’s unacceptable. I will change this,” he said in Spanish, speaking slowly in what seemed to be a rehearsed response.

The exchange led to many jokes and memes online:

When Dad says “Hola, como estas?” to the waiter at the Mexican restaurant #DemDebate pic.twitter.com/64FY2LV6kp

Julián Castro, the only Latino candidate in the race, didn’t seem as desperate to show off his Spanish during the debate. But at the end, he declared, with the best Spanish pronunciation of them all, “I am Julián Castro and I am running for president of the United States.”

While some found it jarring to hear Democrats speaking Spanish casually on the national stage — knowing millions of viewers would not understand — it also made sense. The candidates were speaking to a Miami audience — a key voting bloc for Democrats. About 69 percent of Miami residents are Latinx, and most of them feel more comfortable speaking Spanish than English. Democrats really, really need Florida Latinos to vote for them and flip Florida back to blue.

As Latinx Americans noted online, the candidates’ effort to speak Spanish was significant: 41 million people in the US speak Spanish, and it’s rare to be addressed on a national stage and shown that respect.

I welcome the use of Spanish in the #DemDebate.

The United States has 41 million people that speak Spanish at home, making it 2nd most spoken language of the country.

Communication is key to understanding our world and hopefully make it better.#SeHablaEspañol

People judging @BetoORourke speaking Spanish forget this is being broadcast on Telemundo. That’s called respect to a community hard hit this week/admin. #DemocraticDebate

Family, please don’t diminish how important it is that the candidates have spoken #Spanish at the #DemDebate It may not be foreign to you or this may be second nature but this is important for our community. Its important to celebrate our culture!

“Congressman O’Rourke, what would you do on the first day as president, about the reality of what’s happening at the border?” he asked.

“We are going to treat each person with the respect and dignity that they deserve as humans,” he said in Spanish.

It was the kind of answer that Spanish-speaking viewers were waiting to hear.