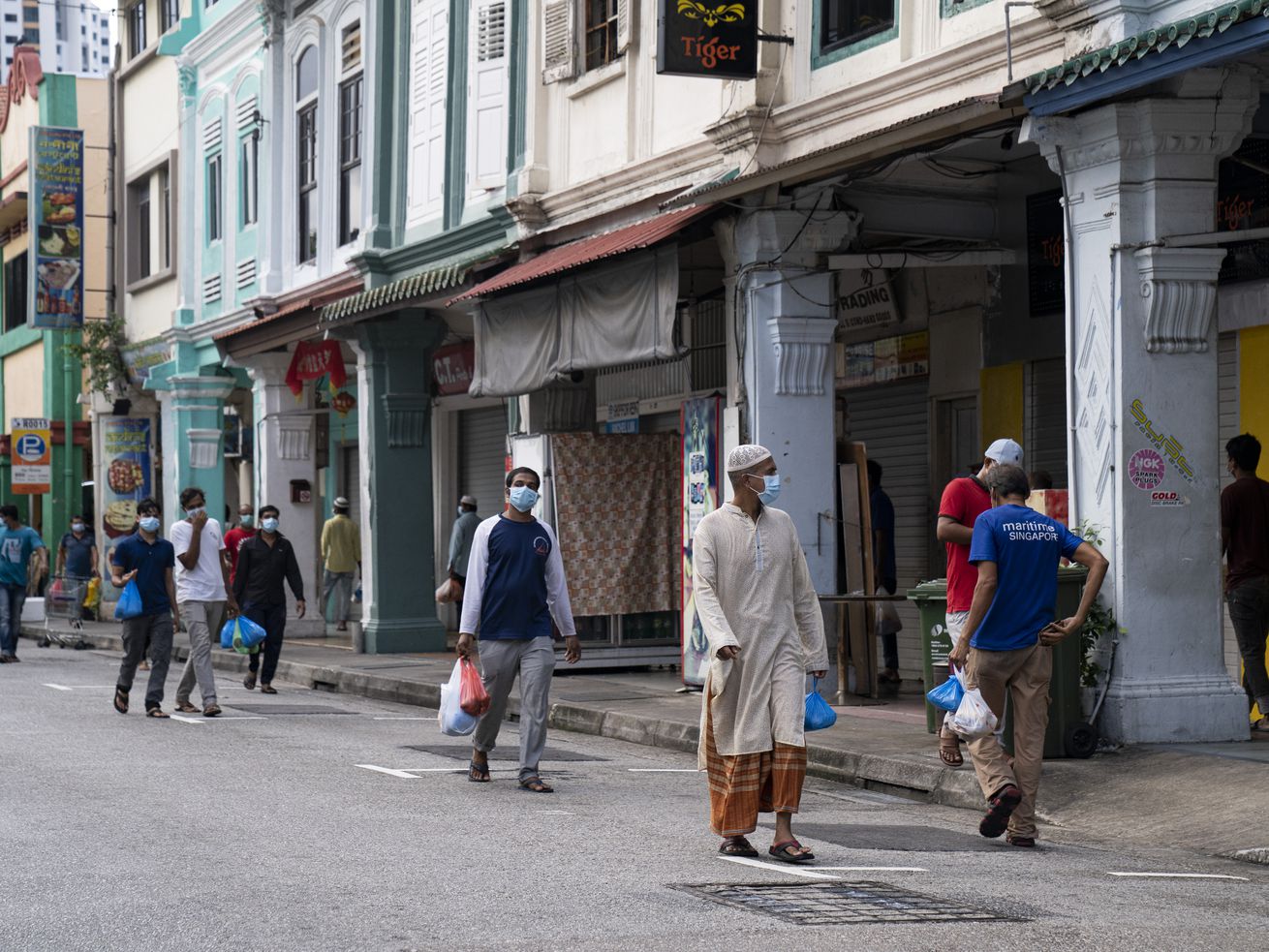 Death rates can be the byproduct of lots of testing — and a little randomness.

A friend of mine, another journalist, texts me every few days with the latest coronavirus case and death counts from Singapore. On Monday: “Singapore is now at 28k cases and 22 deaths.” I checked the Johns Hopkins dashboard on Wednesday morning to confirm: 29,364 confirmed Covid-19 cases and still just 22 deaths.

All of us are amateur epidemiologists now, and my friend’s fascination with Singapore is all about the country’s remarkably low case fatality rate. Based on those numbers, just 0.07 percent of people in Singapore who contracted the coronavirus have died from it. Compare that to the United States, where more than 6 percent of confirmed Covid-19 cases have resulted in death.

To look at it a different way, this chart compares total Covid-19 deaths per million people in both countries:

The US is trying to bend the curve. Singapore doesn’t even have a curve to speak of. What’s going on?

For starters, to return to my friend’s obsession with case fatality rates, those are a very crude metric. They are extremely vulnerable to variations in testing, because the denominators in this equation are confirmed cases — i.e. positive tests. The US and Singapore are interesting examples that show this metric’s usefulness and its limitations.

The United States is almost certainly undercounting its Covid-19 cases because of under-testing. The real infection fatality rate in the US — total deaths divided by the real number of infections, confirmed or not — is much lower than 6 percent. But it’s also effectively impossible to know the actual death rate right now because a not-insignificant number of people infected by Covid-19 don’t show serious symptoms and therefore never get tested.

Conversely, Singapore’s case fatality rate may be so low because it is testing a lot of people with mild or no symptoms.

The country has escalated its testing because of Covid-19 outbreaks in the dormitories that house many of Singapore’s low-wage migrant workers. You may recall that, by late March, the island seemed to have Covid-19 under control. Leaning on the lessons from the SARS outbreak in 2003, the country implemented a rapid testing-and-tracing program, as well as restricting travel into Singapore and requiring self-quarantines.

But then cases started to rise again — almost entirely because of infections among migrant workers, who live together in tightly packed dormitories on the edge of the city. As the second wave began to crest in Singapore in mid-April, about 90 percent of the new cases turned out to be foreign workers who were living in the dorms.

So Singapore implemented a new screening program with the goal of testing effectively every single worker living in those facilities. It is testing thousands of workers every day, whether or not they show any Covid-19 symptoms.

These people are generally young; they’ve come to Singapore to work on construction projects or in manufacturing or in the health care sector. And we know the Covid-19 fatality rates among younger people are much, much lower in general than among seniors.

So if you want to understand why the case fatality rate is so stubbornly low in Singapore, part of it is a matter of chance: The groups of people who got sick were at a lower risk of dying. But equally — if not more — important is the prevalence of testing and the country’s focus on testing these younger and sometimes asymptomatic people.

“This programme likely detected cases that would otherwise not have presented to healthcare centres for diagnosis,” Ooi Eng Eong, deputy director of the Emerging Infectious Diseases Program at the Duke-National University of Singapore Medical School, told me over email.

That inflates the total number of cases, the denominator used to calculate the case fatality rate. Singapore’s testing skews younger because of the emphasis on the migrant dorms, and the country appears to have mostly avoided Covid-19 outbreaks in its nursing homes where more vulnerable elderly people live.

“While the screening programme led to more cases being reported than if case detection was limited to those that fit the COVID-19 case definition, it also expanded the denominator in the mortality rate calculation: the number of fatal cases divided by total number of cases,” he said.

So now you might be asking why there was an outbreak in these migrant worker dormitories. It seems to have been a bit random. The New York Times reported that government officials thought somebody might have picked up the virus at a nearby shopping mall favored by migrant workers. Or they may have been infected at a construction site linked to a small cluster of cases. Or both.

Either way, once the coronavirus arrived at the dormitories, it flourished in close living quarters where as many as 20 people share a single room. The poor health coverage for migrant workers — dependent on their employers, who are eager to limit their financial liability — may also have delayed people from seeking out care, allowing the virus to fester before public health authorities were able to detect it.

This cascade of unpredictable events reminded me of a post that my colleague Brian Resnick put up Wednesday morning, on chaos theory and the inherent uncertainty of a pandemic:

There’s a simple mechanical that is helping me understand the many possible futures we face with the Covid-19 pandemic.

It’s the double pendulum, and as a physical object, it’s very simple: A pendulum (a string and a weight) is attached to the bottom of another. Its movement is explained by the laws of motion written by Isaac Newton hundreds of years ago.

But slight changes in the initial condition of the pendulum — say it starts its swing from a little higher up, or if the weight of the pendulum balls is a little heavier, or one of the pendulum arms is a bit longer than the other — lead to wildly different outcomes that are very hard to predict.

As Brian points out, the coronavirus pandemic is even more complicated than the double-pendulum model. It makes the future very difficult to predict.

And so it’s difficult, if not impossible, to isolate one ingredient that explains why the death rate in the US is so much worse than it is in Singapore. We still don’t have a very good idea of the real infection fatality rate, though the best estimates over around 1 percent or a little lower. And the case fatality rates, as shown by the United States and Singapore, can vary widely depending on how the pandemic has played out in different places.

But that doesn’t mean we know nothing. And the Singapore example does conform to certain expectations we already have for the disease.

Singapore can be thankful that its worst outbreaks have been in dorms full of young workers instead of nursing homes, as we’ve seen in the United States and Europe. Some credit is also certainly due to the testing-and-tracing programs, the travel restrictions, and Singapore’s strong health care system (disparities for migrant workers notwithstanding).

Some of these things could be applicable in America: The country could do better testing and tracing, and it could build a stronger health system. The US does have a relatively young population compared to other countries and so more testing could potentially reveal a more widespread outbreak — and, paradoxically, a lower death rate — than the current data suggests.

But the coronavirus has already infiltrated nursing homes in the US. It is little comfort to seniors and their families, nor to younger people who have gotten very sick or died, to know that the fatality rate may be closer to 1 percent (or lower) than 6 percent if only we tested younger people and found people who have been infected but have no symptoms or mild ones. Bad luck and a poor initial response have already distinguished America’s outbreak from the one in Singapore.

Every country’s coronavirus experience is a reflection of factors both within its control and then chaos and random luck that nobody, not even Singapore, can control. The same is true of every individual’s risk, a convoluted mess of their race, age, economic status, preexisting medical conditions, and biology that science is only beginning to understand.

I do plan to send this article to my friend. I hope it provides some insights into his question. But I don’t expect it to be entirely satisfactory either. There is simply too much uncertainty for that.