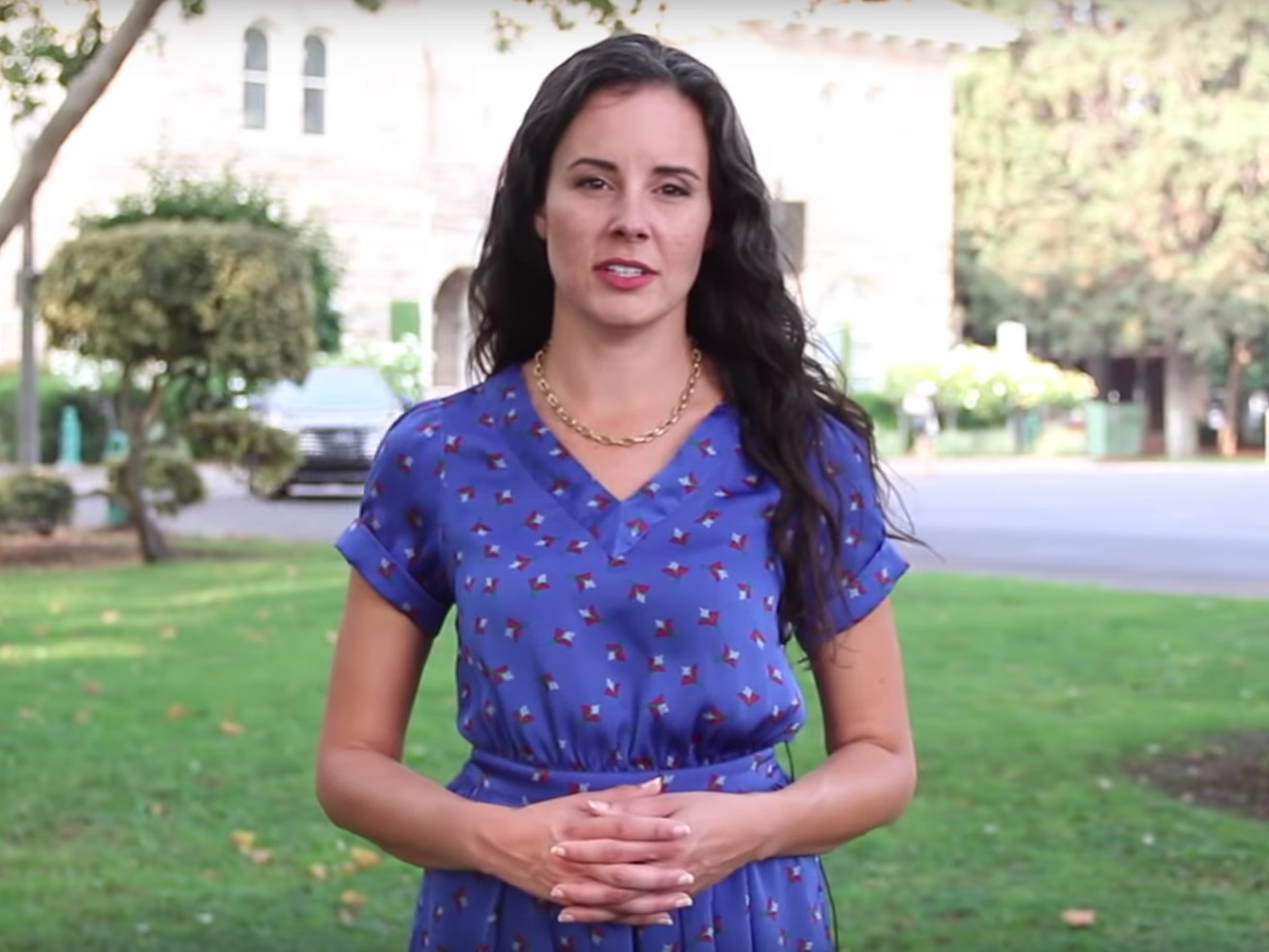 California lawmaker Rachel Hundley made a video calling out her harassers.

Rachel Hundley’s political career was a success story. The lawyer and former food truck owner was elected to the city council in Sonoma, California, at just 31 years old, and two years later was appointed mayor.

But when Hundley ran for reelection this year, she became the victim of a sexualized smear campaign: Photos of her clad in underwear at Burning Man were posted on a website called “Rachel Hundley Exposed,” according to the Press Democrat, a local newspaper. On August 13, Hundley received an email with a link to the website and a threat that more revelations would follow unless she dropped out of the race.

Hundley didn’t back down. Instead, she released a video last Monday calling out her harassers for slut-shaming her. “For too long, it has been seen as okay to control women by dictating what is acceptable for us to wear, say, and do,” she said. “I am here today to tell my faceless bullies that I cannot be shamed into quitting, because I am not ashamed.”

Since then, she has gotten support from Sonoma and around the country, including a new wave of campaign volunteers, according to the Washington Post.

Hundley is not the first female candidate to be harassed online. Her story is a reminder that in an age when trolls routinely scour social media looking for information they deem compromising, the wave of women running for office in 2018 face unique risks.

When Hundley was the victim of harassment, she decided to push back

Hundley, now 35, was elected to Sonoma’s City Council in 2014, beating a 16-year incumbent. In 2016, she was appointed mayor by the city council for a one-year term. A 2017 Washington Post profile identified her as one of a new generation of young leaders around the country.

But after Hundley announced her campaign for reelection to the city council (she is no longer mayor), she received an anonymous email to her personal account. “We believe your behavior is immoral and unethical and has no place in our Town,” the message, signed by “Citizens for Peace and Cooperation,” read. “Sonoma needs moral and ethical leadership our children can look up to, and our community can trust. You do not measure up.”

The website linked in the email included photos of Hundley at Burning Man that she had posted on social media, along with claims that she engaged in “lascivious, drunk and drug addled behavior.” Hundley must be removed “like cancer,” said the website, which is now offline.

Hundley reported the site to state and local authorities. And she decided to respond to the website’s creators publicly. “Instead of challenging me on my votes, this website relies solely on unfounded accusations and slut-shaming,” she said. “Its purpose is to make me afraid, to silence another strong female voice by scaring me out of this election and denying you the right to make a choice.”

Hundley is far from the only female candidate to receive sexist harassment. When she ran for Congress in 2016, Erin Schrode got rape threats and anti-Semitic attacks, including pictures of her face photoshopped into a Nazi lampshade, reports Maggie Astor at the New York Times. And even though Schrode lost her primary, the abuse continues to this day.

When Kim Weaver, a Democrat, challenged Rep. Steve King (R-IA) last year, the neo-Nazi website Daily Stormer published an article about her, and a friend in the German government called to warn her about a threatening conversation on a message board, Astor reports. Ultimately, Weaver dropped out of the race, but King suggested she’d invented the threats. “Democrats drove her out of the race-not R’s,” he tweeted. “Death threats likely didn’t happen but a fabrication.”

On the contrary, female leaders and candidates around the world say threats and abuse are all too real. In a small 2016 study of 55 female lawmakers outside of the United States, conducted by the Inter-Parliamentary Union, more than 20 said they had been threatened with death, rape, beating, or abduction. “Once, over a period of four days, I received 500 threats of rape on Twitter,” said one of the participants, according to the New York Times. Another said a threat to kidnap her son included the name of his school.

While male candidates and lawmakers can also be victims of violence and threats, women are disproportionately targeted for specific types of harassment. “Threats of sexual violence are almost exclusively directed toward women in these trolling moments,” political scientist Richard Fox told Politico. “Describing body parts are mostly directed toward women.”

The problem is serious and pervasive enough that programs that train female candidates are beginning to offer training in how to handle it. The group VoteRunLead recommends that candidates who experience harassment report it to police if they fear for their safety, but also use humor where appropriate to make fun of sexist attacks, and consider writing about the experience in an op-ed, Emma Margolin reports at Politico.

There’s some evidence that the prospect of harassment may deter women from running for office. Fox and his co-author, political scientist Jennifer Lawless, have found that women are more likely than men to be dissuaded from running by the possibility of a negative campaign, and by the potential loss of privacy involved in becoming a candidate for public office, Margolin reports.

But #MeToo might be changing things. The movement may have made women more comfortable speaking out about abuse on the campaign trail, Andrea Dew Steele, the president of Emerge America, a group that trains Democratic female candidates, told Margolin. “So often women have said, ‘Oh, that’s part of the deal,’ and as candidates they’ve said, ‘Oh, that’s part of the deal.’ That’s not the case anymore.”

Hundley, for one, was not interested in accepting harassment and shaming as “part of the deal.”

“Much to the disappointment of my anonymous bullies, I will not be giving in to threats,” she says in her video. “This year, I will be running not only for the future of our city but for every woman and man who has been shamed for being themselves.”