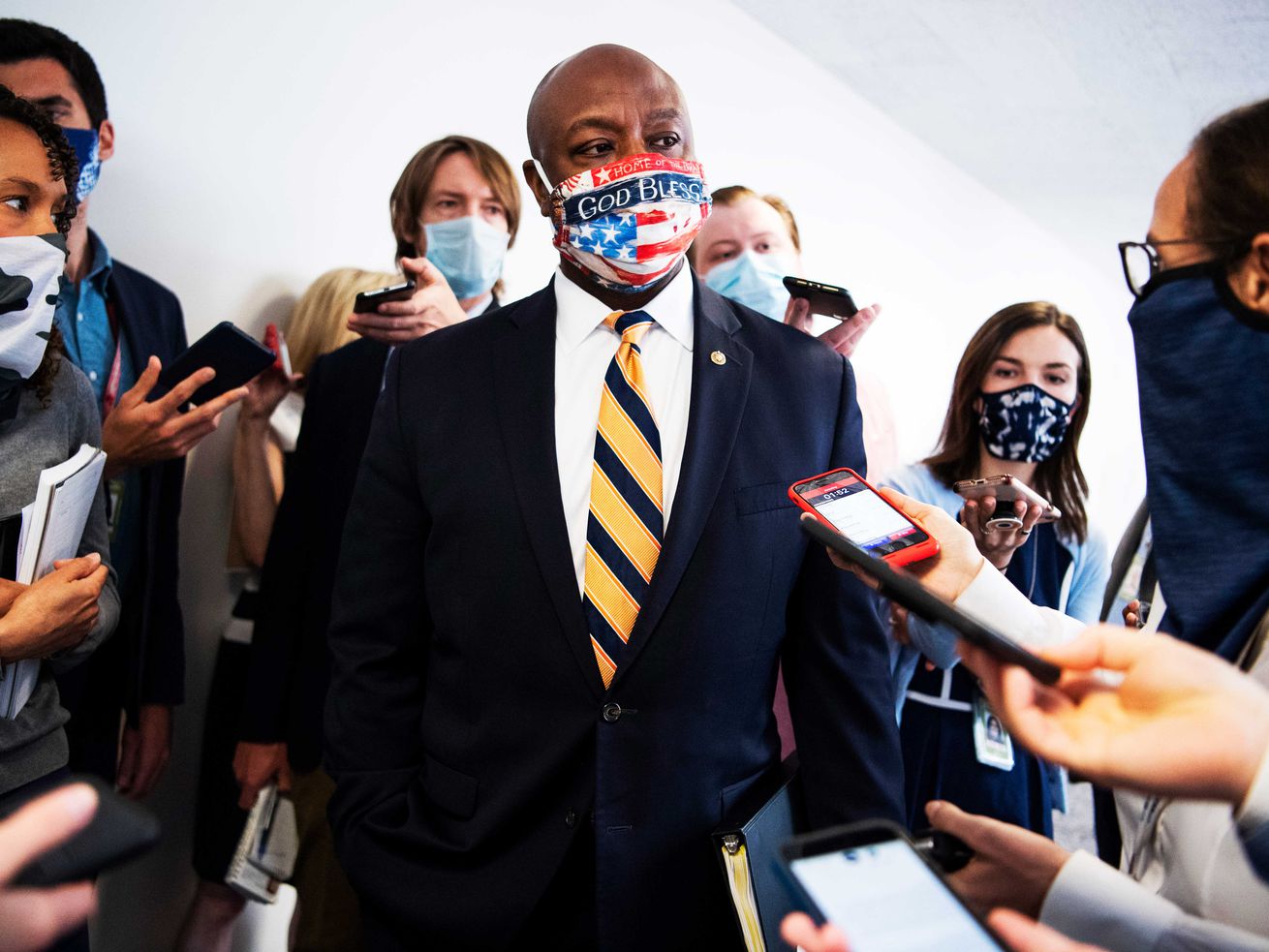 It overlaps some with Democrats’ proposal — but is much more focused on data collection.

Senate Republicans — after wrestling with their next steps on police reform — have now unveiled a measure on the subject, and it’s substantially narrower than what House Democrats proposed last week.

The bill, which is led by Sen. Tim Scott (R-SC), the only black Republican member of the Senate, is focused on a few key tenets: It aims to improve data collection about police use of force and “no knock” warrants, calls on state and local police stations to document police misconduct, and directs the Justice Department to establish deescalation guidance. While some provisions overlap with what Democrats have introduced, like the focus on documenting police misconduct, the scope of the bill — dubbed the JUSTICE Act — is notably more limited than that of Democrats’ Justice in Policing Act.

Among the differences: Both Democrats and Republicans seek to condition federal funding to state and local agencies on banning chokeholds, for example, but Republicans stopped short of imposing a federal ban on chokeholds. Additionally, the GOP bill does little to curb “qualified immunity,” a change in Democrats’ proposal that would make it much easier to hold police officers legally accountable for misconduct. Scott has said in the past that while some Republicans are open to considering it, such a move is a “poison pill” for many GOP members.

Democrats, who have gotten their own pushback from activists interested in more ambitious policy changes, are concerned that Republicans’ efforts don’t go far enough. “I worry in this moment that we’re going to repeat history … more studies, more nibbling around the edges,” Sen. Cory Booker (D-NJ) said during a Judiciary hearing on Tuesday.

While Democrats’ proposal on police reform offers a broader slate of changes, it’s still a significant departure from activists’ calls to “defund the police,” a push that would drastically reduce funding for police departments and shift that money to other social services like education and food aid.

Scott said he thinks his proposal could ultimately accrue bipartisan support and pass both chambers. Democrats’ legislation isn’t expected to have any trouble getting through the House, but it’s already hit a roadblock in the Senate, where lawmakers have written it off as a liberal wish list.

“The House version is going nowhere in the Senate,” Majority Leader Mitch McConnell said Tuesday. President Donald Trump has yet to endorse the Republican or Democratic proposal.

“We believe that our policy positions are one that brings the communities of color into a position of stronger understanding and confidence in the institutions of authority,” Scott said Wednesday in a press conference. “And we believe that it brings our law enforcement community to a place where they have the resources necessary to deescalate some of these situations.”

As both the Democratic and Republican bills acknowledge, there are limitations to federal policy on policing since so many law enforcement agencies operate at the state and local levels: “Almost all policing is done at the local and state, not federal, level; out of the nearly 18,000 law enforcement agencies in the US, a dozen or so are federal,” Vox’s German Lopez has explained.

Both bills deal with this dynamic by leveraging federal funding as a pressure point, and use it as a means of influencing the actions of regional departments.

Despite such similarities, though, the Democratic and Republican measures have many key differences that still need to be resolved, prompting questions over how likely either option is to move forward. Both chambers are due to vote on legislation soon: The House will mark up Democrats’ bill on Wednesday and vote on it next week, while the Senate will vote on the Republican bill next week as well.

Right now, in the wake of weeks of protests that followed the police killing of George Floyd in Minneapolis, there’s immense public pressure on lawmakers to get something done on police reform. But there’s been pressure on Congress before — think gun control in 2018 — only for differences among lawmakers to thwart progress.

What the Senate Republican bill includes

The Senate Republican bill overlaps some with what Democrats are interested in seeing, but does not include the broader changes they’ve envisioned. Areas where the two measures have common ground include support for police body cameras and the classification of lynching as a federal crime.

Places where it falls short, according to Democrats, include the focus on gathering data about no-knock warrants in drug cases, instead of an outright federal ban, as well as the limited legal recourse it would provide for victims of police misconduct. Here’s a rundown of some the JUSTICE Act’s key provisions:

If a state doesn’t compile such reports, it would be subject to a reduction in the funding it receives from the federal government.

The legislation uses federal funding to incentivize state and local police to ban chokeholds except when deadly force is authorized. Such bans have already been supported by localities across the country including, most recently, Minneapolis. Unlike Democrats’ proposal, the JUSTICE Act does not include a federal ban on chokeholds.

Activists have raised questions about the impact of such bans overall: Despite the New York Police Department banning chokeholds in 1993, police using the method killed Garner in 2014.

This bill does not create a national registry of police misconduct, and instead asks state and local departments to maintain clear records of officers who have faced disciplinary action.

There are limitations to the cameras’ efficacy, however: During the police shooting of David McAtee in Louisville last month, officers’ body cameras were off. And in several past cases, body camera footage hasn’t been sufficient evidence for juries to decisively convict officers of misconduct.

While the House and Senate have respectively passed their own legislation that would do so, the two have yet to approve one bill and get it signed into law. This bill would guarantee that lynching — described by Rep. Steny Hoyer as “the premeditated, extrajudicial killing by a mob or group of people to instill fear” — would be treated as a federal crime. It would also classify conspiring to commit civil rights offenses, such as a hate crime, as a lynching.

There’s still a lot of uncertainty about a compromise bill

The likelihood of a compromise is uncertain right now, though ongoing public pressure could play a significant role in keeping the heat on lawmakers in both parties.

According to a Reuters/Ipsos poll from last week, a majority of Americans back several of the reforms pushed by Democrats, including the ability to end qualified immunity and make it easier for people to sue police for damages. In that survey, 60 percent of Republicans said they supported a process that would enable “victims of police misconduct to sue police departments for damages.”

“Public opinion always puts pressure on them to do something,” Republican pollster Ed Goeas told Vox. “Bottom line is I’m very encouraged because everyone is listening to all this different input and that’s what you need to move this problem forward.”

In the past, however, lawmakers have stalled on bills despite such scrutiny. After the mass shooting at Marjory Stoneman Douglas High School in Parkland, Florida, in 2018, for example, Democrats and Republicans proposed multiple gun reform bills regarding both background checks and “red flag” laws, many of which foundered.

Trump’s position on these reforms is also still somewhat unclear. While the president has introduced an executive order on police violence, he hasn’t outright backed any legislation. His measure, which was also unveiled earlier this week, includes the creation of a national database for police misconduct as well as a policy that would incentivize a ban on chokeholds at the state and local level, unless an officer’s life was threatened.

“He is engaging now in a way that’s constructive and helpful,” Scott said on Meet the Press last weekend.

The JUSTICE Act, for now, serves as a marker of Republicans’ initial positioning on this subject. In the face of voter sentiment and Democratic blowback, it’s unclear whether that will change.